People are reading
You are at:Home»Restaurants»Restaurant 42 in White Plains: Hudson Valley Restaurant Week 2011

Todd Matthews reporting in on Restaurant 42. The space and view at 42, atop the Ritz Carlton in White Plains, is stunning. The feeling is open, clean lines, and very “Piet Mondrian” in style. It is an ambitious space demanding astute waitstaff and a dining experience that should not disappoint.

Panoramic views including the Manhattan skyline make it feel that you have gone away on a mini vacation – – high above the hubbub of daily routine. Arriving for lunch, the restaurant was still preparing for service with the washing of windows, a vacuum touch-up, and a gracious apology; but the wait was tempered by the beautiful aesthetic. 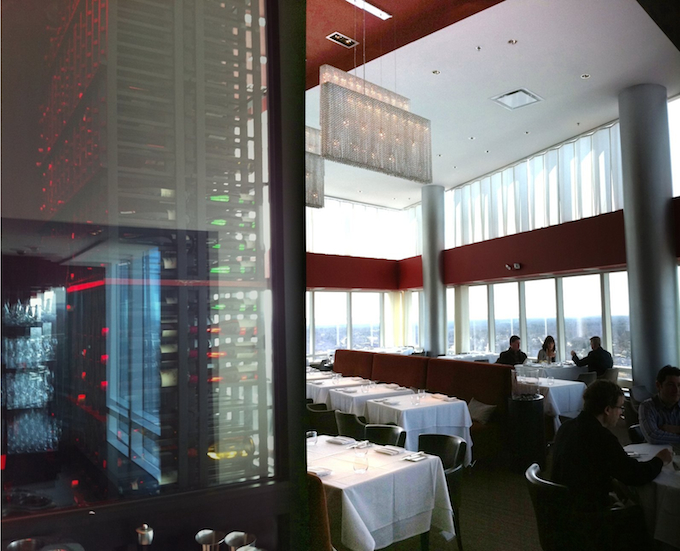 Once seated, we selected a platter of cold antipasto to begin the experience. Tender and fresh bocconcini, typically drizzled simply in olive oil, were seasoned well – – a pleasant surprise. Joining the mozzarella were delicious roasted peppers, marinated olives, smoky grilled thin strips of zucchini and my favorite, a Sicilian caponata with a sultry hit of cinnamon. 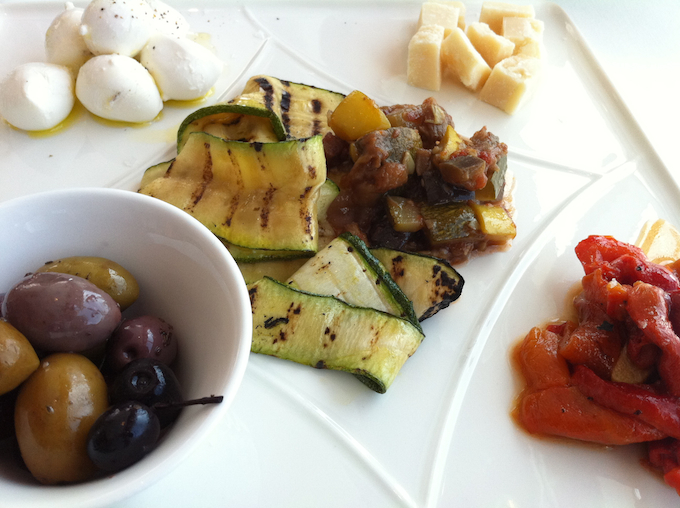 Accompanying the crusty bread and creamy butter was a plate of various salts. Fleur de Sel, a Red Salt from Hawaii, Black Salt, and an interesting Smoked Salt which prsented just a subtle kick of heat. 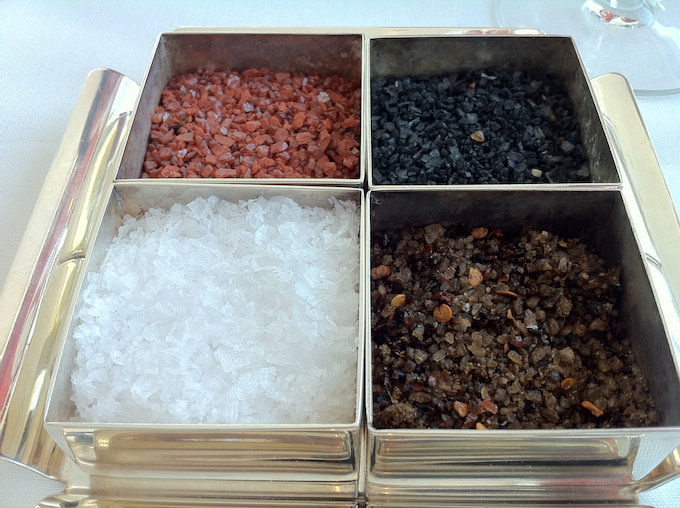 Although the antipasto was a supplement to the menu and wanting it as a pre-cursor to appetizers, they arrived at the same time. Apps however, were straightforward and tasty.

A Caesar salad of artfully sculpted romaine with dressing consisting of a garlicky punch, Parmigiano Reggiano and croutons, was cool, crisp and satisfying. 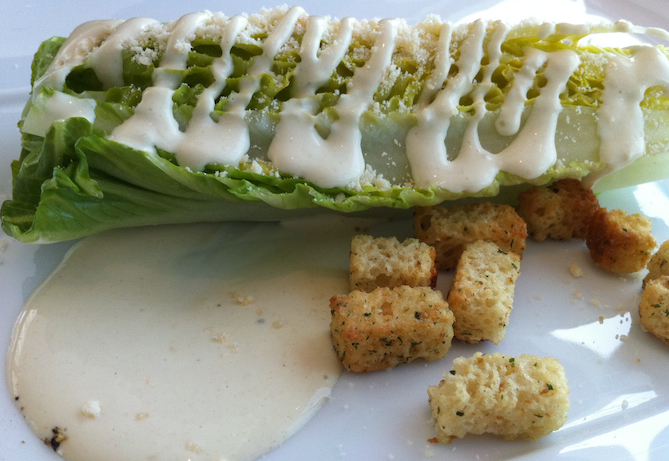 Salmon Tartar proved to be a favorite with a spicy but not overwhelming kick of jalapeño, sesame seeds, and a touch of pungent Korean kimchi, topped with sprigs of watercress. There was much going on in such a small area of food – – but it worked. 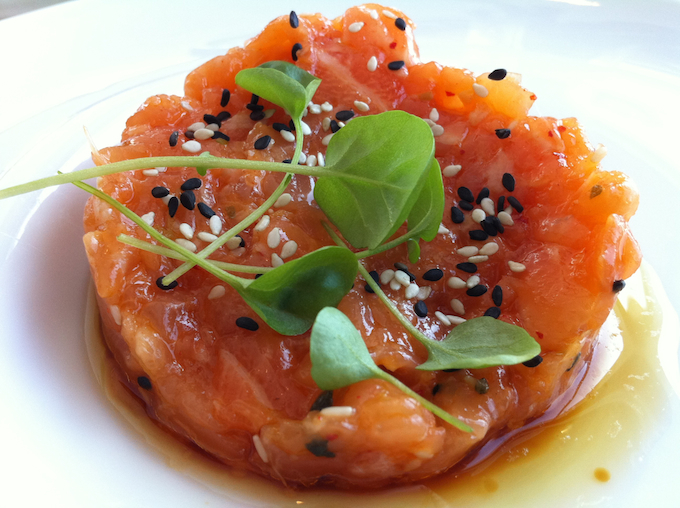 Thick and slightly smoked Country Lentil Soup was warming. Bits of caramelized onion and a presence of potato gave it a hearty feel. 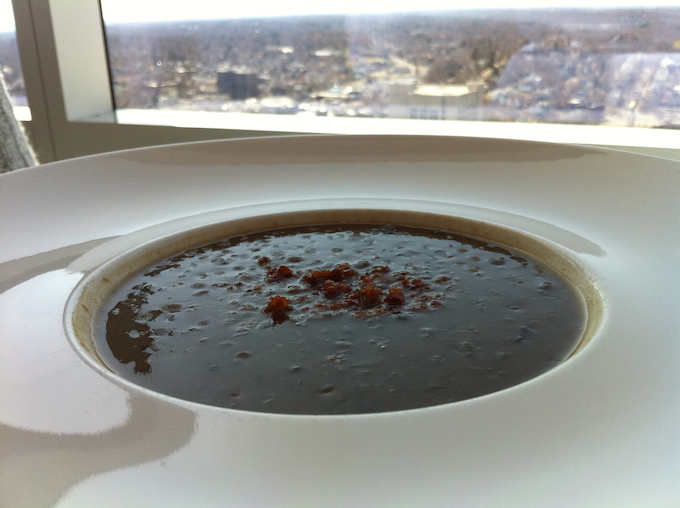 The menu offered a “Chicken Pizza”. Not fully described, it arrived not as one might expect. It was whimsical and creative. There is no crust here. The breast is made into a paillard becoming the “crust”. Then, this pizza is topped with shredded mozzarella, a stew of tomatoes and crisp arugula. Fun to eat. 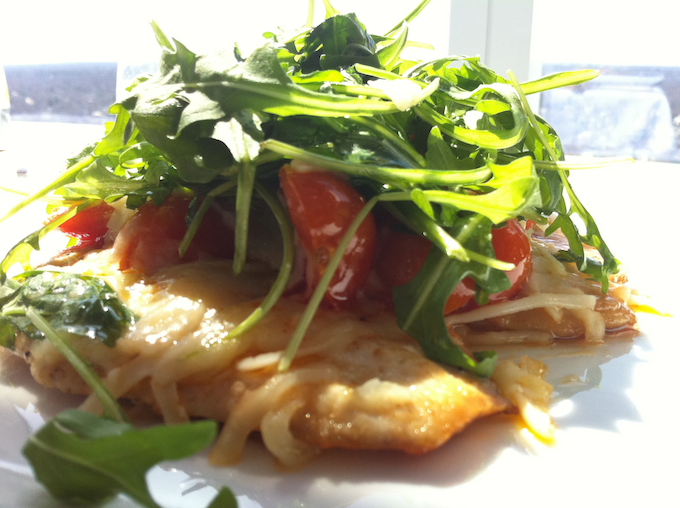 In the world of red meat, I love a great skirt steak and the fact that it was prepared in the Argentine style with a sauce of chimichurri made this guy one happy diner. Grilled medium rare and served with a light offering of mixed vegetables made the steak a star ready for its close-up. 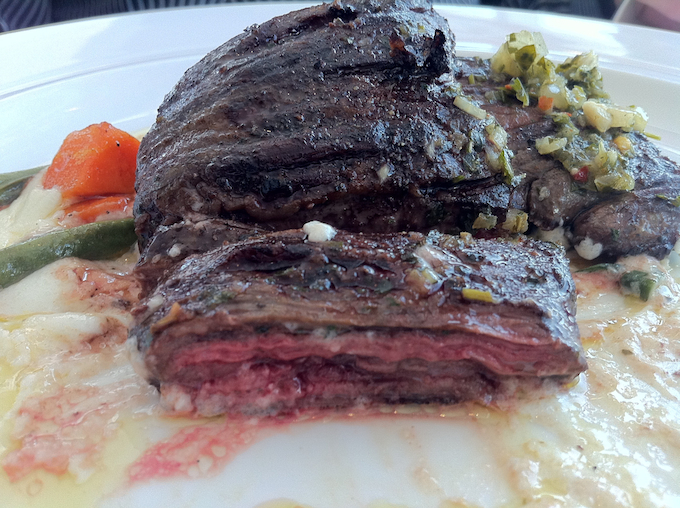 A very decent portion of salmon was served. Typically skin down, this was on top. Crispy, allowing the underside to soak up the juices of the cabbage braised in red wine and potatoes smashed with an ever so slight essence of balsamic vinegar. 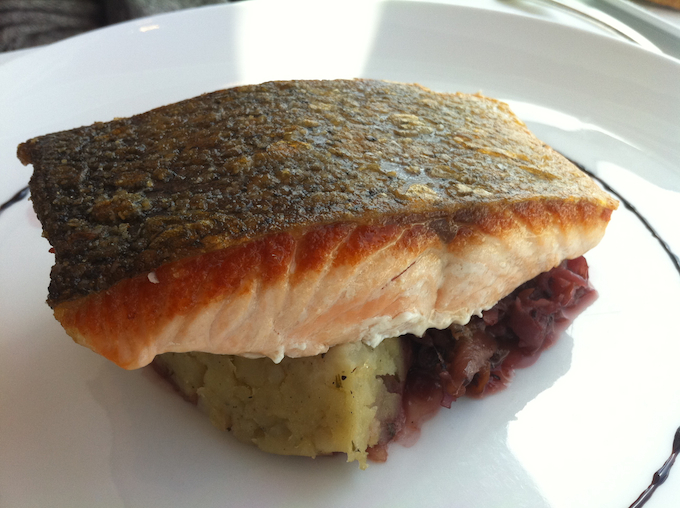 A bowl of Pennette Putanesca could have been a bit more al dente. It arrived with the customary olive and cooked-down tomato elements standard to this dish, though lacking spiciness. A real treat here was the addition of halved caper berries. 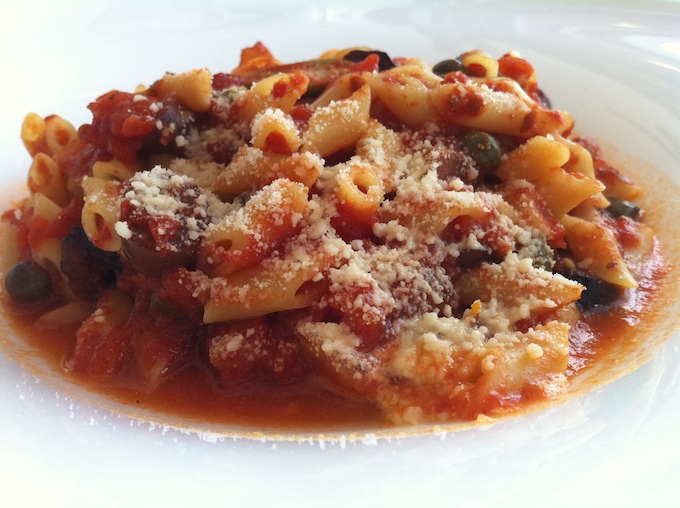 Portions were ample and by the time dessert rolled around we forced ourselves to partake and there was not disappointment. A Strawberry Crostata (think tart) was light with a substantial crust supporting the berries. 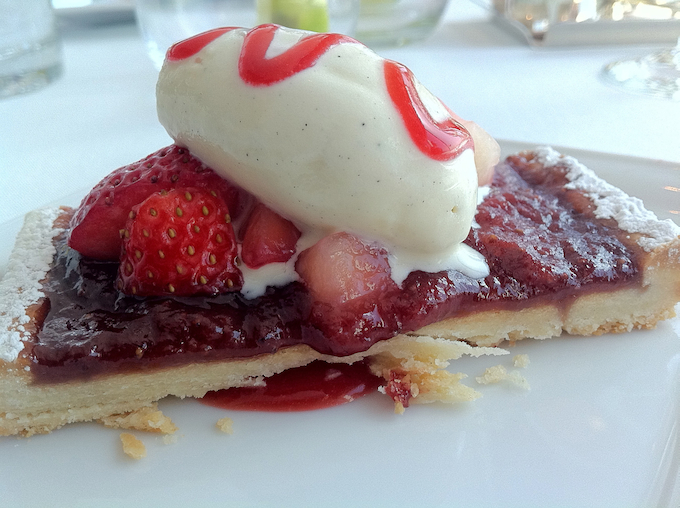 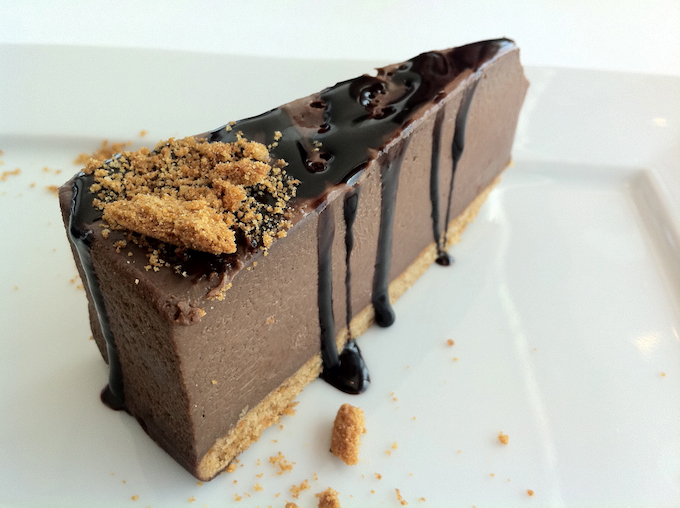 Finally the fruit salad adorned with a quenelle of grapefruit sorbet was light and refreshing. 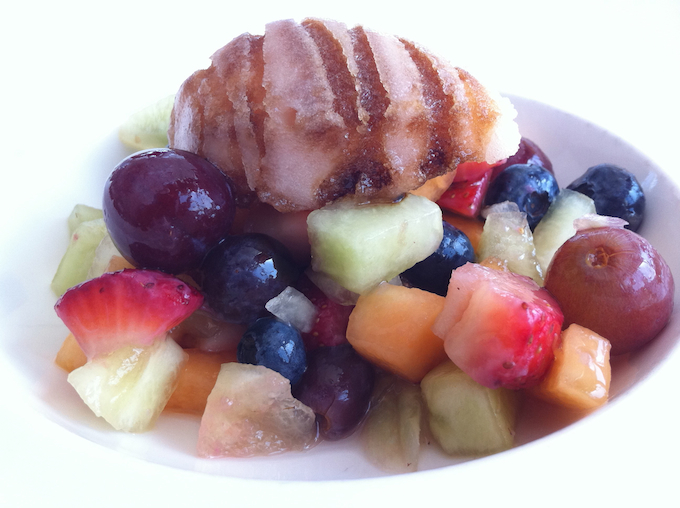 Throughout the meal, there was always something for everyone. The wine list and bar mixology were replete with options. 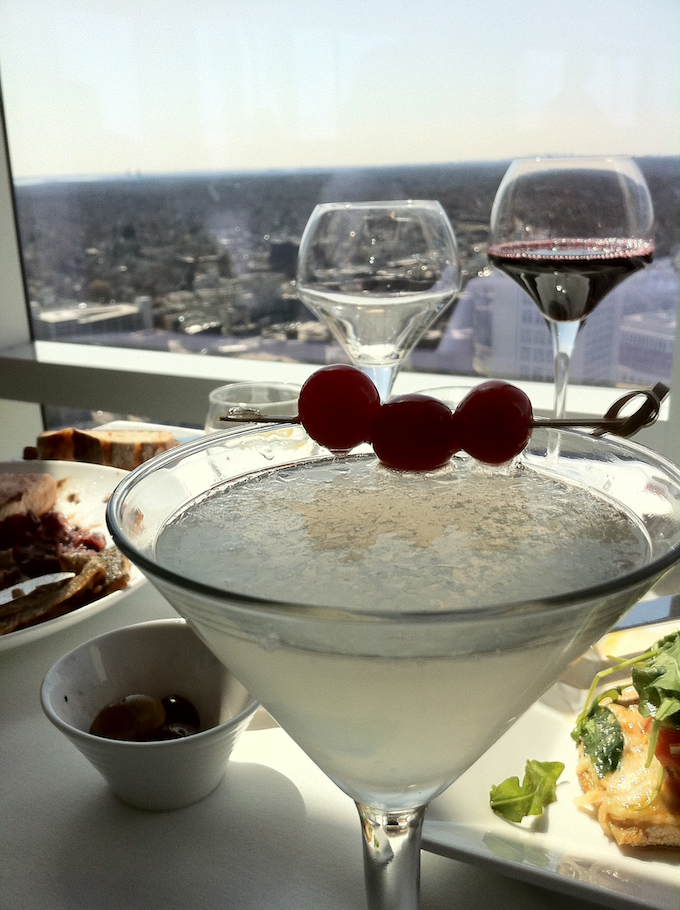 The cappuccino? Well, this was just love in a cup. 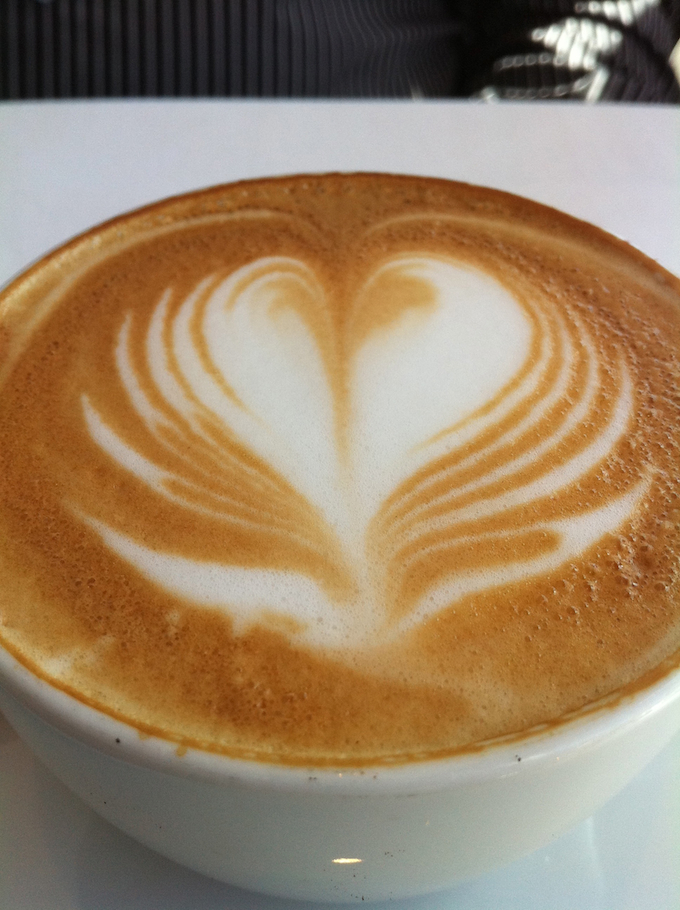