People are reading
You are at:Home»Restaurants»The Division Street Grill in Peekskill: An Eco-Best Approach to Hudson Valley Restaurant Week

Hi. Kate Shea Kennon again. During this Restaurant Week, marked an abundance of short ribs, the Division Street Grill makes a welcome contribution to the sustainable seafood discussion. The Peekskill restaurant offers Barramundi Filet in a white wine glaze as one of the entrees on its prix-fixe menu. Barramundi is a fish becoming more well-known, more widely available, and efforts are being made to dodge the farmed salmon problem which contain both environmental and health issues. 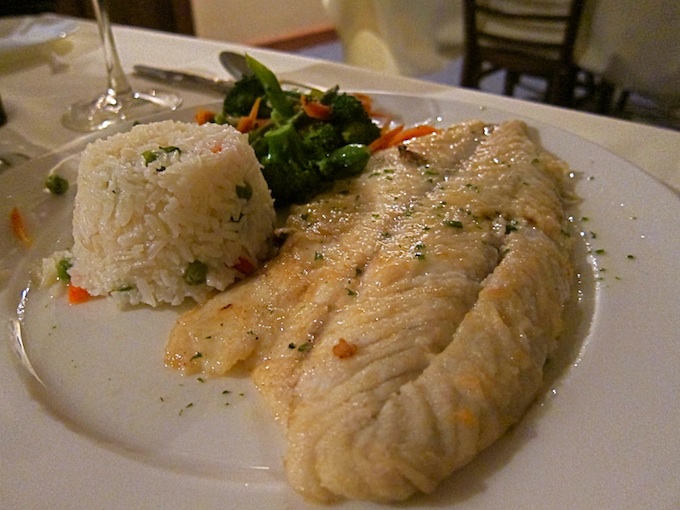 According to the Monterey Bay Aquarium, the barramundi is a best choice when it is farmed here in the United States. When the fish is from Australia, as was the Grill’s entree, it is still a “Good Alternative.” An ideal candidate for aquaculture, the barramundi thrives in responsible, fully-recirculating systems. However, barramundi that is raised in Indo-Pacific in open-net or pen farms are to be avoided, so it is important to ask the server where the fish originated. Incidentally, the Aquarium has a great new iPhone app that helps make sense of all this tableside.

And speaking of the table, let’s go back to The Division Street Grill! The true test of a restaurant kitchen is a Saturday night during Restaurant Week. During the mad crush of a week-end night, the popular Peekskill restaurant presented some outstanding dishes in the face of a packed house and some considerable lag time between courses.

By our own request, we sat in the back of the crowded house, partly to give a larger party the six-seat that was originally offered us and partly to gain some distance from the piano. Not that we don’t like music, mind you, but Grill is a small house for a grand piano. With full tables and a musician, we needed some quiet to address the situation at hand – serious food talk! But the catering room, which was opened for the surplus crowd, is an unremarkable room with industrial carpeting and immaterial decor on the walls. Preferable: the charming main room with the striking entrance and the rough-hewn wooden bar.

Having two dinner companions, we were able to try all the dishes offered during this time – unique opportunity to try foods we might not usually order. Of the three appetizers, a soup (white bean), a seafood crepe (singular) and an oven-roasted Pear Salad which was the most successful of the three dishes. Containing pistachios, goat cheese, warm pears and topped with an apple cider vinaigrette, the salad was a nice balance of freshness from the greens and zest from the goat cheese and the dressing. 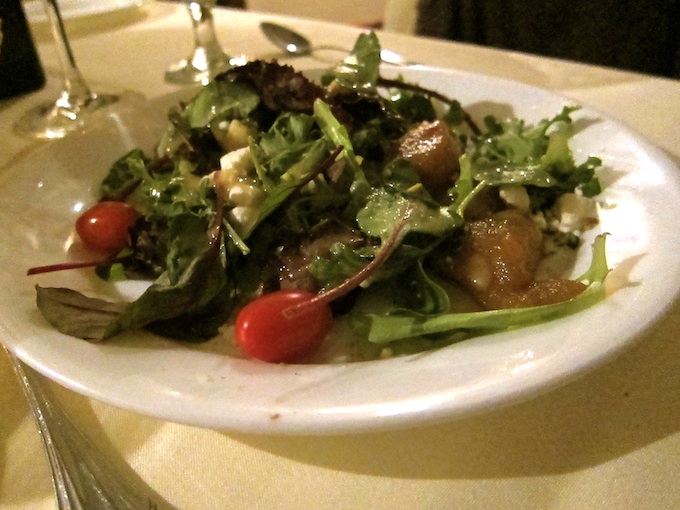 For my friend, the main course was a sauteed breast of chicken with mushrooms, sun-dried tomatoes, tarragon, dry vermouth and white truffle. Truffles (and lectures about the environment) aside, the most impressive of the three dishes was the boneless braised short ribs with a red wine reduction. A simple, winter dish, it was still the most flavorful and welcome on a day like today when winter refuses to acknowledge that it should stand aside for spring. 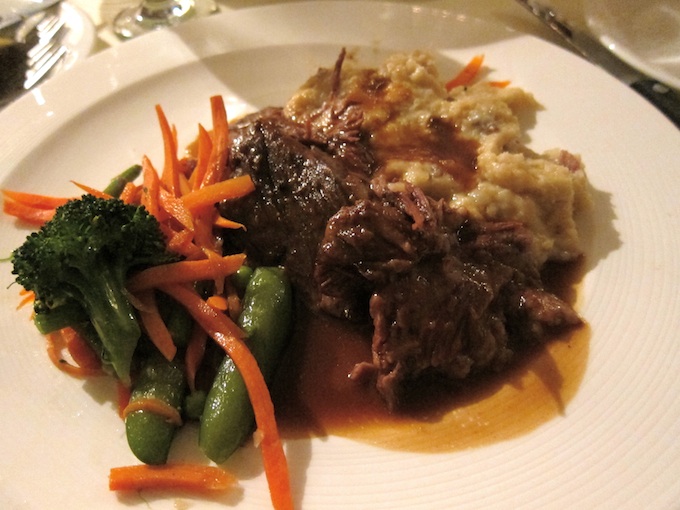 The all-important dessert course was stolen by the warm Apple Crisp which was exactly as described, a pleasantly crunchy dessert with a complementary scoop of cold vanilla ice cream (why mess with perfection?). The Flourless Chocolate Cake and the Banana-chocolate Chunk Bread were garnished with a Grand Marnier Crème Anglais that distracted from the desserts in color and taste. 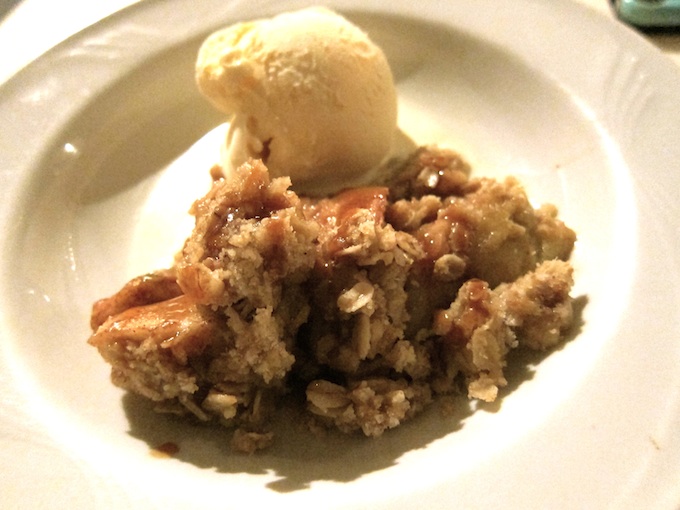 What became a very long evening for which we take much of the blame, hesitation in ordering on our part and lots of chatting and laughing, it was 10 p.m. before our desserts arrived. During the night, we were well attended by bus boys (and girls), our waitress was cheerful and knowledgeable (she recommended the Rodney Strong chardonnay that we ordered for the table), but she was obviously overextended. It’s Restaurant Week, after all.

The 411 on Division Street Grill.