Hi, Donna Monaco Olsen and Bradley Olsen here to tell you about a delicious lunch at 121 Restaurant in North Salem.  With the menu changing periodically for HVRW you can visit 121 Restaurant several times during the two week long program and get a chance to experience something new each time.

We had a chance to view the previous day’s menu and it looked just as good as our own.  All the choices were interesting and different, with three offerings per course.  We also ordered fish tacos from the main menu, and will tell you about them as well because they were super.  The wait staff was attentive and friendly and made our experience even more lovely. 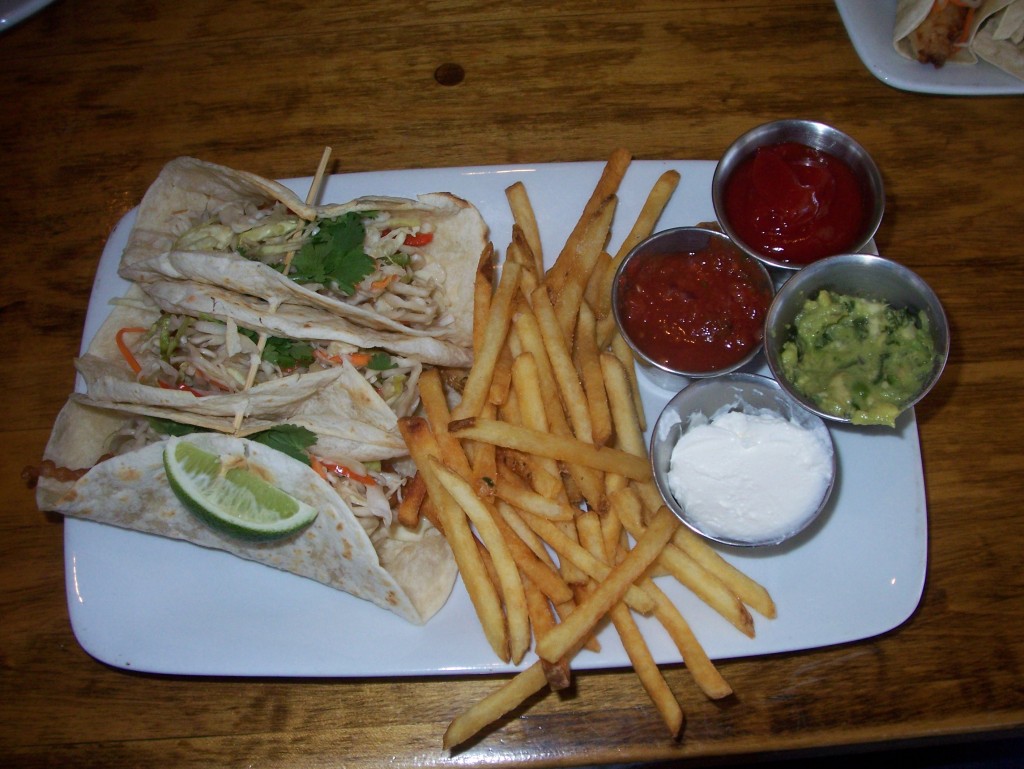 On our chosen day the weather was glorious for our drive on the winding road of Route 121 through North Salem.  Driving past the horse farms that span the surrounding area made it seem further than it really is, but well worth it.  The atmosphere is pleasant and the restaurant has many rooms as well as a separate structure across the driveway housing a deli and pizzeria.  There is also a large bar area and a separate room on the first floor for events.

We were treated to delicious Porcini Arancini, described as Panko, White Truffle Oil, with Creamy Parmesan. 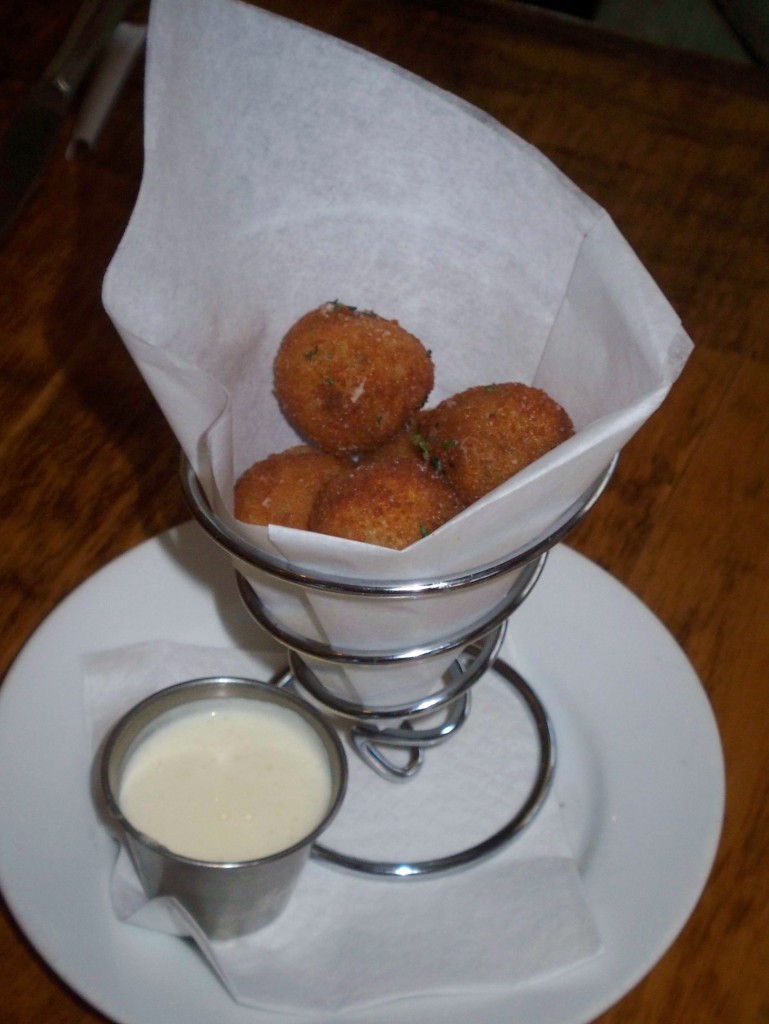 If you do not recognize the word Arancini from your favorite local “old school” Italian spot, it is a rice ball coated with breadcrumbs and fried to a crisp.  It is said to have originated in Sicily in the 10th century.  Most are creamy rice with a pocket of mozzarella, meat or peas.  The name derives from the food’s shape and color, which is reminiscent of an orange (the Italian word for orange is arancia, and arancini means “little oranges”).  These mini spheres were nicely presented in a paper lined stand with a creamy dip was on the side.  Although these were lightly fried non-greasy bites of goodness with a fresh mozzarella center, the dip was a bit overpowering from the truffle oil and too thin, which prompted eating them as is.  They served a generous portion of five which is perfect for letting diners who have chosen another appetizer a chance to have a bite of their own. 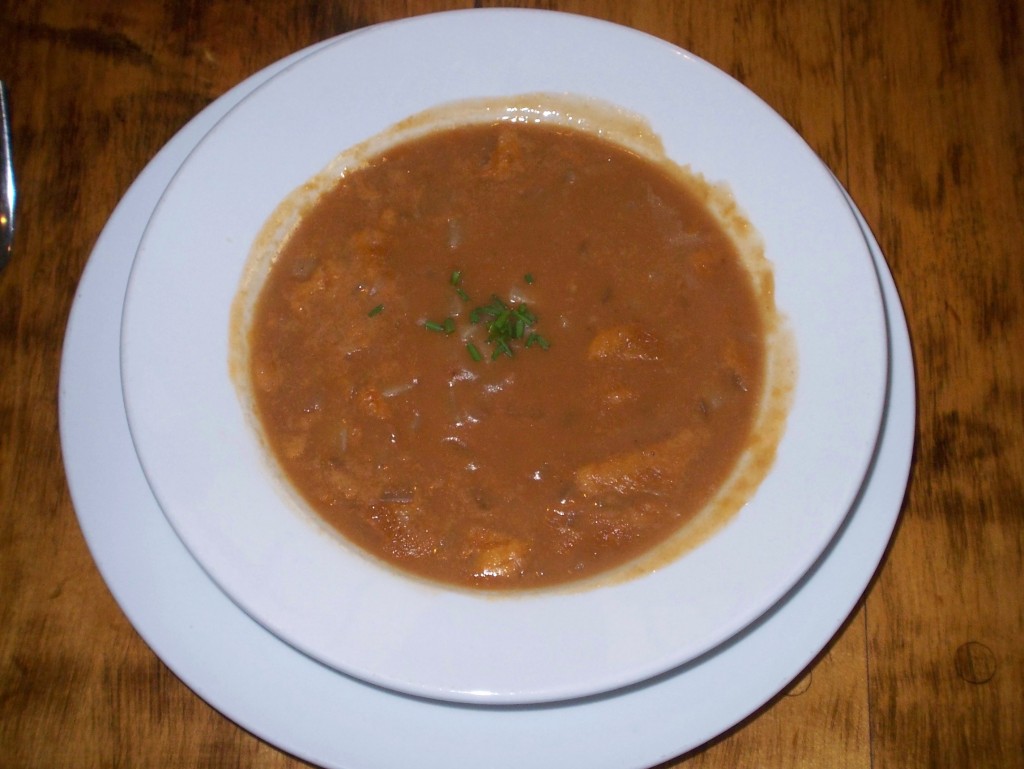 It had more body than a regular onion soup with cubed potatoes and did not contain cream.  Although tasty it could have used something crunchy.

Baby Organic Greens with Sprout Creek Do Re Mi – a pasteurized fresh chevre served with Dried fruits and a Balsamic vinaigrette was the other option.  It was admirable that they listed the local farm from where the cheese hails…check out www.sproutcreekfarm.net located in Poughkeepsie.

The sweet Moules Frittes, fresh Mussels atop shoestring fries, with a Chardonnay, lemon, and caper sauce was amazing and all three of us kept dipping into the sauce to sop it up. 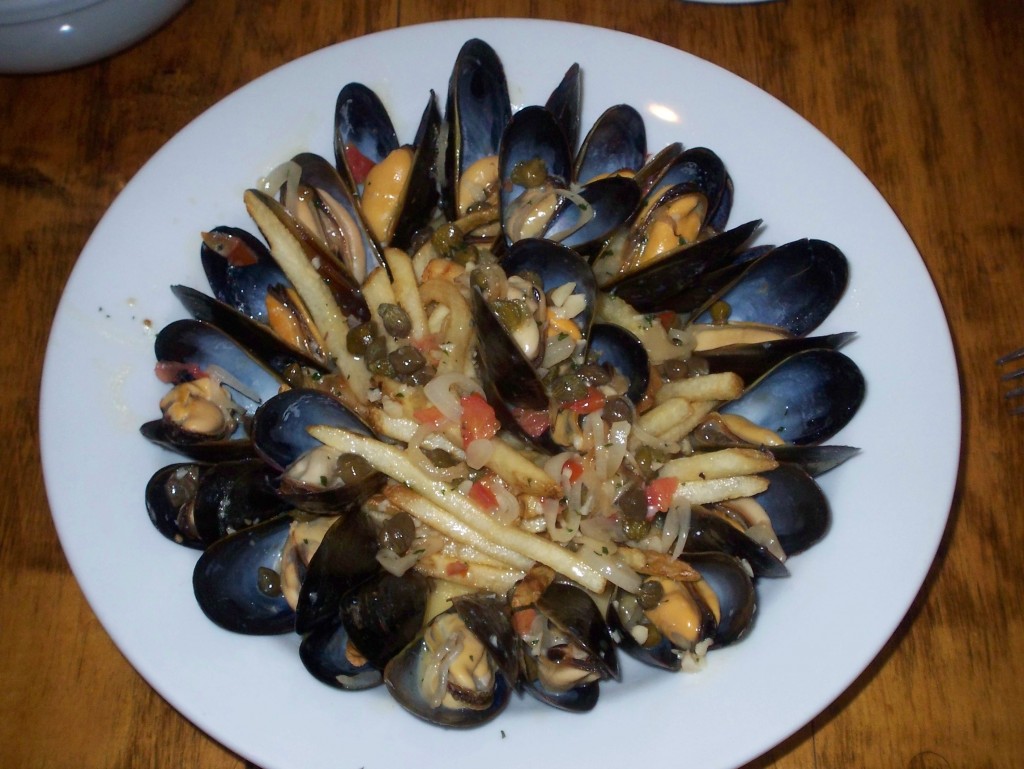 The only draw back was that the frittes were soggy.  We would have liked them atop not under the mussels for crunch, but that did not stop us from eating every one, as they absorbed the sauce and were very flavorful.  It was beautifully presented with each mussel placed in a circular design shown in the photo.

This restaurant is commended for including many local purveyors of fresh products in support of the Hudson Valley, and have brought in wines especially for the HVRW program from local wineries including Millbrook Vineyards & Winery Chardonnay used in the mussel preparation.  Two other HVRW choices were 121 Rigatoni, Crumbled Sweet & Hot Sausage from Le Petit Veau in New  Hartford in a creamy pomodoro and an Asian Vegetable Stir Fry.

On to the fish tacos…they were like no others we have ever tried.  These are the type of tacos you hear about from those who have experienced them in California.  They were delicious.  Three crisp Tilapia with a cabbage slaw in a semi soft taco shell including the accompaniments usually found with tacos.  The guacamole was a tad too spicy from the jalapenos for one diner but all was very tasty when put together.  A wonderfully refreshing and satisfying dish that left us wanting to return on a nice summer day to experience them again.

For dessert we sampled all three offerings.  Local Honey Walnut & Rum Tart with whipped cream was surprisingly not what expected. 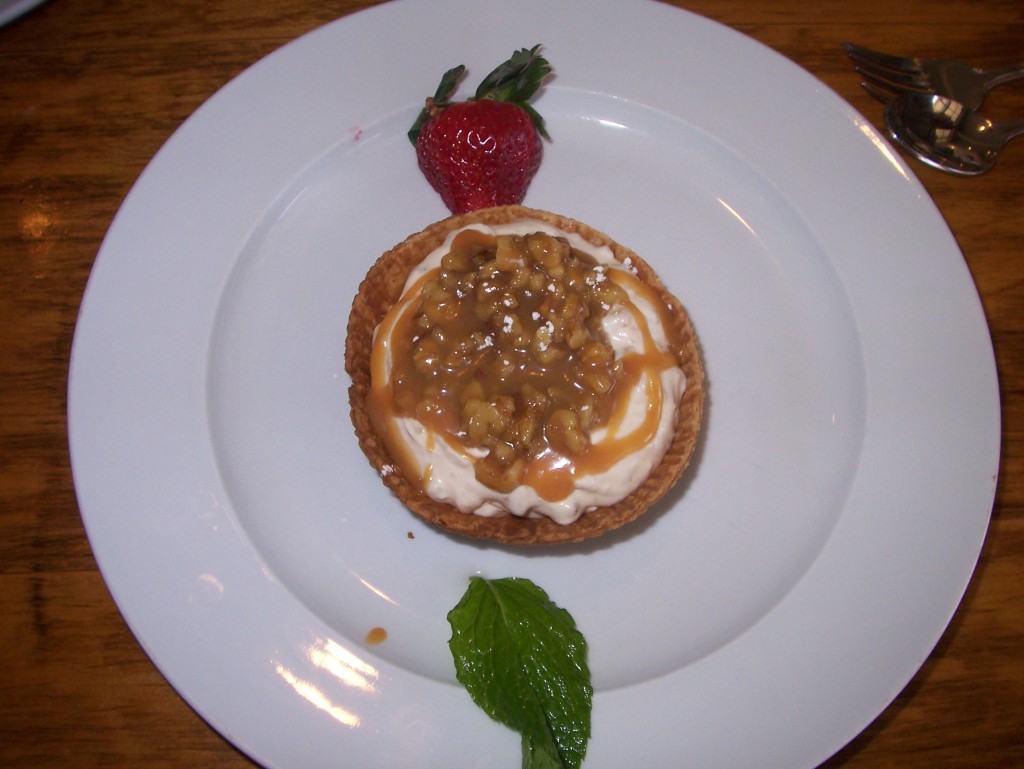 The walnuts were mixed in with the cream in a tart shell instead of a nut tart with whipped cream on top.  One bite was good but too rich to continue.

Mr. Shane’s Chocolate Malt Ice Cream from Ridgefield, CT right over the NY border was the accompaniment to The Captain’s Pound Cake which was delicious tasting but a little dry. 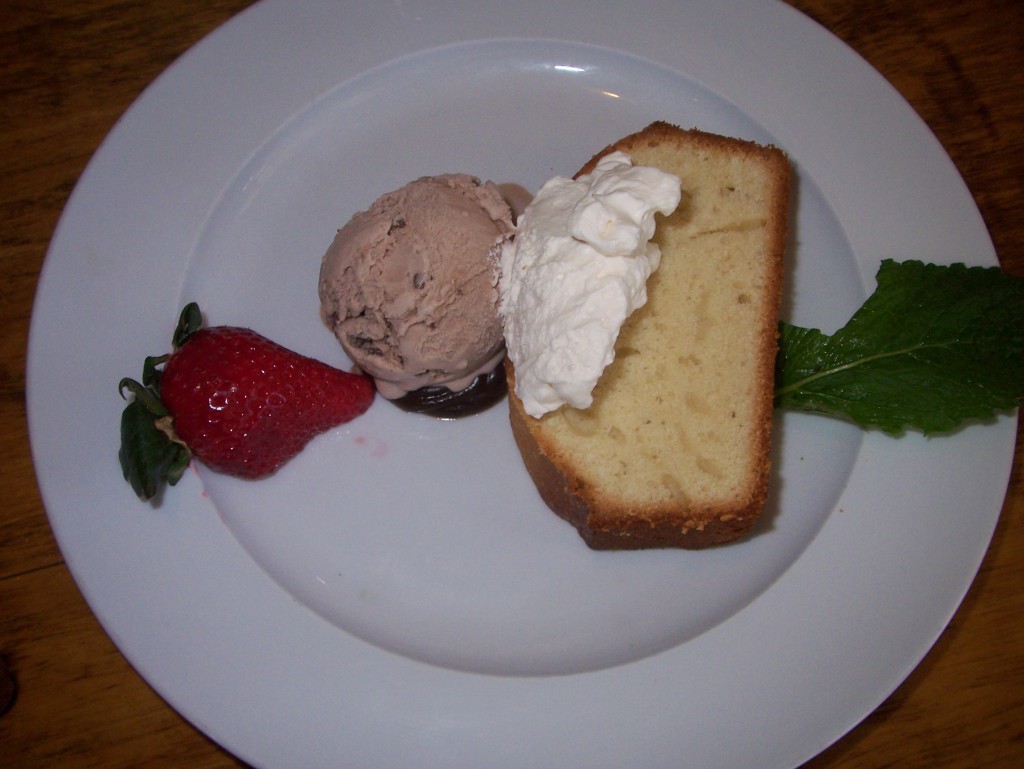 The White Chocolate Bread Pudding with Caramel Sauce was the favorite of the three desserts. 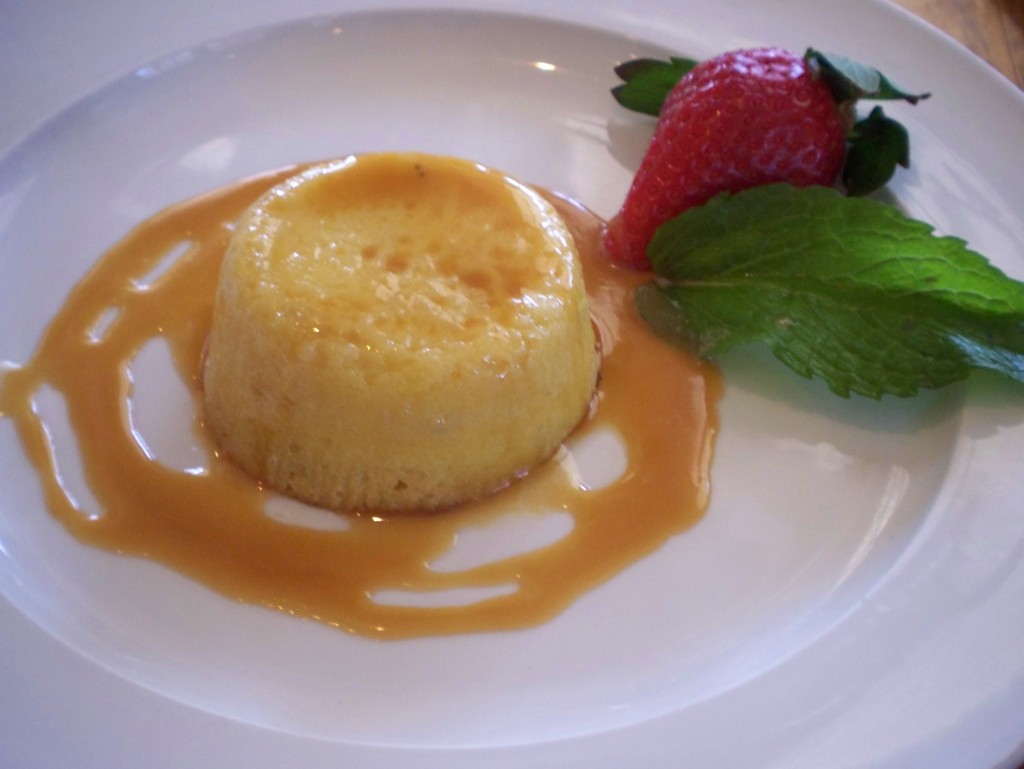 121 Restaurant is to be commended for preparing an individual portion and not cutting it out of a mass preparation as is more typical during this week.

We had visited this spot years ago when they did a cooking demonstration for Westchester Community College’s Continuing Education program (www.sunywcc.edu) and had forgotten how enjoyable the experience was in all aspects.  We are now happy to be reminded and will come back again to try the other offerings, especially the Tuna Purse with avocado that was present on many  surrounding tables.  Hopefully you will make it for HVRW. It is a lovely drive in the country to a great restaurant!