People are reading
You are at:Home»Restaurants»Milonga in White Plains: Hudson Valley Restaurant Week 2011

Hi. I’m Vicki Bloom. I’m a big tapas fan, both because I like Spanish flavors, and because eating lots of small things on little plates really appeals to my diversity aesthetic. I was curious as to what a tapas bar would do with the standard Restaurant Week three-course format. So I collected my friend Mike, whom I owed dinner, and we drove down to Milonga, right around the corner from the North White Plains train station, to see what they could do.

On arriving, we discovered that the tapas were mainly served in the small wine bar section of the restaurant, so we quickly adjusted expectations to the more standard Spanish/Italian dinner menu. The space was warm, with a lot of dark wood and tables with cushy couches in the corners as well as more standard settings in the center, and chandeliers made of squared-off lucite and blue LEDs that somehow worked with the space despite being more modern-feeling than the rest of the decor. 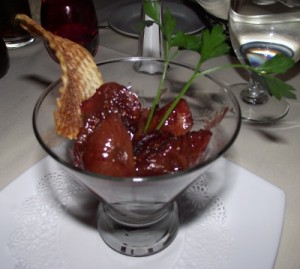 I started with the chorizo and figs appetizer, which turned out to be the highlight of the meal for me. The two components, sauteed together in port wine sauce, came together beautifully, chewy, salty and sweet, and aromatic, dark and rich. It felt almost sultry, and I felt indulged. 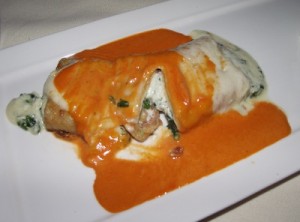 My dining companion tried the Melanzane Rollatini, which was a very lightly breaded slice of eggplant wrapped around a mild mix of ricotta and spinach, topped with mozzarella and a modest amount of vodka sauce. Overall, it was balanced, and not oily as this kind of prep is occasionally prone to, but it was a bit too mild, as were the rosette of mashed potato served alongside it. It also came garnished with a plaintain chip, which since everything else about it was straight Italian, was rather amusing. 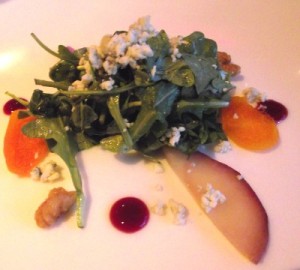 The menu offered two salads, garden and arugula. Both came lightly dressed and beautifully composed. The arugula leaves were tiny and managed to have the character of fresh arugula without becoming overly bitter, and the drips of fruit puree decorating the lovely presentation were not oversweetened. With the dried apricots and poached pears in this salad, my meal was definitely leaning toward the sweet at this point, but that’s not something I mind at all. 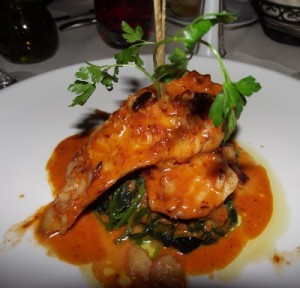 For the main course, I chose tilapia in a spicy cognac sauce. The filets were thicker than I usually think of for tilapia, which made this nicely solid. Crunchy almonds didn’t actually “encrust” the fish as described on the menu, but they were there and made a really nice texture contrast with the leafy bed of sauteed spinach, the soft chunks of garlic, and the flaky fish. The sauce was tomatoey and not particularly spicy or cognac-tasting, but it complemented the fish well. 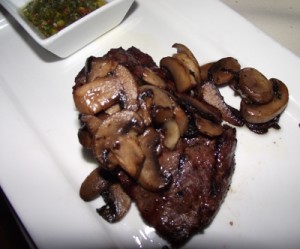 Mike chose the Mendozino steak, since he’s a big red meat fan, and has gotten in the habit of comparing steaks lately. It was a solid piece of flat-iron steak, came topped with a meaty glaze and mushrooms, and was nicely grilled, tender, and juicy. Mike heartily approved, saying it was near the top of his recent steak tour. We were a bit confused by the side of chimichurra sauci, which our server told us had peppers, jalapenos, cilantro, and oil. The green mix was a little bland and just did not match the rest of the prep. 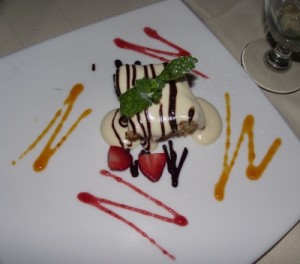 There were two dessert choices — tiny squares of tiramisu and tres leches cake. Both were pleasant and gorgeously presented but bland executions of the classic dishes. I would have liked to see the tres leches more carmelized, and the tiramisu with more coffee and alcohol character, whereas both were more like light sponge cakes. Nevertheless, they made a sweet end to what was an overall delicious and pleasant meal.

One of these days I’m going to hop off the train in NWP and head over there for a glass of wine and some tapas in the bar section. I hope they still will be serving chorizo with figs.