Hi folks, Liz here, reporting from Tuesday’s lunch at Frankie & Johnnie’s. While I’ve been to the restaurant several times for drinks and snacks at the bar, I’ve never actually been seated at a table for a meal. The restaurant, in an old bank, is a beautiful space with soaring ceilings, an enormous painting above the bar that’s a pop-culture take on Edward Hopper’s “Nighthawks.” 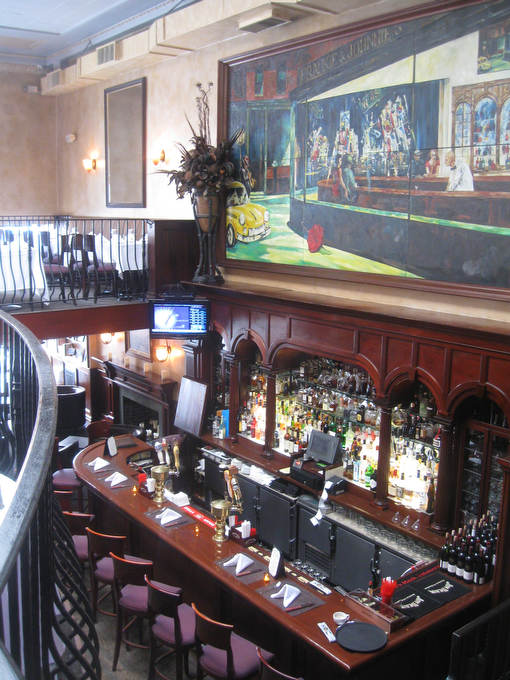 We sat right across from the mural on the second floor. 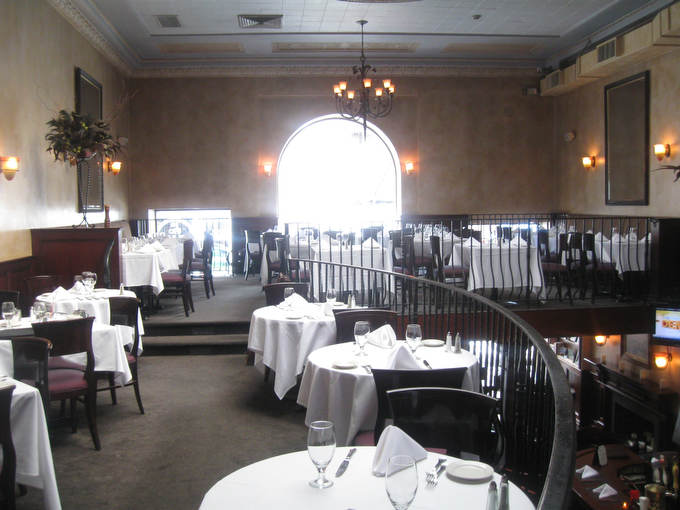 There are three appetizer choices and four entree choices on the HVRW lunch menu. We skipped the soup of the day and went for the Frankie & Johnnie’s Salad (with iceberg, tomatoes, onions, cucumbers, mushrooms and green peppers) and the crab cake.

The salad was fine — the lettuce was fresh and the variety of vegetables kept the texture interesting. I didn’t love how acidic the dressing was. But maybe that’s just me. 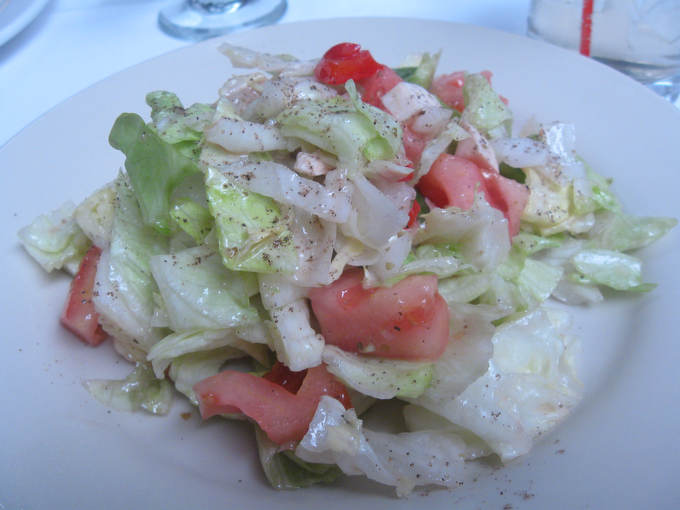 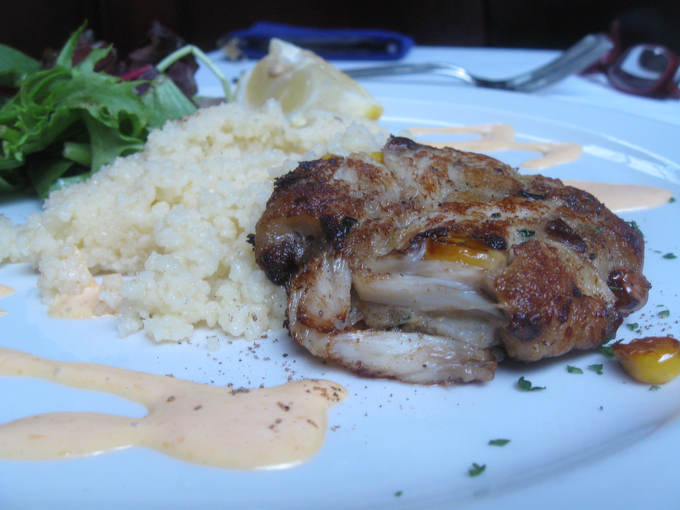 had lots of lump crab in it. The sauce was zingy and the cous cous warm and almost meaty. Nice dish.

For our mains, we skipped the Chicken Caesar Salad and the fresh fish — swordfish — and ordered the Linguini Amatriciana and the petit filet mignon with portobello mushroom.

The pasta was not really what I was expecting. Amatriciana implies guianciale — cured pork jowl, sort of like bacon — and spicy red pepper flakes. 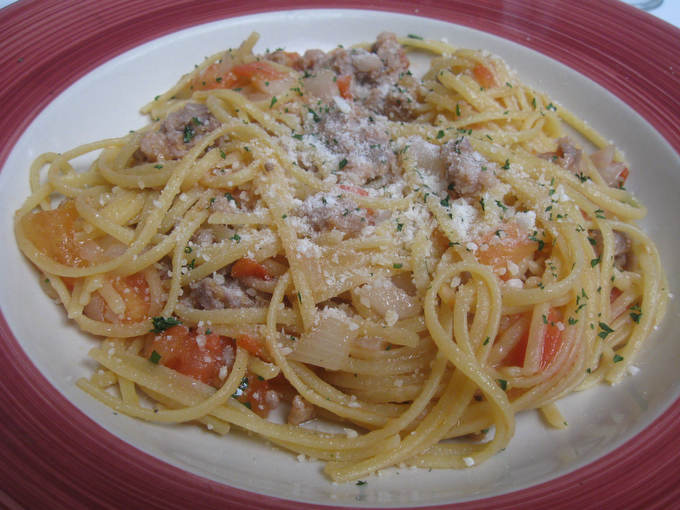 It wasn’t spicy, and I didn’t detect any bacon, much less guanciale. But even though the dish was not what I thought, it was still tasty. The pasta was al dente and the tomatoes surprisingly tasty for this time of year.

But of course, this being Frankie & Johnnie’s Steakhouse, the steak was the star of the show: 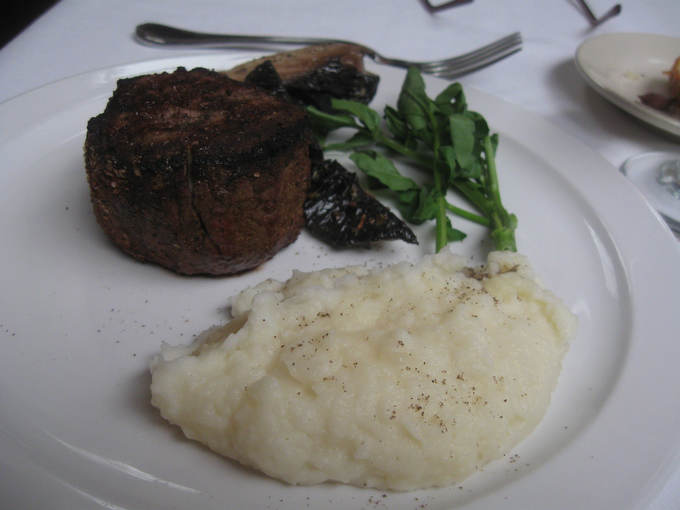 The meat was tender but with lots of beefy flavor — a nice crispy, seared (and salted) crust on the outside and medium rare pink on the inside. The mashed potatoes were silky and buttery and the portobello mushroom was meaty and satisfying, with a nice balsamic glaze drizzled over it. Bravo!

We did not get a choice for dessert, but when they served it, I was pleased to see key lime pie. It was a not-too-heavy ending to the meal: 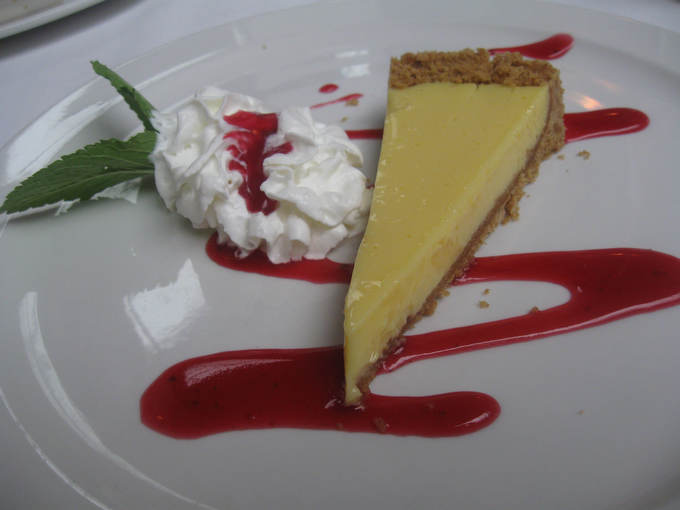 Obviously you don’t go to a steakhouse for pasta. But the crabcake and the steak were really very good, so order that. At the bargain price of $20, you can get one amazing meal.