Hi, Maria Reina back for my second blog appearance. This time coming to you from The Cookery, in Dobbs Ferry. I was very excited to take on this task, as (amazingly!) we have not been to The Cookery. We dined on Sunday night with another group of foodie friends. 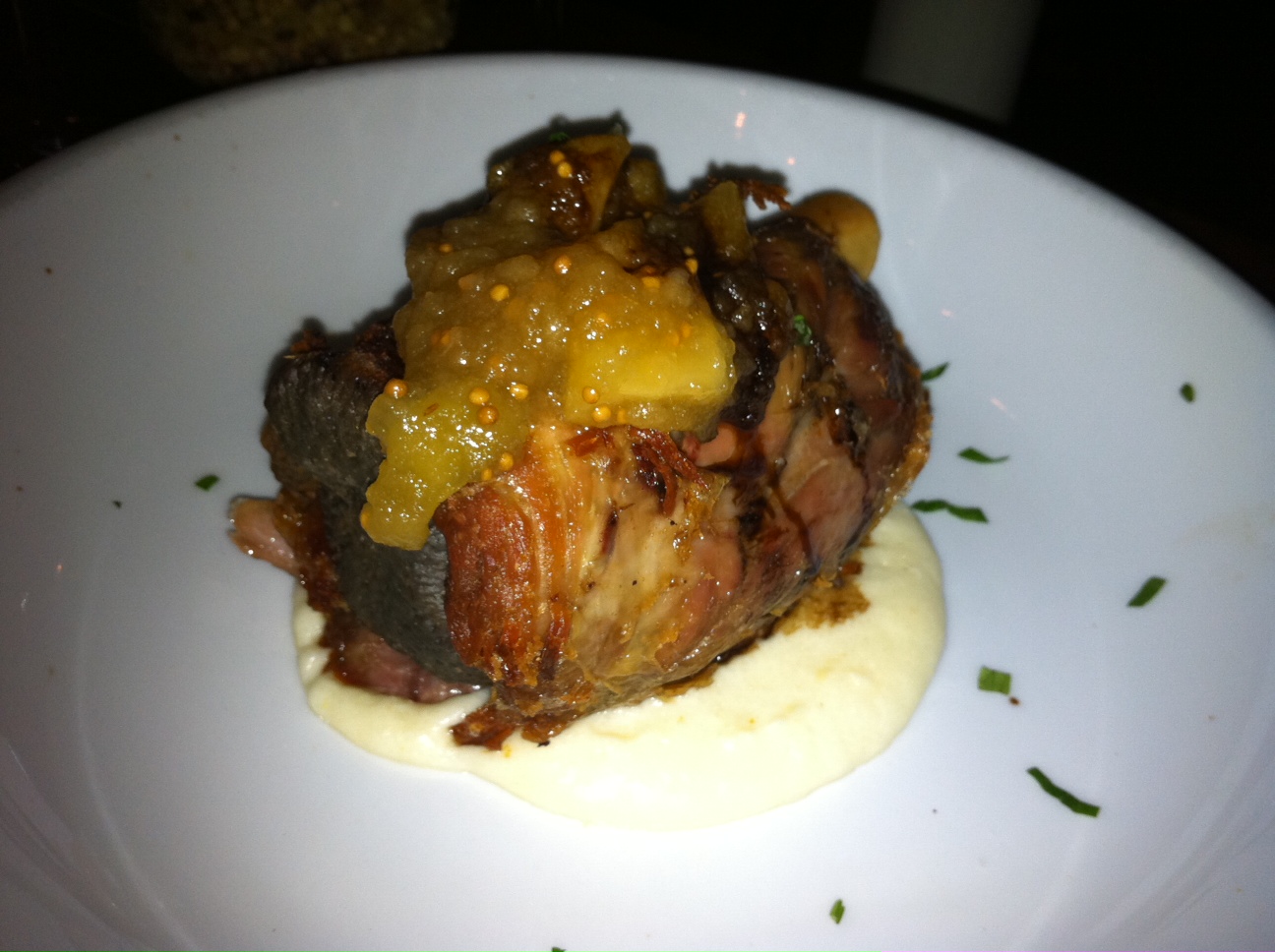 First, let me say that the sections offered were tremendous. At The Cookery, there was only the special menu offered, and with 20 different dishes to choose from. Since we were a large group we were able to hit almost everything, which was fantastic.

On to our first course: My husband Larry loves anything that contains ricotta cheese. 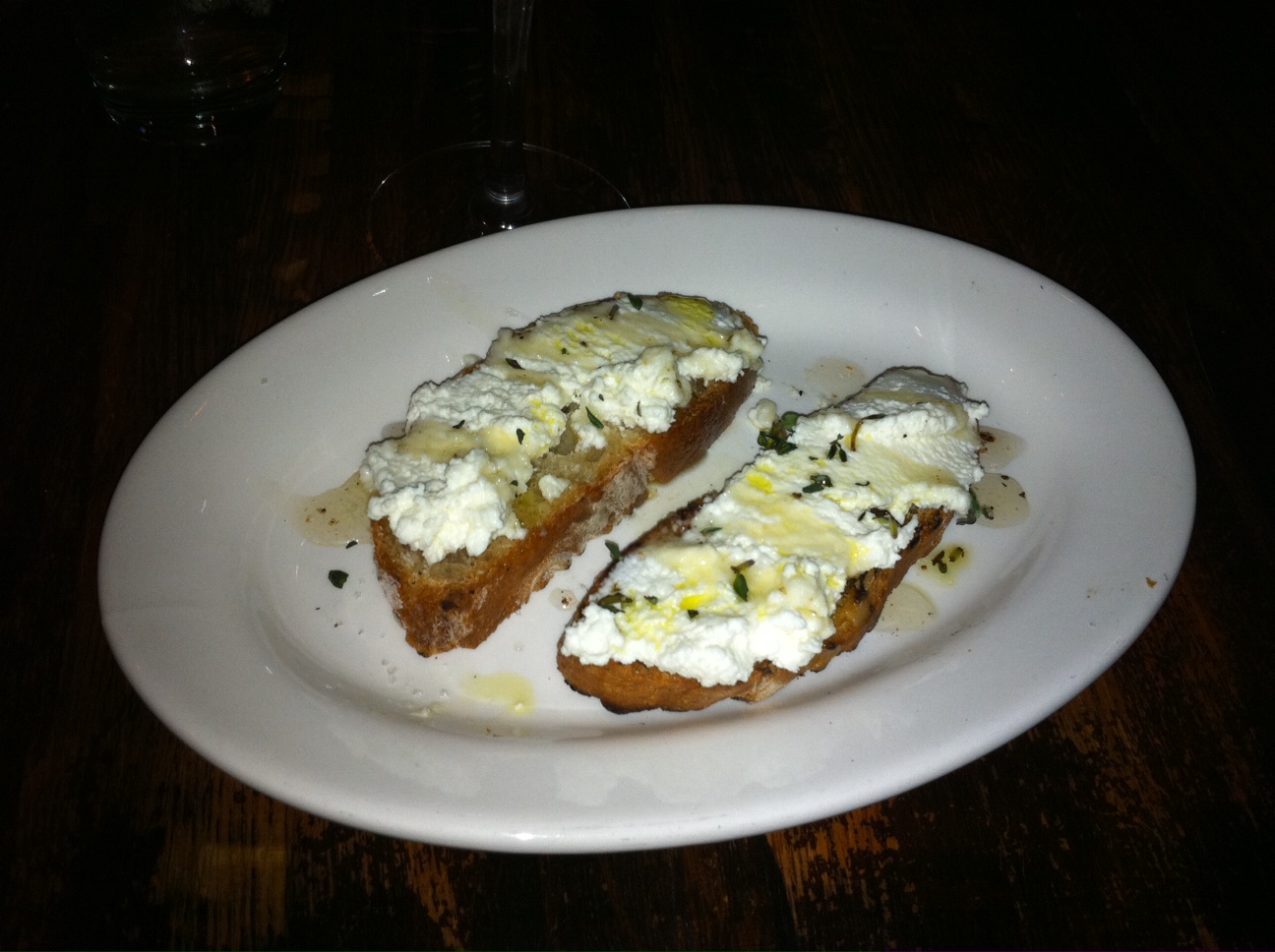 Lucky for him there was a creamy fresh Ricotta Crostini with Truffle Honey and Thyme. I must admit I was scraping the dish with my fork for gather up the remnants of the delectable truffled honey and bits of ricotta.

Charlie opted to be safe (and I teased him about that!) and went for the Arugula Salad. I did have a nibble and did agree that there was something quite different with the goat cheese, almond and kumquat that set the salad apart.

I had the Crisp Octopus with Potatoes and Orange Marmalata. 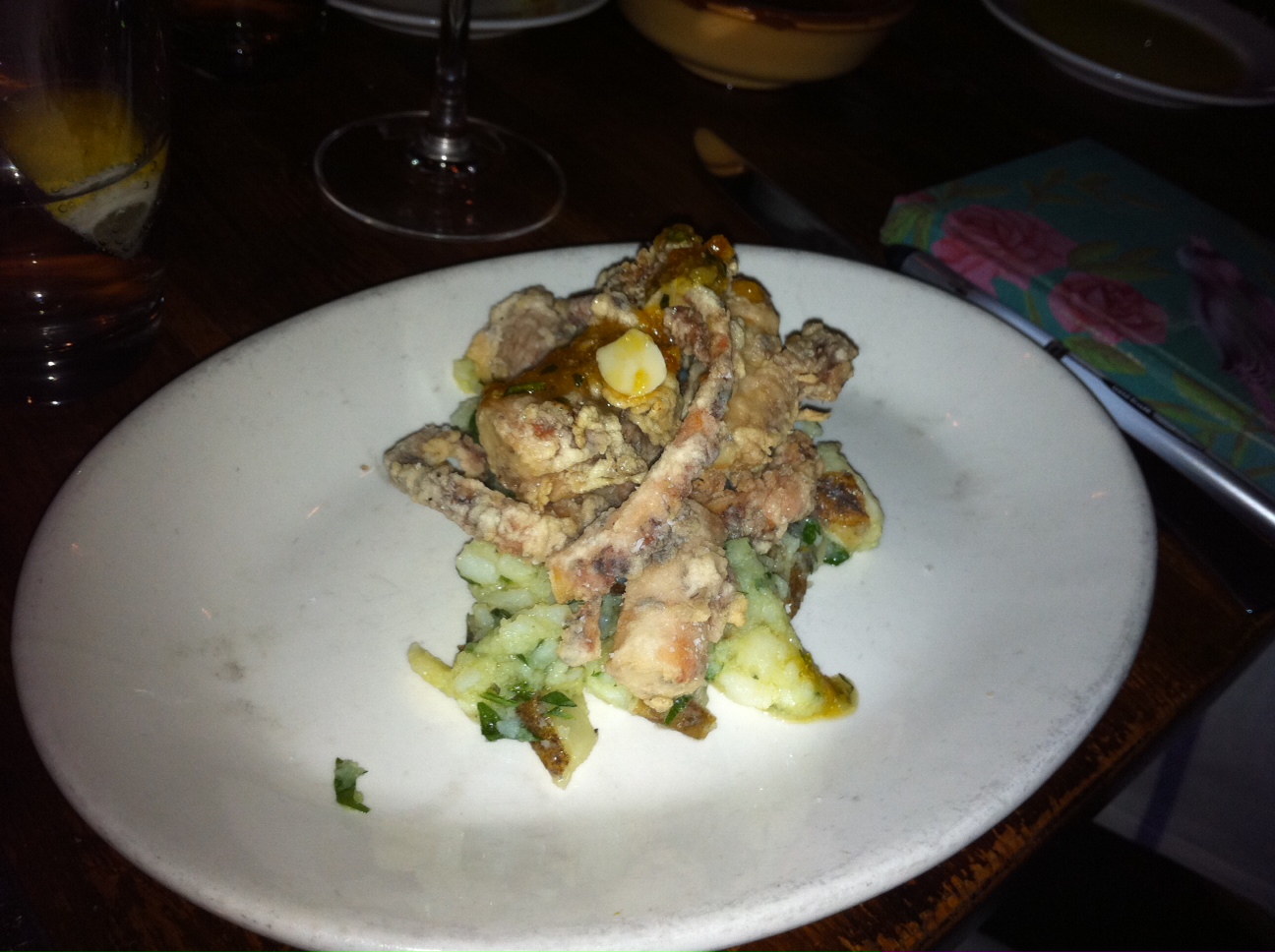 Octopus is always a favorite of mine, but can sometimes come to the table rubbery and chewy – I’m sure that’s happened to you as well. I can report that is version was quite the opposite. Crunchy on the outside and beautifully soft on the inside. The orange marmalade drizzled on the potatoes and fish was a perfect counterbalance.

Jon had the Fresh Mozzarella with Grilled Bread, and while the cheese was to die for, the bread was just slightly over charred, which left the bread with a bit of charcoal taste.

We all felt overall dish that was far and away the best in this course was Jeff’s choice: Heirloom Polpette. 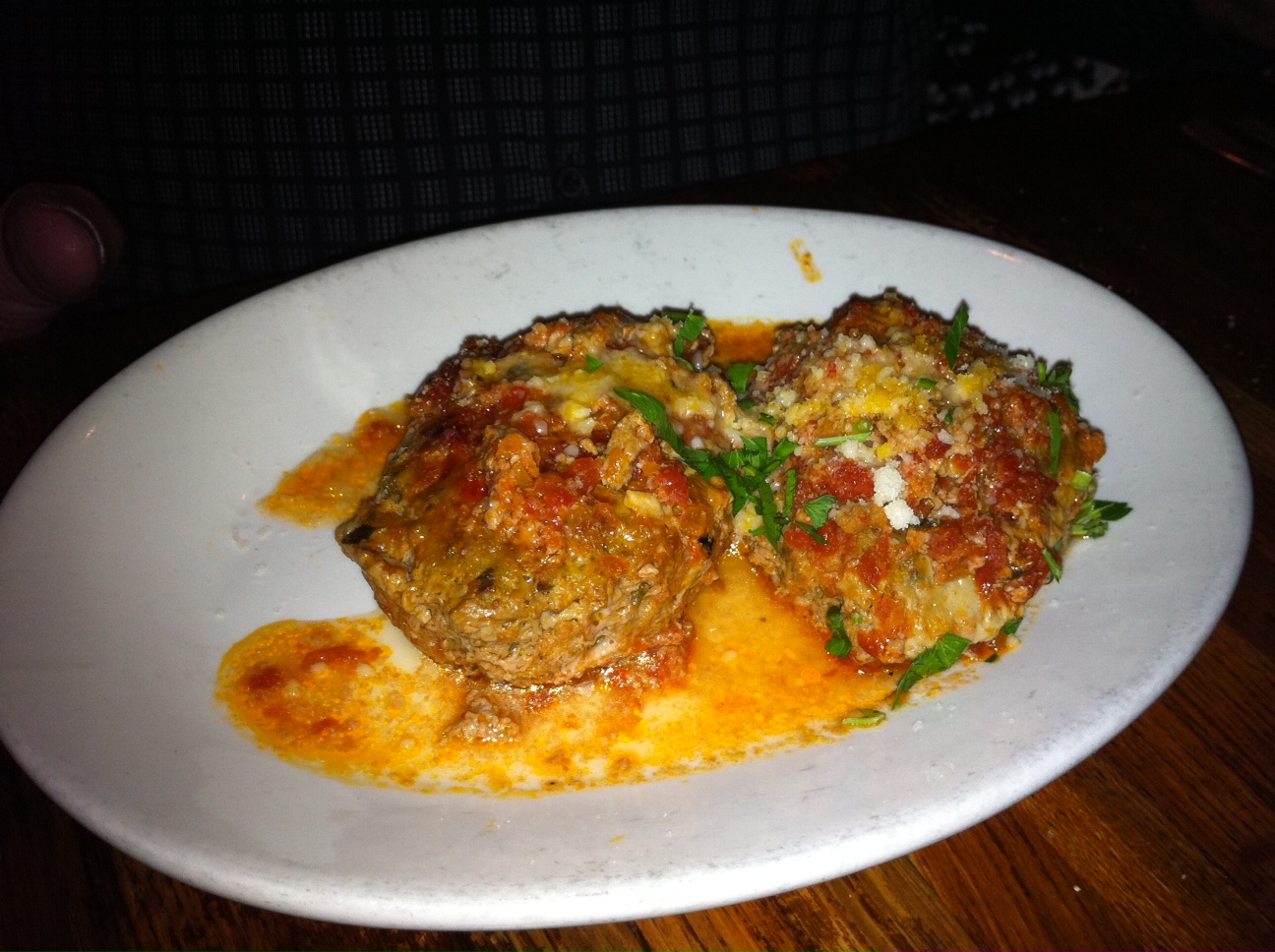 Chef David has created something really special, and from what I understand, is derived from his Nonna’s recipe. His meatballs were the lightest I have ever tasted, yet full of amazing flavor. The tomato sauce was smooth and complimented the polpette in a really lovely way. A trip to this restaurant just to try them is an absolute must!<

On to dinner: the guys all opted for protein, but I went the pasta route. I generally choose a homemade pasta if it’s on a menu when Larry and I go out. Pasta is one of those ingredients that you can feel the “love” coming through, and I felt it with this Cauliflower Ravioli. 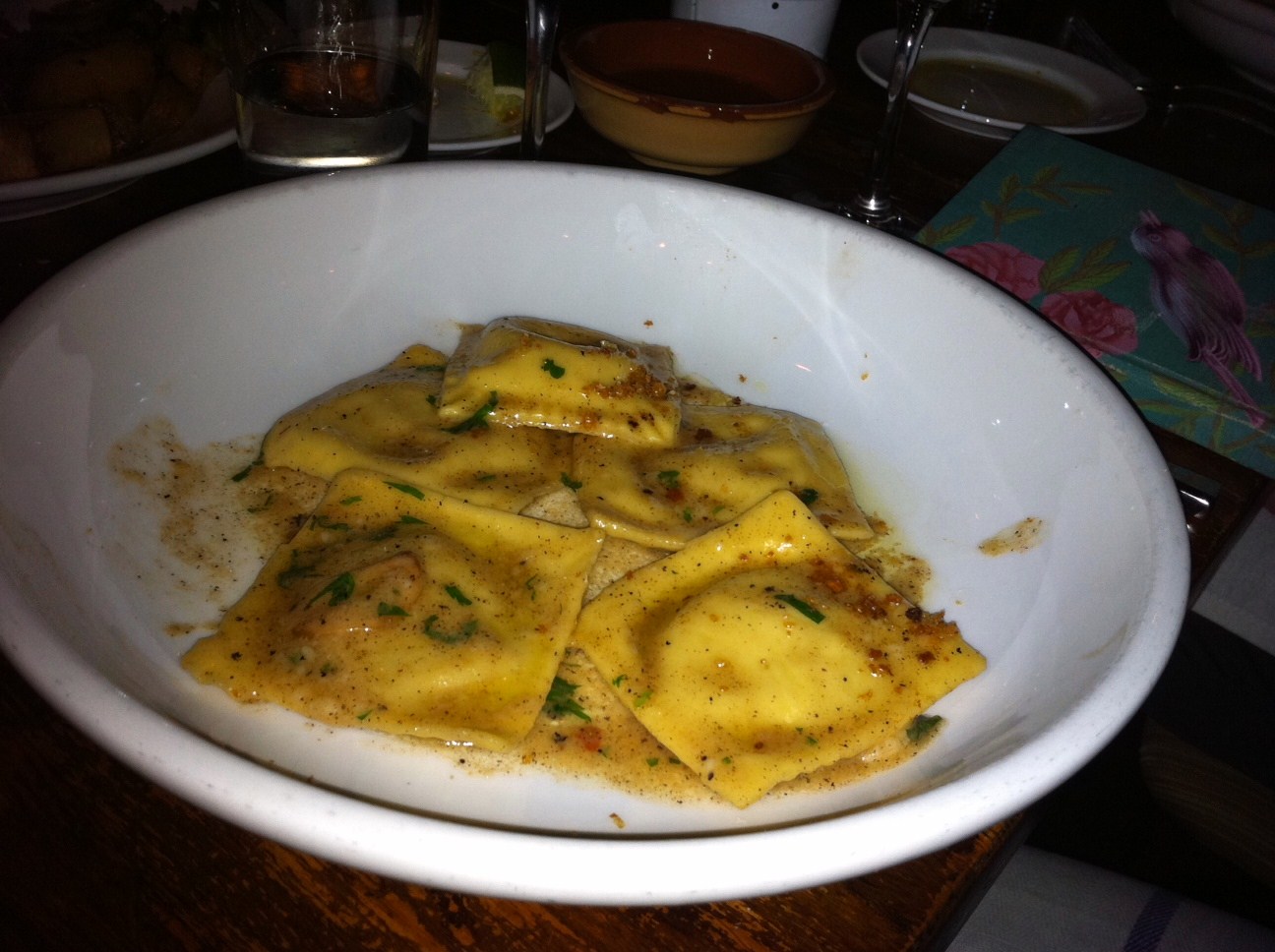 The filling was smooth and creamy and the Brown Butter drizzled over gave it a rich quality. Perfection to this pasta-lover!

Larry had the special fish of the day, which was Branzino, one of his favorites. 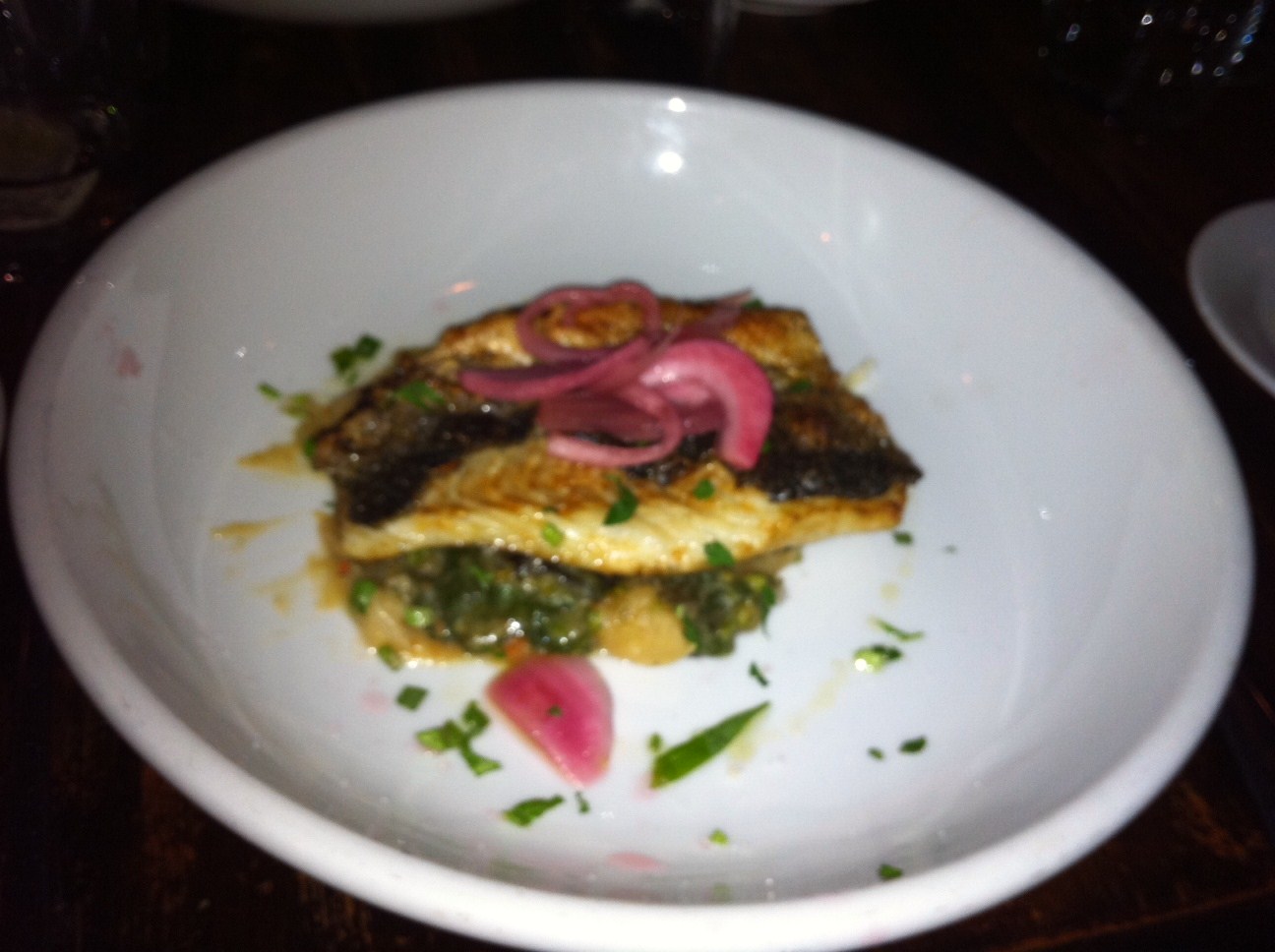 The fish filet was resting on a bed of Broccoli Rabe and Borlotti beans. Borlotti, also known as cranberry beans, have a chestnutty flavor when cooked, bringing a nice balance to the lightness of the fish. Larry made special note of the Pickled Fennel on top which gave the whole dish a little zip.

— and Grilled Filet of Beef: 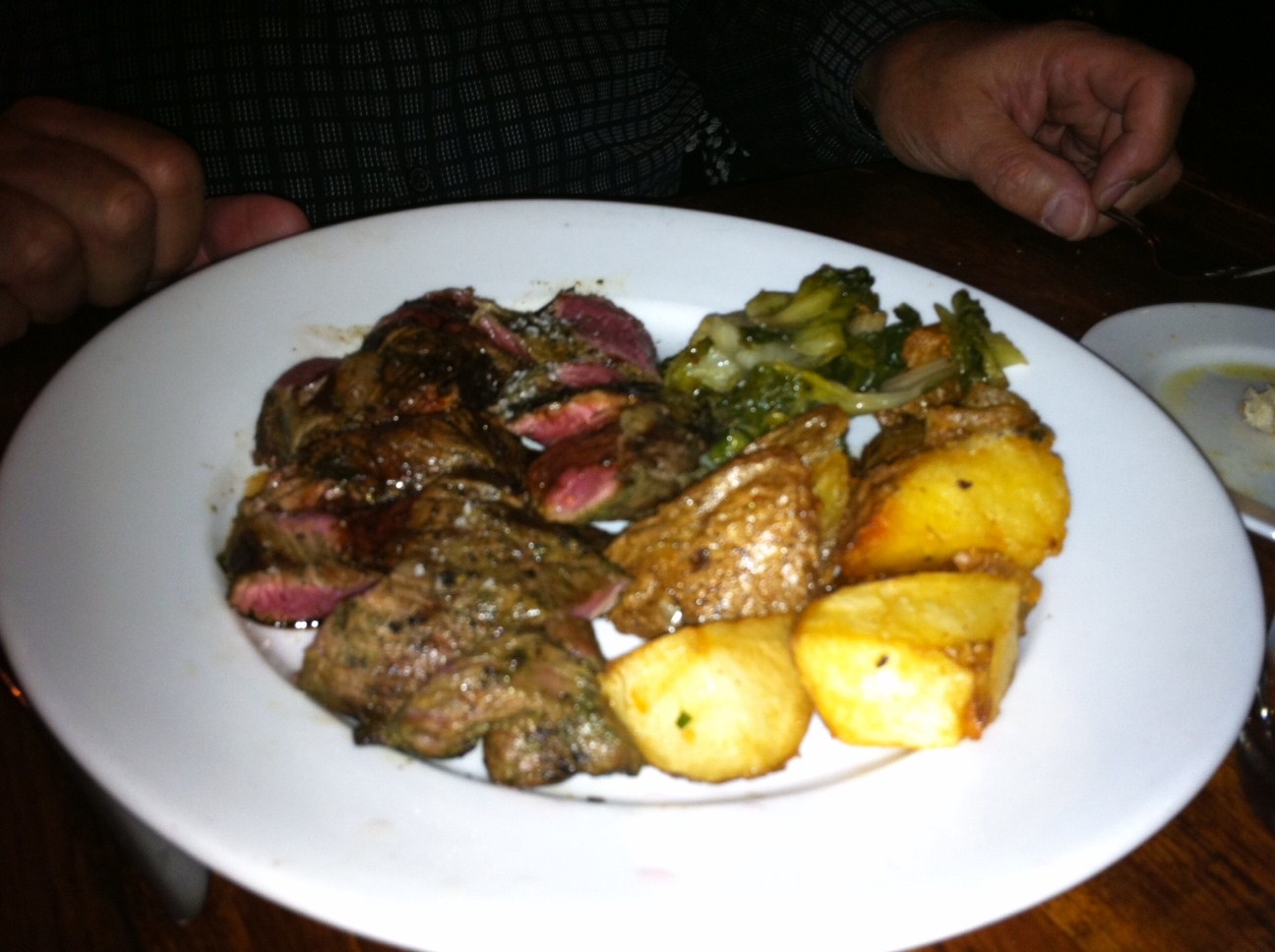 Each perfectly cooked and each having a wonderful accoutrement to note: Apple Mustard with the pork and a fabulous Vin Cotto reduction for the beef.

I would have to say, in my opinion, the highlight for that course was the chicken dish that Charlie chose. Pollo al Mattone, also known as chicken under a brick. 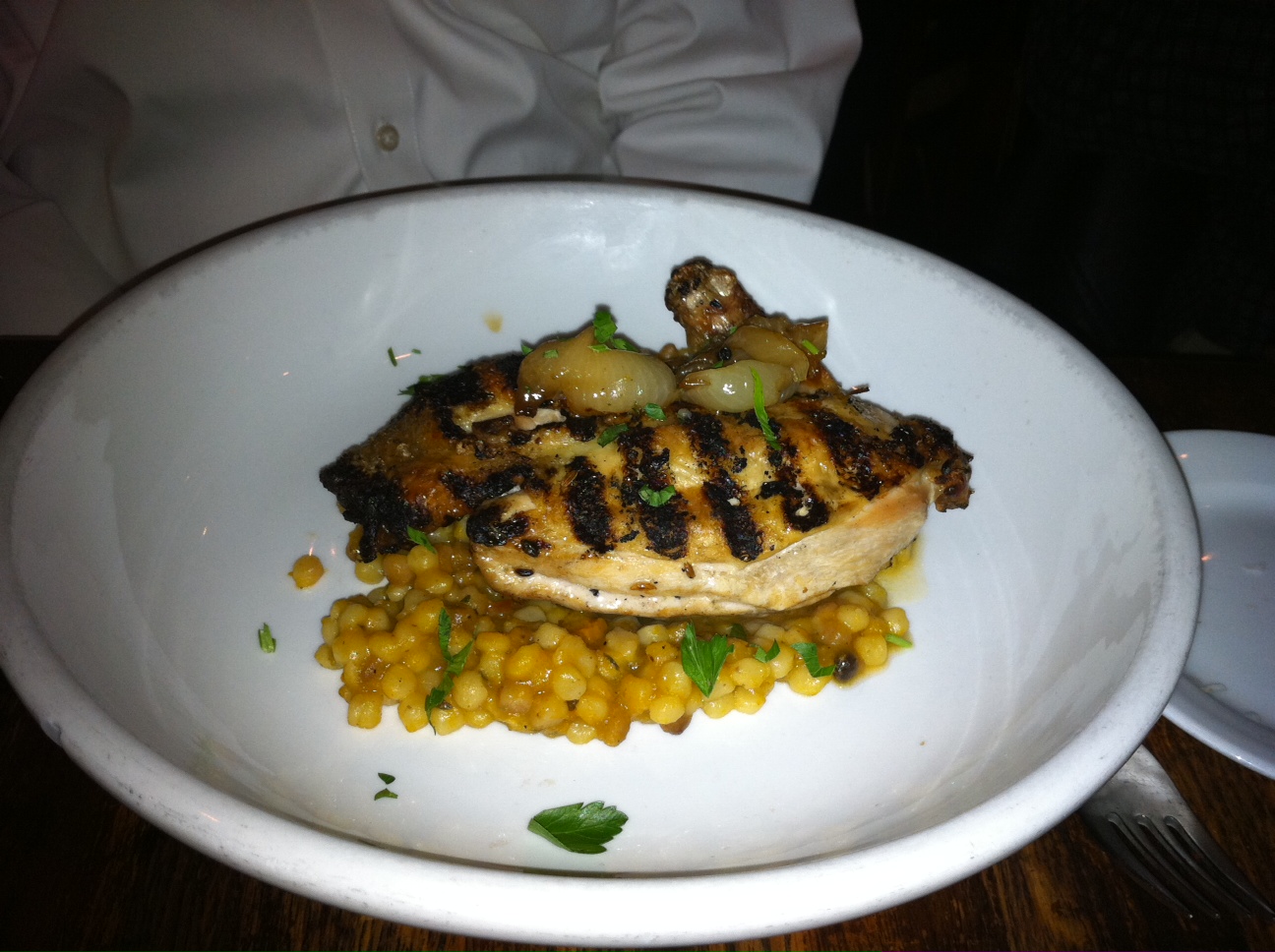 This dish hails from Tuscany and if properly cooked will be the best chicken dish you’ve ever had. The skin should have a nice seasoned crispness and the meat juicy and tender. (Yes, everything I had hoped for!) The chicken was resting under a delicious Pumpkin Fregola. Fregola, a toasted pasta, comes from the island of Sardinia. For me it’s one of those special contorni dishes that can be disappointingly over, or under cooked, like risotto. The pureed pumpkin added a layer of creamy flavor to fregola that even surprised me. As I looked around that table every plate was scraped clean – not a bit left over to take home! I do admit I was hoping for a small package to take home and savor the next day. (sigh) 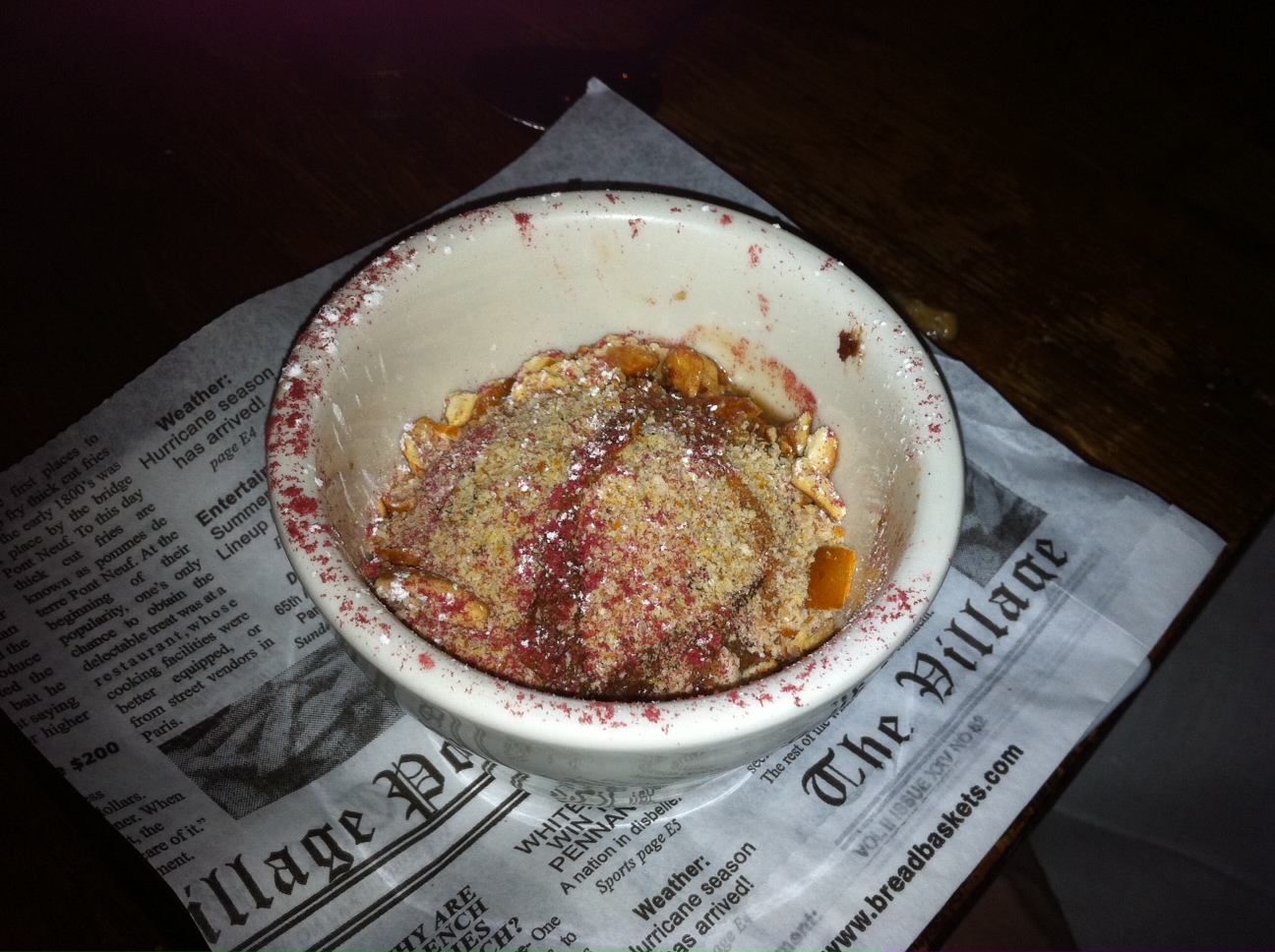 While the polenta had a nice rich creaminess that contrasted with the crushed pretzels and caramel, we all thought the Fleur de Sal was a wee bit heavy handed.

Larry was happy as a clam having another taste of ricotta with Citrus Ricotta Cheesecake served with a yummy pineapple marmellata: 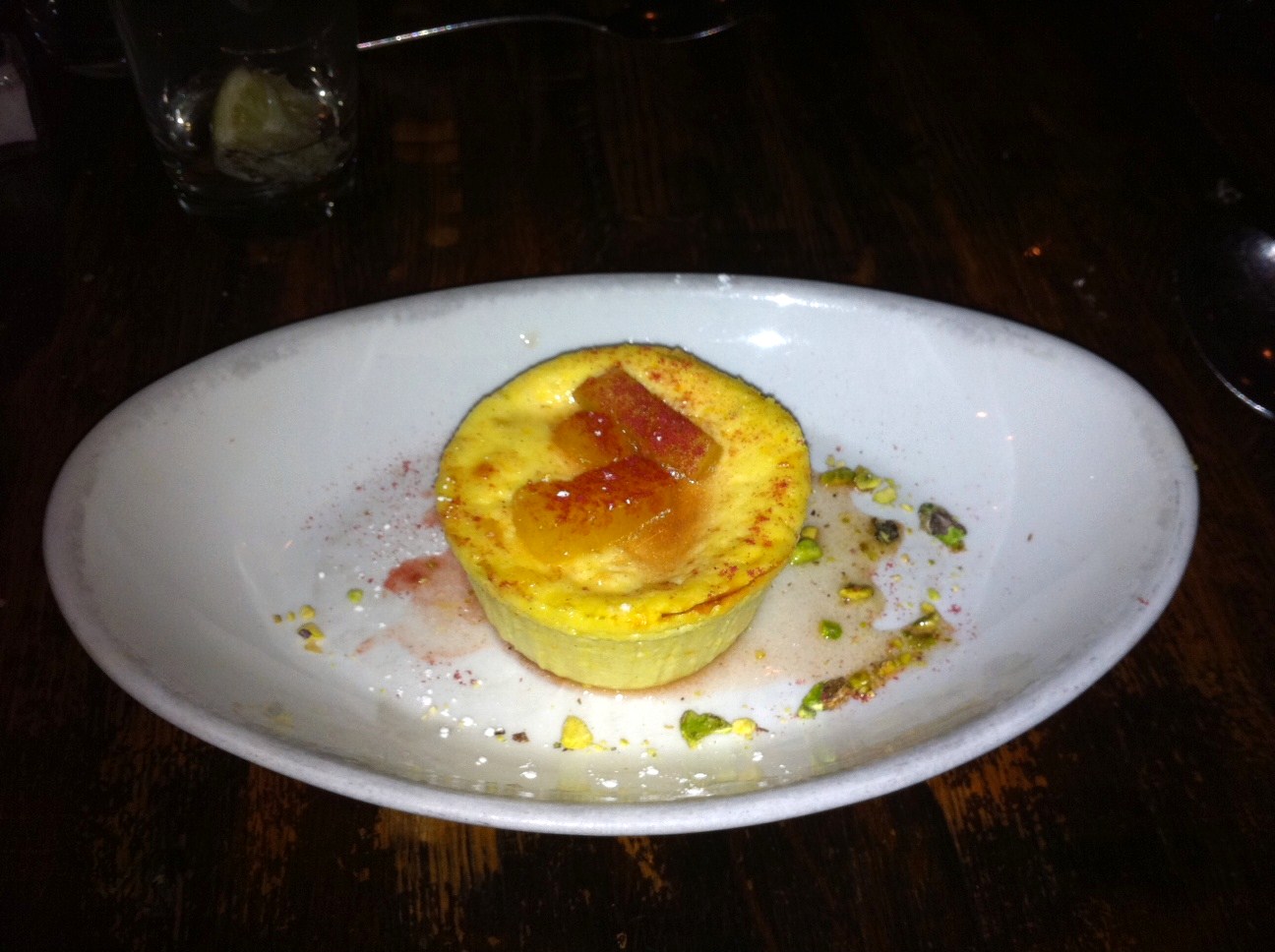 But the real table choice was the Sticky Pumpkin Tortina. 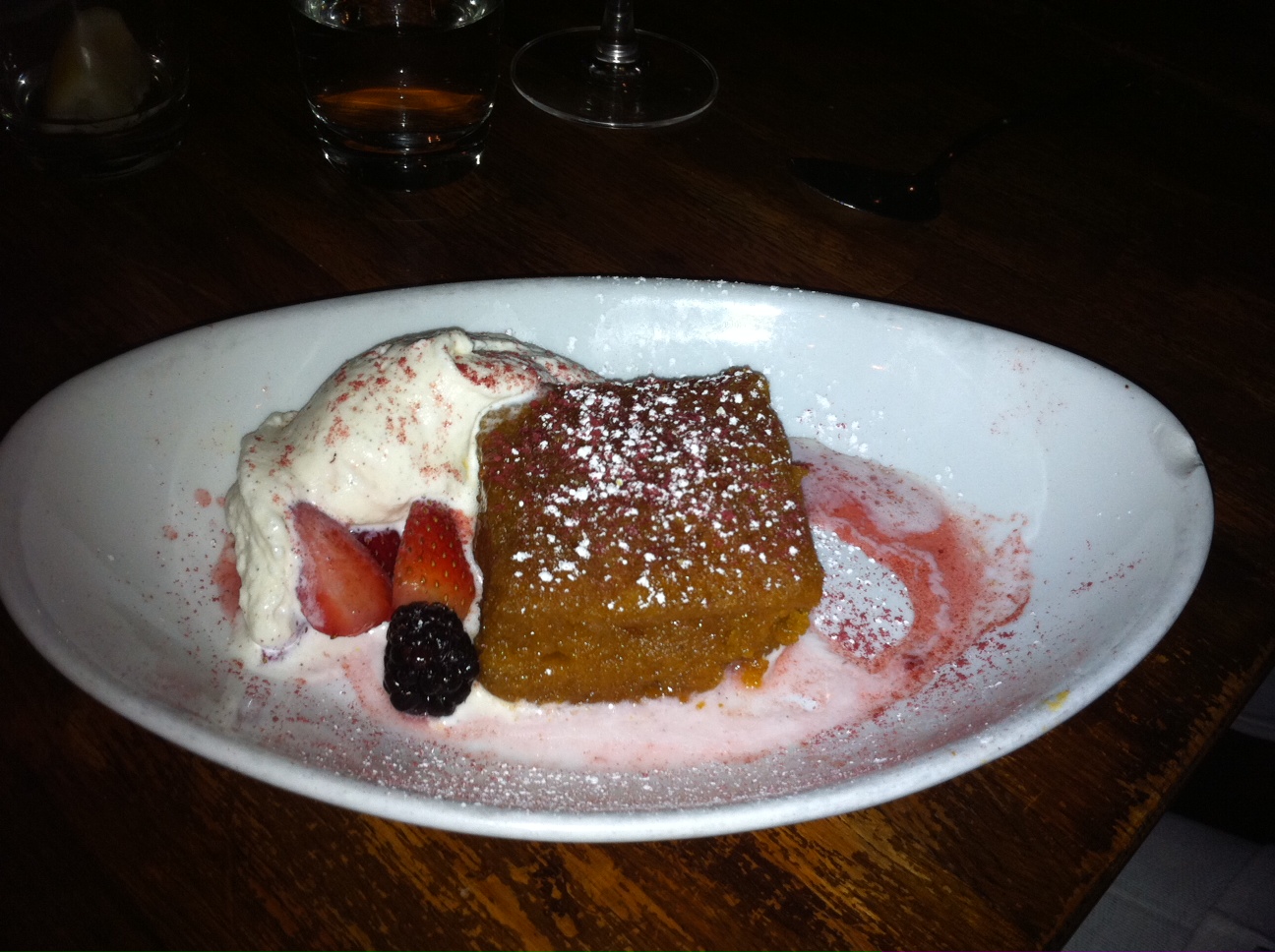 A warm rich pumpkin cake served with vanilla gelato. For me, a perfect end to a wonderful meal with great friends. 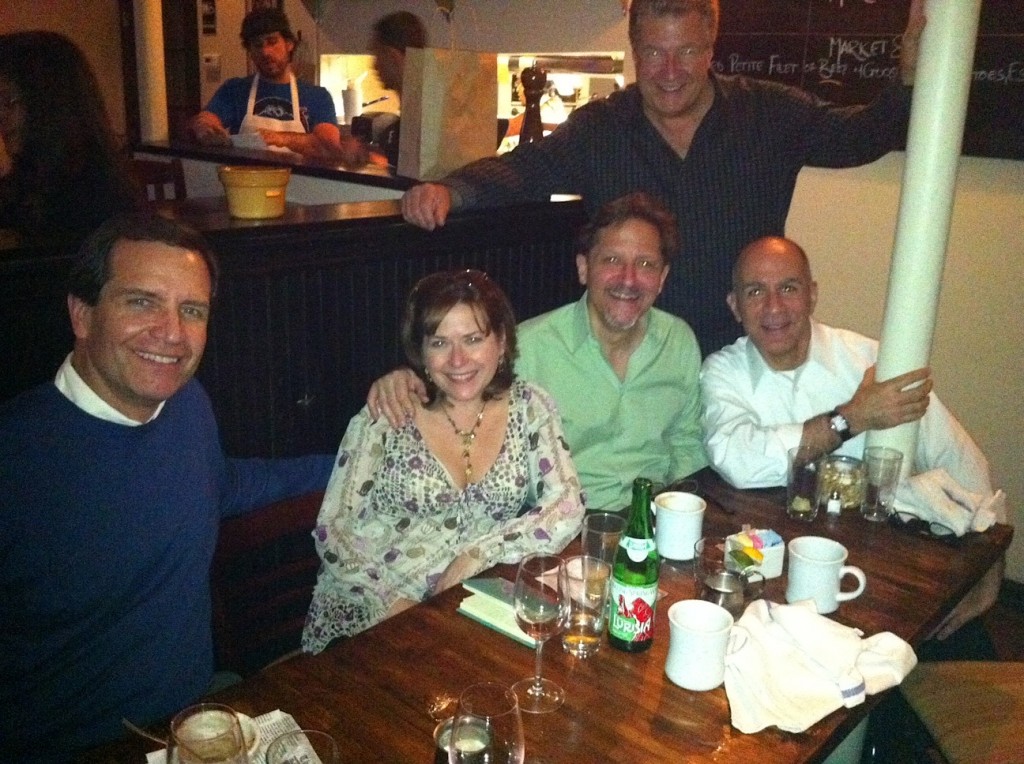 They are truly a neighborhood restaurant that is dedicated to capturing the warmth of Italian food. If you have never been to The Cookery I can’t encourage you enough to make it there. You will not be disappointed. The atmosphere, staff and food are the very best.