Rachel Seebacher again. Nestled on a 300-acre property over looking the Hudson is The Garrison. From March to December, this sprawling, yellow Federalist-style country club is home to the Valley Restaurant. For some it may be a trek, but this destination dining experience should not be missed. The Valley Restaurant is small, accommodating less than 50 people, and done up in modern farmhouse – sleek lines, painted-white, wood-planked ceiling, pastel blue and green plaid wallpaper, and an antique wooden buffet table decorated with jeroboams of champagne.

The menu is nouveu American. And as beautiful and posh as this restaurant seemed, they did not push their regular menu, advocating instead for the elegantly crafted restaurant week offering. This menu lacked nothing, offering poultry, beef, fish and vegetarian fare, as well as a veritable cavalcade of desserts crafted by their in-house pastry chef. The three-course meal was perfectly portioned, leaving each in my party of five sated, but not uncomfortably stuffed, and allowing for guilt-free consumption of the sumptuous breadbasket. 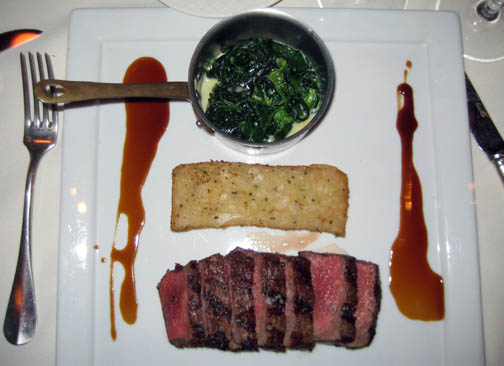 The first mouthful of food that swept out of the kitchen in the arms of the black and white uniformed waitstaff was a calamari escabeche amuse-bouche. Not mentioned on the menu, this mouthful of perfectly poached calamari, whose texture was augmented by a “salad” of breadcrumbs and brunoised bell peppers and pickled onions, came as a welcomed surprise, setting the tone for the generosity and classiness of the meal to come.

Next came the appetizer course, which boasted four offerings, of which we tasted one of each. 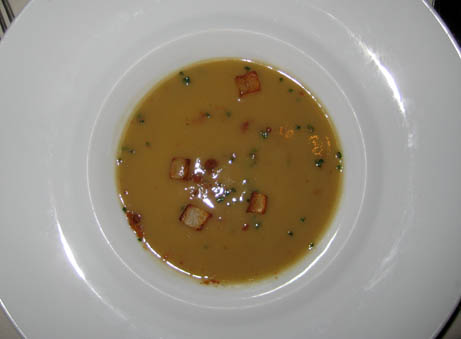 My mother was most delighted that the offering was but several large mouthfuls – enough to whet the appetite without weighing down the stomach.

My brother ordered a tuna crudo, perfectly cut sashimi grade slices on a bed of crispy seabeans and adorned with honey, chives, and pink grapefruit supremes.

The grapefruit and honey added a sweet tartness to the mild flavor of the tuna, while the seabeans brought a needed sea-saltiness and textural crispness that the extremely mild tuna lacked. 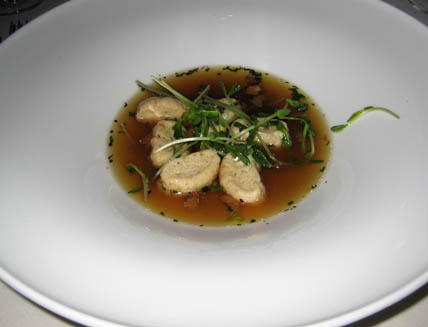 The young herbs added a sprightly brightness, the cracklings, exciting crispy crunch to the richness of the peppery broth and mild simplicity of the airy gnudi. 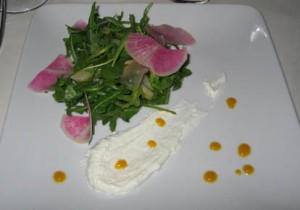 I – in the spirit of trying it all – ordered the salad. But let’s not underrate this dark horse, which emerged as a table favorite by night’s end. The Garrison Farms Sylvetta was an offering of micro-arugula, smoked goat cheese, paper-thin rounds of raw turnip, and cubes of maple-cooked squash. The goat cheese was an addicting mouthful of creamy, smooth, smokiness, whose flavor changed when juxtaposed with each component of the salad – the peppery arugula, the crunchy, earthy turnip, and the sweet, creamy squash.

On to the entrees. 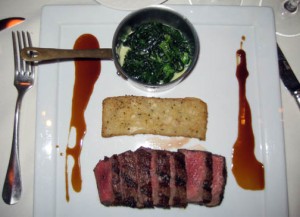 The red meat offering was a New York strip steak, perfectly seasoned and accompanied by a crispy, zesty potato terrine, and a buttery sautéed kale. A testament to the prowess of the kitchen, both orders came cooked as requested: a perfect pink medium for my mother, and a ruby centered, pink edged, medium rare for my boyfriend. The potato terrine was a revelation, seasoned liberally with lemon and zest, adding citrus punch to a classic crispy herbed potato. 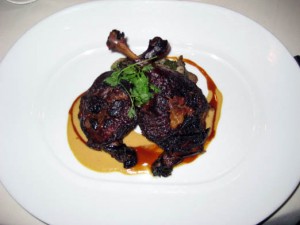 The poultry was a Crescent Farms braised duck legs in a Hudson Valley foie gras sauce, served with woody maitake mushrooms and fennel. This dish proclaimed umami, from the sublime richness of the foie gras sauce, the Chinese 5-spiced, richly braised duck legs, the robust and earthy flavor of the maitakes. The sweet and pickled fennel served as a palate cleanser and appreciated brightness in this rich dish. 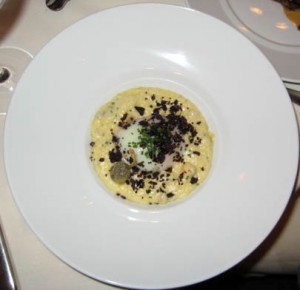 But by far, the most delicious of the four was the vegetarian offering: a perfectly poached local egg, nestled in the creamiest buttered Wild Hive grits, and sprinkled with crispy bits of black olive. Like treasures hidden in the grits, lay cubes of winter vegetables, adding to texture and earthy flavor to the buttery grits, velvety egg yolk, and salty, bright bursts of crispy olive. And though we’d all ordered entrees, the waiter gave us this one as a “side” portion, for a scant $6!

And finally dessert: “Bagel with Cream Cheese” was a whimsical reimagining of the breakfast favorite. We slathered cream cheese ice cream and jam on crispy, thinly sliced cinnamon raisin bagel chips. This dish may have bordered on the edge of too sweet, too rich, but saved by the perfect balancing element of citrus in the cream cheese ice cream. 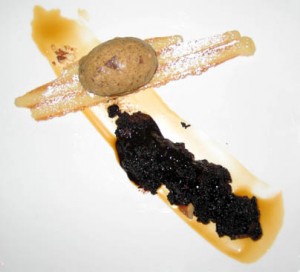 Three of the five of us ordered a Warm Brownie Pudding with coffee toffee crunch ice cream and roasted almonds. The plating was beautiful, the dessert warming and sweet.

But by far my favorite of the desserts, and overall favorite for the night was an offering entitled “Chunky Monkey” Bites – warm, crispy banana, walnut, chocolate chip doughnuts, offered with a coconut cream dipping glaze. These dougnuts possessed the ethereal qualities of freshly made zeppoli, light and fluffy on the inside, and crispy and rolled in granular sugar on the outside. The glaze possessed the most intense coconut flavor, creating festival of esters of rich banana and coconut. The dish offered six, and I could have eaten twelve. 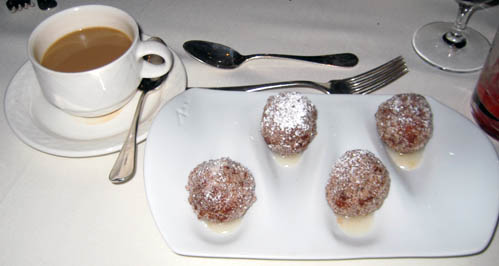 The Valley Restaurant is a hidden gem, nestled in the rolling hills of the lower Hudson Valley. The waitstaff is wonderful, the food wonderfully refined and effortlessly interesting. I will be back – perhaps even this week to take advantage of the unbelievable deal that is restaurant week. Oh, and by the way, the bread basket was out of this world!

The 411 on Valley at the Garrison.