People are reading
You are at:Home»Restaurants»Bistro Z in Tarrytown: Hudson Valley Restaurant Week 2011

Hi! Guest blogger Kristen Tregar here. My husband and I headed to Bistro Z in Tarrytown to sample their HVRW dinner menu. Despite living relatively close by, we had never been to Bistro Z and had no idea what to expect.

Bistro Z is located in the Doubletree Hotel in Tarrytown, just south of the Route 9 on-ramps to the Tappan Zee Bridge. It’s easy to find, and there’s plenty of parking. Particularly because we knew it was located in a hotel, we were curious as to what the ambiance would be like. There’s only one obvious entrance, so we headed into the hotel lobby and had a look around.

Bistro Z is located just to the right after you come into the doors. We were a bit surprised to find that it doesn’t have its own space, but rather occupies 3 large alcoves on either side of a hallway heading back into the hotel. The bar was set in a small alcove on the right of the hallway, with a lounge area across from it on the left. Slightly further down the hallway, we found Bistro Z also on the left side of the hallway. Lack of a clear separation from the hotel made the atmosphere a bit more casual than we were expecting. While it was a quiet weeknight (only 5 other tables were populated), we could still hear voices of people in the hotel lobby and the ringing of the lobby telephones. Perhaps because it was a quiet night, we ended up waiting for several minutes before we were greeted, and a couple more minutes before we were actually seated. The server that seated us was friendly and pleasant, though, and gave us our choice of tables. 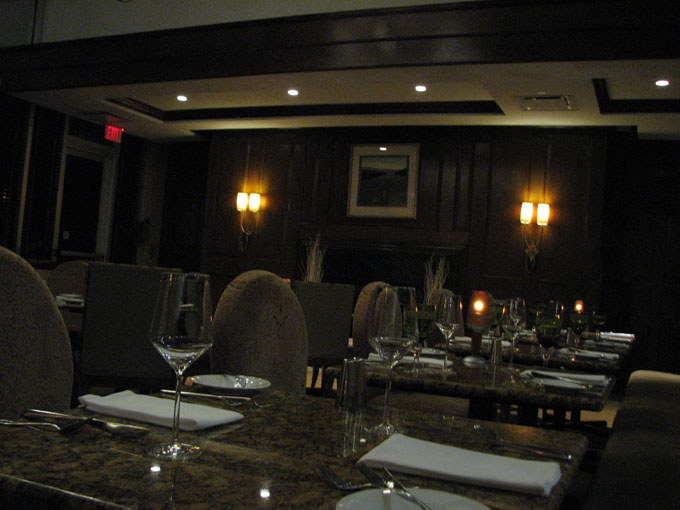 The view from our table

My husband is a teetotaler, so he stuck with water for the duration of the meal. Our server brought the menus, drawing our attention to the Restaurant Week menu. There was a reasonable selection of wines available by the glass, so I selected a glass of Domaine Saint Michelle. A basket of warm bread was brought quickly, along with some butter. Regarding the bread, I think it’s fair to say there are two kinds of bread people- those who like their crusts chewy, and those who prefer their crusts crispy-crunchy-crusty. If you are a chewy-crust bread person, the bread would have pleased you, but as crunchy-crusters, we were a bit less satisfied.

For the first course, I started with a porridge of polenta with wild mushrooms and truffle oil. The flavor of the truffle oil was unmistakably present but not overwhelming, and the pieces of mushroom were neither too large nor too small. The polenta itself was sweet, creamy, and smooth. 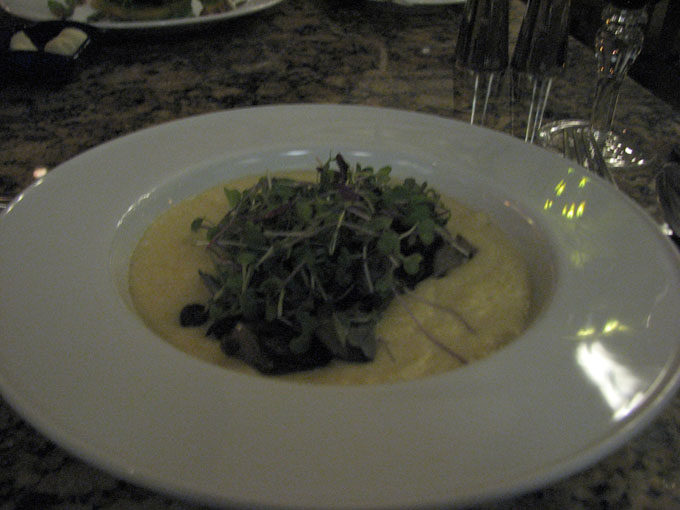 My husband went with the roasted butternut squash and baby arugula salad. In addition to the squash and arugula, the salad had candied walnuts and shaved ricotta salata. The arugula was fresh and peppery. The pieces of squash were a bit on the large size- good in terms of the amount of squash in the dish, but a bit unwieldy. All in all, the salad came across as sweet. The squash was sweet, and the candied walnuts were sweet. The sweetness overwhelmed the ricotta salata entirely, and even managed to block much of the zing of the arugula. That being said, my husband still finished the entirety of his salad, so the sweetness wasn’t totally excessive. 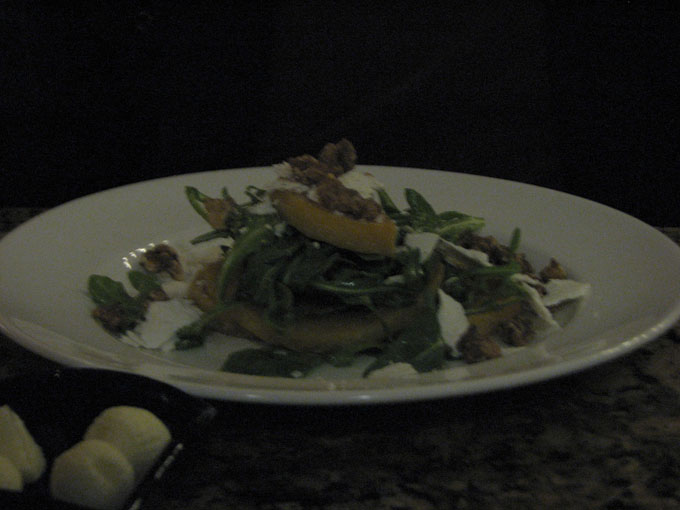 The main courses were promptly brought. I went with the short rib ravioli- two large round ravioli perched atop a mound of steamed baby spinach and sun-dried tomatoes. The ravioli were deliciously meaty and savory, with a (usually) smooth filling. I did find an entire pearl onion inside one of the ravioli- whether this was intentional like some sort of hidden prize or an oversight was not clear. The pasta itself was perfectly cooked. The spinach was simply prepared, and complemented the meatiness of the ravioli, while the sun-dried tomatoes added a touch of brightness. The portions were a reasonable size, although there were more sun-dried tomatoes than I might have included. That said, if you are a sun-dried tomato enthusiast, you won’t be disappointed. 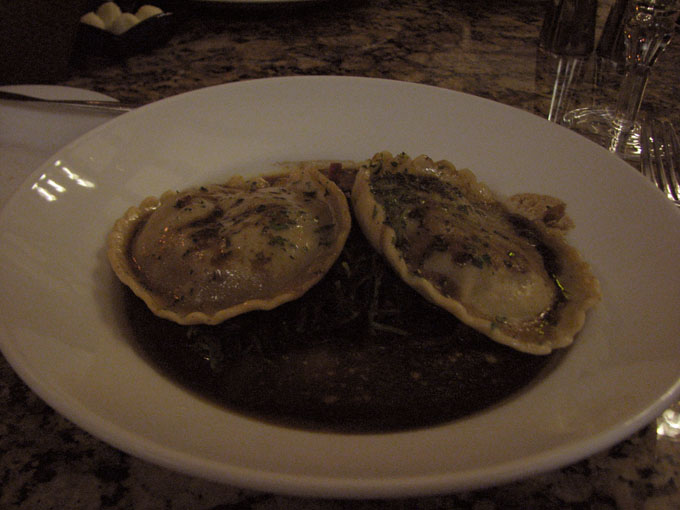 On the other side of the table, my husband selected the grilled salmon, accompanied by swiss chard and baby golden beets. The portion of salmon was generous, if a touch over-cooked. It was fresh and flavorful, and the beets and swiss chard complemented it well. There was plenty of swiss chard, but not as many beets as might have been appreciated. 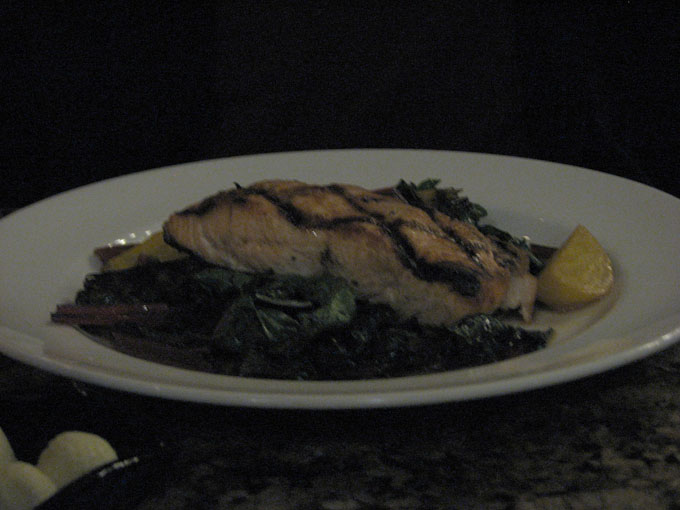 For dessert, I selected the chocolate espresso pot de creme, which was smooth and not overly rich. The flavor of the espresso was present but not excessive, and the vanilla-maple mascarpone added a light sweetness that complemented the chocolate beautifully. The mascarpone was decidedly on the firm side, perhaps a bit too much so, considering the lightness of the pot de creme. Overall, though, a very pleasant way to end the meal. 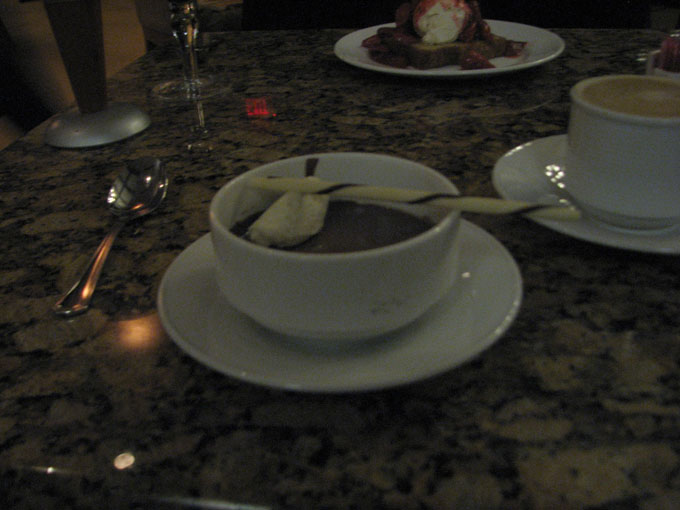 My dessert was accompanied by a latte, which was exceptionally good.

My husband decided to take the toasted lemon pound cake for his dessert. It was accompanied by vanilla ice cream and rosemary stewed strawberries. The pound cake itself was bright and had a very nice texture, not overly dense as pound cakes can sometimes be. It was served room temperature, and might have been improved a bit by being warmed a little before serving, especially to add more contrast to the ice cream. The strawberries were definitely unusual. Because they were stewed, they were a bit on the mushy side, and the rosemary flavor was quite powerful, to the point that you could smell the rosemary across the table. 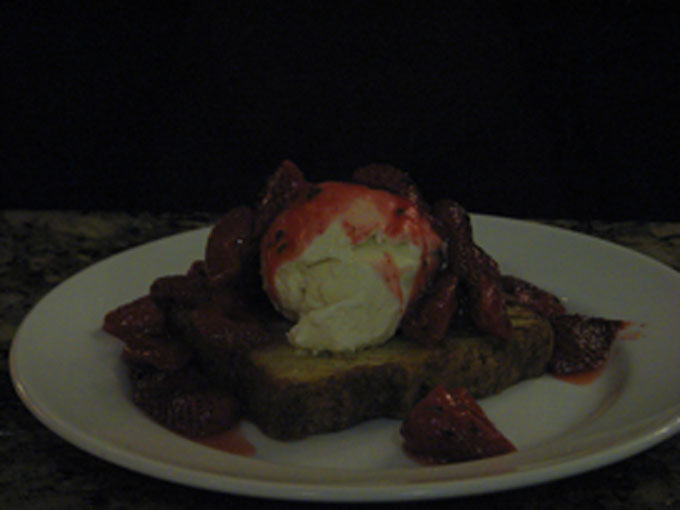 Overall, the experience at Bistro Z was a good one, with pleasant, attentive service that didn’t hover and food that was respectable. The atmosphere left something to be desired, though. Because of its location in the building, Bistro Z seems to suffer from a bit of an identity crisis. From the look of it, you’d expect more of the standard sports bar fare usually found in lobby restaurants. Bistro Z is trying hard, though, to be something more than its modest surroundings would suggest. If you find yourself in the neighborhood, either staying at the Doubletree or just passing through, don’t be afraid to stop by.