Sharon Pickett reporting back from French American Bistro (FAB) – my third and final HVRW blog. Rarely have I eaten so much in such a short period of time.  I need a rest. 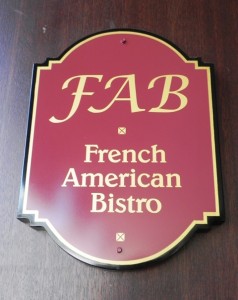 Well, you’re probably wondering – was FAB  fab? As in fabulous?  Not entirely, but it did have its moments.

FAB presented an extensive and ambitious HVRW menu. Eight appetizers, seven entrees and three desserts, with several vegetarian offerings among the starters, but none to be found in the main offerings.

My companion and I weren’t troubled – we’re omnivores all the way. 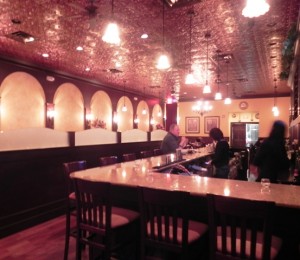 pub. Glowing wood, glittering chandeliers, an inviting bar and a dark pressed tin ceiling add warmth to the atmosphere. A small ramekin of white bean and rosemary puree was produced along with some crusty bread to spread it on. A nice touch.

We arrived somewhat early and the place wasn’t at all crowded. Although there was no one watching, the television at the bar was blasting a basketball game. March madness indeed!

For starters, I was leaning toward ordering the Provencal Moules – a bistro staple – until I was informed that no – they did not come with frites –a classic bistro pairing. I could, however, order them from the regular menu with a surcharge. Oh mon Dieu! 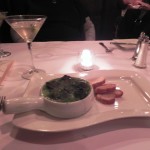 I decided on the escargot, or “garlic butter delivery device” as my spouse calls them. If you look closely at the photo, you will see that they arrived with something akin to melba toast, making it impossible to soak up all the garlickly goodness. I requested and received some crusty bread and all was good. The mollusks were plump and meaty.

My companion ordered the crispy mac ‘n cheese napoleon, an apparent attempt to blend American and French comfort food. Did it succeed? Not 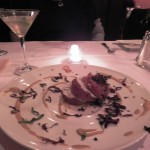 really. Two discs of macaroni and cheese were breaded and fried with a slice of mozzarella in between and with a bland vinaigrette on the side.

Her response to this dish was “This is not as comforting as I would think comfort food would be.”

On to the entrees. I chose the braised pork shank pappardelle and I was glad I did. The meat was cooked to a turn, falling off the bone and the fresh pasta 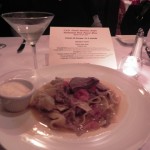 held its own with the robust sauce.

My companion opted for the coq au vin, French bistro food at its bistro-yness. The bird was tender and moist and the vegetables retained their crispness and individual flavor. 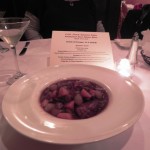 I am a sucker for any type of crème brulee. The almond crème brulee lacked the promise of almonds and the sugar had been carmelized well ahead of time (I love it when the custard is cool the brittle sugar is still warm). I’m guessing the restaurant does not have a staffer whose sole job it is to torch the crème brulee on demand. Quelle 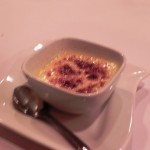 The chocolate mousse was my companion’s dessert of choice. She reported that it was too sweet and you couldn’t really taste the chocolate flavor. Zut Alors! 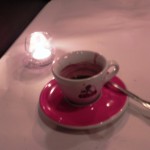 Do visit the French American Bistro.  It may not be FAB, but it can be pretty darn good.

P.S. The French American Bistro, like many bistros in France, is open for breakfast, as well as lunch and dinner. The breakfast menu consists of some intriguing sounding offerings such as create your own crepe with fillings such as spicy lamb sausage, ratatouille, grilled goat cheese and roasted red peppers and French Baguette French Toast Bread Pudding with maple syrup and strawberries.