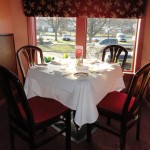 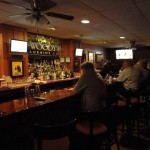 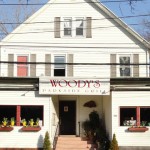 Maria Goldstein here to tell you to never judge a book by its cover. It’s a noble philosophy and a phrase that applies to Woody’s Parkside Grill in Sparkill, New York. If you were looking for a place to eat you might drive right by it and that would be a mistake.   Chef Deborah Lovrich and her husband Woody, the restaurant’s namesake, made sure that my family and I enjoyed one of the best meals we’ve had in a long time.

As soon as we walked through the door we found ourselves in the bar area that looked like a decent place to hang out for a beer if  the game is on or for a cocktail while you’re waiting for a table.  The interior is split down the middle with the bar on one side and a small dining area on the other.

The prix fixe menu they’re featuring for Restaurant Week has a diverse selection of delicious-sounding options so I decided to give it a try while everyone else ordered off the regular menu.  Once we made the difficult decisions about what to eat we were treated to complimentary bruschetta.  The bread was toasted and crispy and though it was hard to take a bite without the most of it falling to the plate, I loved the balsamic infused tomatoes. 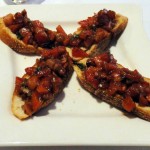 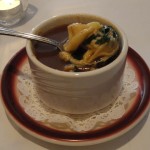 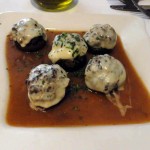 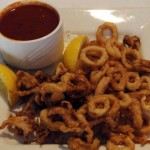 Here’s a rundown of the appetizers we ordered and the verdict on each:  My husband had the Tortelloni Soup with a broth that had a smoky, dark flavor, much like a French onion soup.  I started with the Baby Bella Mushrooms made with spinach, tomato, garlic, fontina, and madiera.  They were delicious!  The stuffing was soft and flavorful and was topped with just enough saltiness from the cheese.  I didn’t notice the tomatoes but the sauce gave the mushrooms a gentle push to the savory edge without going overboard.  My kids ordered the Fried Calamari which was “nice and crispy.”  (Unfortunately, every piece was consumed within minutes of taking the picture so that endorsement is strictly heresay.) 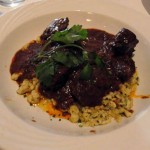 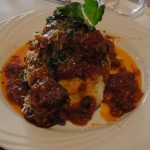 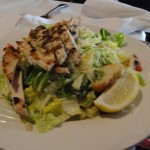 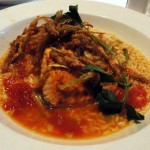 Hungarian Goulash was my husband’s entree of choice with stewed beef, onions, paprika, and homemade buttered spaetzle.  He raved how good the beef was – it was soft, jucy and fell apart easily.  The smoky sauce, the savory stewed meat and the buttery sweet spaetzle was a perfect combination.  He even said that “it tasted like something my grandmother would have made.”

My son opted for the Slow Braised Beef Short Ribs Bracciole with bread crumbs, parmigiano reggiano, and whipped potatoes.  The ribs were tastythough the amount of meat was disproportionate to the mountain of whipped potatoes that was served with them.  The texture was light and didn’t need a shake of salt at all – in fact the salt and pepper shakers went untouched throughout the entire meal.

My daughter ordered the Caesar Salad.  The portion was generous, the dressing was light and did not overwhelm the romaine.  I prefer a brinier flavor in my Caesar dressing myself but my daughter liked it very much.  The chicken was simply grilled and would have been a little easier to eat if they were cut into more bite-sized pieces but other than that, it was easy to navigate.

The best part about the Pan-Roasted Atlantic Salmon I ordered was the crispy leeks that topped the dish.  It added a nice crunch and saltiness to the salmon, which was moist and cooked perfectly. The orzo with tomato saffron lobster broth was a nice surprise and balanced out the flavors overall. 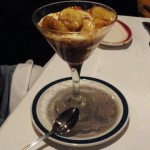 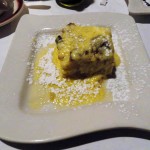 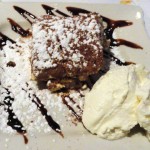 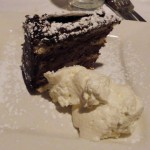 Woody’s dessert selections were the perfect end to a great meal.  We each ordered something different and tried them all.  Let’s start with the Bananas Foster:  Wow!  What else is there to say about a dessert that has slices of warm bananas, vanilla ice cream, and a bit of rum?  The small portion of this sugary sweetness is all you need.  It took the #1 spot on our Top Four Desserts of the Night list.

It must be said that 2nd, 3rd and 4th place on the list is nothing to sneeze at.  Case in point, the Warm Pear & Ginger Bread Pudding I ordered. The chunks of warm pear together with the gingerbread was a unique flavor twist to one of my favorite desserts.  My husband said it tasted like a piece of gourmet French toast.  The only downside for me was visual.  The bright yellow hue of the crème anglaise was a bit off-putting but did little to stop me from cleaning the plate.

The Tiramasu with chocolate sauce had a light coffee flavor and the cream was light on the sweet, which was a stark contrast to the super-charged sweetness of the Bananas Foster.  The fresh whipped cream on the side put this dessert over the top.

My son ordered the Chocolate Mousse Cake without the raspberry sauce – much to my disappointment – but the same whipped cream that was served with the Tiramisu did a great job of dressing up the dessert.  Though the next time we visit, I’ll make sure that raspberry sauce is part of the deal.  I would imagine that is the secret ingredient that elevates a good dessert to an amazing dessert.

I learned towards the end of the meal that all the desserts & whipped cream are homemade except the chocolate mousse, which is provided by Le Gateau Suisse Bakery in Orangeburg, NY.

Throughout the evening, Mr. Woody Lovrich came to our table to check on us and called me by name each time, which added to the homey and friendly atmosphere.  Our server, William, was attentive without being intrusive.  Mr. Lovrich confessed that he was a bit short staffed that night but we never noticed.  He and William made sure that we were well taken care of.

We’ll definitely be back.  So, the next time you drive through Sparkill, don’t blink because you might just miss out on a great meal.

The 411 on Woody’s Parkside Grill.