Hi everyone, this is George Distelhurst guest blogger for Hudson Valley Restaurant Week 2011.

Armed with notepad, pen, camera… a never ending appetite… and a 1:00 pm reservation, my girlfriend Brett (also a HVRW guest blogger, check out her awesome review of Peekskill Brewery!) and I made our way to Cathryn’s Tuscan Grill located in Cold Spring.

For me, HVRW is a mix of “let’s try something new” and “let’s go back to a place we love”.  Cathryn’s fell into the latter group.  Our first visit, for HVRW 2009, was wonderful, so much so that we made a return visit in 2010 when we were just passing by after a day of wine tasting. Here we were again, HVRW 2011, ready to end another crazy two-week dining extravaganza with a bang by going to a tried-and-true favorite.  It’s a time to enjoy some of the finest food our local restaurants have to offer and it also gives the chefs a showcase to highlight their vast talents while sticking to the unbelievably bargain priced prix-fixe menu. 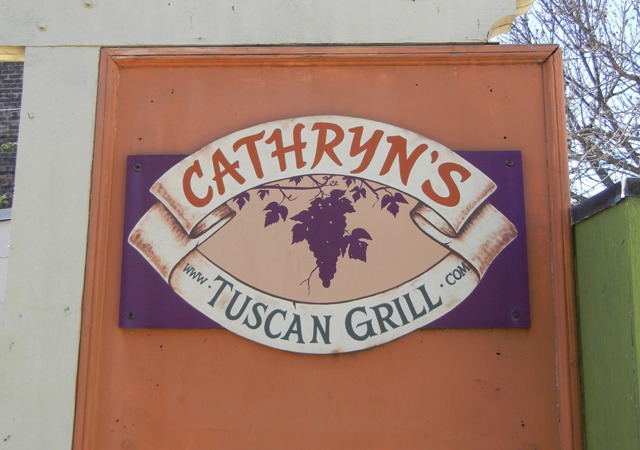 Undeniably part of the charm of Cathryn’s is that it’s located on Main Street in the quaint village of Cold Spring. While not offering waterside dining, it’s hard to pass up a walk down Main while enjoying the scenic view of the Hudson below.  As we made our way through the courtyard entrance Sunday afternoon, we were warmly greeted and quickly shown to our table.  Cathryn’s is a unique restaurant made up of four distinct rooms each with its own personality and vibe. 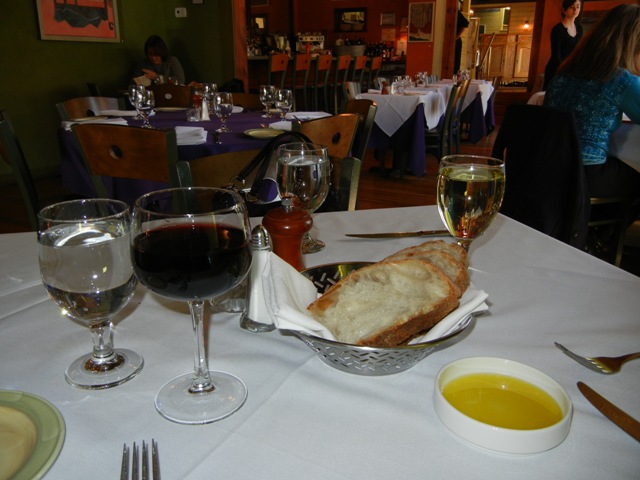 The HVRW menu listed four choices per category.  For starters I chose the Soup of the Day, which was Potato Leek, while Brett had the mixed green salad with goat cheese.  The soup was very good with a decent balance of potato and leeks. 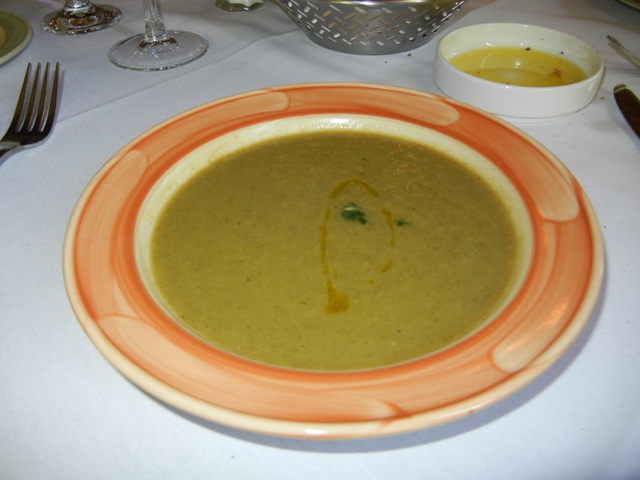 Brett’s salad, for lack of a better phrase, seemed more of an afterthought, and while fresh tasting could have used an extra piece of goat cheese or two to liven up the plate. 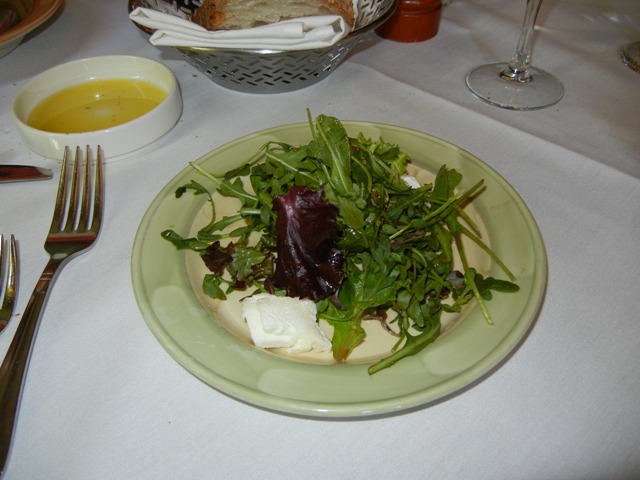 For entrees we both chose the Sausage Frittata made from farm fresh eggs and served with pan roasted potatoes.  The frittatas had a buttery taste and were lightly seasoned with herbs.  The potatoes were good. 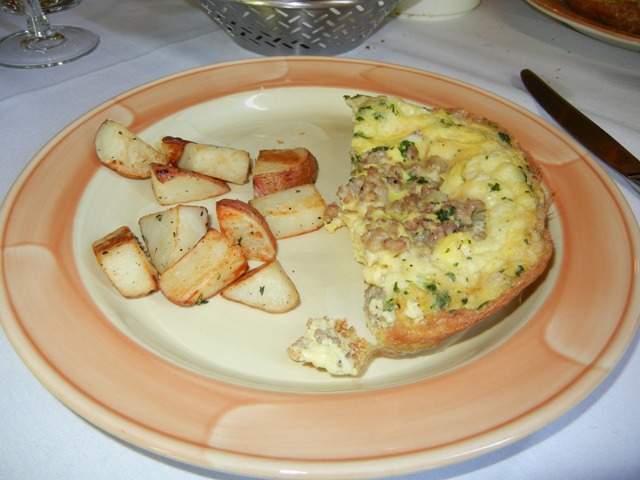 But the overall appearance of the dish left us wondering if something was missing.  Perhaps it was the way it was plated? The presentation seemed lacking. While you can’t argue over the generous sized frittata filling half the plate, the potatoes definitely were challenged to fill the other half of the plate on their own, and left our dish appearing half-eaten when it arrived. But there was also a problem with consistency. Where my dish seemed packed with sausage, Brett’s dish was severely lacking.

For dessert I went with the Warm Apple Cake while Brett opted for the Chocolate Lava Cake.  Here too the plating seemed off from what we have come to expect from prior visits and also from other restaurants we have dined at.  The chocolate lava cake, as expected, was warm through and through: 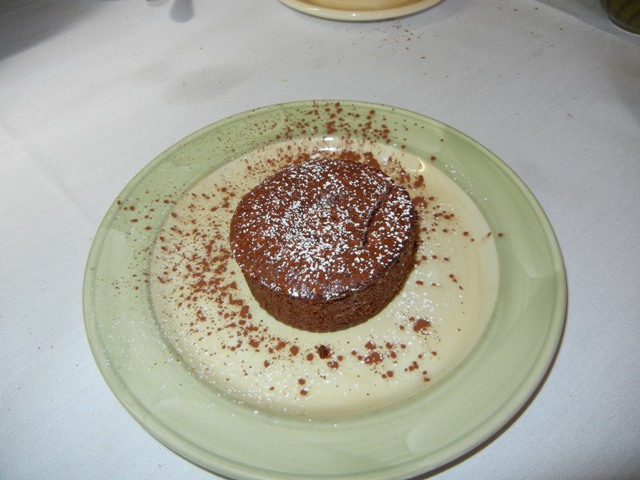 But the apple cake was suffering from a stint in the microwave that left the top edge hot but the apples still refrigerator cold. 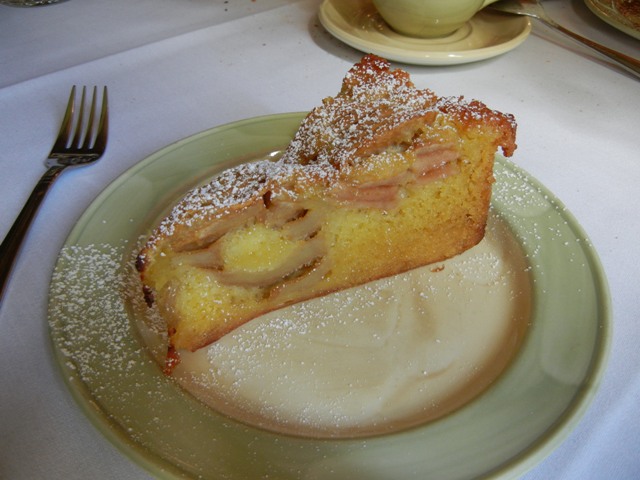 As a wrap-up… it’s not “harsh” criticism I am trying to offer by any means — just the thought that when you find a restaurant you love (as was the case with Cathryn’s) and the overall consistency just doesn’t live up to your expectations, it’s more of a disappointment than when you try a place for the first time and it falls short.

With so many restaurants raising the bar sometimes being “as good as before” is not only a hard target to hit. but perhaps not as satisfying as well.  Would I go back to or recommend Cathryn’s… probably.  Would I also be interested in trying any of the other fine restaurants the area has to offer… isn’t that what we’re here for!!