People are reading
You are at:Home»Restaurants»Haven in Pleasantville: Hudson Valley Restaurant Week 2011

Elissa Fisher here, reviewing Haven in Pleasantville.  My dining partner and I arrived for a 6:30 reservation on a Thursday evening.  We were greeted warmly by manager Theresa McCarthy and seated immediately.  The ambience was clean, simple, and inviting.  Banquettes lined one wall, the comfortable bar with seating for six was along another, and tables were appointed with fresh flowers, candles, and woven placemats.  A pressed-tin ceiling, pendant and track lighting, and walls displaying abstract and nature- themed artwork  complimented the setting.  Jazz played unobtrusively in the background and lights were dimmed, but not so much as to impede one’s ability to read the menu.  Many of the tables in this restaurant that seats sixty were already occupied by diners. 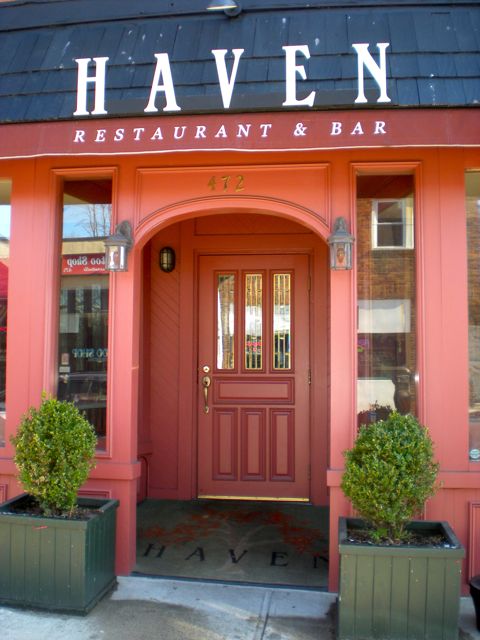 We sat comfortably at a round banquette towards the back, and were offered a drink while we perused the menus. 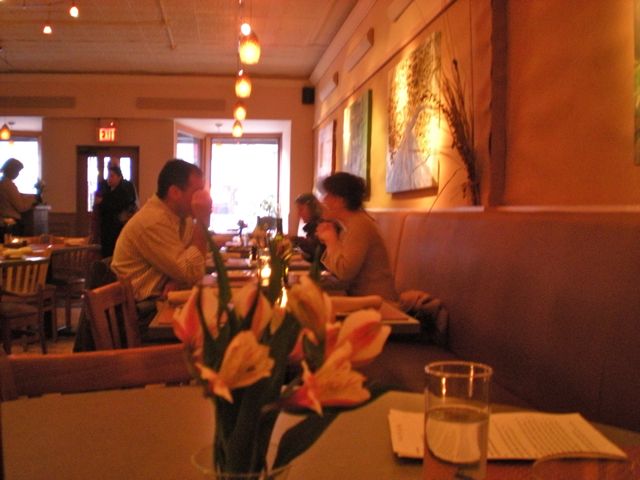 Cocktails from the well-stocked bar included seasonal specialties. The wine list was extensive and informative. 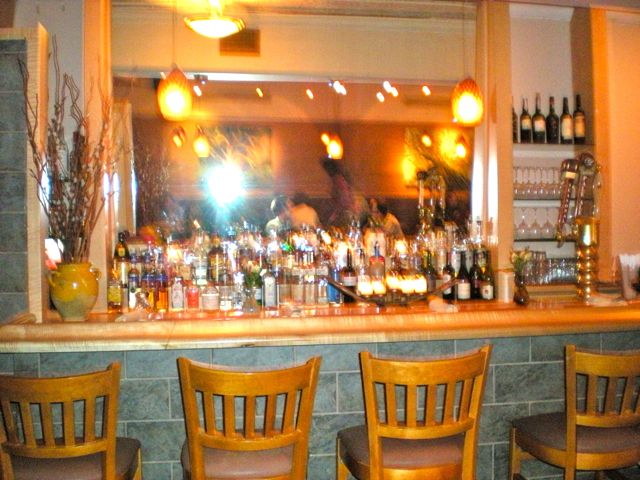 A choice of three beers was available on draft, as well as an internationally crafted selection of bottled beers We both ordered Grey Goose martinis with olives, my companion’s being “dirty”, and mine being…clean? 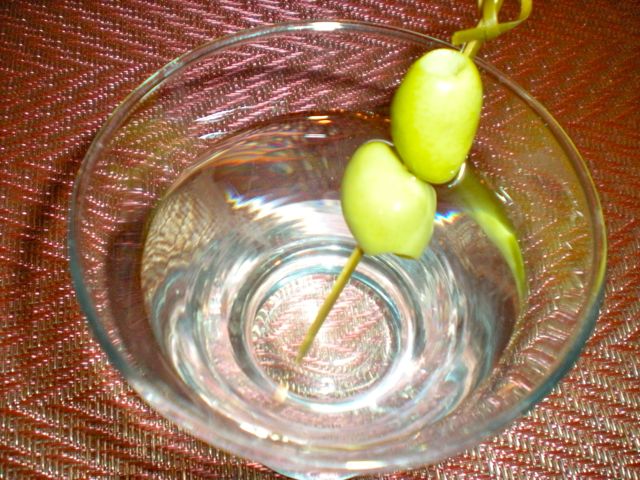 My companion was happy to report that her martini was just right, not too clean, and definitely not filthy, which is what happens when too much olive juice is added.  I agreed that mine was perfectly chilled and very dry, just the way I ordered it.  Freshly made hummus and house-made spinach and sun-dried tomato pita chips were complimentary and delicious. 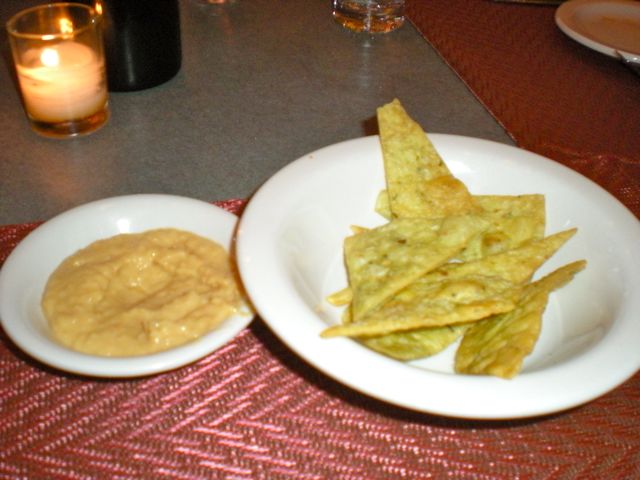 House made pita chips and hummus

Haven offered both the regular menu, which is quite extensive, and the HVRW menu.  The menus had vegetarian, meat, poultry, and fish offerings. The HRVW lunch menu offered a vegan soup or salad as an appetizer, a vegetarian ravioli and four other entrees, and two desserts.  The HVRW dinner menu offered the same soup or salad for appetizers, four entrees, and three dessert choices.  We were a little disappointed that soup or salad were the only offerings for appetizers on the HVRW menu. Chef Daniel Petrilli is known for his creative,flavorful cooking, in which he incorporates seasonal, farm-fresh ingredients, and I was hoping that he would showcase his talent by having more appetizer selections on the HVRW menu.  (I was secretly hoping that the ravioli would have been a choice).

I ordered the mixed baby greens with citrus vinaigrette, and my companion, the soup, which happened to be white bean. 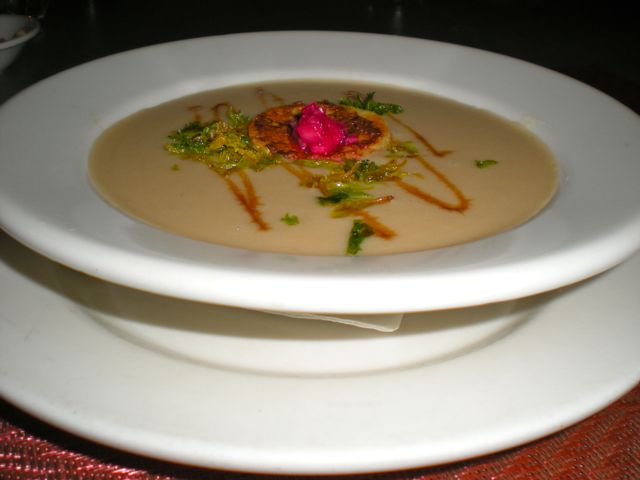 Her soup arrived, garnished with chopped herbs and a seasoned oil.  A blini, crisp on one side, soft on the other, floated on top of the satisfying soup.

I am not one to be known as a salad lover, but this one was delicious and I finished each morsel. 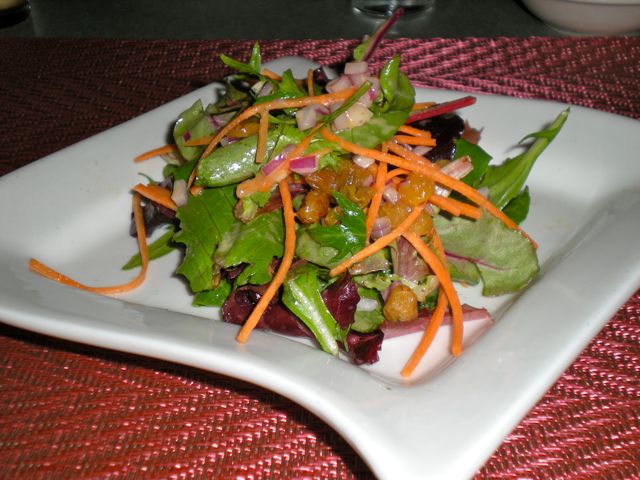 The salad consisted of crisp mixed baby greens, shredded carrots and a bit of onions. The surprise appearance of golden raisins rounded out the salad, which was tossed with a delightful citrus vinaigrette.

Chef Dan Petrilli then sent over a tasting of an amazing roasted fennel, smoked apple, and broccoli ravioli, accompanied by a velvety curried carrot puree. 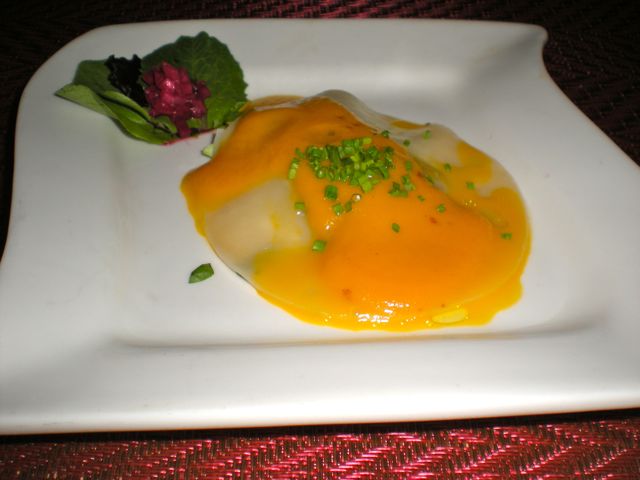 It was absolutely incredible, the smokiness of the apples really coming through, yet allowing the flavor and texture of each ingredient to announce itself and compliment the other components of the dish.  I was delighted to have had the opportunity to sample this.  Maybe next year it will be included on the dinner menu as an appetizer.

We ordered our entrees, and I asked Theresa to suggest a wine to go with my grilled petit filet of beef with garlic whipped potatoes and red wine demi-glace.  She suggested the 2009 Cline Cellars Zinfandel from California.  The wine was bursting with the flavors of black cherry and raspberry, with a finish of vanilla.  My companion ordered a 2009 Chilean sauvignon blanc to accompany her pan-roasted breast of chicken with rosti potato and barbecue.

Dinner arrived, and both dishes were beautifully plated.  My companion’s chicken was moist. 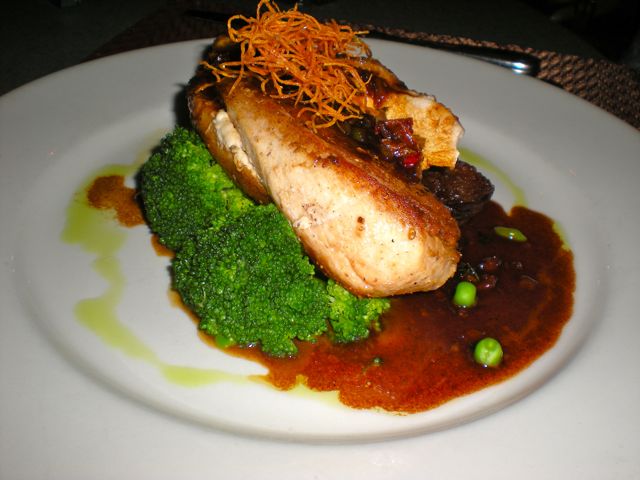 She loved the crispiness of the rosti potato, and the broccoli that garnished the dish was perfectly cooked to a brilliant green.  The barbecue sauce was flavorful, yet a bit salty for her palate.

My filet of beef was faultlessly executed. 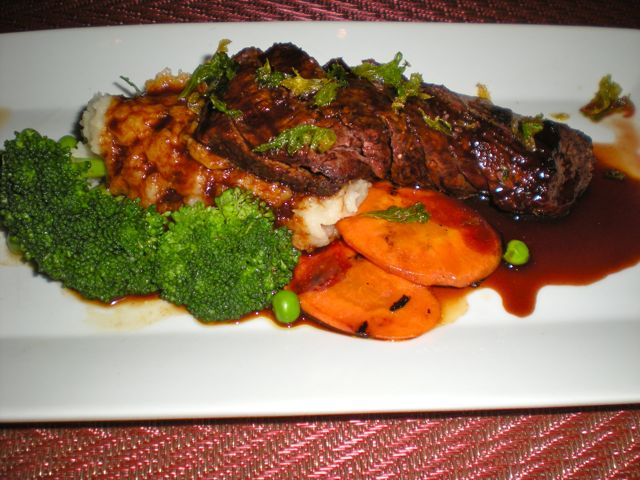 It arrived medium as I had ordered, and rested on a bed of gently seasoned garlic mashed potatoes.  Carrot coins, broccoli, and peas, fresh and maintaining their bright flavors and colors, finished off the plate.  The filet was fork-tender and delicious, and the red-wine demi-glace was a fine addition, but the reduction did produce a taste that was just a bit salty for my palate. 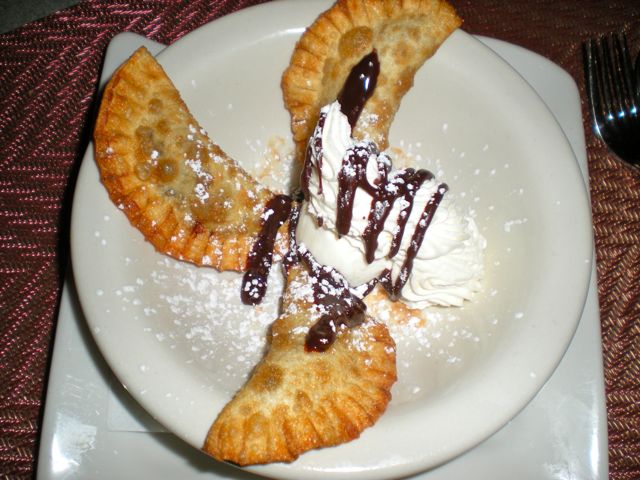 She was most delighted to report that they really WERE empanadas, little half-moons, crimped on the edges, containing a sinful nutella center. 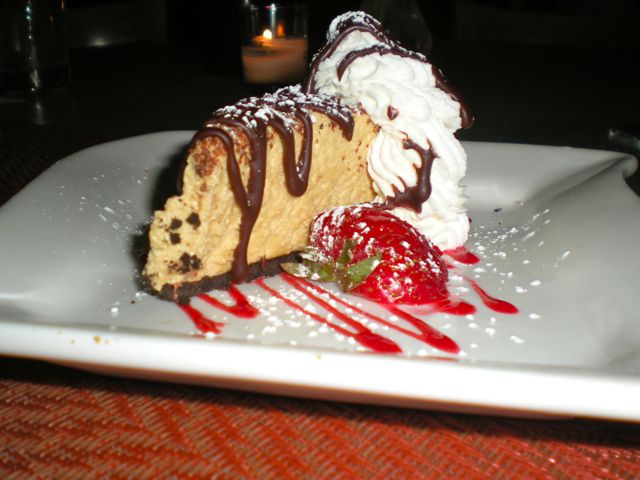 Chocolate cookie crust, ethereally light mousse that packed a perfect peanut-y punch, garnished with a sliced strawberry,  whipped cream, and strawberry and chocolate sauces-wow!  An espresso and a machiato finished out the meal.

Check out Haven for yourself to sample creative dishes made from fresh, local ingredients.  Haven just recently added lunch service.  Its convenient location, only a hop (not even a skip and a jump) away from MetroNorth, was not mentioned in the HVRW brochure.  Metered parking is available on the street, as well as at the municipal lot by the train station.