People are reading
You are at:Home»Restaurants»Rainwater Grill in Hastings-on-Hudson: Hudson Valley Restaurant Week 2011

Guest blogger Danielle Plass here with my final post for Restaurant week. I am more than a little sad as I enjoyed this experience immensely and I am already looking forward to HVRW 2012. Many thanks to Liz Johnson for inviting me to participate in such an exciting endeavor and many, many thanks to my photographer, Kelli Wells from Brought to Life Photography for making me look so good with her amazing photographs. 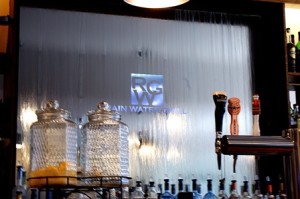 I have been dying to try the Rainwater Grill in Hastings since it opened in 2009. The restaurant can be summed up in one word: charming. The restaurant is located on Main Street in this idyllic river town, surrounded by eclectic shops and antique stores. It is situated next to a public lot but allow extra time to wait for a spot to open up.

We had lunch reservations but surprisingly the Restaurant Week offerings were quite extensive and featured items offered on their regular dinner menu.  We sat in the bar area as there was a bridal shower in the main room, but the bar is just as charming and of course includes their famous waterfall.

Water and bread were provided immediately and speaking of charm, I had to include a picture of the salt and pepper…..just precious. It’s after the jump. 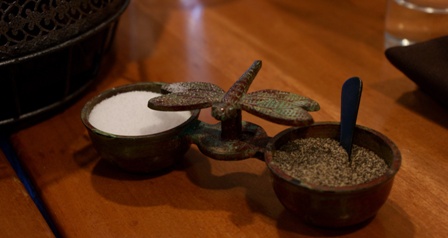 Three of us ordered from the Restaurant week menu, so I had the opportunity to taste three of the appetizers: the Grilled Artichoke Hearts Crostini with garlic herb butter, the Seared Tuna with soy vinaigrette and the Prince Edward Island Mussels with white wine, green peas, crispy bacon and fresh herbs.  The crostini was good — 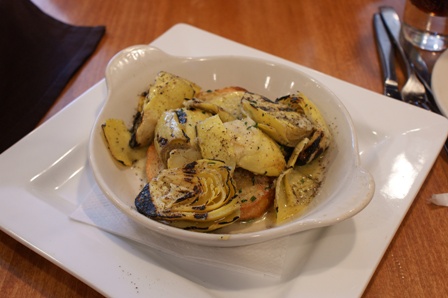 — the artichokes were meaty and nicely grilled, but the butter sauce was a bit heavy. 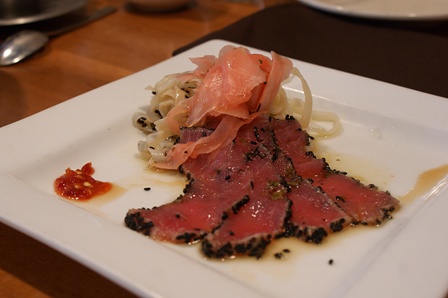 was accompanied by fresh ginger and rice noodles and was quite tasty.

The winner of this course was the mussels, we would not allow them to clear it until we had eaten every bite! 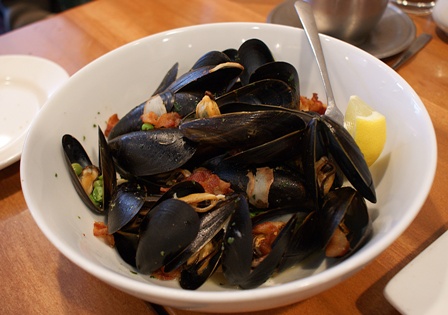 The bacon was in fact perfectly crisp and shaved garlic offered a slight kick to the dish. The bread underneath soaked up the sauce….delicious!

For our main course, we ordered the Hanger Steak with grilled asparagus and shoestring fries and the Potato Crusted Salmon in Lemon caper butter sauce with sautéed spinach. 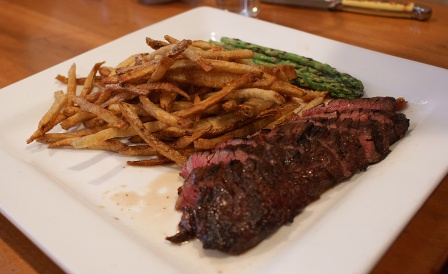 — was beautifully prepared and presented, though I felt it should have been marinated or accompanied by some sort of sauce.

The winner here was the salmon: 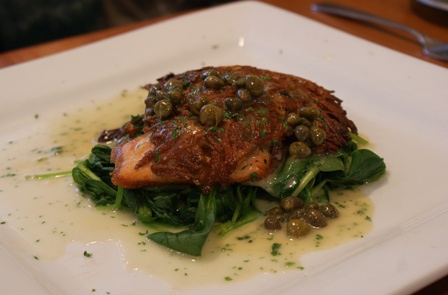 The potato crust can only be described as heavenly and the salmon, which can be tricky, was cooked to perfection.

For dessert, we had the Cheesecake and the Apple Crumble with Raisins. 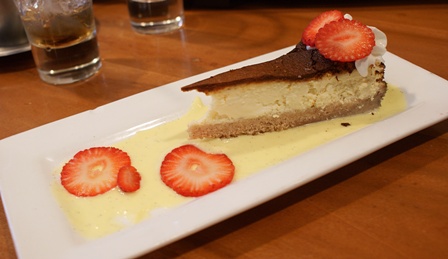 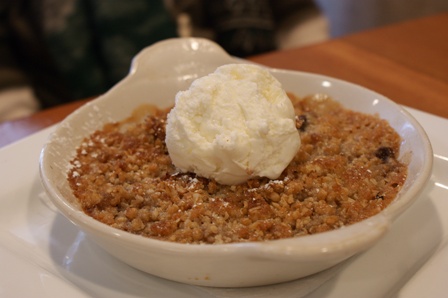 This round was a tie, as the cheesecake had an interesting  Panko breadcrumb crust rather than the usual graham cracker crust.  The apple crumble was wonderfully warm, sweet and crunchy, topped with vanilla ice cream….just lovely.

It is worth mentioning the service was just outstanding, we never ran out of water, soda or coffee and our waiter was very knowledgeable…describing the dishes without being asked.  We will definitely return and I am very anxious to try everything on the menu!

The 411 on Rainwater Grill.