People are reading
You are at:Home»Restaurants»Caravela in Tarrytown: Hudson Valley Restaurant Week 2011

Sailing Away on a Sea of Portuguese: Caravela’s Lavish Meal 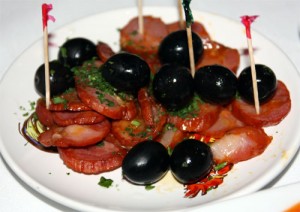 If its longevity indicates anything, it is that the food at Caravela is simply spectacular. Rachel Seebacher here, reviewing my third restaurant for HVRW ‘11. Caravela, located in the heart of Tarrytown, has been serving innovative Portuguese and Brazilian cuisine for 25 years. Caravela is a classy joint, the kind of a place that as you sip vinho verde, they put the bottle on ice nearby; the kind of place that brings out endless plates of black olives and chorizo to nosh while you await your appetizers. 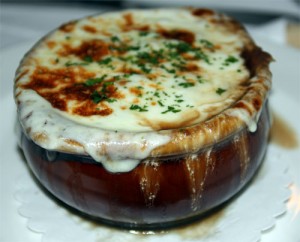 For an appetizer, my mother ordered the most traditional of the offerings, an onion soup gratinee. This soup was traditional perfection. First impression of the delicious soup to come was the perfectly caramelized, thick layer of Gruyere, which spilled over the edges of the ramekin. Breaking through with a spoon, the crouton was buttery, the onions tender and sweet, and the beef broth hearty and rich. 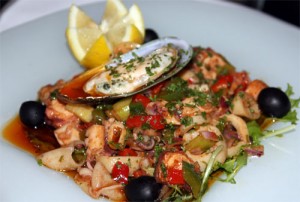 I ordered a seafood salad appetizer. It was bountiful, arriving as a generous helping of tender octopus, squid, large shrimp, and mussels. The salad was delicate; the seafood was perfectly cooked, garnished with a dice of bell peppers, onions and celery, and simply dressed in oil and sherry vinegar. 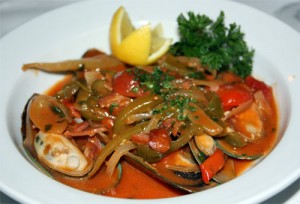 My boyfriend, sister and father ordered the steamed New Zealand Mussels. The mussels were served in a tart and robust tomato and beer broth, made smoky and piquant by chorizo. The mussels were plentiful, large and juicy, meaty enough to stand up to the powerful flavors of the beer and chorizo.

Caravela’s generous portions continued on through the entrees.

My sister and father order the Paella, a giant bowlful of steaming saffron rice, festooned with clams, mussels, shrimp, chicken, pork and chorizo. This paella was unbelievably moist, and rich. It was smoky, creamy and luscious. The flavor of saffron was mild, while red bell peppers added brightness, balancing the sumptuous banquet of seafood, poultry and pork. 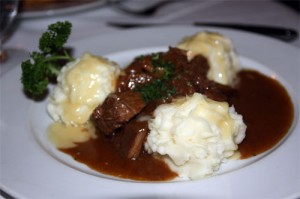 My boyfriend ordered the Veal Stew Caravela, a lavish affair of tender veal, roasted shallots and Madeira wine sauce. The veal was braised to the point of falling-off-the-bone tender; the shallots roasted whole until caramelized and fringed with char. The meat, shallots and velvety and rich sauce lay between pillow mounds of creamy mashed potatoes, topped with melting pats of butter. 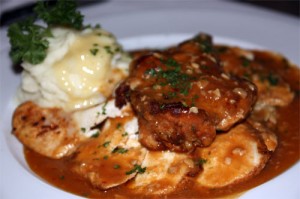 My mother and I ordered the Pan Roasted Half Chicken Macao, a spicy piri-piri marinated chicken, swimming in garlic sauce and accompanied by mash potatoes and orzo. The chicken was juicy and moist, particularly the breast meat. The garlic sauce was smooth, rich and perfectly piquant. 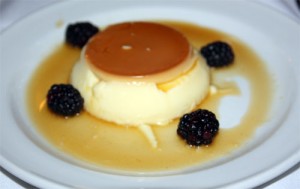 By the time we reached dessert we were absolutely and completely stuffed full of wonderful Portuguese cuisine. That did not stop us from trying the house-made Flan with berries, and the imported Chocolate Cake and Berry Tart. 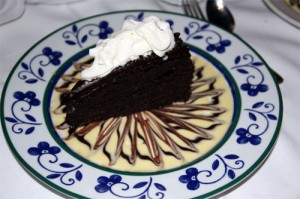 The flan was my personal favorite, light as air and cooling. The creaminess of the custard was balanced perfectly by the caramel topping. 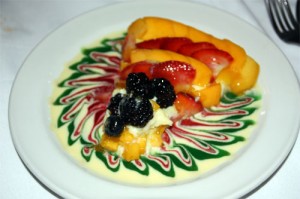 Finally the berry tart presented as a custard-filled sugar cookie crust, adorned with perfectly ripened sliced mango, strawberries and whole blackberries. This tart was refreshing and sweet, and a wonderful end to a lavish meal.

Caravela captures a gracious Old-World ambiance through its fresh and robust dishes, simply prepared and beautifully presented. Though restaurant week may be over, Caravela will be celebrating its 25 years of serving Portuguese and Brazilian Cuisine to the Hudson Valley all year. Stop on by and experience their hospitality and savory cuisine for yourself!