People are reading
You are at:Home»Restaurants»Chuggin’ Rhino in Pomona: A Q&A With Chef Dennis Cruz

A promising new gastropub has opened in the former Mount Ivy Pub spot on Route 202 in Pomona. Owner John Rodriguez, a fifth-generation North Rocklander, says he’s tired of pretentious restaurants — and he’s frustrated with having to put on a shirt and tie and driving across the river to Westchester to have a good meal. So he’s out to break the rules of what a bar is capable of doing. 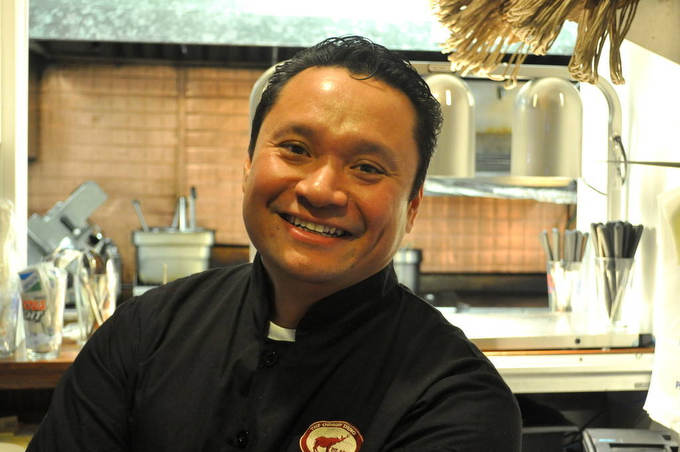 — a former chef at Wasabi in Nyack, and set about to serve fun bar food, with appetizers such as Meatball Martini (pork and veal meatballs in a marinara martini with shaved pecorino) and Cream Corn Bites (nuggets with whole corn kernels served with wasabi mayo) and burgers (like the Saddle River Burger, an 80-20 mix of chuck and brisket that’s topped with a housemade bourbon-barbecue sauce and thick slices of cheddar. As for entrees, how does the Bad Ass Double-cut Pork Chop grab you? It’s a pork chop, panko-breaded and served with blueberry sauce, truffle mashed potatoes and vegetable ragu.

The interior looks like a roadhouse mixed with a suburban backyard, with tall tables, a few booths and 66 seats at the bar. A wooden fence and concrete pavers set off the booths along one side of the restaurant and a shingled roof hangs above the bar.

It’s an outdoor theme, he says, because the best times he’s had while having a few beers were with his buddies on the back deck or the porch. So he designed it to feel as though he’s in that scene. Rodriguez has high hopes for the concept — he says he’s trying to build a brand here, not just a bar.

To that end, the food has to be really delicious. Cruz, who grew up in Hillcrest, went to the French Culinary Institute in Manhattan and cooked with Alfred Portale at Gotham Bar & Grill before working at Wasabi. Hudson Valley Metromix’s Maureen Fleming sat down with Cruz to find out what’s going on behind the kitchen door.

After the jump, Maureen’s Q&A:

What is the concept behind the menu?

A restaurant for the blue-collar worker where they can afford a great meal. You don’t need to go fancy or dress up, but food-wise it’s comparable to an upscale restaurant. You get an amuse bouche when you come in, there is gastronomy foam. It’s an eclectic menu. The area has Latin Americans, a lot of Asians — Asian meaning Pakistani, Indian, Filipino, and we want to hit it all food-wise. You know, we have the pollo guisado, we have the Shanghai egg rolls. The rib-eye kabobs are something I grew up eating in the Philippines. My grandmother would make them for holidays. And then you have your American burger that you eat with two hands. A lot of people come in expecting just a bar and say, “Wow.” And that’s what I want.

How old were you when you started cooking?

I was 15. My mom is a dietitian and chef. My grandmother is a chef. She ran her own restaurant in the Philippines. She taught me to have a good palate. She’s the one who inspired me the most, my grandmother. On my mother’s side everybody’s a great chef. I grew up with eight women and they’re the ones who molded me to become who I am today and I thank them for that. I am who I am because of them. I finally came here in ‘81 when I was 13. That was a culture shock, coming to this country.

What was the biggest adjustment for you?

What made you decide to become a chef?

Right away I knew I wanted to cook. At home you see your family cooking and it’s like, I want to cook as good as them. How do they do that? Filipino cooking is different because it’s a lot of process. It’s not like you saute things and you put sauce on it and it’s done. Filipinos braise things and layer their food with different ingredients for one dish. And with me going to the French Culinary the technique is different, it’s a Filipino dish but I’m twisting it.

What do you cook when you’re at home?

Now that it’s a little cooler, soups. Sinigang na baboy is a Filipino sour soup made with tamarind, pork, broccoli, radish and Japanese eggplant. It’s stewed almost. And it’s the favorite soup of my two sons. They already have great palates. I take them to Restaurant X in Congers for brunch and they sit down. I want to pass down what my grandmother passed on to me.

Any kitchen tools you can’t live without?

A great chef’s knife. And a nice Japanese mandoline. And a Chionis strainer.

What’s your favorite dish to cook at the restaurant?

It seems like you are getting to play a lot with the menu.

Johnny (Rodriguez) and I are kind of a perfect match. It’s kind of weird. Because Johnny, in the beginning, he didn’t know me. I’m really happy here. I’m closer to my family. He lets me run with things. And so far I’m wowing him and the clientele. And I have free range. And as a chef that is like dream come true. Because of that there’s a lot of testing.

Yesterday he wanted a five-alarm burger. So we put pepper jack cheese, slices of jalapeño, and I made this pepper coulis for the burger, then put some roasted pepper mayo and salsa on top.  John was sweating and he loves spicy stuff.  He wants it on the menu. John and I, we somehow understand each other. I work well with him. And the fact that the chemistry is there, that’s making me work harder and put in more time. Because he’s building a brand, not just a restaurant. We’re a good fit.