People are reading
You are at:Home»Restaurants»Crew Restaurant in Greenwich: Hudson Valley Restaurant Week 2011

Hi all, Maria Reina here reporting on my last HVRW restaurant. I’m kind of sad to see this all come to an end. I’ve had a lot of fun eating at, and reading about, some great restaurants.
So let’s get to it: my husband Larry and I were excited to try another restaurant that we haven’t been to. Crew is located a little off the beaten path, in Greenwich, just a stone’s throw from the train station. We were also really happy to have our friends, Nadine and Kevin, join us. We were able to try just about everything on the HVRW menu that was offered. Always a plus in my book! The HVRW menu offered several dishes from the regular menu, and we noted that the chef uses many artisanal ingredients from local farms. 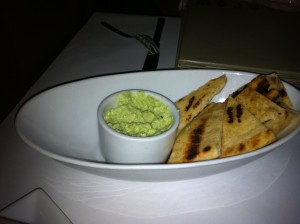 They started us off with a signature dish: their Edamame Hummus. This tasty dish was a great way to start off the meal with our drinks. 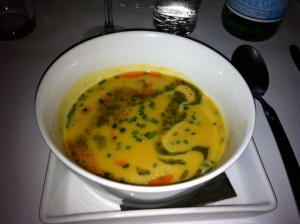 The first course was a toss-up, but I think Larry had my top choice: a Butternut Squash Bisque that had bits of crispy pancetta in it and a drizzle of basil pistou. I loved the combination of the smoothness of the soup with an occasional crunch. 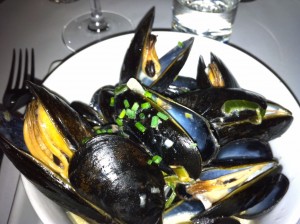 A close second was the Steamed Mussels in cream with grilled rosemary and roasted truffle garlic. Nadine and I both had that dish and agreed that the rosemary really set it apart from what we have traditionally tasted with mussels. 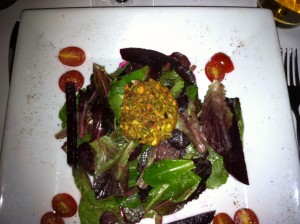 Kevin opted for the Beet Salad with a little pistachio crusted goat cheese medallion. He reported that was “quite delicious!” 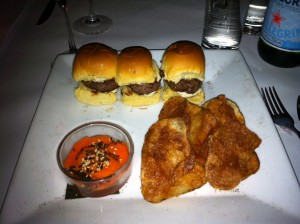 On to our second course: my Lamb Sliders were a hit with us all. The tasty little slider was topped with a yummy garlic aioli and served on a soft potato roll. I really liked the homemade potato chips, but think the dish could have done without the carrots on the side. They were not quite cooked enough and the vinaigrette really didn’t work for me on the whole. 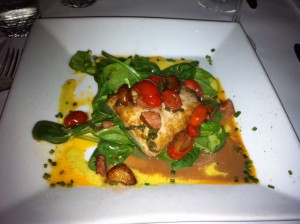 Larry’s Mahi Mahi was cooked beautifully with an interesting sauté of spinach and chorizo, and topped with a citrus-curry vinaigrette. I managed to get a tiny bite from him before it disappeared!

Kevin loved his Short Ribs with a Parmesan Red Potato gratin. The meat was fork tender and combined with the potatoes was as Kevin remarked, “brilliant in its simplicity.” 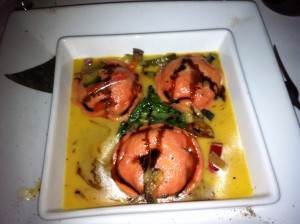 Nadine opted for the pasta, a ravioli filled with a puree of goat cheese, mushroom and sweet onion. The beautifully colored raviolis were resting in a yellow pepper coulis. 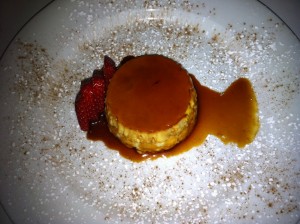 Three desserts were offered on the menu, so Nadine and I both chose the Crème Caramel. It was just lovely. The custard, with an intense vanilla flavor, was resting in a delicious caramel sauce. 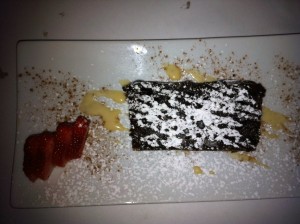 The Chocolate Cake was pretty straight forward and simple, but full of flavor. 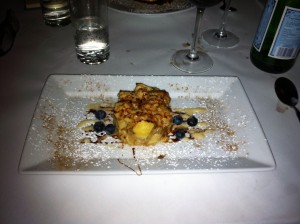 The other dessert offering was a tasty Bread Pudding with a vanilla-caramel drizzle.

This little gem is worth the trek off of the typical Greenwich Ave restaurant scene. The regular menu has some great options and we all noted that the wine list and bottled beer selections were quite eclectic. Perfectly matched to their menu. 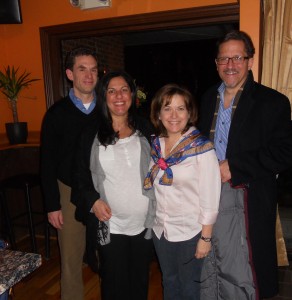 We’ll definitely be back!

The web site for Crew is here: crew280.com