People are reading
You are at:Home»Restaurants»Eduardo’s in Mount Kisco: Hudson Valley Restaurant Week 2011

I’m still reeling from the whole experience of restaurant week, too much too soon, way too much to EVER absorb!

Eduardo’s was a SERIOUS conflict. After the extreme fantasy experience of River City Grille, it was like going backwards in time. It looked like Sunday dinner, 1957, lots of families, lots of kids. It was still early, around 6 p.m., so it FELT like 1957 just before the Walt Disney Show came on — or was it Davey Crockett?… Yikes, time-warp city.. was I even alive then? Maybe I was just seeing a rerun of a Chevrolet commerical on Ed Sullivan before the Beatles came on, because we walked in past a Chevy VOLT sitting outside, like a door prize, First Volt we’d ever seen, have they even been released?  It was so… Jetson’s!

Inside, the middle aged men in plaid flannel shirts eating heartily, are they Italian immigrant arugula farmers having sunday pasta or hedge fund managers dressing down for a carbfest to fuel a hard night of college basketball watching? So hard to tell around Mt. Kisco.

So many pop cultural references, so many images involved with simply going out to eat! Eduardo’s seems perhaps a bit out of time,  a bit retro, big old fashioned, bar, not a lot of decor, people speaking Italian…Three or four generations at table… all slightly out of phase, but what was NOT at question was the food. It was GOOD. Maybe food was BIGGER in 1957?

The intrepid spouse, now totally burned out by the Liz Johnson food experience, and a friend, Amy, who used to make cheesecake for Eduardo’s 20 years ago, were overwhelmed by the choices.

Eduardo’s Restaurant Week Menu features 5 appetizers, 6 entrees and 5 different desserts. I say “features” in the present tense, because the owner has extended the menu for at least two more months, and has had such fun with it, may keep it going all summer at the same price.

The Cannelloni, a total home run.. a ton of moist chicken breast floating on a freshly made crepe. 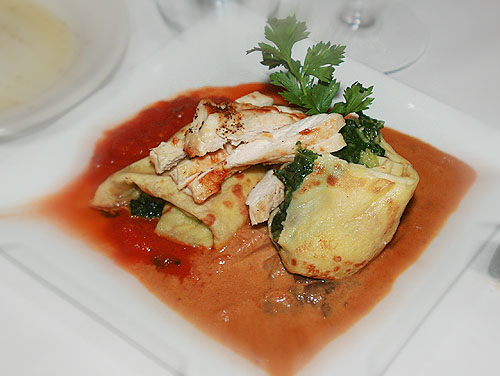 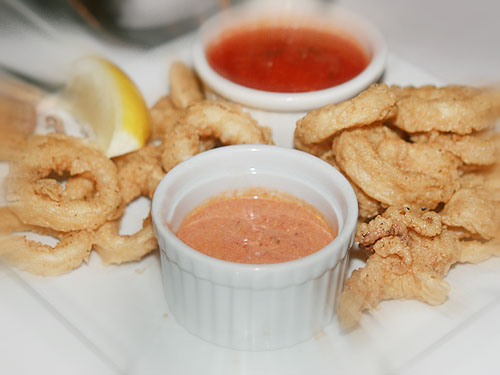 — always a good restaurant test, was a bit dry, but the generous saucing saved it nicely.

The mysteriously named Crab Roasted Pepper Agnolotti, an entree, had large, delicately hand made ravioli beneath what must have been the Mark McGwire twins of Tiger prawns, two of the largest  shrimp I’ve ever seen on a restaurant plate: 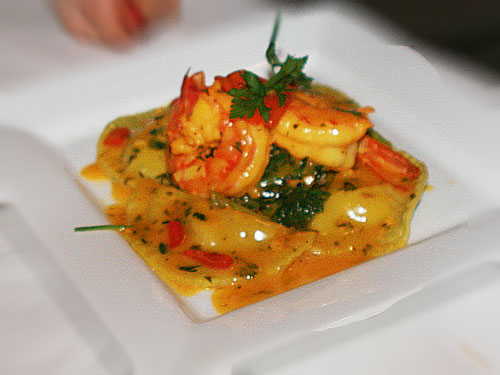 The Bass Ale Braised Short Ribs had apparently been slowly steaming for as long as Ireland’s been snake free, the meat literally falling off the bones in happy cascades: 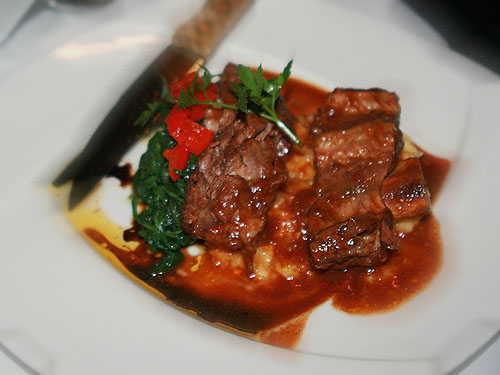 The Sweet Potato Gnocchi Bolognese were feather light, the sauce with crystal clear flavors, but the lightness of the gnocchi was defeated by the sheer size of the serving, there were a TON of gnocchi..totally satisfying! 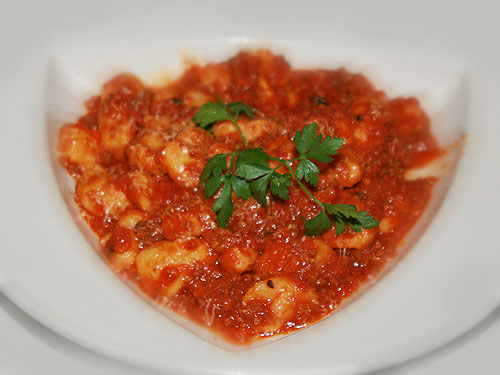 On a minor point, I thought the dinner rolls were a bit hard and asked if Eduardo’s had any other bread. Softer, I’m old, sorry… 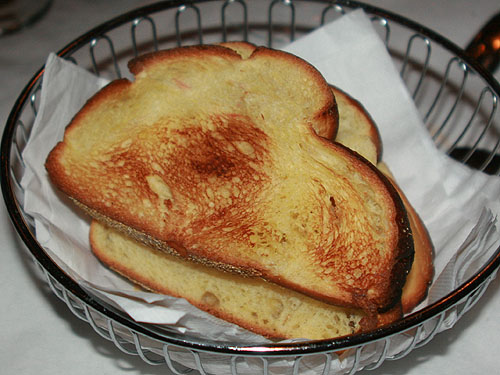 Toasted Challah. Not on the menu, but YIKES, it was great!

Graciously, the waitstaff brought out a basket of yummy toasted Challah, which was a brand NEW cultural mashup. 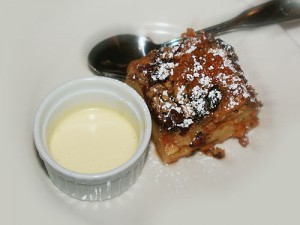 A bit later, for dessert, I got the Challah Bread Chocolate Pudding which seemed a little small, but maybe the basket of toast had to come from somewhere? 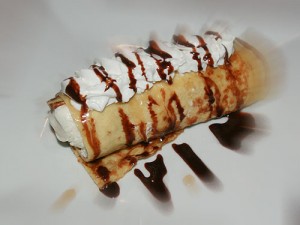 An Ice Cream Crepe was a delicate home run, and the Sampler was a good choice, with a great little slice of cheesecake and a cannoli.

The final touch,the last gasp of a messy table? 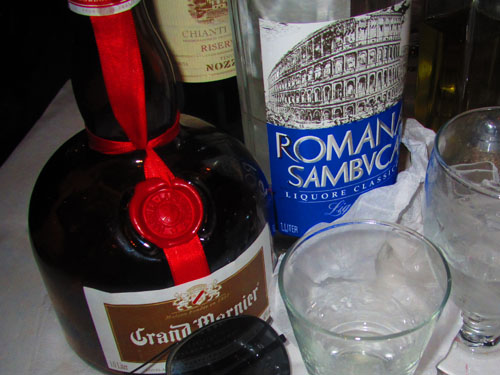 Nope, instead of merely dropping shots of sambucca at our table for after dessert coffee, the owner left a bottle of Sambuca AND a bottle of Gran Marnier, with unnecessary instructions to enjoy ourselves.

Winewise, he had also done us a solid by delivering a killer bottle of $60 Nozzolle Chianti when he discovered the $30 budget-conscious bottle of Montepulciano we had “wanted” had disappeared from the list earlier in the evening.

Hey, we’re going back, because there are still a BUNCH of dishes we didn’t get to try! Who knows, maybe they’ll have an Edsel or a DeLorian in the parking lot next time!