People are reading
You are at:Home»Restaurants»Equus at the Castle on the Hudson in Tarrytown: Hudson Valley Restaurant Week 2011

Hi!  Kristen Tregar here, back for a second review.  I’d like to think of it as part two in a series called “A Tale of Two Restaurants in Hotels”.  This time, my husband and I headed to Equus, located at the Castle on the Hudson, also in Tarrytown.  Once again, we were dining on a weeknight.

Equus can proudly boast of its impressive location.  The restaurant is in a veritable castle, located atop a relatively steep hill.  This affords an impressive view of the Castle’s tower on the way up the driveway.  Valet parking was available (more on this later), so we left our vehicle with the valets and headed in.  Equus is clearly separated from the hotel: its entrance is to the left, while the hotel desk is to the right upon entering the door.  We were greeted immediately, asked for our valet stub, then led to a quiet sitting room to wait for our table.  After perhaps 5 minutes, we were led through several rooms to our table.  The room in which we were seated was comfortably lit, bright enough to easily read the menus but not glaring.  The hostess drew our attention to the Restaurant Week menus, but let us know we were also welcome to order a la carte items if we chose to do so. 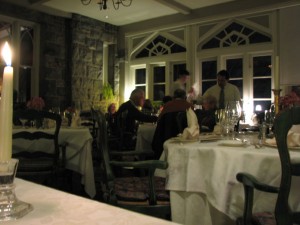 Our waiter arrived shortly thereafter, and drew our attention to the bottom of the Restaurant Week menu, where suggested wine pairings for the appetizers and main courses were listed.  While our server (Michael) was on his way over, my husband remarked that he was considering the oxtail over polenta as his entree.  Michael politely let us know that he had heard several other patrons remark that the oxtail was perhaps a bit salty for their tastes, and he wanted to let us know.  I was impressed by his attentiveness to our conversation as well as the care given to make sure we were satisfied with our selections.  Additionally, when we made our selections from the menu, I asked for his opinion on the offered wine pairings, and found his suggestions to be both thoughtful and accurate.  On another note regarding the wine pairings, I was impressed with the generous pours afforded with both courses.  Furthermore, the pacing of the meal was such that there was ample time to enjoy such a generous pour without having to gulp down the first glass to make way for the next.

While we made our final selections from the menu, warm rolls were brought to the table and individually served.  In my last review, I talked a little about bread and crust quality– these rolls were decidedly of the crusty-crunchy variety.  The other thing we noticed while perusing the menu was the small print at the bottom, noting that a 20% tip would automatically be added to our bill.  While not a problem for us, it’s definitely a piece of information worth having before you get there.

For my first course, I selected the potato onion soup.  The bright freshness of the onions and their greens complemented the velvety smoothness of the potato, and the overall texture was further enhanced by slices of fingerling potato nestled beneath the onion.  The soup brought out unexpected floral notes in the glass of pinot grigio I selected. 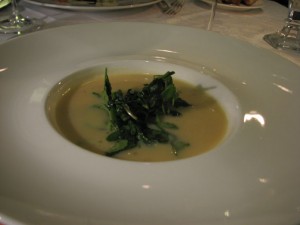 My husband selected for his first course a salad of field greens with sliced apple, goat cheese, and crisped parsnips.  The greens included were an interesting mix, offering a variety of flavors and textures.  The parsnips added a pleasant crunch, while the goat cheese afforded a light, tangy creaminess.  A light well-balanced dressing rounded out the dish. 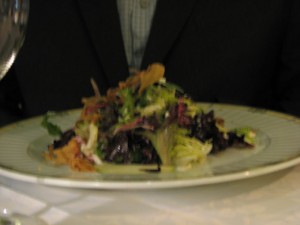 Next came the entrees.  Being a fan of salt, my husband decided to take a chance on the oxtail over polenta and found it to be perfectly cooked and not at all too salty for his taste.  The polenta was creamy and its sweetness complemented the earthy meatiness of the oxtail, which was tender but not overly so. 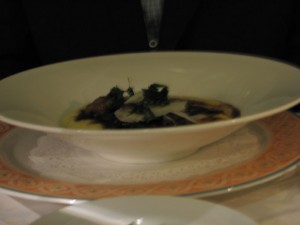 I selected the berkshire pork tenderloin over risotto with spiced kumquats.  Again, I was impressed that I was asked how I wanted the pork to be cooked (I asked and got medium rare).  The pork’s exterior was well-seared and lent a smoky flavor to the entire piece.  The overall texture was excellent- smooth with just the right amount of resistance to the knife.  The kumquats were an unusual and creative addition to the dish, bringing a citrus sweetness to the dish without the acidity one might expect.  The risotto was perfectly cooked, and complemented the rest of the dish beautifully.  For this course, I selected a glass of the 2009 Belleruche Cotes du Rhone.  It enhanced the savory flavors in the dish without being overly robust, tannic, or aggressive. 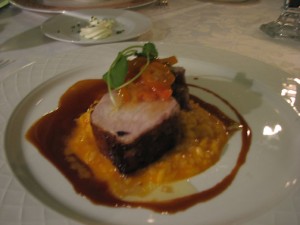 Throughout the meal, our water glasses were kept full and the servers and staff were attentive without hovering or making us feel rushed.  Following our entrees but before the desserts were served, the manager stopped by our table to make sure we were content with how the meal was going before continuing his rounds, checking in with other diners.  We really got a sense that the people at Equus go out of their way to make each party feel like important guests.

With our desserts, we ordered a cappuccino (me) and a double espresso (my husband).  The cappuccino didn’t disappoint- it was frothy and sweet enough not to require the addition of further sugar.  The double espresso was a touch on the mild side but tasty and not at all bitter. 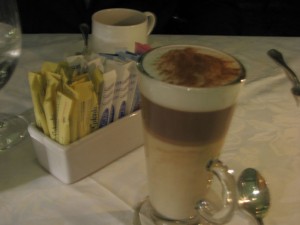 There was some brief confusion over whether or not we had received our desserts yet, but it was quickly cleared up.  My banana bread pudding arrived warm, and was firm and rich (but not overly so).  Accompanied by caramelized bananas, fresh berries, and a light vanilla crema, it was a perfect ending on a chilly evening. 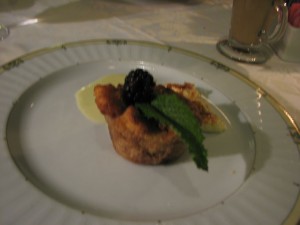 My husband selected a dessert of lemon curd, sandwiched between fresh, light, crispy cookies.  It was airy and refreshing- exactly what he was looking for. 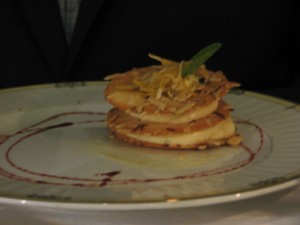 Once finished, our check was promptly brought when requested.  We were surprised to see a $5 charge added to the bill for the valet parking, as there were no obvious signs suggesting such a fee on the way in, nor any obvious lots in which one could park without having to pay for parking.  While not exorbitantly expensive, it would have been nice to have been made aware that such a charge was coming before it happened or alternatively, to have been given an option to avoid it, should we have wished to.  The parking surprise added a small unnecessary blemish to what was otherwise an excellent experience.

Overall, Equus was an exceptional experience, and I would highly recommend it, particularly for special occasions or any time you really just want to feel well-cared-for and well-fed.