People are reading
You are at:Home»Restaurants»Cena 2000 in Newburgh: Hudson Valley Restaurant Week 2011

Hi. Gina Truhe here. My first foray into HVRW 2011 was at Cena 2000 in Newburgh.  My frequent dining partners, Cousin Dan and his girlfriend Meghann (along with her her 5 year old, Aidan) joined me.

Cena 2000 is located on Newburgh’s waterfront in a long row of restaurants and bars. I knew that parking could be difficult there on weekends, but even on that rainy Wednesday night parking was difficult. Cousin Dan dropped us off at the door while he looked for parking, Meghann, Aidan and I walked in to the nearly empty restaurant at about 6:45. The waiter who met us at the door graciously hung our coats and then led us out to the glassed in, water-front dining room. There were two other diners in the restaurant. As soon as we got to the table, Aidan looked around and proclaimed “This place is beautiful, just like the restaurant in Club Penguin” (his computer game… ahh to be 5).

The wait staff was friendly a courteous and quickly asked us for our drink orders – Pinot Grigio for Meghann, Pinot Noir for me, 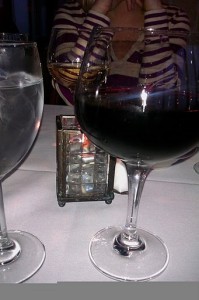 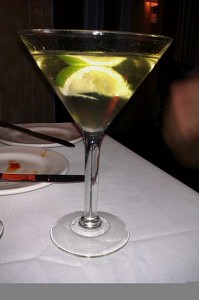 and Aidan went all out with a glass of milk! 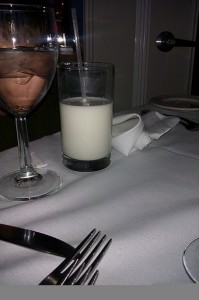 The three adults all ordered off of the HVRW menu and we all chose the same appetizer, Melanzane Ripieni, eggplant stuffed with riccota and Parmesan and topped with tomato sauce. 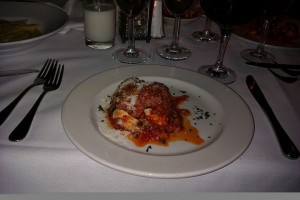 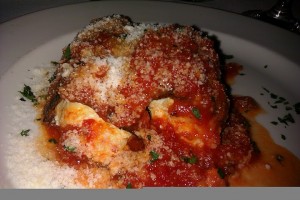 Interestingly, we all had the same thing to say about it: it’s good, but not great. I happen to be a ricotta nut – but there was just too much in it. Unfortunately, you lost a little of the eggplant taste because of it.

Aidan decided to veer off of the menu and went bananas with an order of penne with butter. Though it wasn’t the kind of dinner that would make me sing – he was awfully happy with it!

Meghann and I decided upon the same entree, Penne ala Vitella e Salvia, Penne with ground veal, sage and white wine. A few bites in and our eyes met across the table. I knew what she was thinking, and she knew what I was thinking: eeh. It was ehh. Not good, not bad. I suppose I was just disappointed that the veal wasn’t more flavorful. I wanted a big punch of sage, but I didn’t find it. That being said, the Penne was cooked nicely – al dente. The lack of a real sauce (the Penne and veal mixture seemed to have been cooked totally separately, only to meet as they were touching the plate) just let me down. 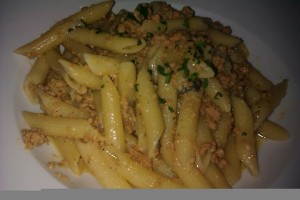 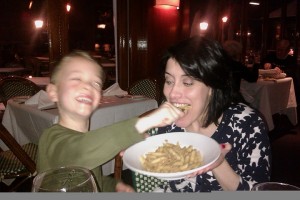 Cousin Dan went with the Salmone alla Griglia, gilled salmon with avocado, tomato, onion and rice. He was fairly pleased with his meal. But after the heavy-ish eggplant he didn’t eat all of the salmon. 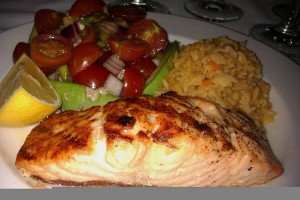 When it was time for dessert we were really surprised when the waiter brought us the full dessert menu – we were not limited to the HVRW choices. We definitely took advantage of it too! Meghann order the Apple Strudel – which she enjoyed (though frankly I think Cousin Dan ate half of it, after which he said “eh, it was ok. A little heavy on the cinnamon, I like apples. Yeah, it was bangin.”) 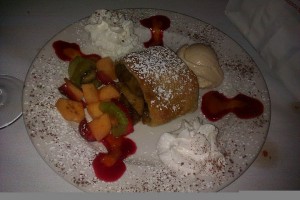 I had the Semi Freddo filled with chopped hazelnuts and drizzled with a dark chocolate sauce. I would have enjoyed the semi freddo if it had had a bigger punch of flavor – vanilla bean perhaps, it was a little bland, though the hazelnuts did help to add flavor. 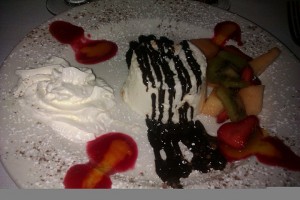 Cousin Dan let Aidan have his dessert, so Aidan chose the chocolate cake with layers upon layers of cake mousse. He declared that it was the “best chocolate cake ever”. 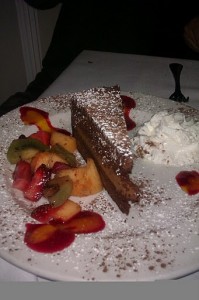 At one point he even turned to Meghann and said “Cake me” indicating that he’d like her to feed him a bite – he couldn’t have been happier! 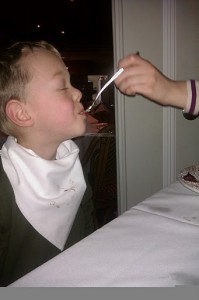 So, while we weren’t blown away by the food I do have to say that the service was excellent. In the summer I’d gladly go there for some cocktails outside on the water. But, to me that’s the great thing about HVRW – if it isn’t the most mind-blowing meal you’ve every had, it was only $28, and at the very least, you get a great night out with friends!