People are reading
You are at:Home»Restaurants»Harper’s in Dobbs Ferry: Hudson Valley Restaurant Week 2011

Donna Monaco Olsen and Bradley Olsen here to tell you about Harper’s in Dobbs Ferry.  What a fantastic surprise!  We were expecting bar food like burgers and the like, but were pleasantly surprised by wonderfully composed dishes.  Chef Chris Vergara is a genius at the combination of ingredients in many of the plates we tried.  We wish we had brought more diners as they were one of the few establishments to have more than three offerings per course (seven for the appetizer and eleven for the entree course).

It was a snowy evening and the joint was jumping with many tables full.  The proprietor Justin Montgomery was greeting patrons and directing the show. This restaurant has only been open for three months and has already had the thumbs up from all who have tried it.

The atmosphere is interesting in many aspects.  Upon our arrival we were seated in the front room which was a little brighter than the rest of the spaces, although still dimly lit.  The tables are made from reclaimed barn wood and are inlaid with pictures from Scotch wood cases.  Remnant ends were cut into “slices” and laid like bricks to make up a beautiful wall located across from the restrooms on the way to the outdoor dining area. 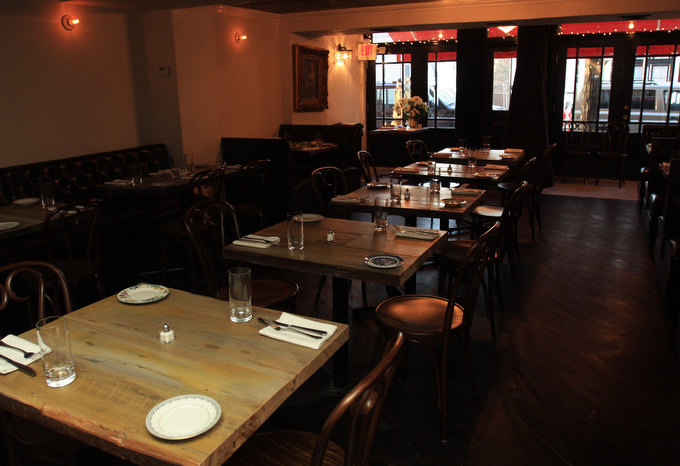 Gotham Design, where Bradley works, designed the space for this restaurant in its previous incarnation, Mimosa, including the patio space that will be open soon, if Spring ever arrives.  We look forward to summer dinners on the patio after the jazz concerts in the waterfront park on Wednesdays.  Coincidentally there is jazz music playing throughout and a large bar and bartender ready for action.   They have changed all the decor with some very interesting textures on the walls. 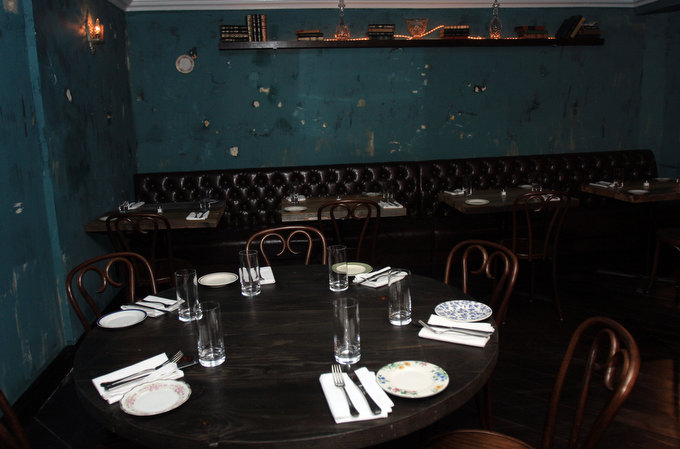 The feel is rustic and we loved the mismatched butter plates like you would get at grandma’s house at a Sunday dinner.  There is a history to the name Harper’s — she was Chef Chris Vergara’s great aunt Rose and an entrepreneurial woman for her time.  On the menu are little tidbits of her antics such as she “…claimed she drank at least two glasses of Scotch every day from age 19 to 98 – excluding the prohibition era, insisting she’d consumed 3 glasses a day out of principle.”  This makes for some fun reading while choosing your meal.

If you are lucky enough you will get our waiter, Abraham, He was informative and helped us along the way.  He informed us that they did not have  a regular menu that evening but could accommodate if we wanted to order al a carte from the HVRW menu.  The food did not disappoint and lived up to the accolades seen recently for this chef who is the “new guy in town” . He is the owner and chef at Meritage in Scarsdale as well.  Chris and David DiBari from The Cookery were viewed having fun with each other on the live chat with Liz Johnson last week.  They seem to be good friends and share ingredients when needed.

We ordered three different appetizers.   Steamed mussels-garlic in a white wine sauce were served with no surprises but they were tender and delicious. 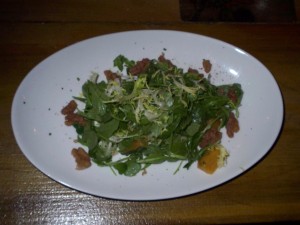 We sampled the Roasted Beet Salad-arugula, walnuts, Greek yogurt as we have come to love beets especially the golden variety.  Happily that was the type served this evening.  Although we dined on this very same salad many times over these past two weeks this was by far the best rendition.  It really had the right mix of flavors and the “smear” of yogurt just the right tang. 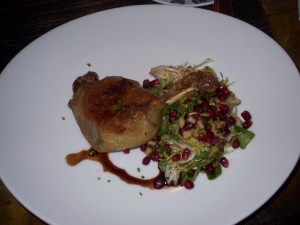 One of the more interesting appetizers tried was the Crispy Duck Leg-frisee, pomegranate, and apple.  They were not kidding about the crispy part, crunchy outside and a tender meat inside and it included the thigh, making it a nice portion for an appetizer.  The pomegranate seeds were the pucker needed against the saltiness of the skin. 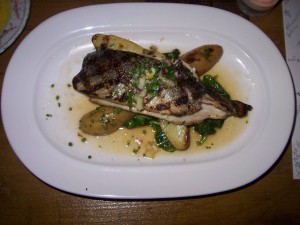 We were thrilled to have to struggle to “decide” upon an entree as there were so many great sounding choices.  Grilled Rainbow Trout-spinach, fingerling potatoes, preserved lemon in a vinaigrette was the decision made among five fish choices.  Being nervous to order trout as it is often dry and overcooked, we found ourselves singing its praises and thrilled to enjoy the most wonderfully moist tasting whole de-boned fish.  The flavors were really brought together by the lemons and red onions, which sometimes can be overpowering to a delicate fish.  The accompaniments of fingerlings and spinach were accentuated by the lemon flavor. 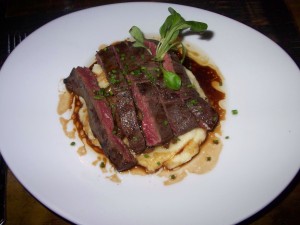 Another departure from our typical selections was the Grilled Skirt Steak-caramelized onions, mushrooms and potato puree.  It was cooked to perfection, and served exactly as ordered.  It was very nicely presented with the steak sliced but not too thin and served atop the onion and potato.  A very tasty and satisfying dish. 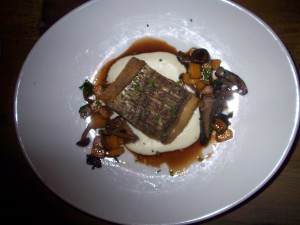 The other fish ordered was the Wild Striped Bass-cauliflower puree, roasted mushrooms, and butternut squash.  A lovely portion of crisp fish surrounded by mushrooms and cubed roasted squash in the puree.  Delicious in texture you could taste each and every element. 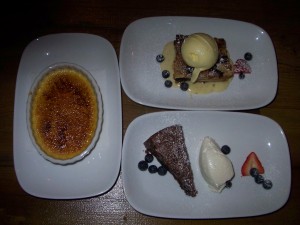 All three offerings of dessert presented themselves to be very good but not the highlight of the meal as the other two courses were really special.  The Chocolate Bread Pudding-vanilla ice cream was served with a vanilla anglaise sauce had chocolate chips in it and was warm.  The Chocolate Torte-whipped cream was very “brownie-like” and not dense and rich as it would have been expected from the descriptive word ”torte”, but also served warm and enjoyed.  The Creme Brulee was crisp on the top as a good one should be but the filling was more the consistency of mayonnaise then a well made custard.  Still a very nice vanilla flavor and the black dots of the vanilla beans were evident in the dish.  The burnt sugar reminded us of marshmallows roasted.

This restaurant was a pleasant surprise and enjoyed tremendously by all.  We look forward to Wednesday’s summer jazz on the river and seeing what this terrific chef has in store for us next!

The 411 on Harper’s is coming. til then: Harper’s Opens in Dobbs Ferry.