People are reading
You are at:Home»Restaurants»Birdsall House in Peekskill: Hudson Valley Restaurant Week 2011

Hey there, Juliana Taube here, excited to share my experience at Birdsall House. I had been with a friend once before, and the food was outstanding with a beer selection to beat! I wanted to take my foodie parents, and my cousin, David Kanter, executive chef at Sweet Grass Grill, to this awesome gastropub. 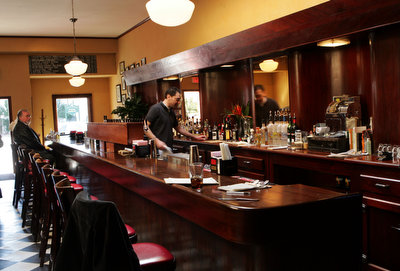 When we arrived, the restaurant was about half full, there was no host, but someone came over pretty quickly after our arrival. The restaurant is VERY dark, so be prepared to squint at the menu. They play old movies on the long wall in the dining room, which is a really funky twist. The restaurant was a bit too dark for me to take pictures of the bar, but it is a beautiful dark wood bar: an authentic place to come enjoy a beer. Ashely was our waitress and explained Birdsall House is a farm-to-table restaurant with 20 beers on tap, constantly rotating. I ordered Docs Hard Cider, my cousin had the Captain Lawrence Rye Beer, and my parents split the Smuttynose Porter.

There were three choices for each course. For the first course; Butternut Squash Soup, Lentil and Chickpea Salad, or Sausage and Cheese. My cousin and I got the Chickpea and Lentil salad which came served in a radicchio leaf, with french green lentils, wheat and spelt berries, parsley, button mushrooms in a Meyer Lemon vinaigrette. 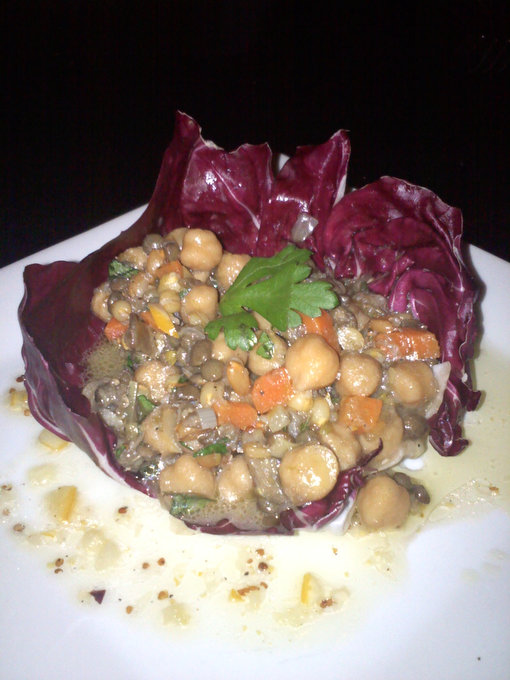 The presentation was wonderful and the flavors were fantastic! I am a huge grains fan, and love to see when restaurants use grains well. I didn’t see this on their regular menu, but recommend it be added!

My dad ordered the sausage and cheese which was house made pork and fennel sausage, Adirondack wax cheddar, porter and caraway mustard, and mesculun salad. 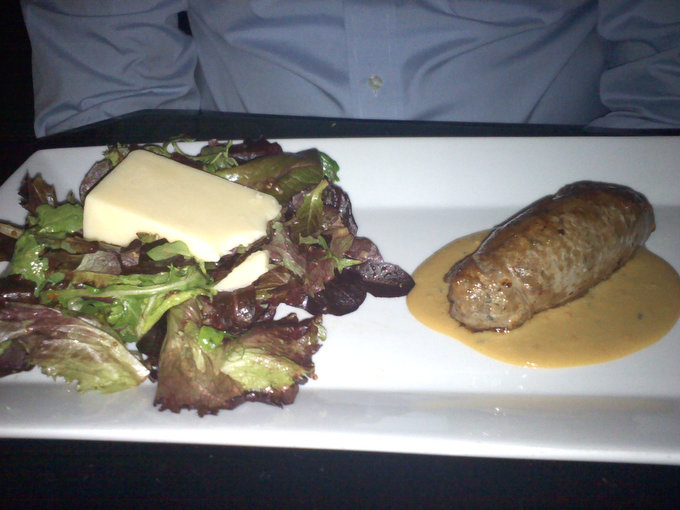 My only criticism was that there was only one sausage! It was cooked wonderfully, and kudos to Birdsall house on making their sausages in house! There was some sauce from both appetizers left over and when we asked for bread to dip it in, they informed us they did not have any. It would have been really nice to pair some crusty multi-grain bread with these dishes to sop up the yummy goodness left over.

For the main course the options were: goat cheese en croute, braised pork belly, and jerk spiced shrimp skewers. My cousin got the Goat Cheese En croute; goat cheese, butternut squash, portobello mushroom and spinach baked in puff pastry with mesculun salad and Dijon cream. I enjoyed the braised pork belly with portobello mushroom broth, soft-poached egg, creme fraiche, and scallions. My dad got the jerk-spiced shrimp skewers; with collard greens, curried okra and tomato, habanero hot sauce. My mom did not get the restaurant week menu, instead ordering lentil cakes with a sausage patty on top. 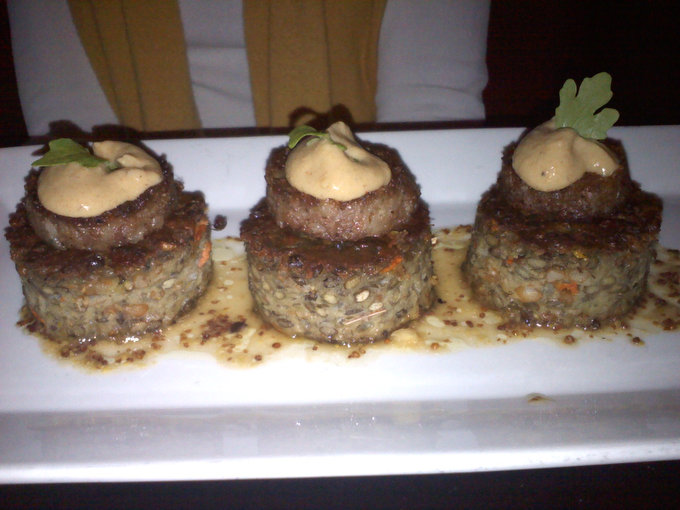 The lentil cakes were good, but there was not much acidity to the plate which left something to be desired in the dish. The pork belly was a bit chewy and the mushrooms too salty, but it came on a bed of Wild Hive polenta, which was fluffy but still had great texture. The soft-poached egg also gave the dish another nice level of flavor. It came in a big bowl, which was a really lovely, homey touch for me. My dad loved his shrimp, although he thought there was a bit too much heat as the shrimp were already in jerk seasoning and then they added habenero hot sauce. I

thought my cousin’s goat cheese en croute was the winner as it wasn’t anything like I expected. When I read puff pastry, I imagined a very doughy dish, where the vegetables took a back seat. Instead though, the “puff pastry” was just a thin layer of crust to cover the overflowing, flavorful butternut squash, spinach, mushrooms, and goat cheese. The dish was a real winner and a very creative vegetarian addition to the menu. 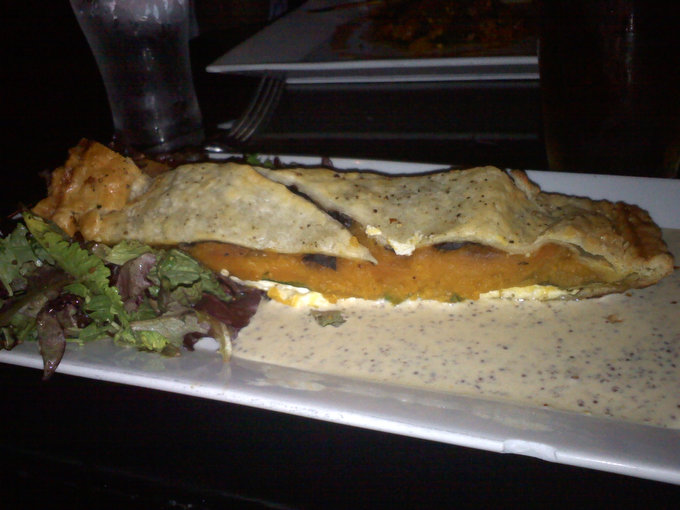 For dessert we shared the gran marnier and almond bundt cake; buttermilk ice cream, almond brittle and orange marmalade and the apple bourbon bread pudding; nutmeg whipped cream, toasted pecans. The desserts were disappointing to say the least, but I suspect most people don’t come to Birdsall for the desserts. 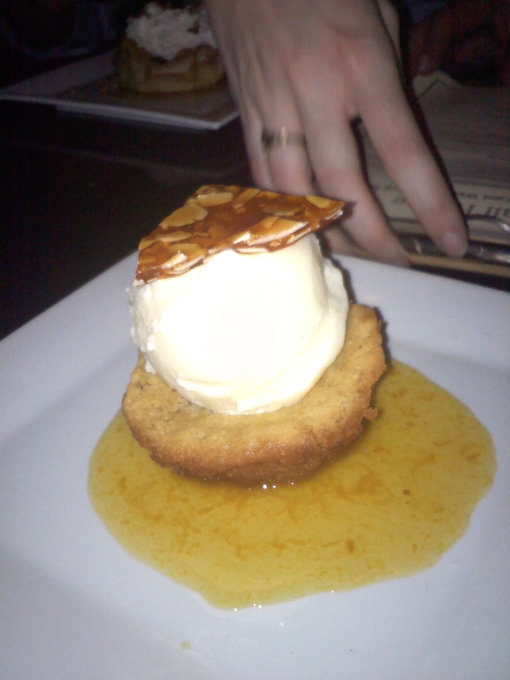 The apps and entrees did not disappoint the second time and I will definitely be back! I don’t know that many restaurants in Westchester making their own sausage and smoking their own meats and doing it really well. While Birdsall House does source locally, it would have been nice if some of the farms where they source their product from were listed on the menu. As my family said, Birdsall House is a great spot for getting together with friends, eating local food that’s satisfying, and feeling good about supporting a restaurant that supports local farmers. Can’t wait to go back and try the ‘Bridsall Reuben!’