People are reading
You are at:Home»Restaurants»Peter X. Kelly and Doug Nguyen Collaborate on a Two-Part Dinner Series: “The Raw and The Cooked”

When Doug Nguyen opened his first restaurant in Rockland, Wasabi in Nyack, back in 2003, chef Peter X. Kelly threw him a coming-out party: he invited Nguyen to help cook a nine-course dinner at Kelly’s Restaurant X in Congers, introducing Rocklanders to Nguyen’s creative style of Asian fusion cooking. 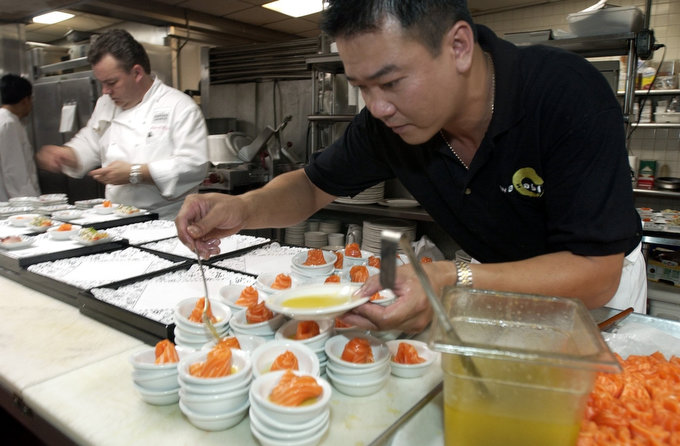 Kelly, left, and Nguyen, right, cook together at Restaurant X in Congers in 2003. JN file photo.

Well by now, everyone (around here at least!) is quite familiar with both chefs, thank you very much. So with 8 years past since that first dinner, anticipation for a second one should be building, right? The wait is over, folks.

Both chefs will cook both evenings, alternating courses. The dinners, which are limited to 60 guests, begin at 7 p.m. and cost $125 each and include all food and beverages.

The menus, after the jump.

The Raw and The Cooked
A Presentation of Raw Foods

A Tasting of Wasabi Desserts

The Raw and the Cooked
A Presentation of Cooked Foods

A Tasting of Xaviars Desserts