Linda Lombroso has a very entertaining and informative story in today’s food section about making feather-light matzo balls. The best tips seem to be to be sure to separate your eggs, but don’t beat the whites too much, and handle the matzo balls as little as possible. Here’s a look:

For 30 years, Jonathan Meyer’s cloud-shaped, lighter-than-air matzo balls have been the star attraction at his family’s Passover Seders.

The matzo balls, made with rendered chicken fat and beaten egg whites, practically float on the surface of the soup — a delightful outcome for a home cook like Meyer, who shivers at the thought of heavy, dense lumps that sit in the stomach like stones. But other cooks prefer a solid, stick-to-the-ribs matzo ball. 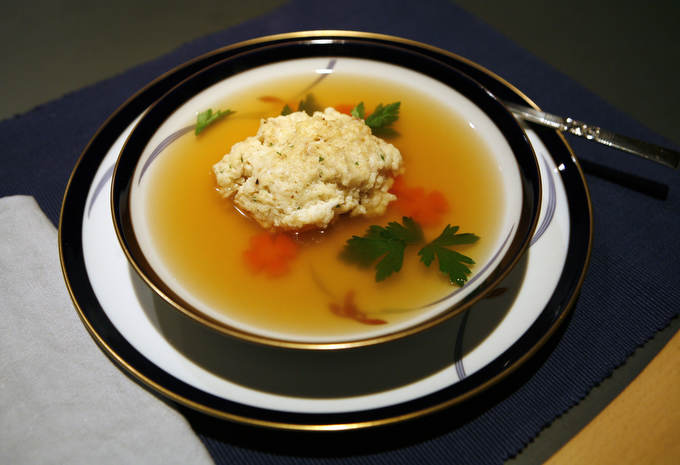 Meyer, who lives in Mount Vernon, is well aware of the debate that has occupied matzo-ball purists from time immemorial — and comes back into the spotlight Monday, when Passover begins at sundown.

The argument divides enthusiasts into two camps: those who prefer theirs feather-light and who like a heartier matzo ball.

Which is actually better?

It’s a question that has no clear answer, even when it comes to experts like Joan Nathan, author of “Jewish Cooking in America,” who has invited 40 people to her Washington, D.C., home for next week’s Seder.

“I don’t like them like lead, but I do like something you can bite into,’’ says Nathan, who grew up in Larchmont and whose mother, Pearl, edited the Larchmont Temple cookbook in 1950 with Gertrude Blue, mother of wine and food writer Anthony Dias Blue. Nathan’s favorite matzo balls, she says, are simply “al dente” — but not heavy like the ones made by Golda Meir, the former Israeli prime minister. “Like lead,’’ says Nathan, who tried the recipe when she was working on her cookbook “The Flavor of Jerusalem.”

Though Nathan has experimented with everything from seltzer to kosher-for-Passover baking powder — both of which may yield a fluffier matzo ball — she’s partial to the recipe featured in her new cookbook, “Quiches, Kugels, and Couscous: My Search for Jewish Cooking in France” (Knopf, $39.95), which includes rendered goose or chicken fat, powdered ginger and grated nutmeg. Nathan uses spoons to form the balls, then cooks them in boiling salted water and transfers them to chicken soup, where they absorb additional flavor. 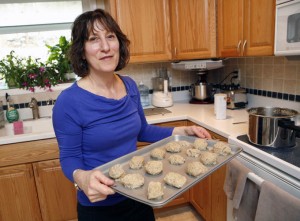 Technique is crucial when it comes to making good matzo balls, says Ruth Ossher, right, of South Salem, who’s been making hers for more than 25 years. All of hers are light, she says.

It’s very important to refrigerate the mixture so it’s cold, says Ossher — who covers hers with a towel in the fridge — and to use a pot that’s big enough to accommodate the matzo balls when they’re simmering. Ossher is also big on using wet hands when shaping the dough into balls — “moist, but not too moist” — so they can be formed more easily.

This year, Ossher is trying whole-wheat matzo meal for the first time, following the recipe on the back of the Streit’s box, but using grapeseed oil in place of ordinary vegetable oil and Celtic or Himalayan sea salt instead of table salt.

Ossher, who has already prepared and frozen more than 80 matzo balls, says the whole-wheat version seem a bit finicky, breaking apart more easily as they’re cooking. They smell good, however, which is always a good sign — but she won’t taste them until Monday night, when they’re floating in her soup. 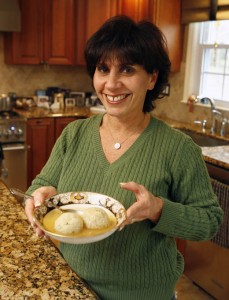 For Brenda Richter, left, who lives in New City, it’s all about the sensory experience of the matzo ball — and enticing guests with the smell and taste of her dishes. “It’s a staple in any Jewish home, so everybody has an idea of what a matzo ball should taste like or look like,’’ she says. “Mine get rave reviews.”

Richter, a self-taught chef who often does cooking demonstrations at the JCC Rockland, is a big fan of the feather-light matzo ball, particularly since it’s served toward the beginning of the Seder meal, which is generally quite filling. “It shouldn’t be crunchy and you shouldn’t have to chew it,’’ she says.

After years of tweaking her recipe, Richter has settled on a method that requires separating the eggs and beating the whites. She also oils her hands when forming the balls, working quickly with minimal handling. “Rolling too much makes them stiff and packs the balls, and sometimes you get a little piece inside that’s chewy,’’ she says.

Jonathan Meyer has never made a chewy matzo ball — though he almost produced a disastrous batch 30 years ago, when he was newly married and preparing his grandmother’s recipe for the first time. Fortunately, he discarded the mixture and started again, carefully folding the matzo meal into the beaten egg whites so they wouldn’t deflate and lose their fluffiness. Meyer and his wife, Beverly Segal, arrived late at the Seder, but the matzo balls were a success, he says.

The recipe, which Meyer has changed only once — 25 years ago, he added fresh parsley — consistently yields light, airy free-form matzo balls that are shaped like clouds. “And just like clouds, no two knaidlach are alike,’’ says Meyer, using the Yiddish word for matzo balls. 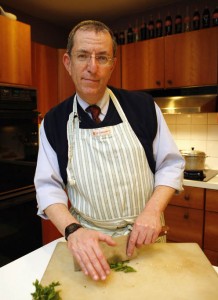 Why does he use two spoons to form the knaidlach instead of rolling the dough into traditional balls? “I don’t want to handle them any more than is necessary, because it’s all about the fluffy,’’ he says.

Although Meyer is responsible for the matzo balls served at his family’s Seder each year, his four daughters are learning how to make them — and yes, he is open to suggestions, provided they remain on his side of the fence.

“What I want them to do is improve on it. If they say, ‘This leaden knaidel is a better knaidel,’ I’ll send them out of the room,’’ he says with a laugh. “But if they can make it lighter and fluffier and more delicious, that’s great. That’s what we have kids for.” 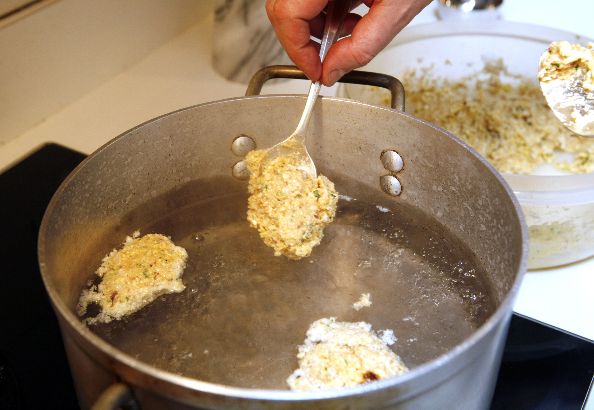 Jonathan Meyer’s grandmother Bessie Bender, who was born in 1879 and died in 1970, passed this recipe down. Meyer says you should not double or triple the recipe; instead, make as many separate batches as you need. 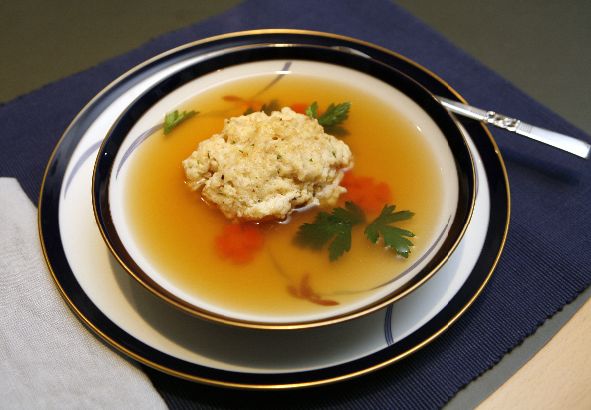 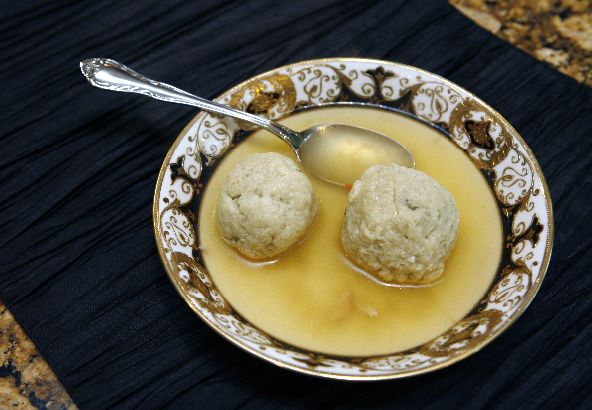 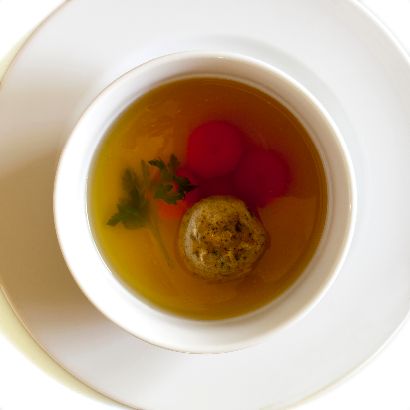 From “Quiches, Kugels and Couscous: My Search for Jewish Cooking in France” by Joan Nathan (Knopf, 2010)