People are reading
You are at:Home»Food Links We Love»When Pigs Fly in Yorktown

Last Thursday night, a 65 pound piggy from Hemlock Hill Farm met with the culinary talents of chefs Jonathan Pratt & Nick DiBona of Peter Pratt’s Inn.  The end result was an all out, pig pickin’, finger lickin’, La Caja China pig roast.   Patrice Costa here as guest blogger while Liz is on vacation, and if you’ve never heard of a La Caja China, be prepared to thank me for introducing you to this unique treat.

About 40 pork lovers had the opportunity to experience this pig roast feast which was organized by Culinary Collaboration.  At the beginning of the event, chef Jonathan Pratt explained that the La Caja China (translated “the Chinese box”) dates back to the 1850s when Chinese immigrant workers in Cuba toted this roasting box around to cook their meal as they toiled in the sugar cane fields.  In doing my own research, I found that there’s also a belief that the word “china” comes from a Hispanic word meaning exotic or mysterious.  Honestly, I think there’s something to that since what went on in this unassuming metal box was pure magic. 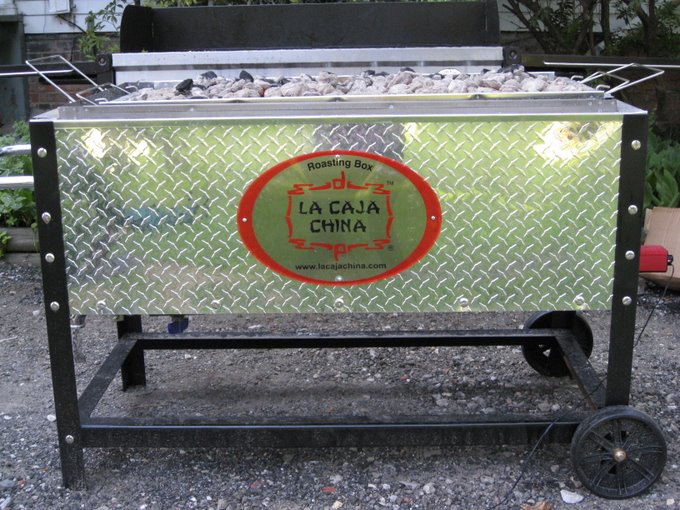 Before the guests arrived, the pig was butterflied and injected with mojo for moistness and flavor (see, doesn’t that sound magical?).  Jonathan’s recipe for mojo is a solution of soy, mirin, garlic and fresh orange and lemon juice.  Once the pig was secured on the rack, it was lowered, skin side down, into the roasting box.  The cover was placed on top and loaded with hot coals that were replenished intermittently during the 4 1/2 hour cooking process, thus keeping the inside of the La Caja China at a constant 350 degrees.  We got our first peek of the little fellow when it was time for Jonathan and Nick to flip the rack and score the skin (shallow cuts in a criss-cross pattern allowing the fat to render out and the skin to crisp). 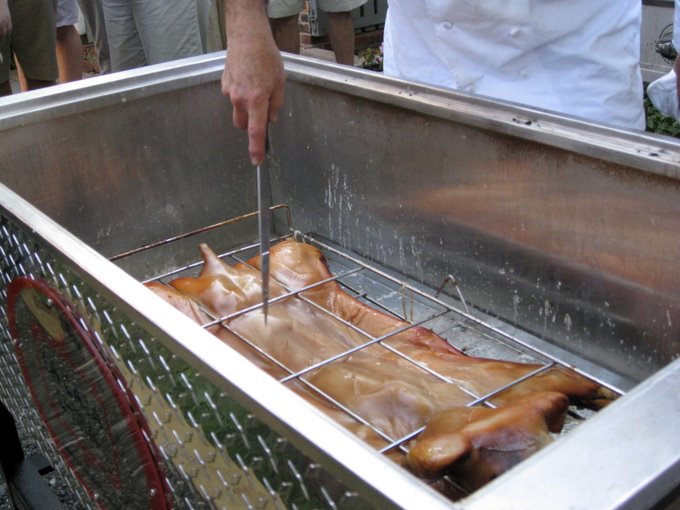 Back in the box for twenty minutes more and perfection was achieved:  ultimate crispiness on the outside and sweet tenderness on the inside.  Absolutely THE BEST pork I have ever tasted! 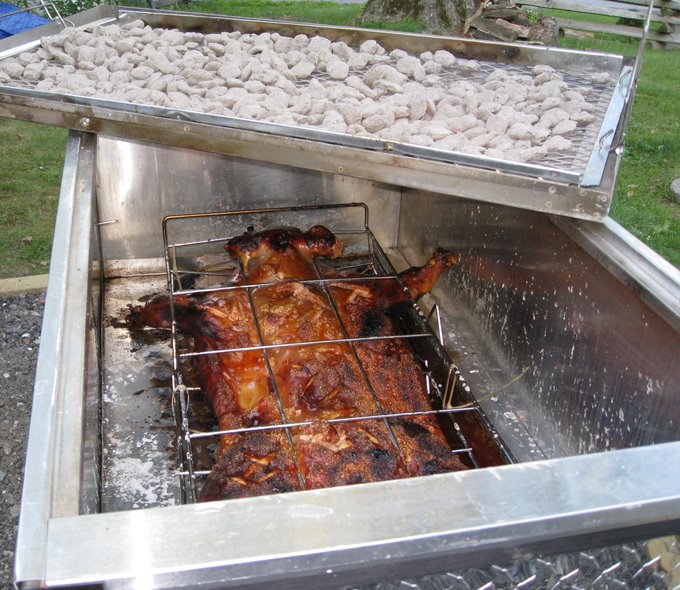 (Doesn’t it look like the piggy just flew in??)

While the pig was roasting, Jonathan had entertained all of us with his quick-witted culinary expertise as he demonstrated how to make the Grilled Corn and Feta Salad, Asian Coleslaw and Warm Potato Salad.  It was like Food TV up close and personal right in Yorktown. 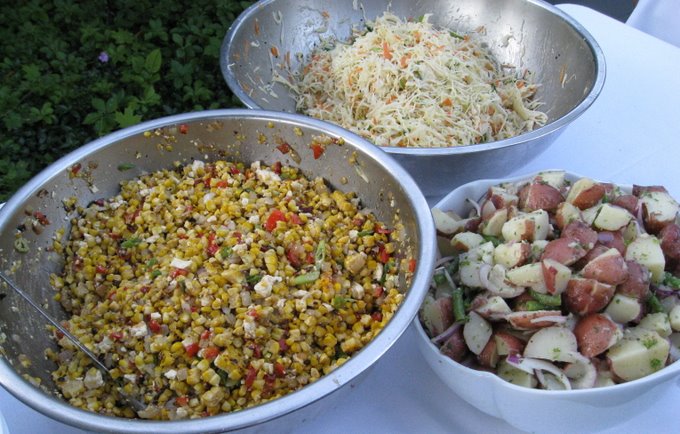 In addition, he expanded our foodie vocabulary with his very own word of the day:  crumbleate – which is the act of crumbling; as in “Don’t forget to crumbleate the feta cheese for the corn salad.”

For the beverages of choice, we had a very nice selection of New York State microbrews courtesy of Steve & Joe of Brooklyn’s Union Beer Distributors. 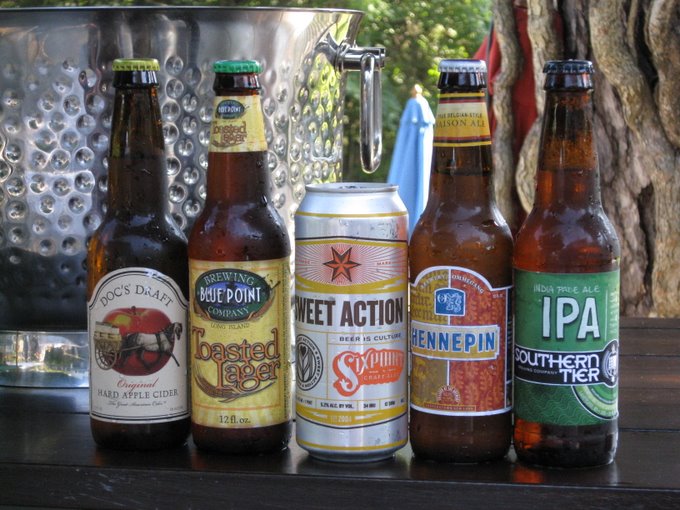 I’m more of a wine girl, but liked the Sweet Action cream ale by Sixpoint brewed in Brooklyn.  It was creamy, as expected, but had citrus notes that I thought paired well with the pork and sides.

Looking at all the tables scattered around the inn’s pretty outdoor patio, there were plenty of smiles and pleasant conversation as everyone savored their meal. 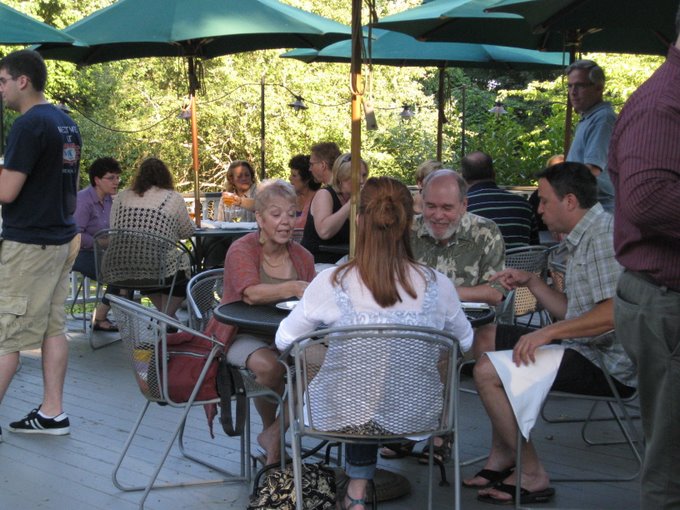 Janette and Nancy agreed that they definitely tasted the flavor of soy from the mojo in the succulent meat and went so far as to use one of Jonathan’s favorite words –“umami” (the fifth taste after sweet, sour, bitter, and salty). 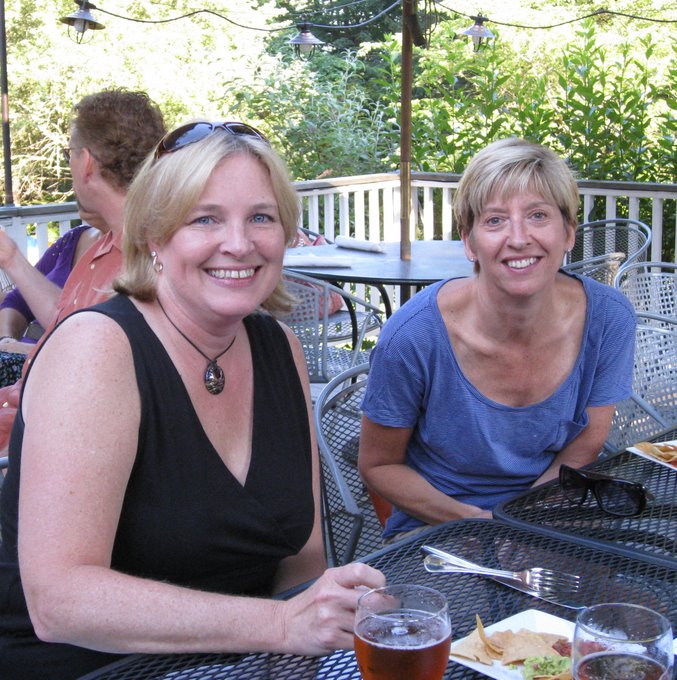 As for the sides, the corn and feta salad was my clear favorite.  It was an explosion of flavor, texture and color.  The vinaigrette was a perfect combination of honey (straight from Jonathan’s own hive) and lemon, which complimented the sweetness of the corn and tanginess of the feta cheese.  Visually, it was a vibrant mixture of yellow corn, red peppers and green scallions. 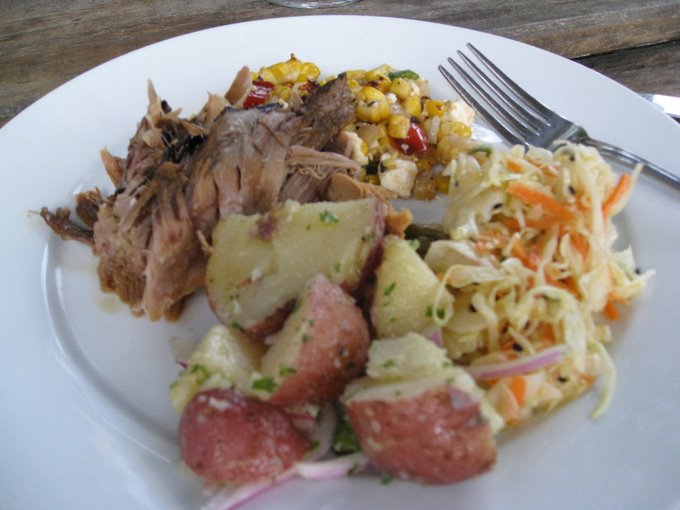 My plate before I devoured it; the corn salad is at the top. 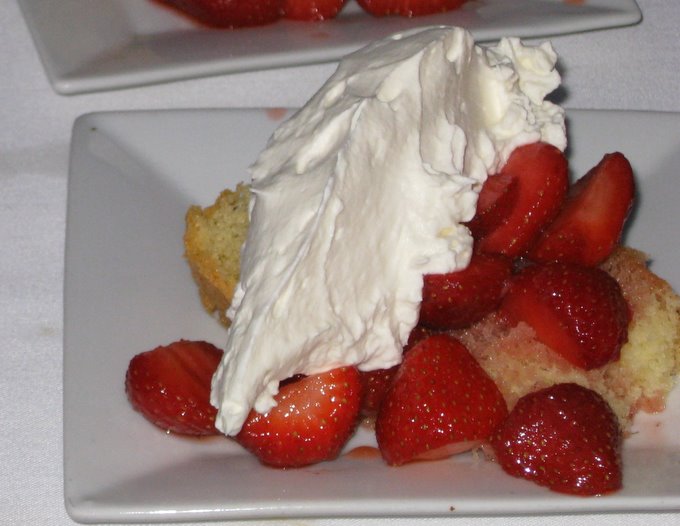 Thank you Jonathan and Nick for an amazing La Caja China pig roast!  It was piggylicious (that’s my foodie word of the day!).

The 411 on Peter Pratt’s Inn and other useful information:

Peter Pratt’s Inn is located at 673 Croton Heights Road in Yorktown and has a Family BBQ every Wednesday at 5:30 pm, rain or shine, indoors or out for $28 adults/$15 children.   Eclectic outdoor buffet including salads, grilled vegetables and pastas and plenty of grilled meats and fish. Each week is a different theme so call ahead if you are interested in the La Caja China pig roast.  Price includes all you can eat from the buffet and grill but does not include beverages or dessert.  Reservations are required (914-962-4090).

The Meadows Farm is located at 329 Underhill Avenue in Yorktown Heights and offers a selection of locally grown vegetables, produce and herbs.