People are reading
You are at:Home»Restaurants»Restaurants We Love: Tavern at the Highlands Country Club in Garrison, NY

Readers of the print edition of The Journal News already know: We’ve been running a restaurant column called Restaurants We Love on Sundays for several months now. Our features staff takes turns writing them, so you get a different perspective on the local scene each week. As part of my “I will blog more!” pledge, I’ll post those columns on Small Bites and our local blogs, too.

I’ll try to catch up with older ones as we go along, and I’ll start with the ones I’ve written. Here’s Tavern in Garrison, where I really, really loved my meal. New chef Jason Wood is doing some pretty creative things in his kitchen, influenced by the bounty of the Hudson Valley. He’s been into local cooking for quite some time now — he used to cook at Blue Ridge in Washington and at Savoy in SoHo, among other great places. The buttermilk-fried chicken is absolutely insane. 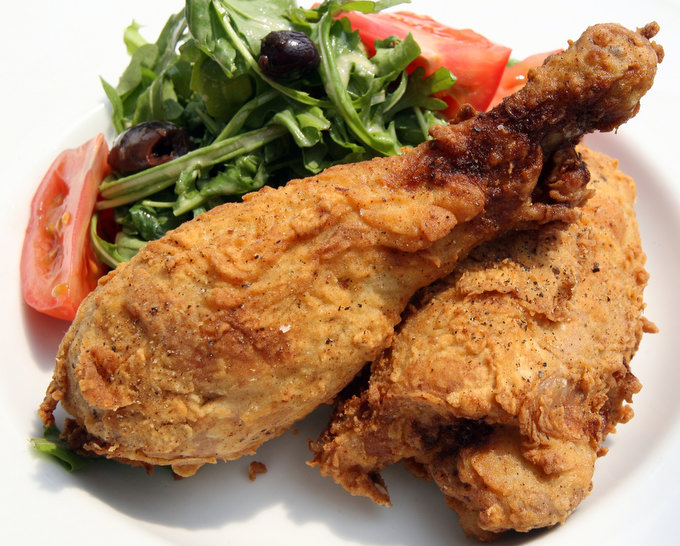 Restaurants We Love: Tavern at the Highlands Country Club

It’s hard to choose the best season to go to Tavern at the Highlands Country Club.

If you go in autumn, your drive along Route 9D in Garrison takes you past some of the best fall foliage in the Hudson Valley. In the winter, three crackling fires keep you warm and toasty. In the spring, the menu is graced with the first baby greens of the season. In the summer — well, the menu is bursting with local produce, harvested from the restaurant’s own farm up the road. 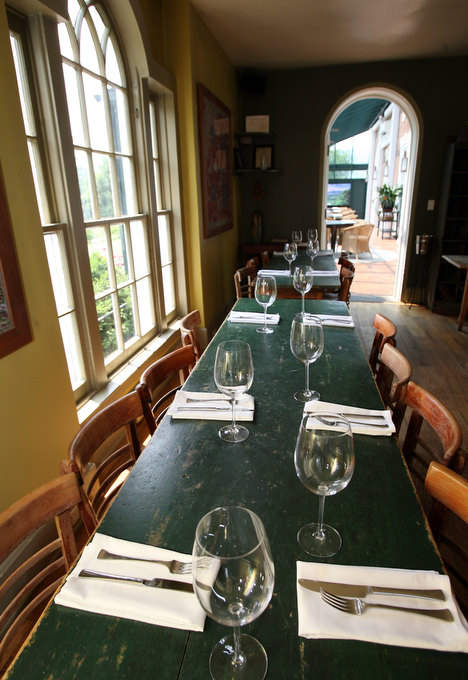 Tavern has been known for serving locally sourced food since the moment it opened in 2004. And when it was Xaviars at Garrison before that, chef-owner Peter X. Kelly was a pioneer in using Hudson Valley ingredients.

With such a rich history behind it, you might say this little restaurant has been a definitive force in shaping the area’s cuisine.

Last year, a new chef took up the cause. Jason Wood, who used to cook at Blue Ridge, a locavore restaurant in Washington; Savoy in SoHo; and Marlow & Sons in Williamsburg; has been executive chef at Tavern since May, 2010. 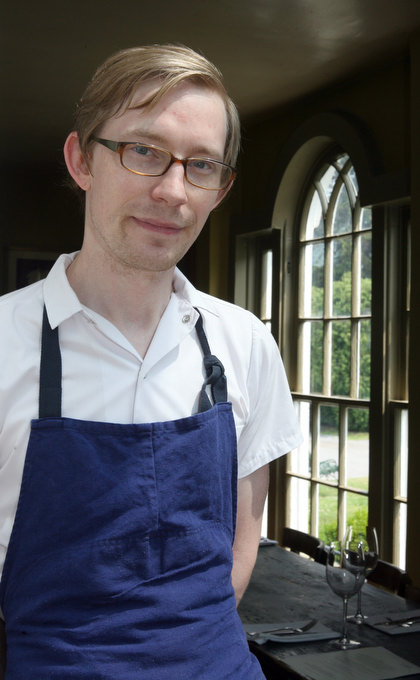 We’re very fortunate that he’s here, too. Ninety percent of his menu comes from local farms, including two right around the corner: Glynwood Farm and Garrison Farms, which is owned by the same couple who own Tavern and its sister restaurant, Valley at the Garrison.

But none of that would matter if the food weren’t good, or you didn’t enjoy the setting where it was served. Both are superb. 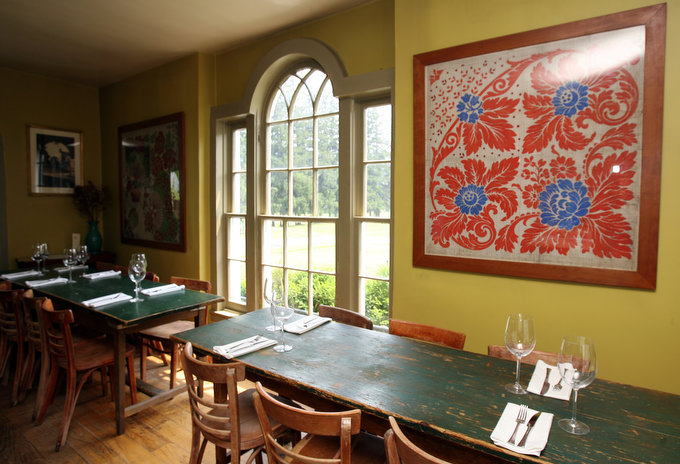 If you’ve been to Tavern before, you’ll recognize the cozy tap room, anchored by a tiny copper bar and one of those three fireplaces. The rustic, rough-hewn tables are communal, and between that and the flickering taper candles, you feel like you’re somewhere between a Colonial-era pub and an Italian enoteca.

The grand ballroom is still there, too — with an enormous fireplace on each end and the equally gigantic crystal chandelier hanging from the ceiling in the center.

What may have changed since your last visit is the veranda, which looks over the ninth hole of the club’s golf course. It’s now covered and enclosed. 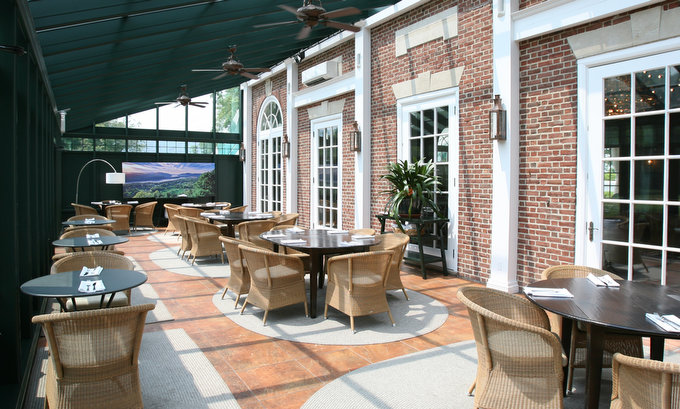 You can dine there in the new wicker-style chairs and watch the players take their final putts while enjoying an appetizer of plump, fresh mussels from Prince Edward Island. (The only thing Wood sources from outside of the region is fish.) 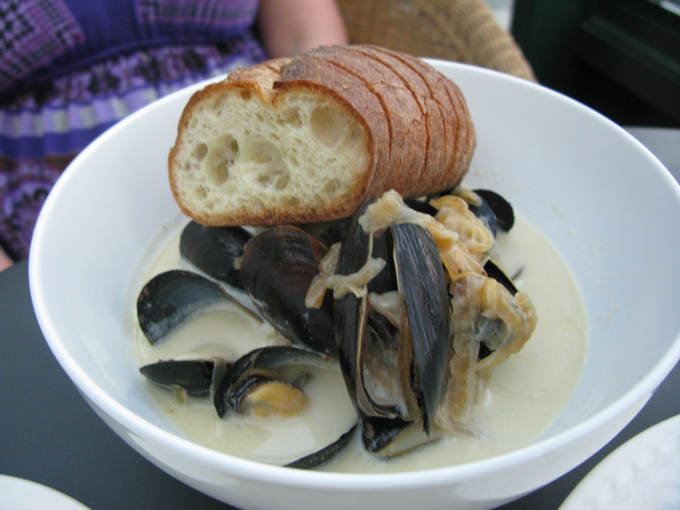 The bacon broth, which mixes with the mussel liquor and some sweet caramelized onions, is sultry, and so addictive you’ll sop up every last bit with your bread.

The pan-seared testa — a pork pate — is sure to become a signature dish at Tavern. 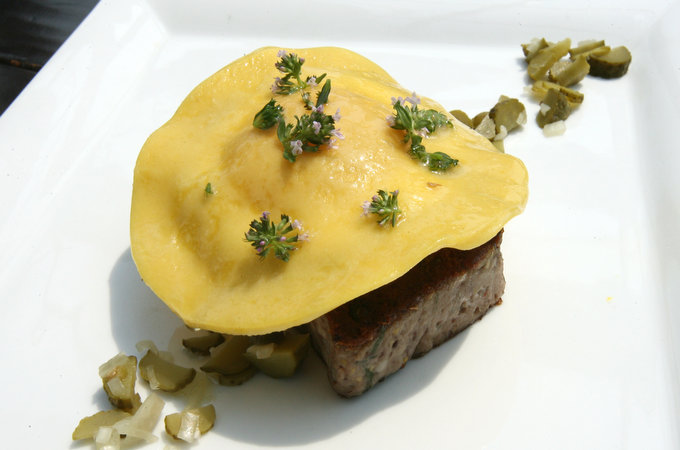 It’s topped with an egg-yolk raviolo, and once you break through the pasta, you get a porky-runny egg mixture that chef Wood says reminds him of breakfast.

The beets in the beet salad are earthy and sweet — 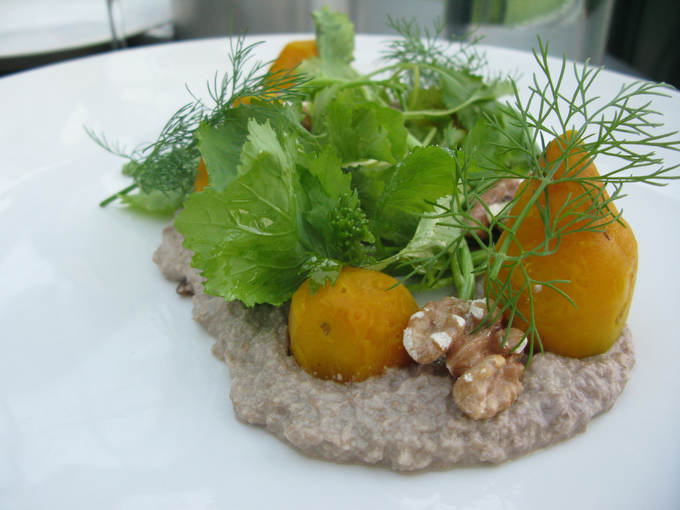 — and you’ll want to drag each one through the rich walnut crema sauce that’s hidden underneath.

Wood is using a trendy technique for his gnocchi dish: He’s flavoring it with hay smoke. He smokes the potatoes first so the outside is burned but the inside is soft. Then he peels the potatoes and makes his gnocchi. You get a hay taste without it being overbearing.

His fried chicken is a miracle. It’s brined with aromatics, lemon and honey for about 2 1/2 hours, then steamed until it’s completely done. 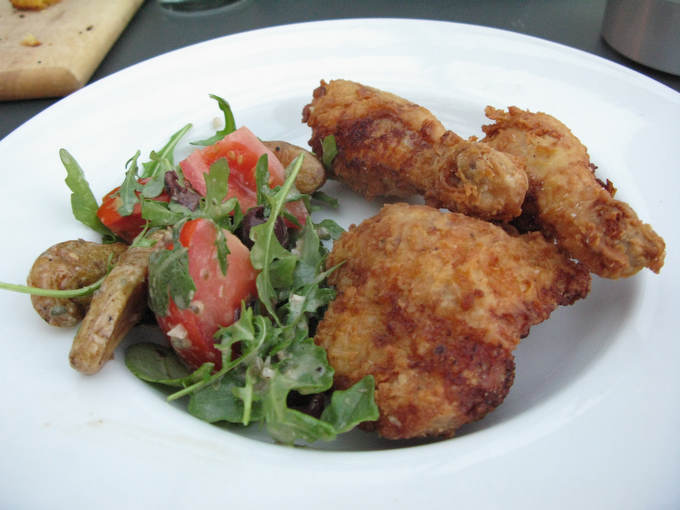 Afterward, he dredges it in buttermilk and flour before a quick dip in the fryer. It comes out shatteringly crisp — and when you cut it, the dish makes a sound like you’re crumpling a piece of paper. The meat is succulent.

Wood was trained at the Natural Gourmet Institute, a health and wellness-based culinary school in Manhattan, so he tends to keep his entrees on the small (that is, more normal) side. Don’t worry. The flavors pack a big punch and you won’t go home hungry. 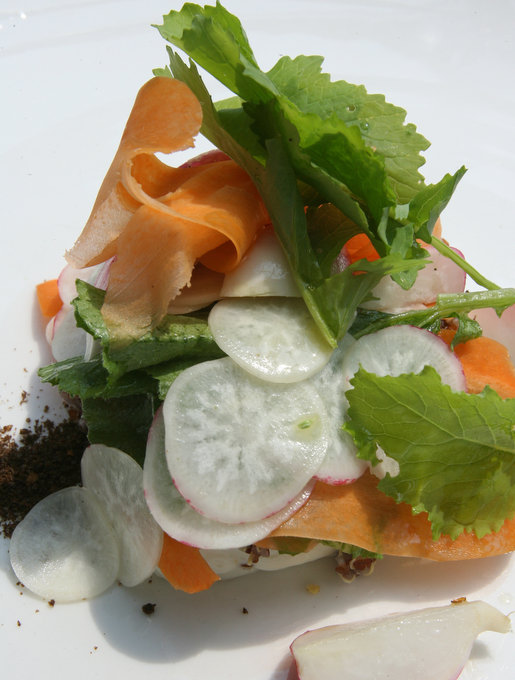 What you will go home with is a good idea of what the Hudson Valley has to offer. “I think a chef has a responsibility to put new twists on classic things,” Wood says. “And I’m telling a story of time and place on the plate.”

At Tavern, it’s a story we love to hear — in any season. 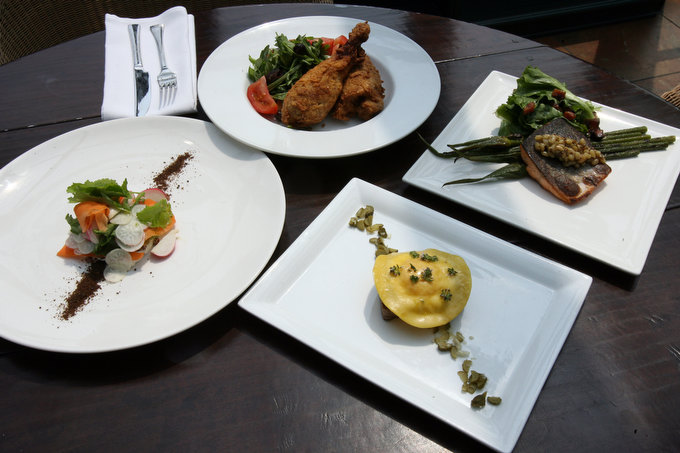 Good to know: The restaurant can be closed during its regular hours when it’s booked for private parties. Do check the web site and then also give a call before you go, especially if you’ll be traveling a long distance.