Gwenael Goulet, the chef-owner of Buffet de la Gare in Hastings, died last week after a long battle with cancer. I wrote an obituary for the paper on Saturday, and I’ll  post it here. I knew Gwen from covering his restaurant over the years, and will fondly remember him as a kind man with a passion for food and his community. I’ll miss him very much.

If you’d like to share memories or wish the family condolences, please feel free to do so in the comments. Here’s a photo I took of Gwenael and his wife, Annie, back in 2006: 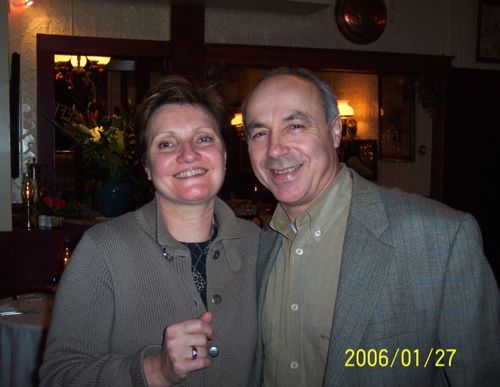 The story, after the break.

Gwenael Goulet, the chef-owner of Buffet de la Gare in Hastings-on-Hudson for 31 years and a pioneer in Westchester’s dining scene, died Tuesday July 19 after a 10-year battle with cancer.

Goulet’s cooking became the benchmark for classic French food in the Lower Hudson Valley. And yet, Goulet and his family — his wife, Annie, and children, Gwendal and Stephanie — found a way to make their tiny, romantic restaurant — with its pressed tin walls and crisp white tablecloths — feel like an extension of their home. Not only were they hosts, they were their customers’ friends. Annie Goulet said she and her children will keep the restaurant open and continue to serve Gwenael’s menu.

He was known for his rich, warming cassoulet and coq au vin — both served tableside from copper pots — silky foie gras terrine and decadent vol au vent, a puff pastry cup, which he filled with lobster in a truffle champagne sauce. His creme brulee was legendary.

“It is the best classic French that Westchester County has now,” says Jean Le Bris, the owner of Vox in North Salem and a friend for more than 40 years. “His legacy is there, and it’s established for many years to come.”

The Goulets took over Buffet de la Gare in 1980, when there were few fine dining restaurants in the area. The menu, though classic bistro-style, was treated as haute cuisine at the time. Over the years, as people came to see French food as not just for special occasions, the restaurant became more the bistro that Goulet always intended it to be.

“He always understood what bistro and brasserie cooking should be, and the pleasures associated with it,” said Peter X. Kelly, the chef-owner of Xaviars at Piermont and X20 Xaviars on the Hudson in Yonkers, and a good friend of the Goulets.

Gwenael Goulet was born in Locmine, France, on May 1, 1950. As a child, his friends and family called him loustique — the rascal — because he was an innocent little troublemaker. When he was about 6, he took grocery coupons that were meant for pregnant women and convinced an elderly lady to buy them on the pretense that they were raffle tickets. When she got home and put on her glasses, she realized she’d been duped, but Goulet had already spent the money on candy.

In his teens, he played semiprofessional soccer for a team called Union Sportif Concarnoise before moving to Paris to work in the restaurant business. He met his wife, Annie, in their hometown of Concarneau, Brittany, while on vacation from his job as a maître d’hôtel at Le Petit Montmorency in Paris. They married in 1974.

He trained at the Centre de Promotion de l’Hôtellerie et de la Restauration in Vannes and moved to the U.S. in 1979 to work for Maxime Ribera, a friend from home and the best man at the Goulets’ wedding. Goulet started by peeling potatoes at Buffet de la Gare, and by October 1980, he owned the restaurant.

“There was always an abundance of food — at Thanksgiving and Christmas, lobsters, oysters, caviar — so much food,” said Le Bris, who grew up on the same street as Goulet in Concarneau and celebrated holidays with the Goulets here in the U.S. “Every year, we kept telling him, ‘Next year a little less!’ But every year, he wants to be generous to everybody. He was so gentle and generous.”

He loved a party, even though he would show up late and be the last to leave.

“We started telling him the party would start at 4 o’clock, so when it actually started at 6, he would be there,” said Le Bris. But once he got there, you couldn’t tear him away.

“From the moment the music came on, Gwen and Annie were always there,” said Kelly. “They were a staple on the dance floor.”

At home, he found pleasure in gardening. “It was his pride and joy,” said Kelly. “He got great satisfaction out of that.”

And he took equal satisfaction in feeding others.

“Nobody does it better than he does,” says Le Bris. “His love of his food shows through his dishes, and that’s for everybody still to appreciate.”

In addition to his wife, son and daughter, he is survived by a granddaughter, Jenna; two sisters, Francoise Ceccolini of Hastings and Annaig Goulet of Valbonne,?France; and two brothers, Wanig Goulet of Concarneau, France and Perig Goulet of Charleston, S.C.