People are reading
You are at:Home»Restaurants»The Worst Line-Cutting Experience You’ve Ever Had?

I went to Chop’t, the choose-your-own salad spot in Rye Brook, for lunch today. I really like Chop’t. There are a ton of choices between lettuce, mix-ins and dressings, and even though there’s a line, it usually moves fast. 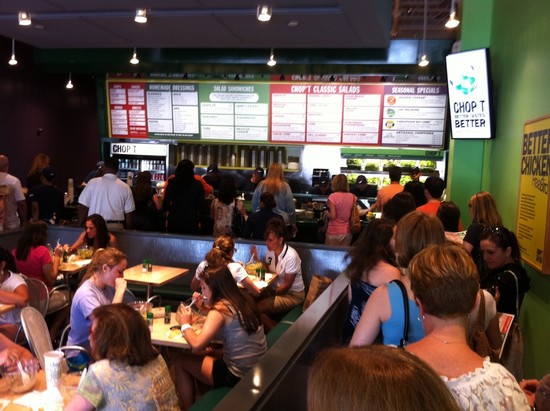 Today, I got in the line — I was about as far as this photo, which was taken in June — and three women were standing off to my left a little. They slithered in in front of me, which I ignored, since they were kind of there to start with anyway.

Then they saw their friend at the door. “Over here!” they started waving. Then two teenagers arrive. They waved for them, too. Now there were 6 people in front of me.

The line moved forward a little and another teenager arrived. Then a man in Madras shorts came. The two women behind me and I looked at each other in disbelief. We got to the front of the line, and I was just about to order my salad when — yes, you guessed it: another woman arrived at the front of the line.

I’m not usually one to say anything, but I couldn’t keep my mouth shut any longer.

“Will there be anyone else joining you for lunch today?” I asked, with as much as sweet sarcasm as possible.

As I was about to order my salad, I looked across the crowd standing in front of the counter, watching their salads get chopped (or “chop’t,” if you will) and every single person was someone who had cut the line.

I believe it was the worst line-cutting I’ve ever experienced. So that brings me to ….

And let’s hope that some line-cutters might (just might) see our grievances and have a little less entitlement next time!

One of my friends just sent me the link to Larry David’s Chat and Cut! Here you go folks!