People are reading
You are at:Home»Farms»The Farmer & The Chef: A Tale of Two Passions
Meet the farmer, John DeMaria of Hemlock Hill farm in Cortlandt Manor, and the chef, Matt Hutchins of Birdsall House in Peekskill. 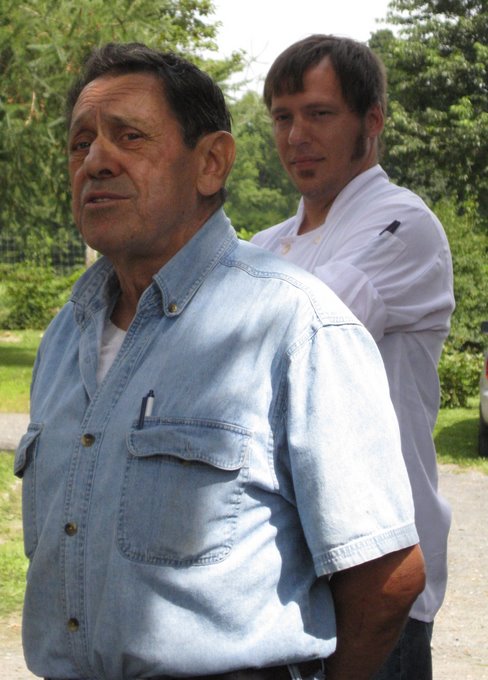 Although they are generations apart, they share an intense love and passion for what they do.  At a recent Culinary Collaboration event, a small group of food lovers learned first-hand about the relationship between farmer and cook when the members toured the farm and then enjoyed a four-course lunch at the restaurant. Patrice Costa reports.
THE FARMER at HEMLOCK HILL
John DeMaria and his daughter, Laura, run this family farm in Cortlandt Manor.  John is the epitome of a farmer  —  strong, determined and a little weathered (yet, the youngest 79 year old I’ve ever met!).   On this beautiful summer morning, he spoke quietly to our group telling them all about Hemlock Hill Farm. 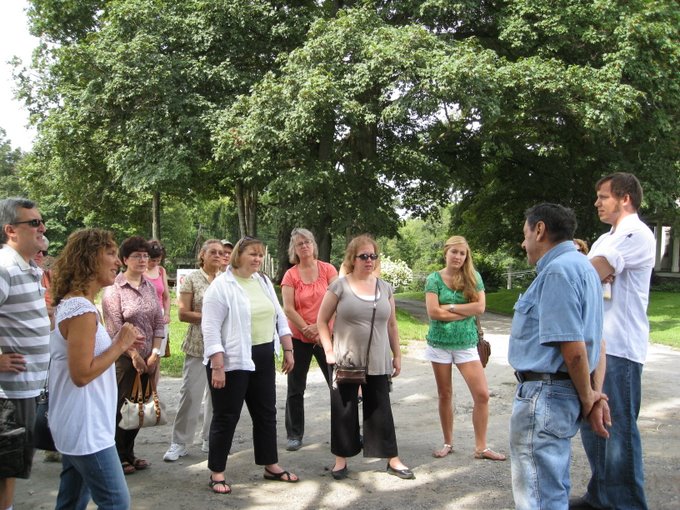 The DeMaria family has owned the 120 acre farm since 1932 when it was primarily a dairy and apple farm.  When his father died in 1957, John took over the responsibilities of running the farm and began raising livestock.  The family has faced many financial difficulties over the years, and it’s been a struggle to keep the farm.  They can breathe a big sigh of relief because this month they received a NYS Farmland Protection grant that has been five long years in the making.  The $2.7 million grant (50 percent from New York State, 25 percent from Westchester County, and 25 percent from the towns of Yorktown & Cortlandt) allows the state to purchase a conservation easement (development rights) to preserve the land.  John was once told that he loves every blade of grass, back and front, and now all 120 acres of that grass will remain farmland forever. 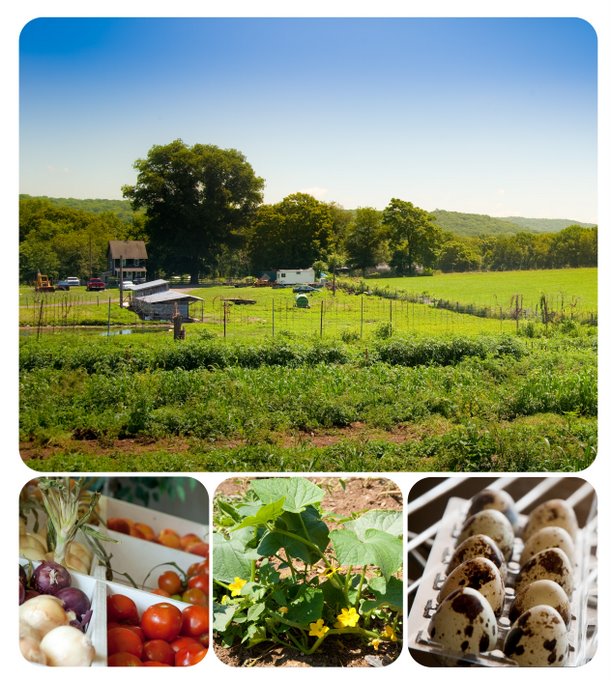 (photos by Margaret Rizzuto Photography)
Want to purchase your food right from the source?  The farm raises between 5,000 and 6,000 Plymouth Rock, Bard Rock & White Rock chickens a year.  They have a few hundred Road Island Red chickens for egg laying. 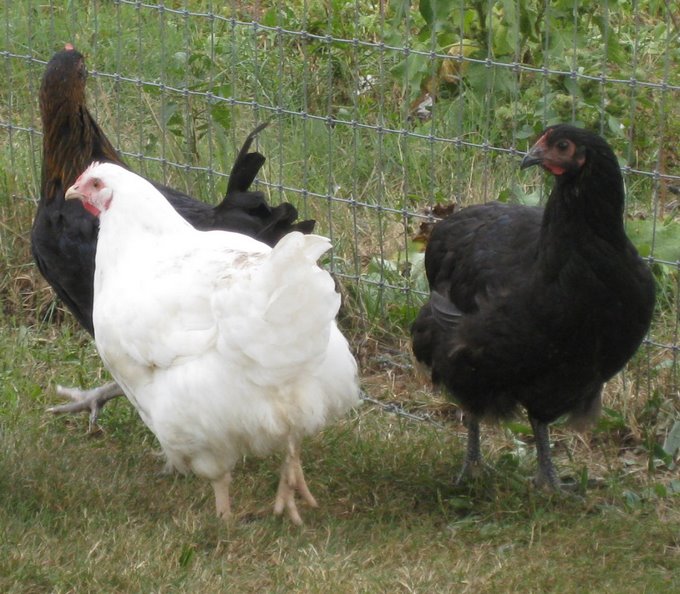 More than 900 turkeys arrive around September or October from a farm in Pennsylvania for Thanksgiving (I’ve been buying my turkeys here for the last six years, and they are hands down the most deliciously moist turkey I have ever tasted  —  make sure to place your order early!).  The farm is home to about 80 heads of Black Angus cattle, but with the grant they have plans to expand to over 100 heads. 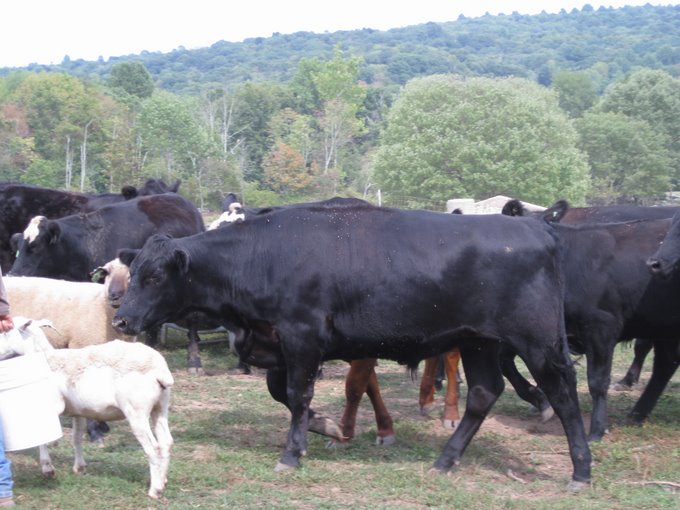 They raise approximately 500 Yorkshire pigs a year.  For vegetables like tomatoes, zucchini, peppers, onions, potatoes, various lettuces, or garlic, you can see what’s fresh picked in the store or head out into the fields to pick your own.
THE CHEF at BIRDSALL HOUSE
After our farm tour, our group continued on to Birdsall House in Peeksill, where we settled in on their brand new outdoor beer garden. 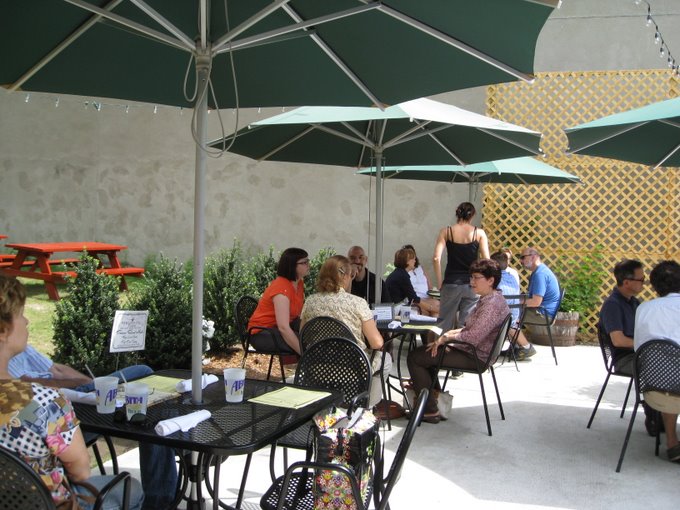 Our lunch and beer pairing menu was designed by chef Matt Hutchins.  He is the culinary force of Birdsall House, which is just shy of celebrating its year.  Matt is endearing as he humbly tells us how much he appreciates that we came to enjoy his food and listen to his story.   His gratitude to Hemlock Hill is apparent.  I agree with his sentiment that his food tastes good because of the quality of the ingredients from the farm.  He was happy that we were interested in learning about where our lunch came from and reminds us that it doesn’t get any fresher with the farm being only about four miles away. 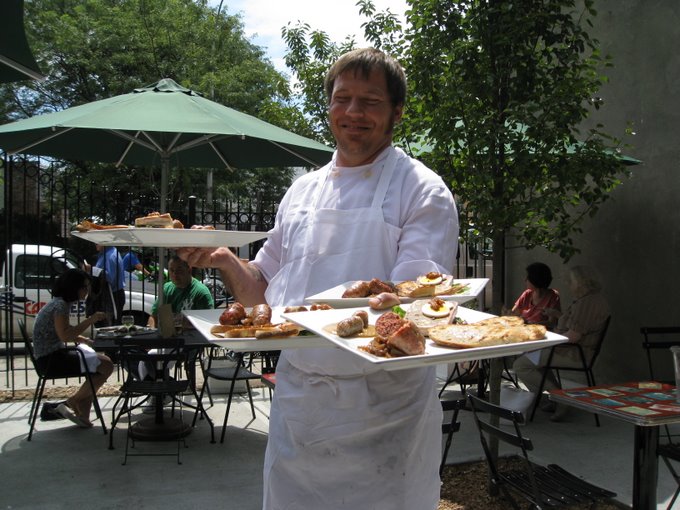 Warm, inviting and passionate, Matt and his wife, Bonnie, took turns sharing their story.   They were living in Florida when Matt decided to pursue his dream of being a chef.  They came “up north” so Matt could attend the Culinary Institute of America.  Every student works an externship for the final part of the curriculum.  Matt really hit the culinary lottery when he attained an externship at Chez Panisse in Berkeley, California, with Alice Waters, often referred to as the “mother of the slow food movement”.  This acclaimed restaurant is “convinced that the best-tasting food is organically and locally grown and harvested in ways that are ecologically sound by people who are taking care of the land for future generations.”  Coming from that culinary environment, it is no surprise that Matt is so thoughtful and focused in his craft or that charcuterie items such as pâté, sausage or homemade condiments are showcased on the menu. 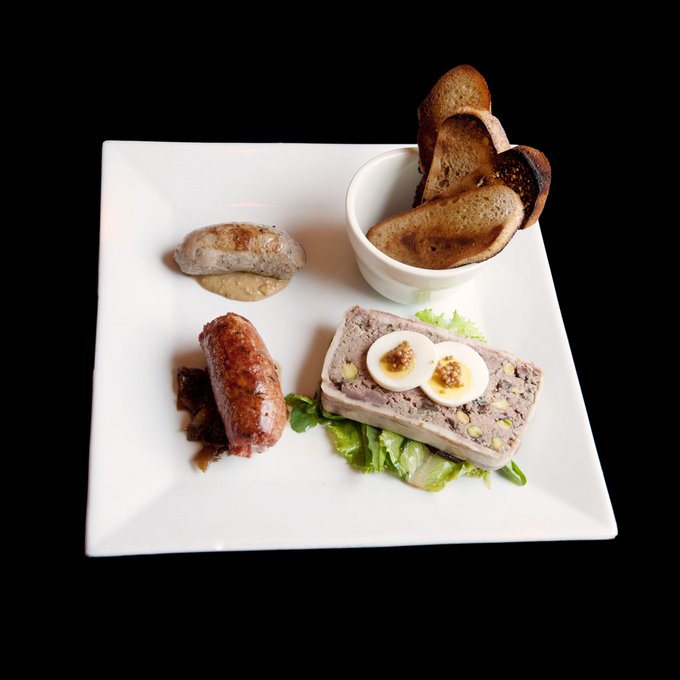 (photo by Margaret Rizzuto Photography)
pork and fennel sausage with porter and caraway mustard (top left)
spicy lamb sausage with red onion jam (bottom left)
country pork pâté with pickled egg and mustard seed caviar (bottom right)
Keep an eye out next Spring when Matt and Bonnie will start marketing their own product line called Buttermilk Jack with condiments like porter and caraway mustard, smoky tomato marmalade, and fennel and caper relish.
Matt defers to his wife, Bonnie, when asked about their lessons in sustainability in Berkeley.  By eating healthier and supporting local farms (and restaurants using their products), she feels we can be a part of promoting change in the quality of our food.  Bonnie then proudly gave us a tour of the small herb and veggie garden that she oversees in the back and mapped out her plans for expansion next year. 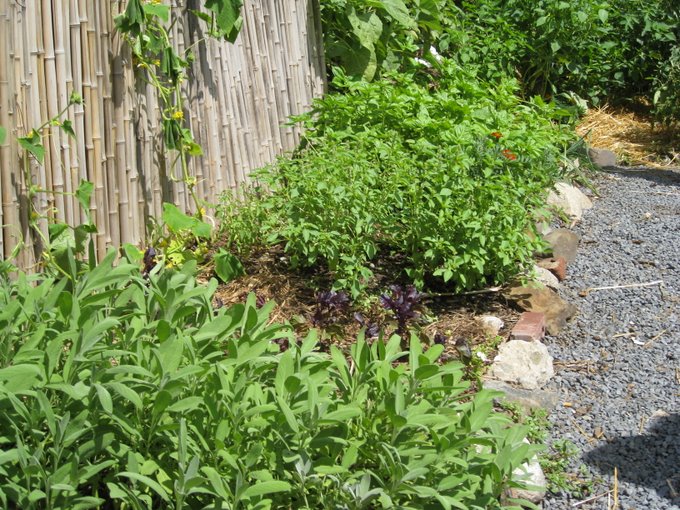 Birdsall House purchases its meat almost exclusively from Hemlock Hill Farm, weighing in per week with about 12 to 18 chickens, 180 pounds of pork, 80 pounds of ground meat, and 4 to 6 slabs of bacon.  From time to time, you will also see duck, quail, lamb, rabbit, and goat on the menu.  Vegetarians are certainly not forgotten with choices like Wild Hive polenta served with a fried soft-boiled egg (okay, exactly how is that done?) or the beet and grain burger.  Last, but certainly not least, enjoy a brew or two from their ever-changing list of local craft beers.
The 411 on Birdsall House and info on Hemlock Hill Farm:
Hemlock Hill Farm is located at 500 Croton Avenue in Cortlandt Manor and is open 7 days a week (Monday thru Saturday 9:00 am to 5:30 pm and Sunday 9:00 am to 2:00 pm) selling its own fresh chickens, beef, pork, lamb, Italian sausages, smoked bacon, eggs, and seasonal produce.
birdsall house cortlandt manor Culinary Collaboration Farms Hemlock Hill Farm John DeMaria matt hutchins patrice costa Peeksill Restaurants
Share. Twitter Facebook Google+ Pinterest LinkedIn Tumblr Email
Previous ArticleMariela’s Wine & Espresso Bar Opens in Pound Ridge
Next Article Here’s to Great Beer: Check Out These New Spots for Craft Beer in the Lower Hudson Valley