People are reading
You are at:Home»Cooking»Rosh Hashana Recipes: The Best Thing They Ever Ate (For Rosh Hashana): Local Chefs on Their Favorite Holiday Foods

[Note from Liz: This story is from 2011, but still has some great suggestions for Rosh Hashana recipes.]

Linda Lombroso had an absolutely terrific story in yesterday’s paper — a riff on the Food Network’s show “The Best Thing I Ever Ate.” I’ll just let her tell the story:

The smells and tastes of Jewish holiday meals tend to linger in the mind for years — even if they’re memories of gefilte fish served straight from the jar. We decided to set the bar higher. 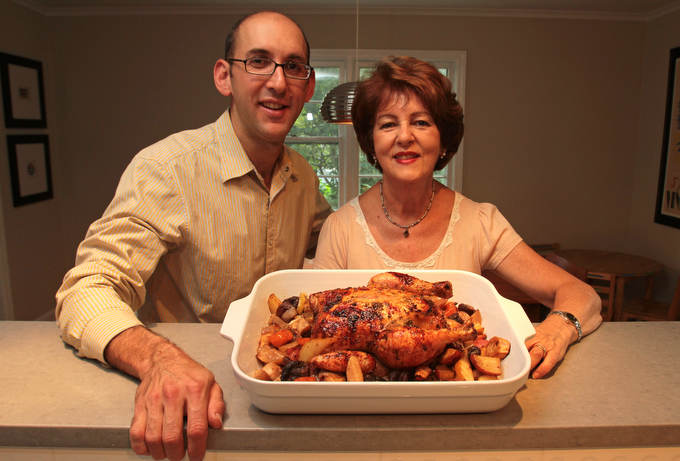 For this Rosh Hashana, which begins at sundown on Sept. 28, we’ve taken our cue from Food Network’s “The Best Thing I Ever Ate,” and asked seven local chefs, restaurateurs and food experts to tell us about the best Rosh Hashana dishes they’ve ever had. From Israeli poppy-seed babka to crispy potato kugel from the suburbs of Philadelphia, everyone had a dish that still gets them excited — and reminds them of happy holiday meals with family.

Favorite dish: Chicken roasted with fall vegetables, fruits and honey, made by his mother, Avril, owner of Avril Kaye Caterers in Scarsdale

The story: Kaye, who lives in Mamaroneck, has long adored his mother’s roast chicken, a dish he describes as something along the lines of a chicken tzimmes. “I am a big fan of sweet and savory combinations, and this dish is all about the combination of sweet and earthy flavors,” he says. “The veggies add so much to the flavor of the bird, and of course the vegetables get to soak up all those wonderful chicken drippings. It is also a smart move on her part — this is essentially a one ‘pot’ (or in this case, ‘casserole’) dish, which is always helpful at a Rosh Hashana meal, where you seem to inevitably have so many pots and pans in action.”

Tip: Kaye says his mother rubs the chicken with olive oil, garlic and fresh herbs before roasting it on a bed of root vegetables tossed in sweet wine. “She also bastes the bird occasionally with all the wonderful sweet juices in the roasting pan, which gives the chicken this lovely glaze.”

Jamie Geller, author of the “Quick and Kosher” cookbook series and editor of the magazine “Joy of Kosher with Jamie Geller” 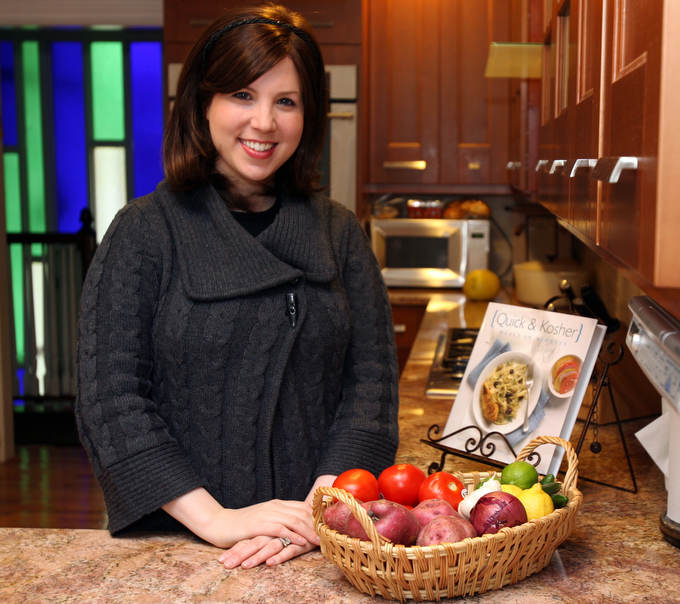 Favorite dish: Potato kugel made by her father and grandfather

The story: “This is literally one of the best things I’ve ever put in my mouth,” says Geller, who grew up in Abington, Pa., a suburb of Philadelphia, and now lives in New Hempstead. Geller’s father would grate the potatoes by hand and never measured anything. “My mother was always like, ‘Please make that kugel,’ and we would salivate and watch him as he would make it. We always wanted to dig into it right when it came out, and he would always hold us back because it was too hot.” The dish, she says, has its roots in Eastern Europe — and Geller is still trying to duplicate it at home. “I haven’t yet figured out that fluff, that lightness, that height. It’s baked in a loaf pan, which will give you four to five inches of height. We used to fight over the end, the corner piece, because you get all that extra coveted crunch around the edges.”

Tip: Geller likes to make potato kugel in individual cups to make it more festive, and she always warms the oil in the oven before adding the potatoes, eggs and onions, a technique that assures you’ll get that “coveted crunch” on the outside, she says. Never freeze potato kugel, says Geller, because the potatoes get waterlogged. “This is one of those things you want to make fresh, especially on the holidays.”

More, including recipes from Abigail Kirsch, Scott Weiss of Fig & Olive, Ethan Kostbar of Moderne Barn, Dan Glickberg of Fairway and Dorit Kramer of Art Cafe, after the jump. 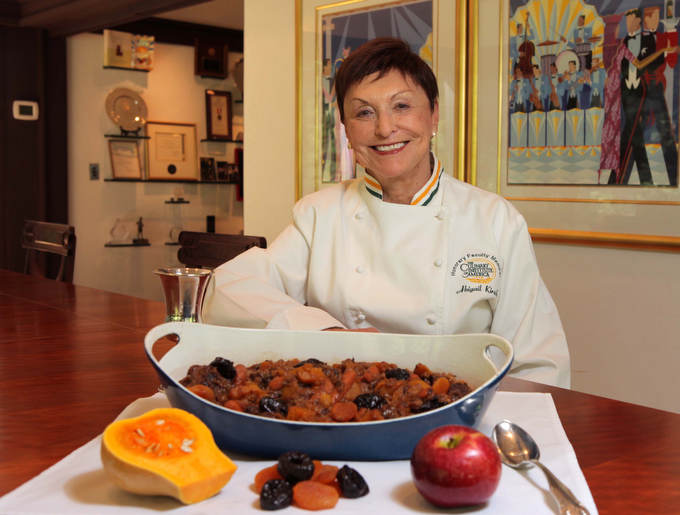 Favorite dish: Tzimmes prepared by her grandmother in Dorchester, Mass.

The story: “The heady richness of the stew, the combination of flavors and the addition of meat combined with the dried fruits, fresh carrots and honey makes this traditional holiday dish unforgettable,” says Kirsch, who grew up in Brooklyn and New Rochelle and now lives in Pound Ridge. “My most favorite memory is seeing the brilliant smile on my father’s face as he watched the casserole of tzimmes placed in front of him on the white tablecloth for the Rosh Hashana repast. It was priceless.”

Tip: Slow cooking — and cooking away all the liquids — is essential to making this dish great, says Kirsch. Drain off excess liquid, she says, and adjust the flavors by balancing the honey and lemon. 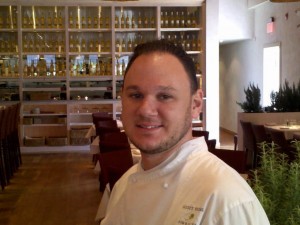 The story: “Jewish cuisine growing up wasn’t exactly intricate or elaborate, but this was one of those dishes that was a little bit different, certainly for a child,” says Weiss, who was raised in Pomona and Suffern and now lives in White Plains. “The name was a little funky and it was a good dish. I always liked it. It had a nutty almost sweetness, some caramelized onions cooked down in a little chicken stock. There was a little substance to it. It didn’t melt away in your mouth.”

Tip: Don’t cook the noodles all the way through before adding to the kasha, says Weiss. For a modern twist, he suggests using fresh herbs and perhaps some Middle Eastern spices to complement the nuttiness of the grain. 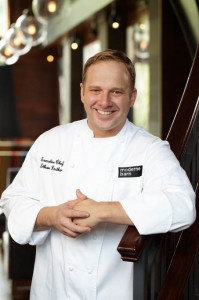 Favorite dish: Poppy-seed babka from a bakery in Jerusalem

The story: “Having grown up as cultural American Jews in Kansas, my parents wanted a deeper religious meaning in their lives,” says Kostbar, who lives in Fairfield, Conn., but had moved with his family to Kfar Adumim, a small settlement in Israel’s West Bank, in 1982. That year, Kostbar’s father already had a sukkah ready, where the family would gather each evening to blow the shofar in honor of the Jewish New Year. Along with apples, honey, dates, pomegranates, challah and rugelach, there was a special poppy-seed babka. “My father, who in his previous life in the States was a parole officer, was cooking at a Sheraton hotel in downtown Jerusalem. On the way home, he picked it up in the Orthodox old quarters of the city. I don’t remember which bakery, and neither does he. We loved gathering around as a family outside, looking up through the palm trees of our sukkah, listening to the distant sounds of the shofars, eating all those sweets and enjoying the best poppy-seed babka. Now, Rosh Hashana comes and goes without much thought. In Israel, it’s their New Year, and everyone celebrates it. I have no recipes, just fond memories.” 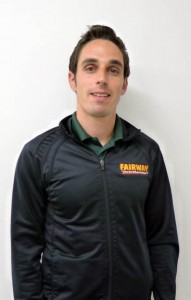 The story: As the great-grandson of Fairway’s founder, Glickberg grew up eating brisket from the store’s catering department. The holidays were no exception. “I had good food all the time, so in that respect, I was lucky,” says Glickberg, who was raised in Irvington and lives in Manhattan. London’s brisket tastes great, in large part, due to its high-quality ingredients — which are, naturally, from Fairway, he says. “The last holiday, I actually made the sweet and sour brisket in my apartment, which is a little more difficult than if you do it in a house with a big kitchen. I brought it to my mom’s house in Irvington. It came out great. I was pretty proud of myself.”

Tip: If you don’t feel like tackling London’s recipe, Fairway will offer his sweet and sour brisket on its holiday catering menu (at Fairwaymarket.com). 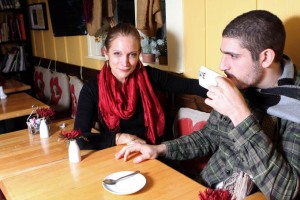 Dorit Kramer and her son Daniel, owners of the Art Cafe. ( Tania Savayan / The Journal News )

Favorite dish: Honey cake made by her grandmother in Israel

The story: “As a child growing up in Jerusalem, I remember waking up on the morning before Rosh Hashana to the smell of my grandmother’s honey cake,” writes Kramer via email from Israel, where she’s visiting with family. “I couldn’t wait to eat it and would always steal a piece before the evening. Walking then around my neighborhood, the smells of cinnamon, cloves and rosewater would fill the air. Now, every holiday, I bring the same feeling to my children and grandchildren and to Art Cafe.”

Tip: To make a version of the honey cake served at Art Cafe, Kramer suggests adding rosewater, pecans and cardamom. Unfortunately, she won’t be serving it at the cafe this year, since she’ll be away for the holidays, but with her recipe, you can make it yourself. 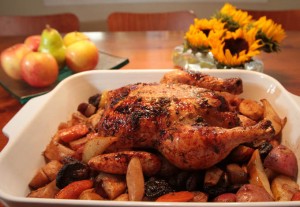 Arvil Kaye, a caterer and the mother of Adam Kaye, the kitchen director at Blue Hill at Stone Barns, gave us this recipe. Adam says his mother rubs the chicken with olive oil, garlic and fresh herbs before roasting it on a bed of root vegetables tossed in sweet wine. “She also bastes the bird occasionally with all the wonderful sweet juices in the roasting pan, which gives the chicken this lovely glaze.” 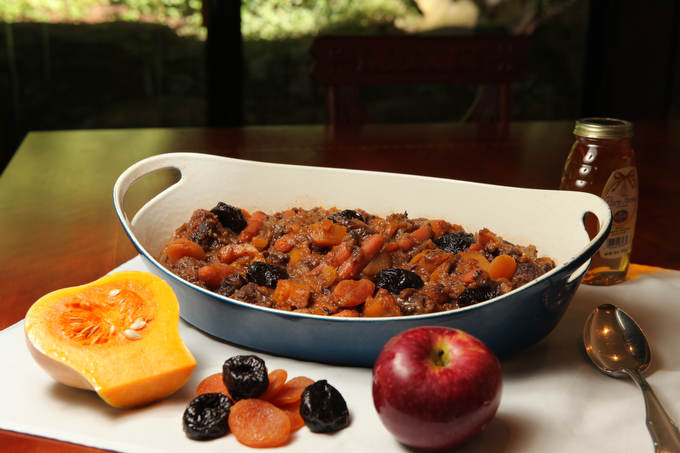 “The heady richness of the stew, the combination of flavors and the addition of meat combined with the dried fruits, fresh carrots and honey makes this traditional holiday dish unforgettable,” says Kirsch, who grew up in Brooklyn and New Rochelle and now lives in Pound Ridge. 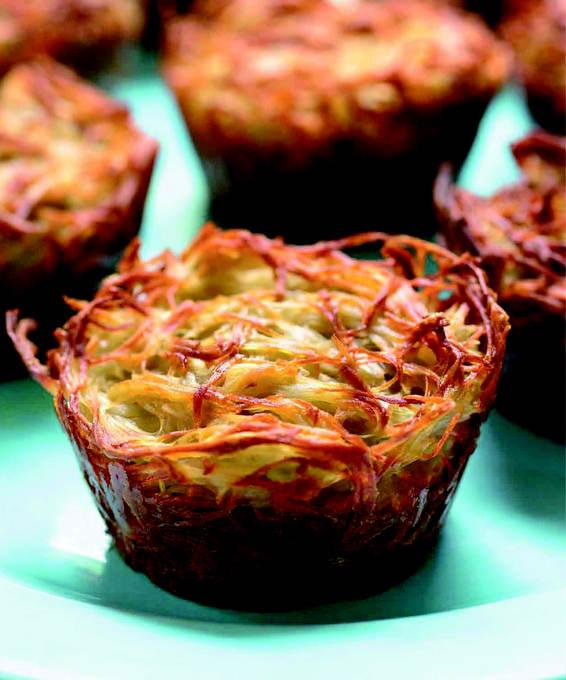 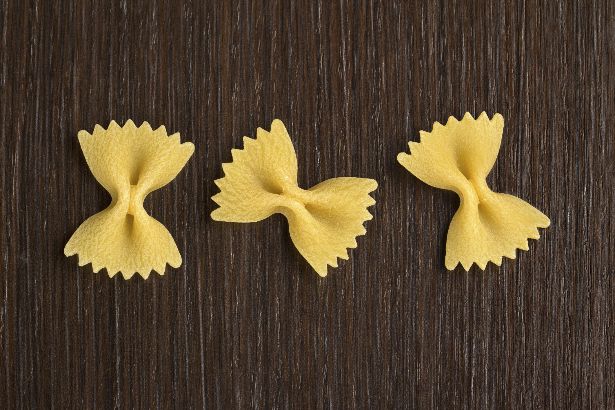 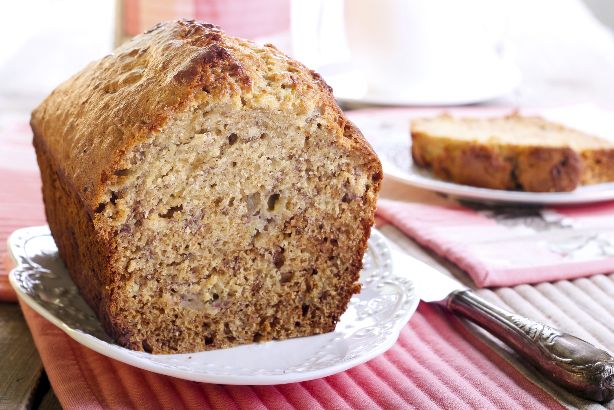