People are reading
You are at:Home»Recipes»Breakfast»Christmas Morning Cinnamon Buns

If you’re hosting Christmas, then let’s face it: This is going to be a crazy, crazy week. I know I’ll be going through my recipes trying to find the perfect stuff for brunch, dinner, Christmas Eve dinner. Sigh. Here’s a little help. Lauren Groveman, of Larchmont, is coming out with her own cooking show. Journal News reporter Heather Salerno caught up with her a few weeks ago for her best Christmas morning recipes, and these cinnamon buns fit the bill. Take a look: 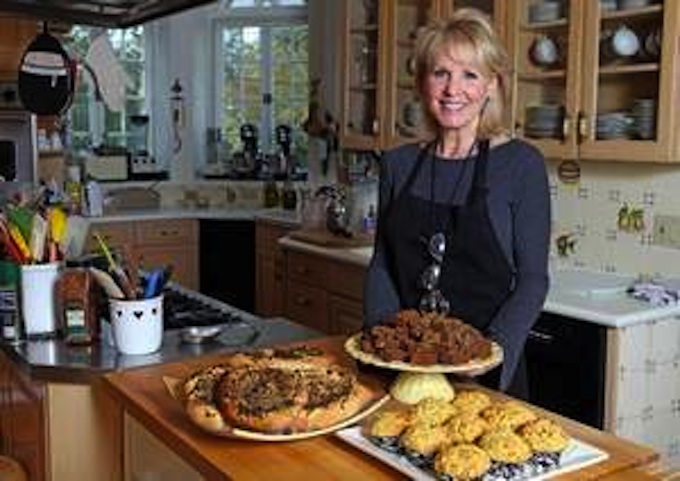 There’s a picture of Lauren in her Larchmont kitchen with lots of homemade goodies. 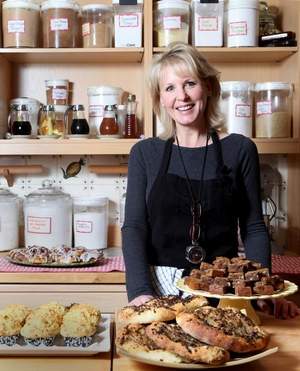 Here she is again with her cinnamon rolls in the background.

These photos, by the way, are by Tania Savayan, a Journal News photographer.

The great thing about baking cinnamon buns on Christmas — or anytime — is that your house smells so good! Here’s the recipe. Enjoy!

Ingredients for the dough

Up to 3 ¾ cups unbleached all-purpose flour

For the cinnamon-raisin filling

For the maple egg glaze

For the powdered sugar glaze

4 tablespoons milk, or as needed

To assemble the dough

In a large bowl, combine 2 ½ cups flour, sugar, undissolved yeast, and salt. Heat water, milk, and butter until very warm (120 to 130 degrees). Gradually add to flour mixture. Beat 2 minutes at medium speed of electric mixer (with the paddle attachment), scraping the bowl occasionally. Add the egg and 1 more cup of flour; beat 2 minutes at a moderately high speed. Using a wooden spoon, stir in just enough remaining flour to make the dough leave the sides of the bowl. Turn dough out onto lightly floured surface and knead until smooth and elastic, about 2 minutes. Cover with a towel and; let rest 15 minutes.

Gather the fillings: In a small bowl, combine sugar and cinnamon with a whisk. Put raisins in another bowl.

To assemble cinnamon buns: Line two large baking sheets with parchment paper. Divide the dough into 2 equal portions; roll each portion to approximately 12 by 8-inch rectangle. Brush each liberally with melted butter; sprinkle with cinnamon sugar (use fingers to help coat dough evenly), then scatter the raisins on top (use half of each for each half of dough).

Beginning at short end, roll up tightly as for jelly roll. Pinch seam to seal. With a sharp serrated knife, cut each roll into 7 pieces. Place, cut sides up, on prepared baking sheet(s). Cover; let rise in warm, draft-free place until doubled in size, about 1 hour. Or, for morning buns, cover the buns with a clean kitchen towel, and then again with plastic wrap. Refrigerate. In the morning, preheat the oven to between 350 and 375 degrees and allow the buns to sit out of refrigeration for 1 to 1 ½ hours before glazing.

To glaze and bake: Mix the egg with the water and maple syrup. Strain into another bowl. Brush the buns with the glaze and bake for 20 to 25 minutes or until golden and cooked through (rotate the sheet front to back once during baking and, if becoming overly brown, cover loosely with aluminum foil (shiny side up). Remove from the oven and let buns sit on the sheet for 5 minutes.

While the buns bake, assemble the powdered sugar glaze: In a small bowl, whisk together powdered sugar and enough milk to make a glaze that’s thick but able to be drizzled luxuriously. Remove to a wire rack that sits over wax paper. Drizzle with powdered sugar glaze. (Alternatively, you can spoon and then spread the glaze over the warm buns.)