People are reading
You are at:Home»Restaurants»Friday Fish Dish: Lemon Sole with Capers

From an archived series on fishmongers and their recipes, here’s a story by Linda Lombroso. Ebb Tide has since closed (Bar Taco is in its place now), but we really like this recipe, so we are re-running the story anyway.

At Ebb Tide Seafood in Port Chester — which closed a couple of years ago — one of the hottest dishes on the menu was also one of the simplest: sautéed lemon sole with caper sauce.

As part of a series on fishmongers and their recipes, which will run through Lent, we talked to Cynthia Thomsen, who ran the waterfront restaurant and fish market with her brother, Tav. 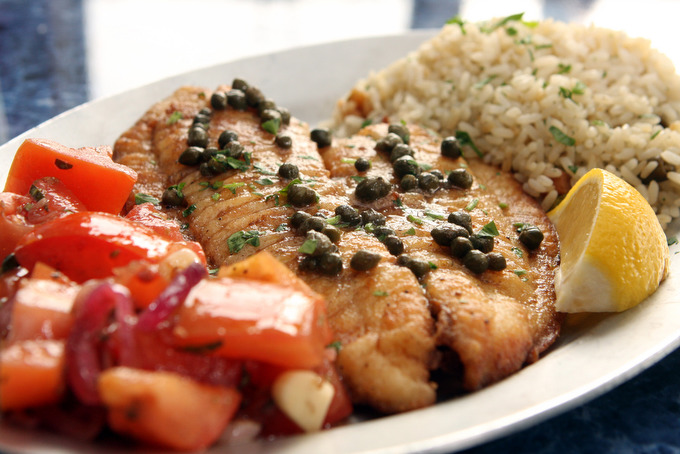 Thomsen, who’s also the chef, was a big fan of lemon sole, a light white fish that cooks quickly and flakes easily. She likes the thickness of the fish for this recipe, and prefers it over simple flounder fillets, which are usually thinner.

During busy seasons, Ebb Tide flew through pounds of lemon sole, which they served with a seasoned plum tomato salad and white rice with mixed vegetables. The entire entreee took just a few minutes to prepare.

Thomsen uses a half-pound of fish for each portion. One of the keys to preparing a successful dish, said Thomsen, is being careful to cook the fish thoroughly while keeping it nicely golden brown. “You have to check to make sure it’s cooked all the way through,” she said. “You can put a hairline cut in the thicker part of the fish to see that it’s cooked.”

Once the fish is cooked, it’s removed from the pan and set aside until the caper sauce is ready – which takes just a few additional minutes. The dish is extremely easy to prepare, assured Thomsen.

Lightly coat both sides of the fish fillets with flour.

Heat olive oil and butter over medium heat. After butter melts, add fish to pan. Cook one side until golden brown, then flip and cook the other side. Check for doneness by making a small cut in the thickest part of the fish.

Remove fish from pan and set aside.

Add to the pan drippings: juice of 1/4 lemon, white wine and capers. Cook together a few minutes until the sauce becomes brown.

Pour the sauce over the fish.