“Notes” checks out what people are drinking, and what they’re thinking, at the Captain Lawrence tasting room in Elmsford each week.

Perhaps you’re finally putting the last remnants of the St. Patrick’s Day hangover beyond you. Perhaps you spent that impossibly sunny Saturday celebrating mid-March madness by gulping green beer in packed pubs until your face matched the color of your brewski, your plastic hat, your Show Me Your Shamrocks t-shirt, your boxers.

Others opted for a different route than the watering holes in Manhattan, White Plains and anyplace else with a liquor license, popping into the relative quiet of the Captain Lawrence tasting room instead. While the music was boisterous, the Dropkick Murphys indeed singing loud and singing proud, one was free to move about the room. There was hardly a cheap plastic derby hat in sight, and the beer very definitely was not green. In other words, if you were seeking to toast the Emerald Isle with unruly behavior and tawdry tokenism, you were probably in the wrong place.

Stephanie Winkelmann and Will Castelli, the pierced and dreadlocked singer and bassist, respectively, in a blues band that’s cool enough to not need a name, were there to avoid the Mardi Bragh atmosphere, if you will, elsewhere. The pair attends Sarah Lawrence College in Bronxville. (Sarah may have been a distant cousin of Captain Lawrence, though we are currently awaiting confirmation on that.) It was actually the first St. Patrick’s Day in the States for Winkelmann, a Brazilian. But she could envision the scene down Manhattan way. 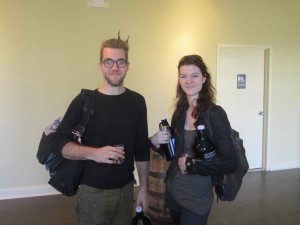 “The St. Patrick’s places will be super crazy,” she said while sipping a Liquid Gold. “You have to be able to get to the bartender as easy as possible, without having to elbow people out of the way.”

Should anyone have needed a bulky fullback to clear a path, there was the substantial frame of Chris Poulopoulos, sampling with his wife Kim and a couple from Albany, Tim Priest and Christine Conboy, the next barrel over. Christine pondered the comedic potential of marrying Tim–“I can tell people I married a Priest”–as she tasted a Family Meal. While the Poulopoulouses (try saying that three times fast after a few samples of Imperial IPA) got a taste of Irish culture at the White Plains parade the week before, Kim was happy to avoid the boozy bacchanal. “I can’t deal with all the drunk people,” she said. “I’d rather come here…where there are classier drunk people.”

Chris liked the fact that, once you fork over two bucks for a sample glass, the tasting is free. Kim rolled her eyes when she heard him utter “free.” “What he spends on growlers, growler cozies, etc.,” she said, as Chris attempted to hide a growler stuffed in a cozy behind the barrel. 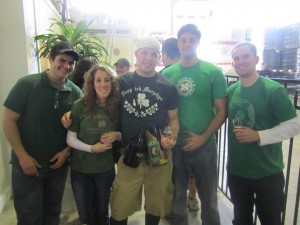 As the clock neared 4, a group of Juniata College (PA) grads wrapped up a tour of the brewery. While they were as decked out in St. Pat’s finery as anyone in the building, they felt that seeing how the Captain Lawrence is made trumped that little parade down on 5th Avenue. “You can see a parade anywhere, anytime,” said Kyle Allen, who lives in Stamford and wore a two-growler bandolier across his torso.

To be fair, the New York City parade has been going on since 1762, or about 225 years before Kyle and his pals were born, and is hardly just any parade. Yet the Juniata four was unimpressed. “You can see a parade on TV,” added Matt Lawton.

Susan Peters did him one better: “You can watch the parade on your phone while taking the tour,” she said to a chorus of laughter.

The laughs don’t come as easily for Rafael Marcial of New Rochelle and Anthony Gonzalez of the Bronx. Both served their country—our country—in Iraq, and listed a number of afflictions, physical and psychological, they brought home, and carry each day. For them, being jostled by a few million revelers isn’t really an option anymore. They find the tasting room’s mellow vibe smoothes the anxiety a bit. “Even a few hours here helps us relax,” said Marcial. 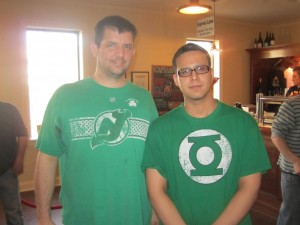 The soldiers tasted the Imperial IPA with a few friends. Gonzalez said he was enjoying the “scenery”–looking over either to the brewing silos, or the attractive women across the room. He sported a green t-shirt and a well earned smile. “I’m Irish for the day,” Gonzalez said.

Scores of people were similarly Irish for the day, but it’s worth noting that one can appreciate Irish lit, Irish wit, and excellent beer, throughout the year.

The author is paid for “Notes” by Captain Lawrence, partially in beer. He can be reached at malone5a@yahoo.com.

The Captain Lawrence tasting room is open for sampling Tuesday-Friday 5-7 p.m. and Saturday 12-6.