Hello again, it’s Sally Veltidi. I am very excited to be a third-year guest blogger for Hudson Valley Restaurant Week. Tonight, my friend, Beth Bricker, and I went to The Barn at Bedford Post, which is located at 954 Old Post Road in Bedford. This is a Relais & Chateaux Property.

When we pulled in, we knew this would be more than a meal, but a dinning experience. We felt like we were in upstate New York or down in the Carolinas. 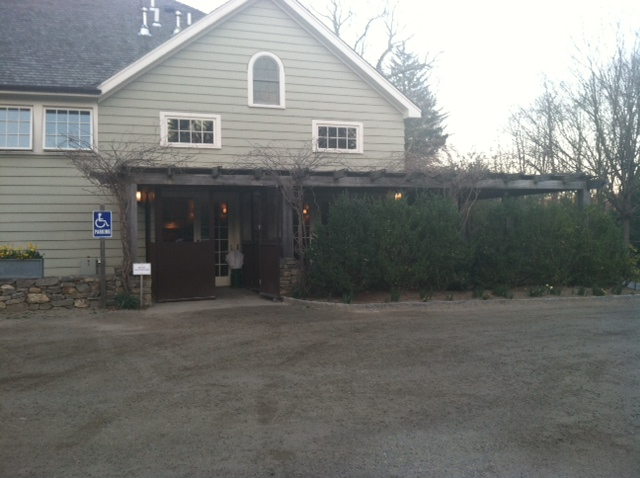 We had already looked up the menu, so we had ideas about what we wanted to get, but we also knew we wanted a glass of wine. On the menu there were three wine options for $10 a glass or $35 per bottle as part of the HVRW specials. I opted for a selection from the special menu of Prosecco, Villa Sandi, Il fresico, Venento NV and Beth ordered a glass of Malbec, Stella Rose, France. 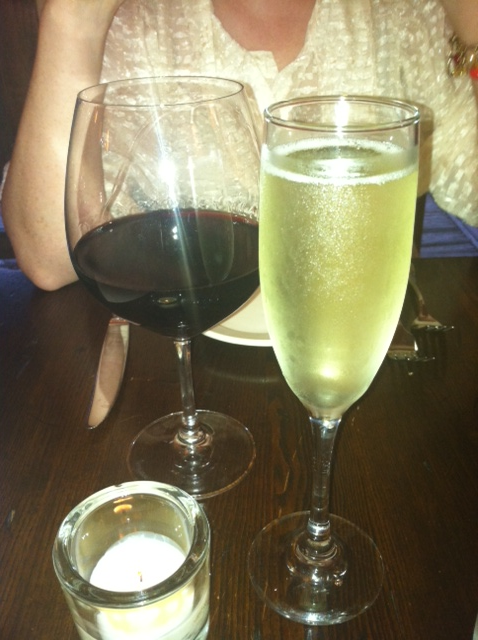 Once we ordered our drinks and then our meals, a waiter brought over some fresh-baked bread. The bread was crunchy on the outside and soft on the inside. The waiter also brought olive oil that we found out was made in Italy and imported specifically for the use of dipping and “eating” not for cooking as other oils are. 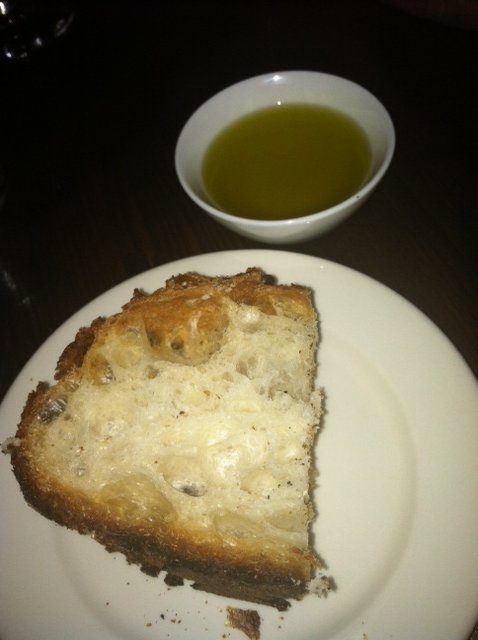 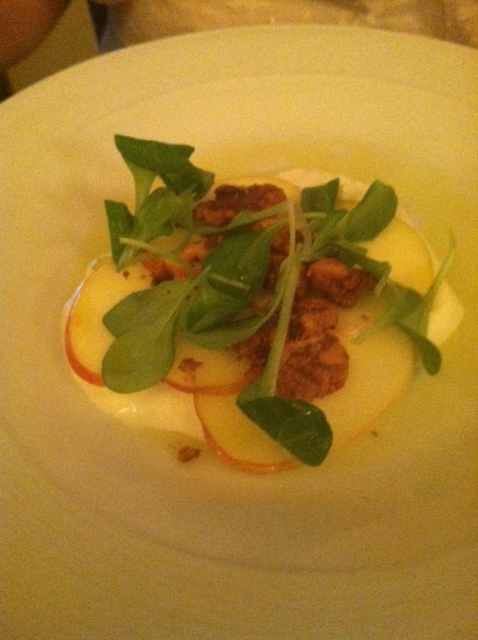 Beth described this as a nice mix of textures and flavors. It was a light dish even though it was cheese, which is often thought of as a heavy food. She also felt that when considered separately, the flavors were OK, but when you ate the components together they were very good. I choose the Bresaola, cured beef loin, arugula, pickled onion, parmigiano. 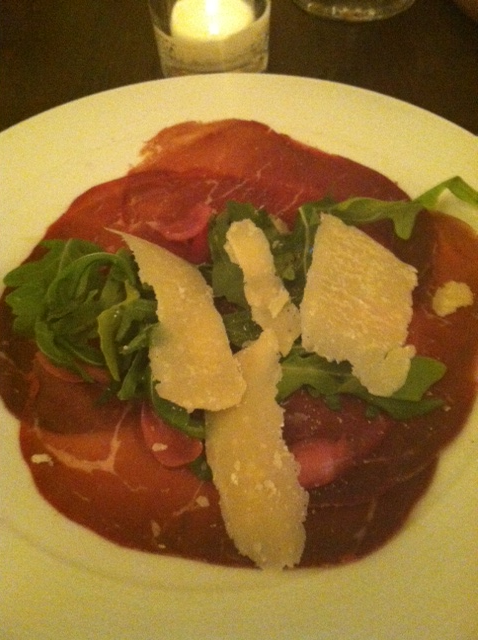 I have to admit that I liked this dish a lot more than I thought I would. I figured I would take a chance and try it, and I was more than surprised how much I liked it. My favorite part was the pickled onions — they added a nice hint of sweet to this saltier, savory start to my meal.

Beth and I were very happy and impressed with the main-course offerings. Traditionally when there is a pre fixe or special menu at a restaurant you will see a chicken and salmon dish, but not here. Yes, there were only three choices for this course, but they were three very unique choices. The one dish we did not get was the Bordetto, mussels, clams, shrimp, tomato and saffron broth.We did see several diners enjoying this dish which looked great. Beth ordered the Cassoulet, duck confit, sausage, barlotti beans. 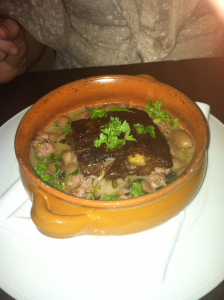 Beth said the duck had a very crispy outside with a tender inside. She felt like the meal tasted like a stew that had not been deconstructed. It was a refreshing dish, that she enjoyed very much. I order the Mushroom Lasagna, spinach, bechamel, ricotta. 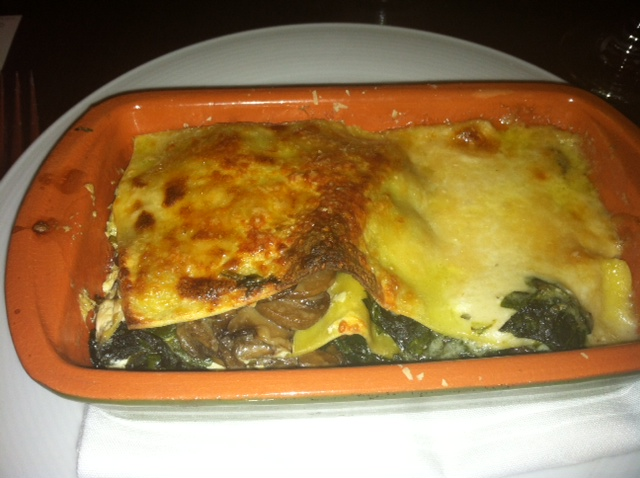 I loved this dish! What I really liked about it was the fact that there were more vegetables than cheese, sauce or noodles. The mushrooms and spinach were perfectly cooked, not under or over cooked. I have several friends who are vegetarians I asked if there were any meat or meat products in this dish and he said no.

We then ordered both desserts to split. First is the Peanut Butter Mouse, chocolate gelato and brittle. 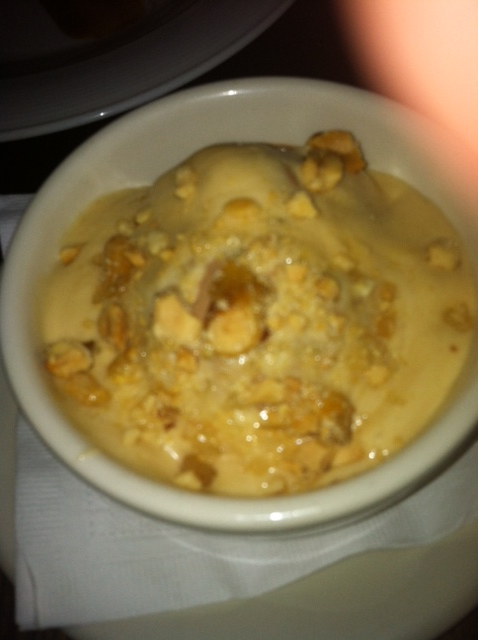 The picture does not do this dessert justice by any means. It had three distinct flavors and consistencies. The peanut butter mousse was light, airy and fluffy, the gelato was rich and smooth and the brittle was crunchy and salty. All three worked together perfectly. 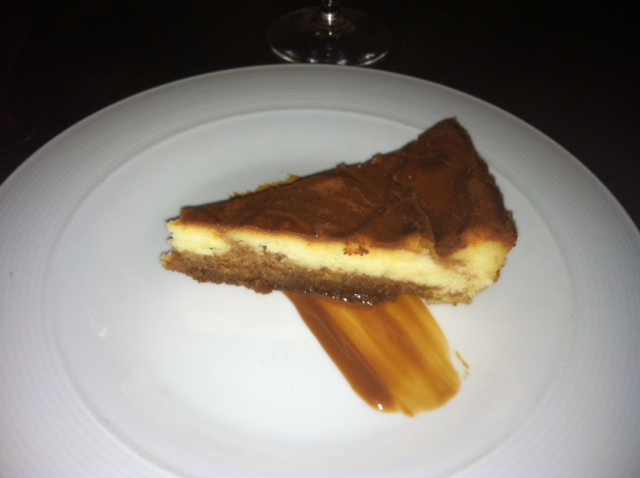 This dessert had a very fresh, homemade taste to it. It did not taste at all processed like the cheesecake we are used to having. Beth said “It is the best cheesecake that she ever had” and I am going to have to agree with her. It was an excellent way to end a wonderful meal.

Throughout the meal the manager, Amar Haouari, stopped by and chatted with the diners. He just checked that everyone was doing OK, and we had everything we needed. We chatted with him a bit about the restaurant and the Inn. He said that they had several regulars at the Barn who enjoyed coming in for Brunch and then back for dinner the same day. Sometimes in the Barn you will see people come for dinner and then stay for a cup of coffee and read a book. It is a very relaxed atmosphere that many people find comforting.

Beth and I told Amar that we drove about 45 minutes to get to The Barn and we felt it was well worth the experience we had. An experience is the best way I can describe the evening. We did not just have a meal, but we had an expereince, and that is exactly what Amar and The Barn’s staff want you to have when you come there. I am looking forward to going back to The Barn again to enjoy another experience.