Hooray it is finally here…Donna Monaco Olsen and Bradley Olsen are off and running (until after they have dined anyway) to HVRW 2012.

Tonight was the first of 7 restaurants that we will visit during this fabulous two week feast and exploration of our local fare. Benjamin Steak House has top notch service and staff by the dozens. Many gentlemen buzzing around each patron to fulfill every need or want. Our night began in the parking area, (of which they are very short on) so only valet.  The attendant was most gracious as I asked to self park due to severe allergies and he obliged (and did not make us park in the next town nor snicker at the request).  Off to a great start. It is amazing how the first contact sets the stage for the night. He is to be commended. 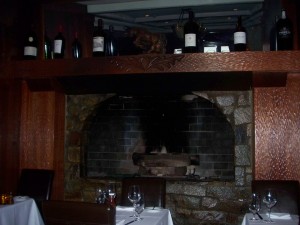 The decor is dark and rich with pressed white table cloths and sparkling glasses and silverware. There is burgundy leather on some of the walls and heavy royal red drapery on large windows. Believe it or not on this fine MARCH evening it was warm enough to have the full length windows/doors open. There is a very large fireplace and mahogany floor to ceiling cabinetry that houses hundreds of bottles of wine.  We were seated at a table for two lined up in a row of many two’s and although early and empty we found ourselves next to another couple. Close enough for me to ask if they had been here on non-HVRW week and if the meals were similar to what you would get on the regular menu. They said it was similar but unlike myself who engages other patrons to talk “foodie” that is where it ended so I am not sure if it is a slimmed down offering or not, it is still generous enough for us to sport a “doggie” bag home but I was curious as the regular menu in true “steak house” fashion is pricey. The HVRW offerings were regular steak house fare except that the sides were included with the entree and not a la carte. 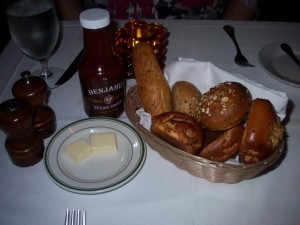 The dinner rolls were not the run of the mill type and reminded me of when I was a little girl going to “The Homestead” with my grandpa. Warm and special, so unfortunately I ate them…delicious! We loved the pepper grinder on the table and when my salad came the waiter still offered to grind. The salad was a wedge of iceberg on a beautiful plate served topped with blue cheese dressing with a bit of a dijon tang, along with itty bitty pieces of tomato and Canadian bacon chunks.  It was a good choice and Bradley decided on the onion soup instead of the third offering of a mesclun salad. Not the best or hottest onion soup but a tasty choice none the less. The gentleman at the next table returned it for being too cool but maybe we were on the early side and the kitchen was not in full force yet. The dining room is vast and filled up with many patrons on a Wednesday night as we dined.  We loved the look of the waiters in bow-ties, crisp white shirts and aprons, standing at the ready, then milling about, waiting on customers. 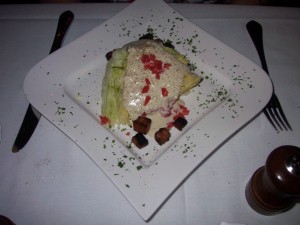 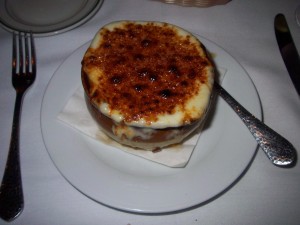 The entrees we chose were the chicken (for the non-beef eater) and the sirloin steak.  The third offering is a salmon filet and all are being served with broccoli and mashed potatoes.  The half chicken was very moist (probably brined), seasoned well and served with its own juices. The steak ordered medium rare was crunchy seared only on one side (curious as we had never seen this before) and nicely spiced. Broccoli was crisply cooked (still green), tasty and salty with the creamiest mashed to accompany. 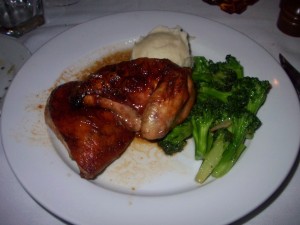 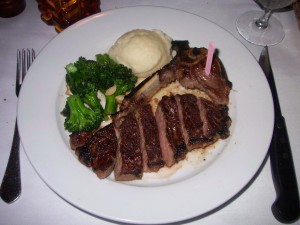 We saw exciting seafood presented beautifully and giant steaks on sizzling platters being delivered to excited patrons. Overall it is fine “steak house” fare but not creative food. even in desserts.  Here are the two choices NY style cheesecake and chocolate mousse cake. 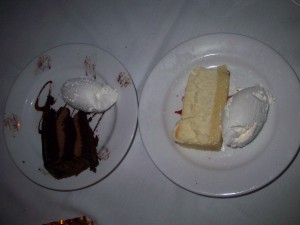 If you are looking for a steak house here in Westchester this is the place to be.  Good service, beautiful surroundings, beef and no parking hassles!

If you have been wanting to see what Benjamin’s is all about go out and give them a try!

The 411 on Benjamin Steakhouse.

On to the next adventure in eating…