Hi, it’s Sally Veltidi…again. Yes, two restaurant reviews in two nights seems like a bit much, but when you are eating excellent food it is a breeze! On Wednesday night I visited I dined at Tarry Lodge with my friend Cristina. Tarry Lodge is located at 18 Mill Street in Port Chester. It is one of the numerous restaurants owned by Mario Batali and Joe Bastianich.

Cristina and I had a reservation and were immediately seated. At 5 p.m. when we arrived the restaurant had a few other diners, but within the hour the place was completely full. Once we were seated we were offered something to drink and bread and oil were brought to the table. 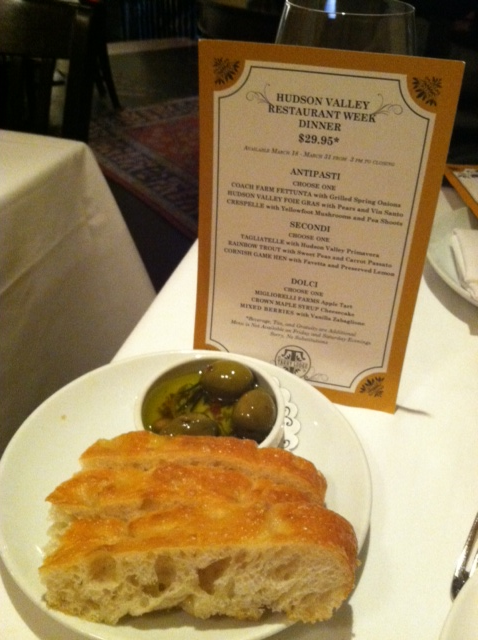 The bread was focaccia and the olive oil had rosemary, chili pepper flakes, fennel and olives in it. The bread and oil were delicious and as Cristina took her second bite of the focaccia she stated “I love Restaurant Week!”

For our first course or Antipasti as it is called at Tarry Lodge, Cristina ordered the Coach Farm Fettunta with Grilled Spring Onions and I ordered the Crespelle with Yellow Foot Mushrooms and Pea Shoots. 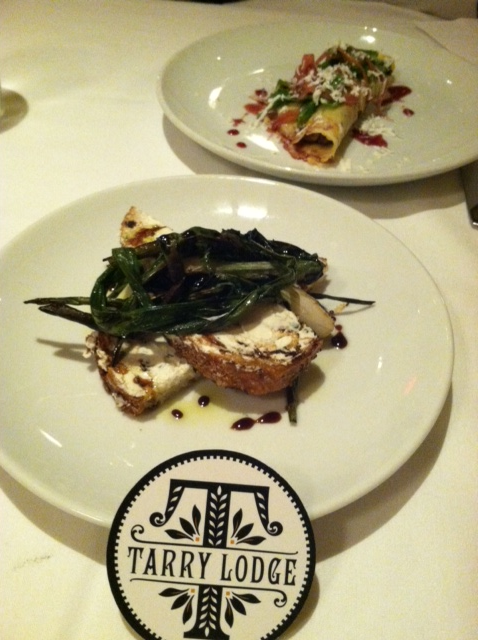 The Fettunta had “Coach Farm Cheese” which was similar to goat cheese spread on the bread. Cristina is not a cheese person and she loved it! The combination of the cheese, crispy bread and onions were very appitizing.  The Crespelle was a light crepe filled with the mushrooms and peas. The crepe was very light and did not overwhelm the dish, but added to it. On the top was a sweet balsamic and pickled onions which may be one of my new favorite things to eat. They added a slight sweetness to the dish.

For the second course or Secondi Cristina had the Tagliatelle with Hudson Valley Primavera. 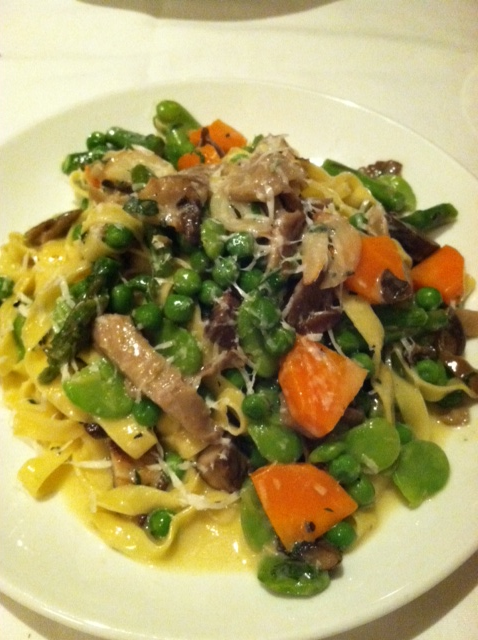 Cristina was thrilled that this dish was mostly vegetables. Each of the vegetables were cooked to perfection, and had their own taste.

I ordered the Rainbow Trout with Sweet Peas and Carrot Passato. 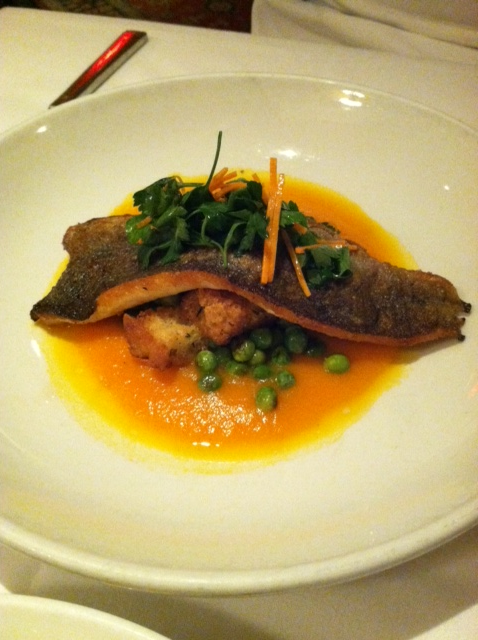 The men in my family are fishermen so I grew up eating fish from a young age. But Wednesday night was the first time I ever ate the skin of a fish. The skin was crispy and cooked with a great flavor. The fish itself was flaky and delicious. The peas still had a crunch to them and not over cooked which I enjoy and the Passato was sweet which finished off the dish nicely. 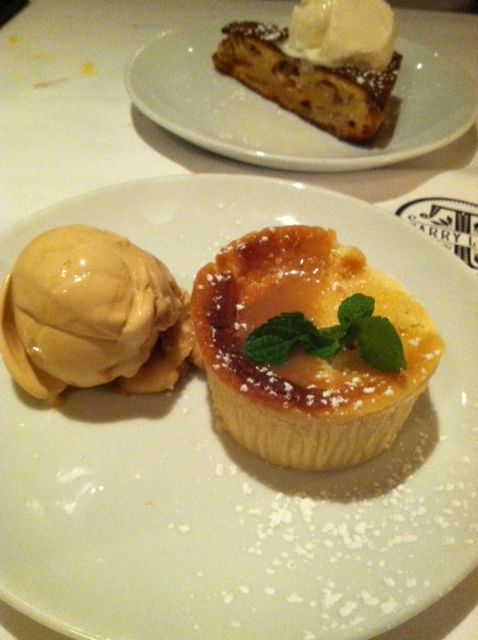 I was immediately impressed that we were served an individual cheesecake. Cristina, who is a wonderful baker and cake/cupcake decorator, knows how hard it is to make individual desserts for a large group. It was great to see this especially during restaurant week. The ice cream also had the syrup taste which was a caramel syrup flavoring. The cheesecake was a nice mix of traditional American and Italian Cheesecakes. The caramel syrup was not overpowering in either the ice cream or cheesecake. Again Cristina is not a cheese or cheesecake person for that matter and she felt this was the “best cheesecake she ever had” (Yes, Beth said the same thing in my last blog, but keep in mind 2 different people, 2 different restaurants. I felt both cheesecakes were excellent as well) 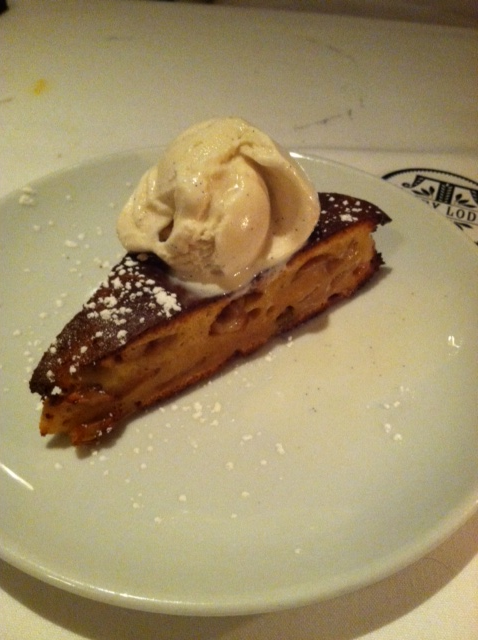 I really like desserts with fruit in them. I especially like when the fruit is not cooked too much, as in apples still having a slight crunch to them as this dessert had. The top of the tart also had a crunch to it, which I enjoyed. The ice cream on top was a Vanilla Bean flavor that wrapped the whole dessert together.

Cristina and I both enjoyed Tarry Lodge and look forward to going there again in the near future. The food, service and atmosphere did not disappoint. Valet parking was available which was a nice bonus to the evening. This was a very stylish restaurant that if you have a chance you should visit.

Cristina had some of her Tagliatelle left over, which she was very happy to bring home, and as she said “You even leave with a doggy bag in style here!” 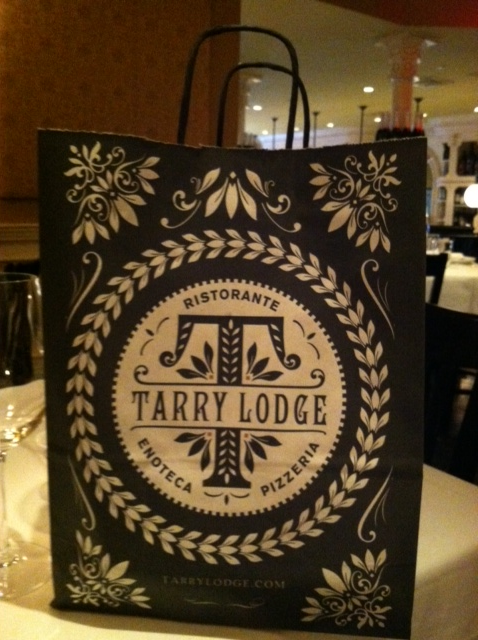