The restaurant is spacious and comfortable, with high ceilings and large windows in the front letting in lots of light.  A guitarist played live music, adding to the fun and relaxed atmosphere. 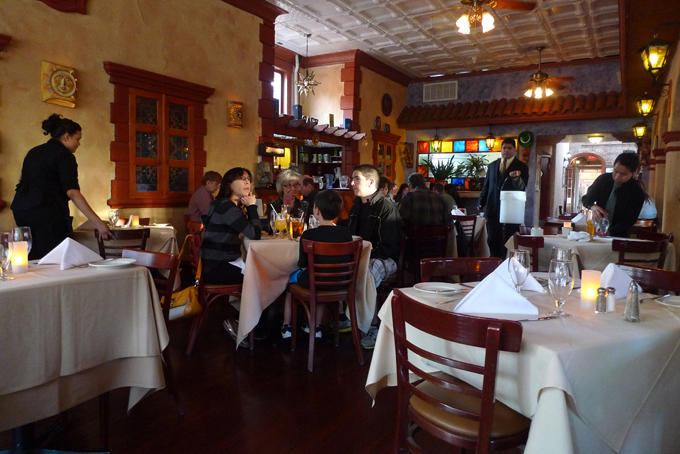 Once we were seated, our waitress brought crayons and a coloring book for my 15-month-old son, which we really appreciated.  We ordered a cheese quesadilla off of the children’s menu for the little guy.  His favorite part was the side of guacamole that he ate with his little plastic spoon. 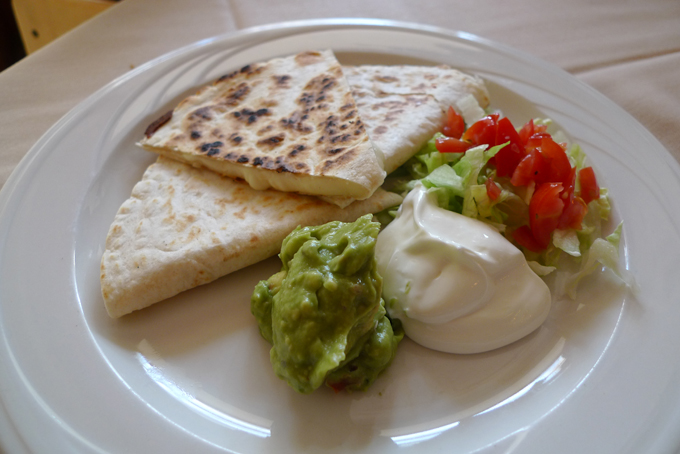 Union offers a selection of wine and beer on their Restaurant Week menu.  My husband and I loved that they were all locally produced and opted to try the Millbrook Cabernet and the Defiant Triple Ale from Defiant Brewing Company in Pearl River.  They were both delicious.  The beer was a large $18 bottle and since my husband drank only one glass, the maitre d’ sealed the bottle so that we could take the rest home with us. 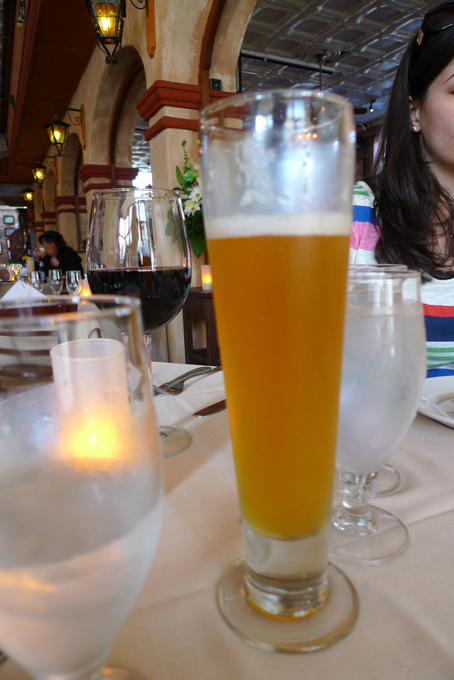 For the appetizer course, we could choose from five options including crispy rock shrimp frito, BBQ pork quesadilla, and pinto bean ravioli.  I ordered the sopa negra, black bean soup with chorizo and pico de gallo.  The flavor of the soup itself was a little strong to me, but combined with the dollop of queso and pico de gallo, it was perfect.  The bits of sausage added some texture to the creamy soup. 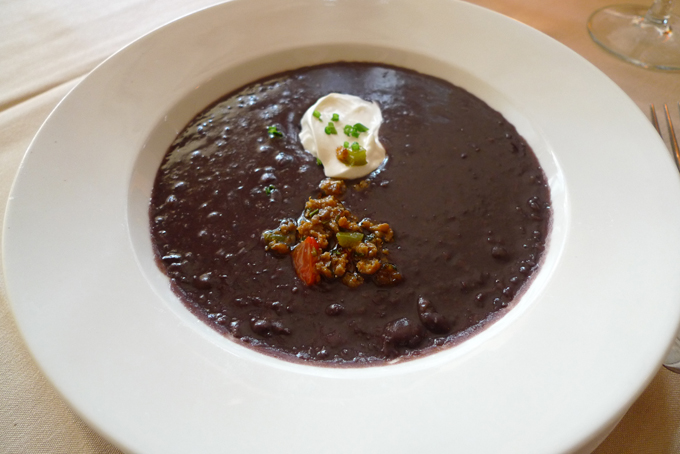 For his starter, my husband tried the smoked salmon salad with watercress, mango, ginger dressing, and sesame seeds tuile.  I made sure to taste this salad and found it to be well-balanced, fresh and flavorful.

There were five entrée options: paella, salmon, ahi tuna, chicken con queso, carne asada, chimichurri braised lamb shank, and cheese tortellini.  I ordered the chicken con queso, which consisted of brie cheese and dates filled in chicken breast, broccoli flower and mushroom jus.  The chicken was moist and was complemented by the strong-flavored cheese.  The creamy mashed potatoes and perfectly seasoned broccoli rounded out this dish. 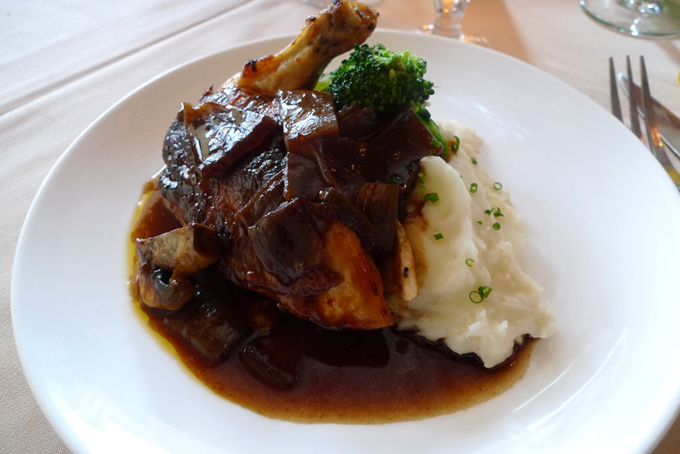 My husband chose the chimichurri braised lamb shank with wild mushroom, barley risotto and vegetables, which he was kind enough to share with me.  The lamb fell right off the bone – no knife necessary – and the barley risotto was hearty but not heavy. 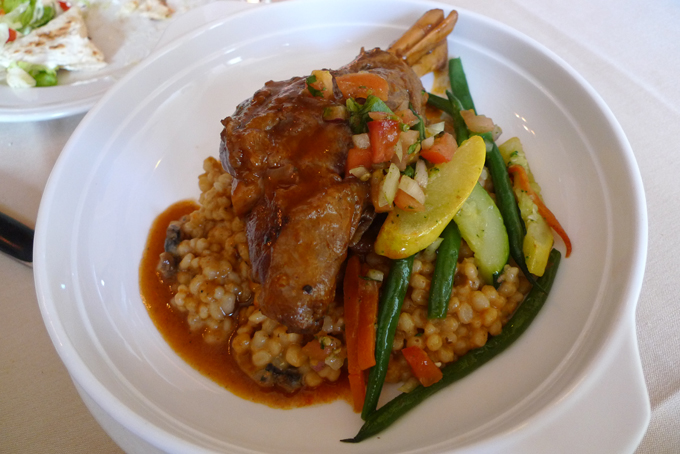 Both of the entrees were delicious and well though-out plates.  My son, who mostly ignored his children’s menu quesadilla, loved the pieces of chicken and lamb that we gave him.

Union offers four dessert options: CaCAO brownie, strawberry parfai, Concklin farm apple fritters, and baked Alaska.  After we finished our entrees, one of my dining companions (I don’t want to point fingers here, but it was the short one) became very cranky.  So we got our brownie and apple fritters to go.

The CaCAO brownie is served with pistachio ice cream and coquito dulce, which the waitress described as a coconut sauce that doesn’t really taste like coconut.  I enjoyed all of the components of this dessert, but the brownie was certainly the star of the show.  Fudgy, chocolatey, with chocolate chunks inside – I’m not gonna lie, I ate the whole thing. 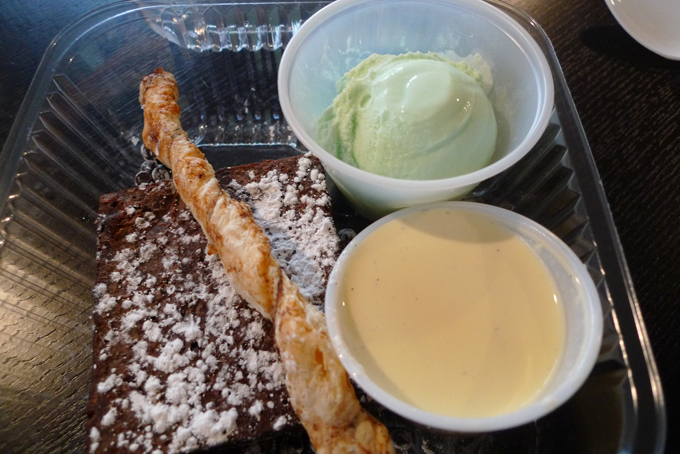 The apple fritters were also fabulous.  Made with Conklin apples and served with Phillip and John honey (from New City, NY), we chose to order them for the same reason that we ordered the Defiant brew and the Millbrook wine: Hudson Valley pride.

Although the apple fritter looked like a donut, it consisted of just a light layer of dough with apple filling.  Together with the caramel-like honey and vanilla ice cream – what a treat! 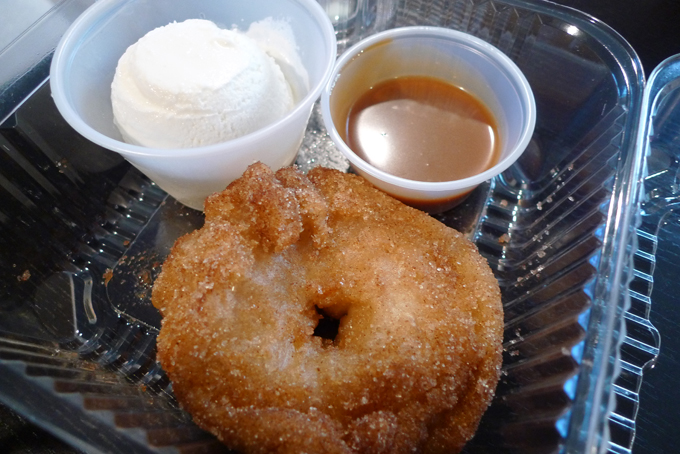 I think it’s clear from this review that I loved Union Restaurant, with its superb service and fantastic food.  It played the perfect host to my family, and seems like it would be a great date night destination.  I can’t wait to go back.