Guest blogger Robin Locker Lacey sharing my first dining experience of Hudson Valley Restaurant Week 2012 with you.  I was very excited to learn a new French bistro, called Le’Express, had recently opened in my neck of the woods and was over the moon to hear they were participating in Restaurant Week!  A perfect excuse for me to try it. 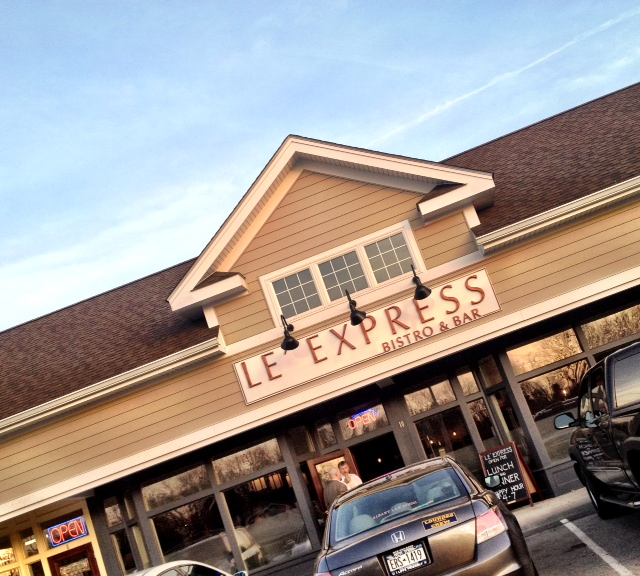 Upon entering the newly redone space, which is a lovely combination of dark and light woods, ivory walls and Morracan light fixtures, it was clear that some sort of business event was taking place. There was a crowd of about 3o people encompassing the bar, with name tags on.  Considering this place is new, and still a bit under the radar, I was very surprised to see a group of this size on a weeknight.  Great for business, maybe not so good for dining acoustics. 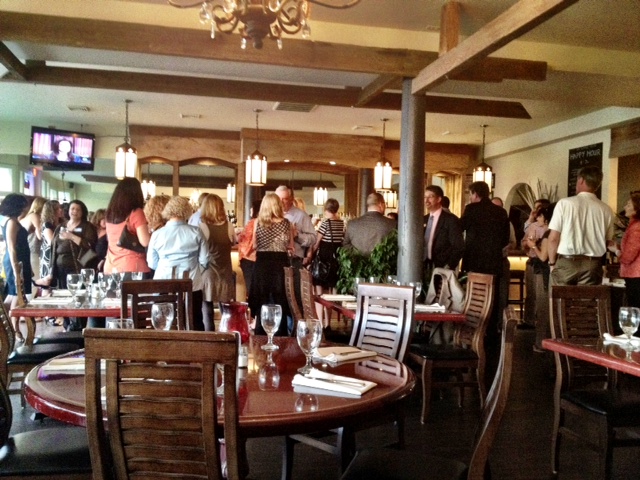 It was immediately apparent that the noise level was uncomfortably loud, so when our friendly host and waiter greeted us, I inquired about dining at a quiet table, perhaps in a separate area in the restaurant, far away from the bar.  Unfortunately, the bar and dining area are in the same room, so that wasn’t an option, but he promised the event would be over and folks would be leaving in about half an hour.

We decided to tough it out and forged on. For the first forty minutes or so, conversation was near impossible and we found ourselves shouting our order to our smiling and apologetic waiter.  But, after the crowd cleared out, things did get much quieter and we were able to enjoy the rest of our dinner in peace.

A tasty dish of green and black olive tapenade in a pool of olive oil was brought to the table with a basket of rolls, which we immediately devoured.

We were given both the regular menu and the HVRW menu to order from. We were very excited to see an unbelievability large selection on the HVRW menu.  Typically, no more than three selections of starter, main and dessert are on offer, but the Le’Express menu was chock full of options – between five and seven per course! 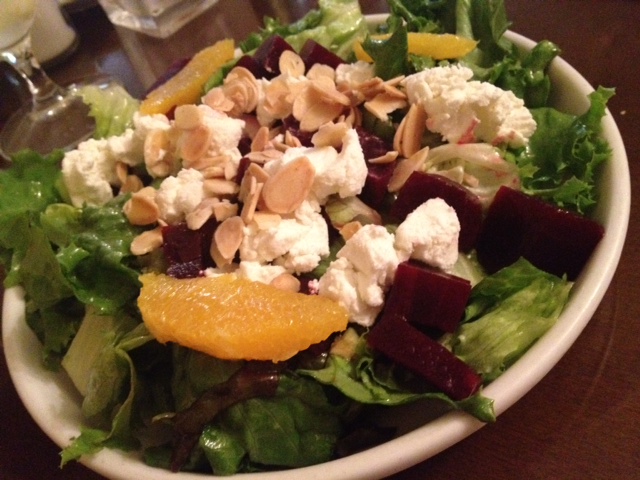 I chose the roasted beet, orange, toasted almond and goat cheese salad, which was a very large portion for an appetizer.  The ingredients were all very fresh, it was dressed well, the flavors mingled together nicely and the creamy dollops of tangy goat cheese melted in my mouth.  It was an instant favorite. 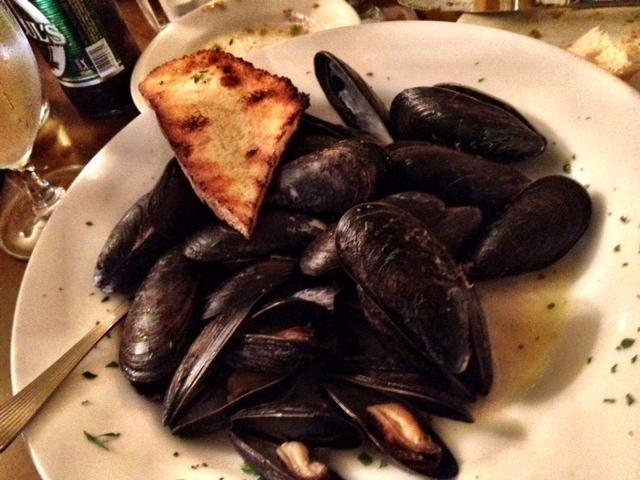 My husband decided on the mussels served in a garlic, white wine and parsley sauce with a side of garlic-rubbed toast.  It was also a very generous portion, the mussels were plump and I can only guess the broth was delicious, because I witnessed him slurping it out of a half-shell, so nary a drop was wasted.

Our other dining companion oohhhhed and aahhhhed over his smoked trout with fresh herbs and confit potatoes, which was served on a thin, crispy baguette slice. We all agreed it was outstanding! 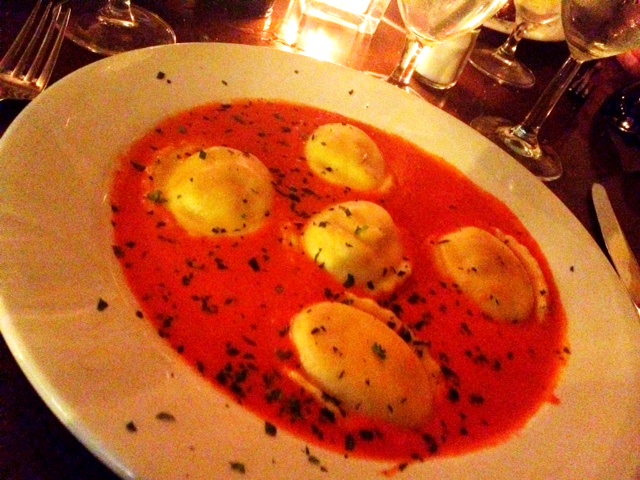 The lobster ravioli were plump, round pillows in a spicy, brandy tomato sauce.  Both the pasta and sauce were tasty, but my husband would have preferred less sauce, allowing the flavor of the lobster and ravioli themselves to come though. 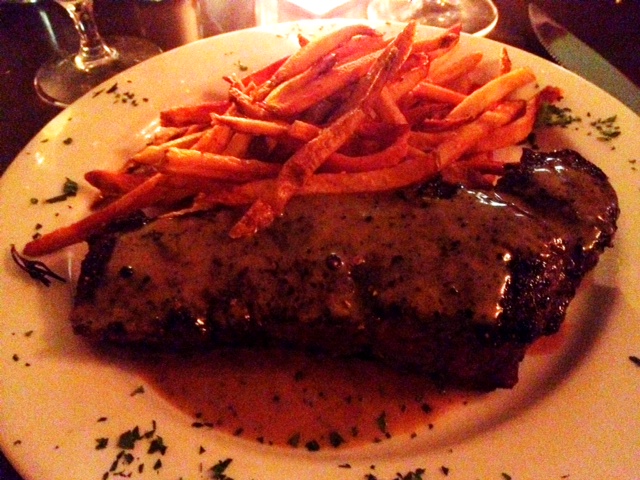 My steak, a generous cut, was cooked rare, exactly how I had ordered it, and covered in a peppery brandy cream sauce.  It was flavorful and definitely had a nice pepper kick, but the meat seemed a bit tough and would have greatly benefitted from more salt. 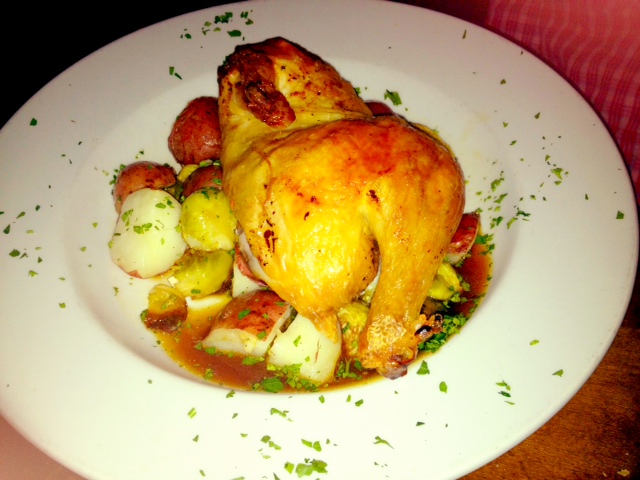 The roasted chicken arrived looking mighty tasty with a golden, crispy crust atop a bed of quartered red potatoes and brussel sprouts in a small puddle of natrual juices.  Though the chicken was just a tad bit dry, the vegetables were fork tender and again the dish could have done with a bit more salt and seasoning.

Between our dinner and dessert, the bright sunlight that had been streaming through large storefront windows waned, the interior lights were dimmed and candles on tables were lit, instantly transforming the atmosphere into something much more romantic, which I rather enjoyed.

We finished up with desserts – chocolate lava cake with vanilla ice cream and crepes stuffed with nutella and topped with raspberry compote.  Both were equally sweet and scrumptious, however as I was eating the crepes, which were served cold, I imagined warming them a bit would have melted the nutella slightly and made the dessert even better.  But the combination of nutella and raspberry was superb. 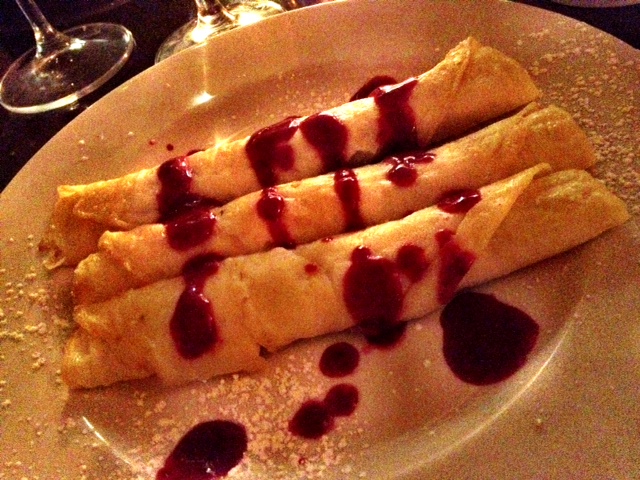 The service was personable and attentive the entire night.  More bread was delivered, water glasses were promptly refilled, inquiries about the food during each course were made, silverware was replaced accordingly and the food was all presented with great care and thought. Overall, we enjoyed our experience here.

I’m looking forward to returning, opting for a late candlelit dinner, after the happy hour crowd has dispersed, the sun has set and the warm ambiance envelopes the place.