I first heard of Alain’s Bistro from a co-worker.  Both of us Rockland residents, we would discuss any new restaurant findings we discovered in the county. None sparked more praise from her than Alain’s Bistro where she dined several times, never disappointed.

So going to Alain’s for the first time I had high expectations. As we approached the restaurant, opening the door for us was none other than Chef Alain Eigenmann himself; we were very impressed.  He continued to show us to our reserved table.

Soaking in the atmosphere for the first time you were transported to a small bistro somewhere in France.  Calm mood lighting, pleasant background music piped in, French décor, made the place cozy and inviting.  Our server for the evening was Jessica, very friendly and attentive, offered us a variety of waters to start.  We declined politely and went straight for the wine, a chardonnay, that was crisp and refreshing.  Assuming the wine was French, I was surprised to learn it was actually a wine from the Hudson Valley, from Millbrook Vineyards, a nice touch to support Hudson Valley Restaurant Week.

We ordered from the Restaurant Week, three course dinner menu. The appetizer I chose was their French onion soup which was outstanding.  The broth and the caramelized onions had a rich flavor and the cheese top was browned and melted perfectly. 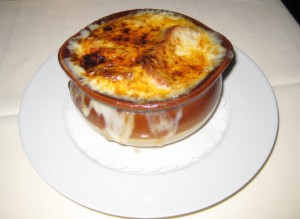 Chris ordered the French martini tartar which came presented in a martini glass garnished with a juicy lime.  The bottom layer was compiled of avocado mousse that was creamy and oh so delightfully rich with flavor.  The second layer was the salmon tartar that had the perfect blend of spices topped with a subtle lime froth. 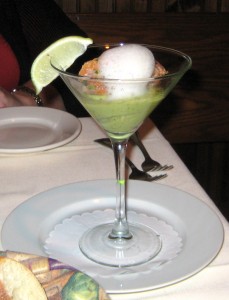 For the main course I tried the Black Angus hanger steak with shallots, red wine sauce, haricot verts and potato puree. The steak was cooked perfectly, just as I ordered it, medium, and topped with fresh parsley, no other seasonings needed.  The potato puree was fluffy and irresistibly rich.  The haricot verts were cooked as I liked, with a slight crunch. 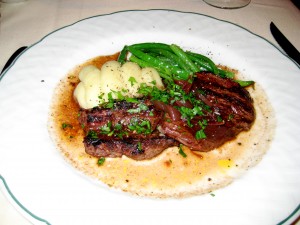 Chris, being a lamb aficionado, ordered the braised lamb shank.  This tender as butter lamb was served over root vegetables in a light, orange rosemary sauce.  The combination of flavors complimented each other. 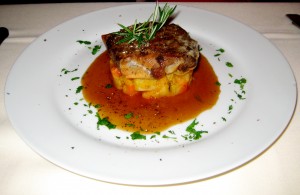 For dessert I tried the Tarte Tatin, an apple tatin with crème fraiche.  I definitely recommend this one.  Chris had the Fraise Melba, vanilla ice cream, strawberries and fresh whipped cream which she enjoyed.  Both desserts were a perfect ending to a perfect dinner. 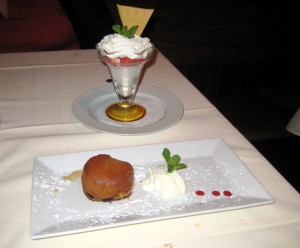 I look forward to many more dining experiences at this wonderful restaurant.