This is my final “vegan and omnivore” post for Hudson Valley Restaurant Week 2012. I’m JL Fields, guest blogger, back with news of a delicious meal at Sweet Grass Grill that pleased both the plant-based diner and the meat-eater.

Saturday night of restaurant week is crazy!  Lots of diners were out and about, looking for great food at a great price.  Sweet Grass Grill was packed and the staff were clearly ready. They moved around the room rapidly with great care and attention.

The server greeted us with a menu and explained, “we keep it simple.” Rather than offer a prix fixe menu, they allow you to choose a starter or salad, an entree, and a dessert and charge the standard restaurant week dinner rate of $29.95. It was liberating! 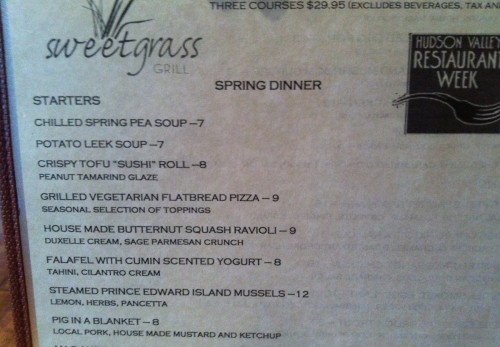 I explained that I was vegan and he immediately walked me through the menu and pointed out the items that were already vegan, as well as those that could easily be made vegan (I ended up choosing the ready-made vegan options).

While we considered the menu our drinks and a bread basket were served. I asked if the bread was vegan. The server asked why it might not be. I explained that some bread recipes use eggs (or egg white is brushed over the bread loaf for shine) or non-fat dry milk powder is used. He returned with chips, because they weren’t sure about the bread. 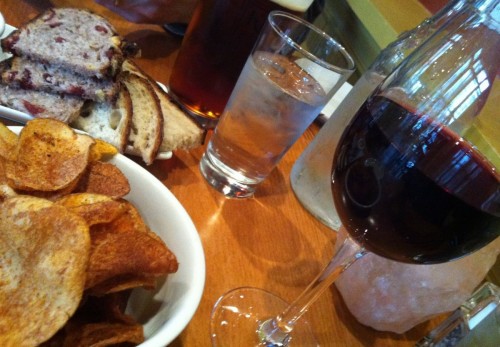 My husband started with the Roasted Beet and Goat Cheese Salad. 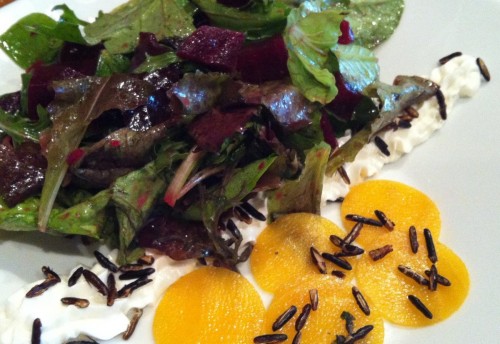 He liked the salad but thought the dressing might have had a bit too much salt (coming from a man who never met a sodium he didn’t like, this means something).  But overall, he enjoyed it very much. 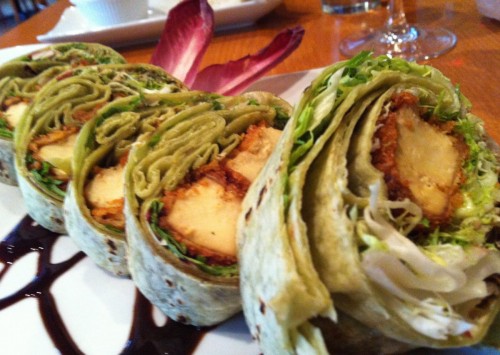 Positively divine!  I am a fan of Asian-infused dishes in general and this did not disappoint.  Hearty enough to serve as a main dish, the roll bites were actually quite light.  I took half home.

My husband went old school and simply ordered a burger. 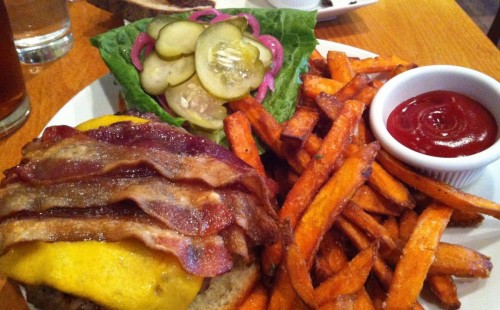 I quote, “This is potentially the best burger I’ve had at a restaurant.”  The Sweet Grass-Fed Burger, with sweet potato fries, was obviously a big hit.

I stayed with the Asian theme and opted for the plant-based Sauteed Spaghetti Squash with local greens, edamame, carrots, ginger and sesame. 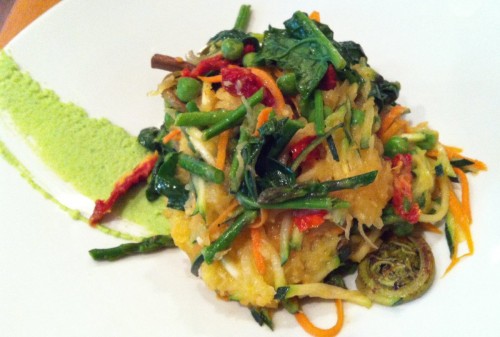 The addition of fiddleheads was both delicious and nutritious!  A light and delightful dish.

The server brought out the dessert menu and described the sweet treats. I immediately asked if they had any sorbet or fruit for a vegan option. My husband said, “Look at the menu.”  Wow, the first offering, the chocolate cake, is vegan! 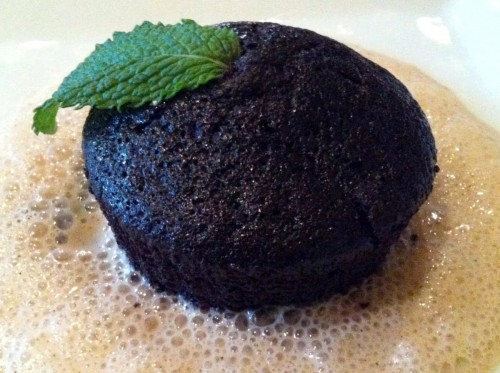 This ultra-moist cake was served with a Cinnamon Creme Anglaise (made with tofu and agar-agar) and it was so delectable that at one point I said to my husband he better watch out because I thought I might have a Meg Ryan/When Harry Met Sally restaurant moment (don’t worry, I kept it together).

My husband was equally, though not as dramatically, pleased with his dessert choice, the Black Forest Bread Pudding. 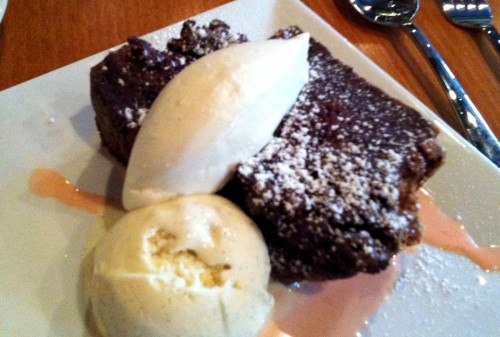 At first bite he said, “It’s pretty good.”  And then? He bit into cherries baked inside!  He said it was like stumbling upon a buried treasure.

We were both very pleased with the entire meal and the excellent service (particularly so, as they were slammed).

I did take a moment to ask our server why Sweet Grass Grill is so vegetarian and vegan-friendly.  He said they simply recognized the changing needs of their clientele who are more frequently vegetarian, vegan, or gluten-free.  They want to offer something for everyone. I mentioned that I read about their Meatless Monday offering on their website:

JOIN US FOR OUR MEATLESS MONDAYS WHEN WE CREATE A SPECIAL TASTING MENU FOR VEGETARIANS (AND ANYONE LEANING THAT WAY). A LA CARTE OPTIONS AND OUR REGULAR MENU ARE ALSO AVAILABLE.

Our server explained that the Sweet Grass Grill’s Meatless Monday menus are motivated by a concern for the environment and the health of their customers.  After our meal my omnivore husband suggested that we make a point to support their efforts and begin dining there on Mondays. Well done, Sweet Grass Grill, well done!

By the way, our server for the evening? His name is Tom and he happens to be the General Manager.  He jumped in to help out on a very busy night.  Well done, Tom, well done!