Hi there!  Briana Costa, guest blogger, here to tell you about the Italian restaurant just around the corner that you need to hear about.  Graziella’s Italian Bistro is literally around the corner from my new home in White Plains, and I had been anxiously awaiting a reason to try it out.  So, my friend Kate and I decided to start the week off right with cocktails and dinner at Graziella’s. 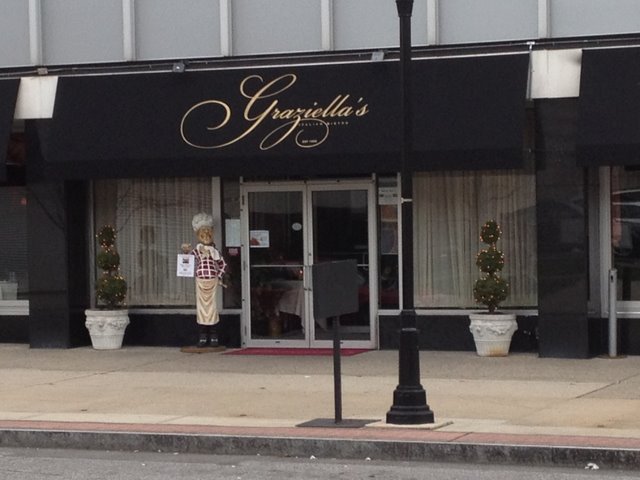 The bar was decently crowded, even on a Monday night, but Kate and I still found a spot at the bar to enjoy some pleasantly chilled glasses of prosecco and complimentary chips – be careful, they’re addictive!! 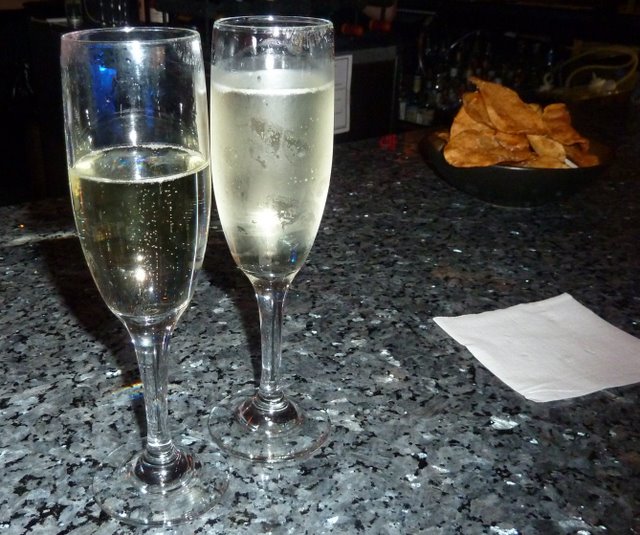 Our hostess was very excited to hear we were there for Restaurant Week and sat us at a table by the large picture windows at the front of the restaurant.  Our meal began, as most do, with complimentary bread being brought to the table.  But instead of the normal side of butter or oil to go with the bread, we were brought a plate of sliced salami and a bowl of diced tomatoes in oil.  The bread was toasted just enough to have the outside crunchy but the inside still soft.  Adding the tomatoes and oil to the bread made me feel as if we were making our own mini bruschetta, and they tasted just as good.

We also ordered some specialty drinks – a French Martini for Kate, which she says was one of the best she’s had in the area, and a drink for me that was concocted by our waiter, Nat, since he saw how much trouble I was having deciding on a drink.  He recommended one that he based on a bellini – champagne, peach schnapps and fresh cut strawberries.  It was a perfect drink for the first week of spring!

For our Starters Course, Kate and I both chose the Baby Arugula Salad with avocado, candied walnuts, fresh mango, goat cheese and a red zinfandel vinaigrette.  I’m a bit on the fence when it comes to arugula – usually I skip it because of the bitter taste – but I couldn’t pass this up when I saw goat cheese and mangoes.  For me, goat cheese and just about any type of fruit is a perfect combination and this salad did not disappoint.

The candied walnuts added a nice texture to the mostly soft elements and the cherry tomatoes (though not listed on the menu) added a fresh acidity to the dish.  The only way this dish could’ve been better was with a bit more goat cheese.  I can understand not wanting to overpower the dish with the potency of it, but towards the end I had run out of goat cheese and was left with more of the bitter arugula taste than anything else.

The Braised Short Ribs Ravioli with authentic veal Bolognese sauce was an easy choice for the Appetizers Course.  It became even easier when our waiter informed us that the pasta is made in-house.  There is nothing quite like homemade pasta. 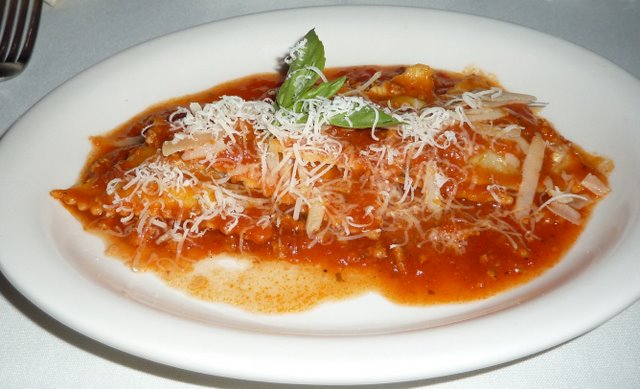 Deliciously amazing is the first description that came to my mind.  With the short rib stuffed into the ravioli and the sauce with little pieces of meat in it, the dish was extremely rich.  I could easily see myself eating an entire plate of these delightful raviolis and forgetting the rest of the meal.  However, there was just enough of the pasta to satisfy you, but not ruin your appetite.  The basil was a nice fresh addition to the heaviness of the dish – and according to Kate, the basil is what made the dish.

The Entrees Course was a bit more difficult to choose between, but in the end I decided on the Pork Ossobucco with mushroom risotto and roasted Brussels sprouts.  As my dish made its way to our table, I realized that I had not understood what pork ossobucco was.  I had seen mushroom risotto and decided to get whatever entrée that came with it.  Boy was I in for a surprise.  The pork shank looked like it came from a dinosaur – it was almost comical in size. 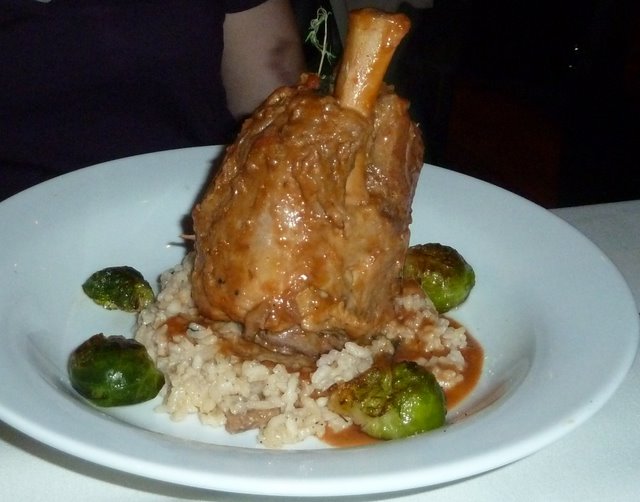 I was given a steak knife, but barely needed it as one touch of the bone had the meat falling off into tender pieces.  The mushroom risotto was perfectly cooked, with just the right amount of mushrooms and creaminess, and mixed very nicely with the pork.  The Brussels sprouts added a nice splash of green to the beige plate, but also added a nice break from the overall heaviness of the dish.  As I felt myself being weighed down by the pork and risotto, I would take a bite of Brussels sprout to even it out.  Even better about this dish, you will definitely have some leftover to take home, and it heats up just as well the next day!

Kate went with the Salmon Siciliano with asparagus, artichoke, oven dried cherry tomato, capers and white wine.  The vegetables were all extremely fresh and the salmon perfectly cooked.  The capers added a nice hint of saltiness to each bite.  This was definitely a lighter dish choice than the pork ossobucco but just as good. 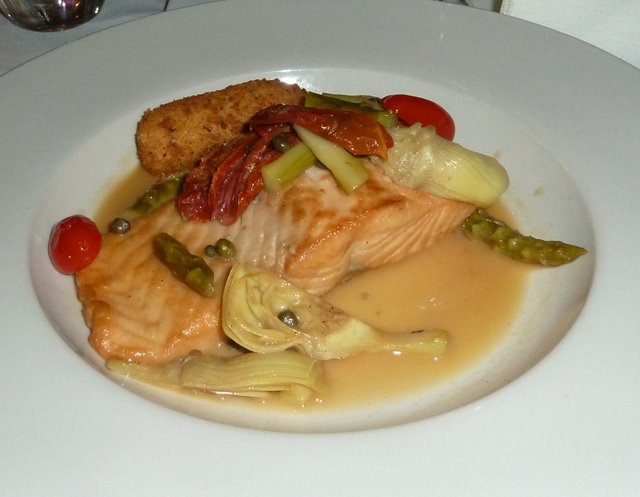 After all of this amazing food, Kate and I were not sure how we would be able to fit in a Dessert Course, but for the sake of experiencing all that Graziella’s had to offer for Restaurant Week we tried to power through.  I chose the Warm Banana Bread Pudding while Kate got the Wild Berry Napoleon. 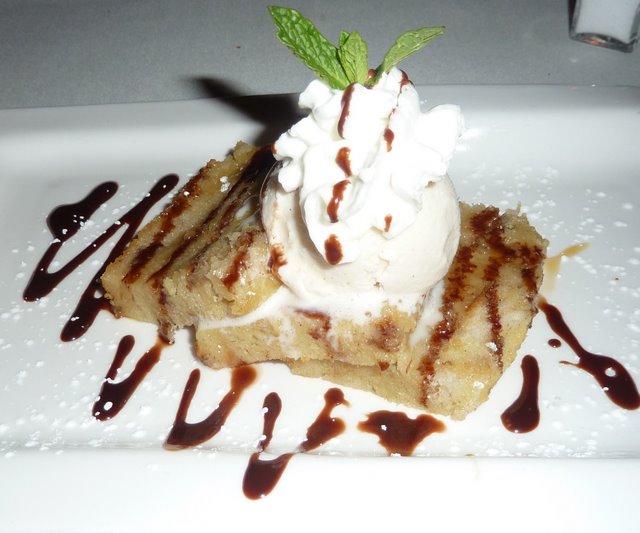 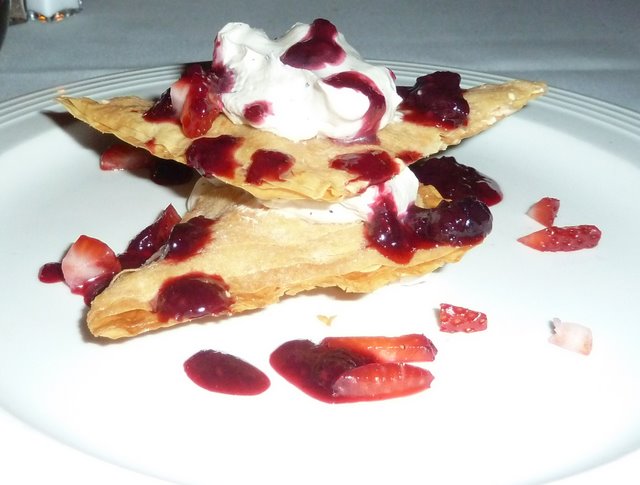 The first bite of my banana bread pudding immediately reminded me of French toast with bananas.  Think of French toast that’s been drenched in a sweet banana custard and then topped with chocolate. Yum. Usually I push the whipped cream and ice-cream to the side of my dish, but not this time. There was a small enough scoop of vanilla ice cream to not overpower the dish, and it tasted like they made their own ice cream and whipped cream – very fresh and light.

The berry Napoleon had whipped cream and fresh berries in between flaky fillo dough.  The fillo dough added an unexpected crunch to the dish – nice, light dessert. Does anyone else see a theme in the choices Kate made versus me?  Why am I always drawn to the heavier, delicious dishes?

Throughout the meal we were visited by our waiter, our hostess and another member of the wait staff to make sure we were enjoying our meal.  Although this constant checking in can sometimes be a bit of overkill, they handled it well – flitting over to our table as something was being brought over or taken away, quickly asking how we are and, hearing we were fine, flowing into the background again.  Kate was extremely impressed with the fact that the wait staff replaced all of our silverware in between every course – that’s a lot of silverware for four courses!  All in all, the staff seemed friendly and genuinely interested in creating a relationship with its patrons.  Graziella’s is definitely a nice restaurant to have right around the corner and I am really looking forward to going back to try the rest of their menu!