Guest blogger Elissa Fisher here to tell you about my experience at Le Jardin du Roi. My dining companion, who happens to be my daughter, Mia, and I had a 6:00 reservation.  We walked through a lovely patio, which, in the warmer months ahead, will make for some pleasant al fresco dining in a garden setting. Umbrellas were at the ready, and  some hints of Spring were already present in the  outdoor urns and window boxes, which were planted with daffodils and other flora.  We walked into the restaurant, and were greeted warmly by Joe Quartararo, one of the owners.  We were seated immediately in a comfortable booth by a large window. 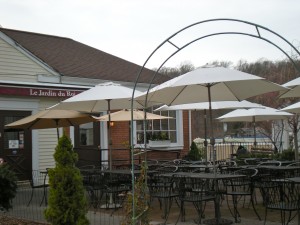 Antonio, our waiter, appeared and we were offered water and drinks.  A basket containing individual baguette style rolls was accompanied by a small plate of  butter.  I ordered a Kettle One martini with olives and Mia requested a glass of prosecco.  Service was prompt and friendly, and remained so for the duration of our meal. We requested the HVRW menu, but also took a look at the extensive regular menu, which includes traditional French fare such as omelettes and moules frittes, as well as other dishes such as salads, burgers and pastas, along with daily specials.

We settled down in our comfortable surroundings and took in the atmosphere.  The  cozy  leather banquettes, tin ceiling scattered with ceiling fans, dark wooden tables aglow with votive candles, and wrought iron sconces on the walls created a warm and intimate ambience.  Both fresh cut and potted flowers, along with simple decorations on the windowsills, added to the charm of this little bistro.  The cream-colored walls were adorned with photographs of seasonal outdoor scenes by a local photographer, Joanna Cirasella.  A contemporary mix of music played at just the right volume in the background, and that, along with the unobtrusive chatter of other patrons, made table conversation easy.  A small, well-stocked bar that seats five took up one area of the restaurant. Before we knew it, the tables were full. 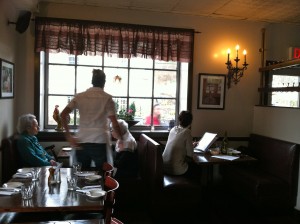 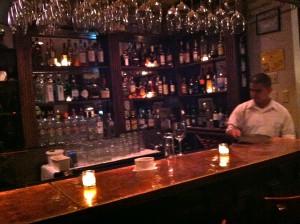 The HVRW dinner menu had something for everyone-carnivores and vegetarians alike.  The appetizer consisted of a choice of French onion soup, smoked bbq ribs, fish tacos, or beet salad.  I ordered the fish tacos-Cajun rubbed sole, cucumber citrus salsa, and baby greens rolled in a black bean wrap, with spicy mayo on the side.  The sole was fresh and moist, with a bit of a kick from the rub.  The spicy mayo was a thoughtful accompaniment to add more heat if desired.  Delicious! 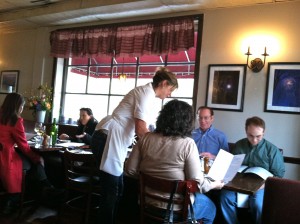 Mia ordered the beet salad, which couldn’t be beat as far as taste goes!  Diced beets were tossed with olive oil, shallots, and ginger, then topped with crumbled goat cheese. Endive was served along side, making the presentation a beautiful pinwheel of color.  The ginger flavor came through, and a touch of Dijon mustard added a little pizazz.

Joe surprised us with a taste of the bbq ribs, which were created by restaurant partner Christiaan Lorson, who competes in bbq contests as a hobby. (He just won a championship in Brooklyn.)  The  Kansas City style pork ribs were smoked for seven hours, and glistened with a sweet and spicy glaze. Amazing!  The pork was succulent and tender enough to easily bite off the bone, yet firm enough to leave the unbitten meat on the bone for the next delectable mouthful.  The pillow of moist jalapeno cornbread was the perfect side.

Dinner entrees were comprised of sliced shell steak served over mushroom risotto, grilled asparagus, and a balsamic reduction; grilled vegetables over quinoa; roasted sole topped with citrus accented onions and tomatoes, served with saffron rice and zucchini; and oven roasted half chicken, served with mashed potatoes, sauteed broccoli, and finished with an herb jus on the side.

I chose the sole, which was sweet and perfectly cooked. The coral-colored citrus accented onions and tomatoes created a gem of a sauce that glistened on top of the fish.  It was a fine balance of flavors, bright with lemon and a little tart, with a touch of fresh orange juice to curb the acidity.  Saffron rice, which was tender and almost melted in my mouth, along with fresh, gently seasoned zucchini, rounded out the meal.

My daughter settled on the shell steak, ordered medium.  She loved the balsamic fig reduction, mentioning that the figs brought a sweet note to the balsamic vinegar.  The steak was cooked just as she had asked.  She stated that the asparagus had a delicious grilled taste.  The mushroom risotto was creamy and chock-full of mushrooms, but could have used a bit more salt.

Now, on to dessert!  We opted out of the creme brulee, and I chose apple cinnamon bread pudding, which was amazingly light,moist and flavorful, the apples and cinnamon a comforting choice for this comfort food. Blueberries dotted the dish,which was floating in a puddle of creme anglaise.  Mia had a homemade brownie with vanilla ice cream.  She enjoyed the soft, chewy brownie with its bit of flaky crust, and the caramel sauce added just the right touch to this dessert.  Our meal ended with  an expertly executed  macchiato (espresso topped with a foam of steamed milk) and a Sambuca. 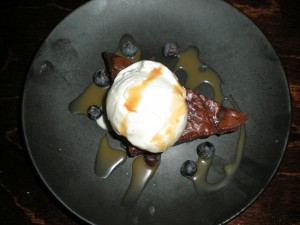 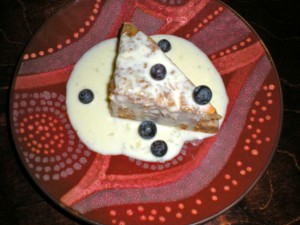 Le Jardin du Roi is open for breakfast, lunch, and dinner seven days a week.  Chef Rudy Beltran-Prats is adept at creating traditional French bistro fare, as well as adding other influences to his menu.  A bbq catering menu is also available.  Parking is on the street or in the large lot in the  back.  It is also an easy walk from the MetroNorth station in Chappaqua.  Bon appetit! 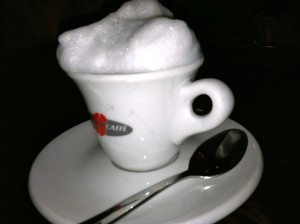 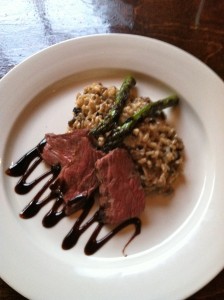 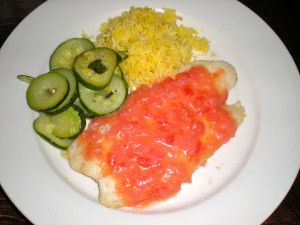 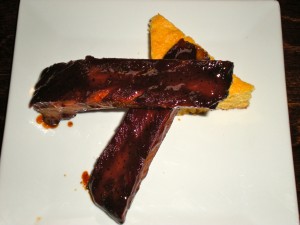 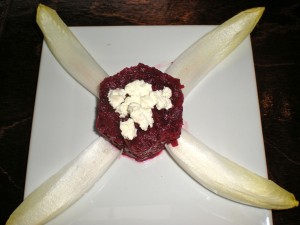 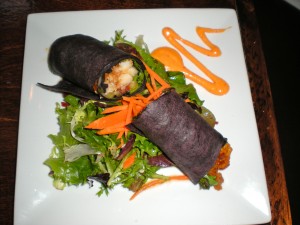 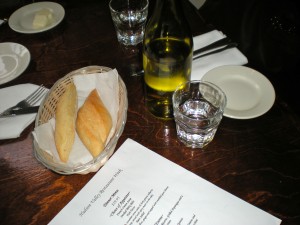 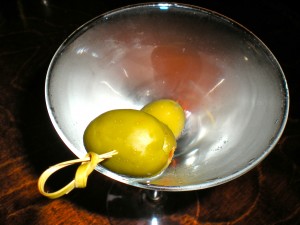