I’m really glad that I’m usually in “try everything new that opens once” mode when it comes to restaurants in the Yorktown/Mahopac area. Otherwise, I might have missed this gem of a Latin restaurant, which doesn’t look like much from the street. But Ramiro’s is actually a beautiful space, with a bright modern bar and seating downstairs, and a party space/art gallery upstairs that features the work of both local pro artists and of local kids and students. 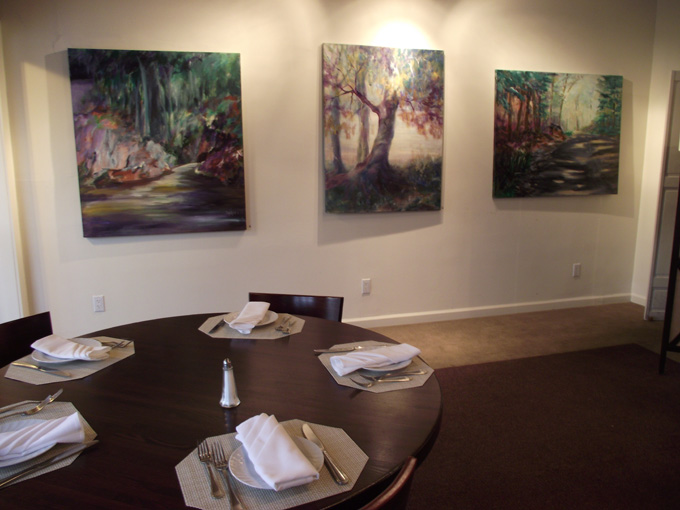 I brought my husband and my foodie (“Yes, Mom, I can eat three courses, get that kids’ menu out of here”) eight-year old out for a Sunday night treat, so we were able to taste the majority of the Restaurant Week menu. After starting with rustic rolls served with whipped butter and melty roasted garlic cloves, we went on to appetizers.

A serving of two empanadas de picadillo were flaky and crispy, with a sweet, oniony beef filling a little less sweet than this dish is sometimes made. The sweetness came instead from a chipotle cream sauce drizzled on top, neatly enough that these could still be finger food if you wanted. 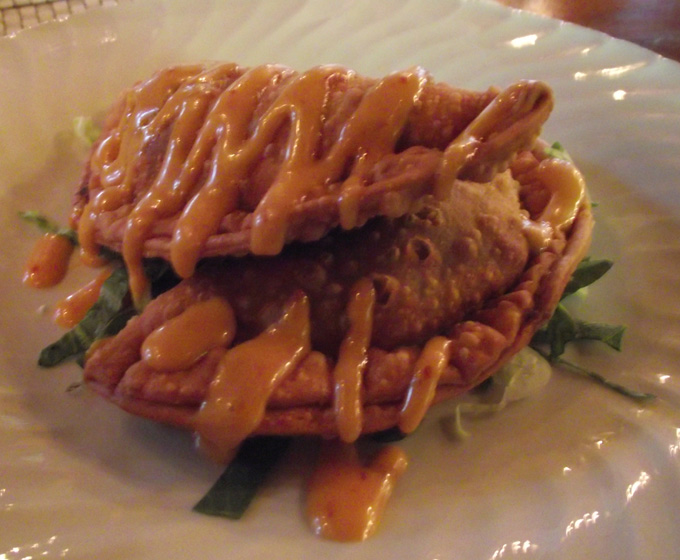 Sopa de elote was a corn soup with a mushroomy background, almost reminiscent of huitlacoche without the funky aftertaste. I found the texture of the corn skin distracting in the otherwise thin soup, but the fresh flavor was just right. 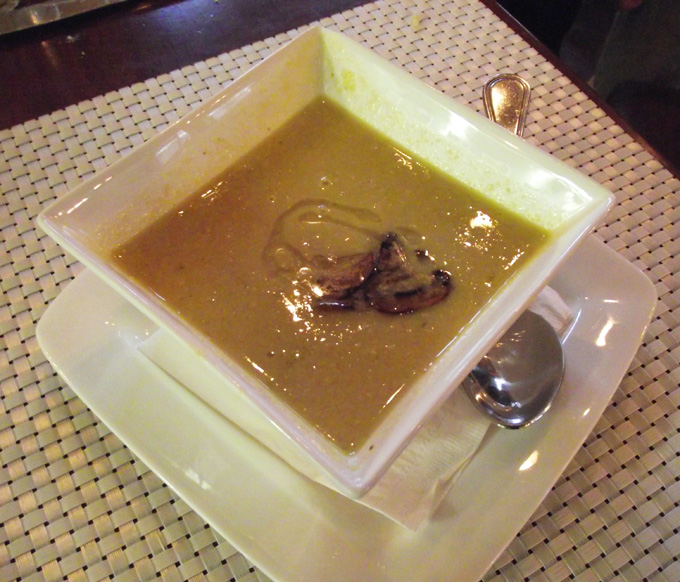 But my favorite is the platano relleno, a savory and festive “banana split” stuffed with pull-apart smoked chicken, black beans, and white queso, with white and green drizzles of sauce offsetting the bright yellows and oranges. 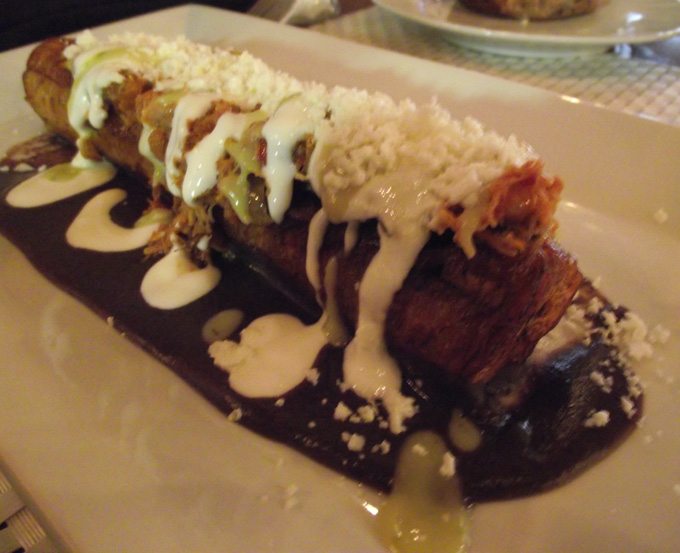 We tried three of the four entrees on the menu.  All the dishes had some heat to them, but nothing was fiery or unbalanced.

Arroz con pollo was done as a rich and creamy yellow rice with peas, topped with grilled chicken breast and leg and bright spears of asparagus, and surrounded by a yellow saffron cream sauce that added a lot of extra flavor. 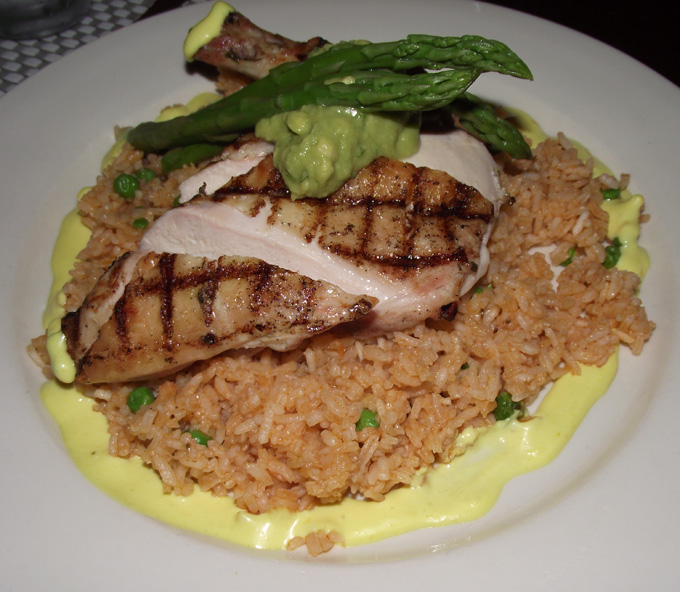 The tilapia had a crispy seared top and a pepper and horseradish cream sauce to offset the mild fish, but the standout on the plate was a chewy molded portion of chunky crisped yucca layered with spinach.

Churrasco a la parilla was nicely grilled and served over an oily, spicy pepper sauce which soaked into the meat, and was topped with small whole green beans and onions with a touch of hot herb and pepper gremolata. 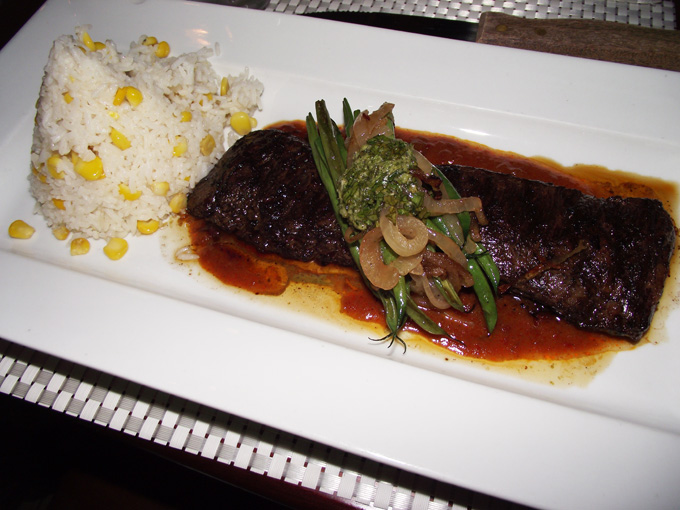 Desserts were understated after the complexity and visual brightness of the first two courses, but were well executed and not overly sweet: a classic vanilla flan, an individual flourless chocolate cake served warm but without a liquid center, matched with a bit of vanilla ice cream, and a cylindrically molded tres leches cake made interesting by the addition of pieces of mango and passion fruit syrup. 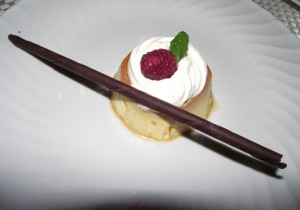 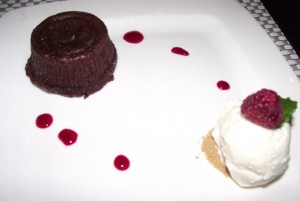 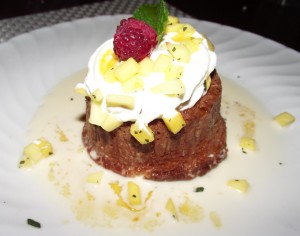 All of these items appear on Ramiro’s regular menu, and we’ll definitely be back to this surprisingly multicultural oasis in our area to enjoy them again.