I don’t think could have picked a better night for my restaurant week dinner – with temps in the high 60s, just about everyone was out and about in Rye last night, and many of them at Ruby’s! Not that I could blame them, the lure of fresh oysters and a chilled white wine is hard to resist.

Hi everyone, my name is Kristina Massari, and this is my third year blogging for Small Bites during HVRW. An old pal and I enjoyed dinner at Ruby’s last night and the bustling crowd at this adorable bistro in the heart of Rye was the first sign we had picked a good spot. Not to mention, Ruby’s is part of the Pearl Restaurant Group which owns local notables, Morgan’s Fish House and Rye Grill & Bar, among others.

As its name would imply, Ruby’s has an old world French flair with beautifully coffered ceilings and dark wood walls, accented by deep red leather furniture with exposed nail heads. Vintage posters of L’Instant Tattinger dot the walls and red-shaded chandeliers give it slightly dark, Moulin Rouge feel. For a second it feels like we could be dinning on baguettes and fromage in the shadow of the Eiffel Tower!

The restaurant also accommodates some limited outdoor dining toward the front with windows that slide up allowing tables to spill out onto the sidewalk, ala many NYC restaurants. 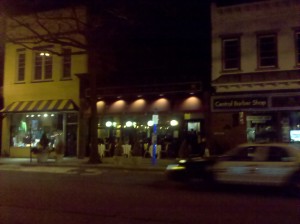 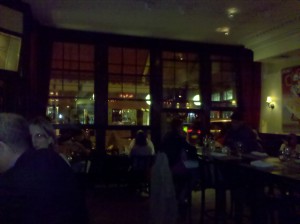 I loved the ambiance of Ruby’s. It was casual but chic. Though the food is important, yes, I feel the mood and atmosphere play an equally important role in the overall experience. That said, our food was just as excellent.

I kicked off my meal with a perfectly chilled glass of Vicolo delle Venezie Pinot Grigio and an order of the pan-fried oysters (how could I not?) with a champagne butter sauce. One thing I missed was a well-appointed martini list, but the expansive wine and beer list definitely makes up for it. 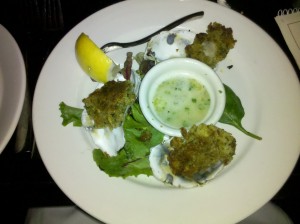 The presentation was lovely (comes with three medium sized oysters) and the champagne-to-butter ratio in the sauce was perfect. It had balance and a nice frothy feel so that you didn’t feel like a stick of butter was coating your mouth. Personally, I probably could have had a dozen of the oysters and called that my meal!

For my entrée, I went with gnocchi and jumbo shrimp in a truffle cream sauce, speckled with some haricot verts and parsley. Though I have yet to find anyone that can top my grandmother’s homemade gnocchi, this came pretty close! The secret ingredient? Chopped mushroom inside the gnocchi. Something I haven’t seen before and it was an interesting (and tasty!) way to take some of the heaviness out of the dish. The jumbo shrimp combination also served to lighten the meal. They didn’t skimp on the truffle oil either, but it ever so slightly overwhelmed any other flavors in the cream sauce. 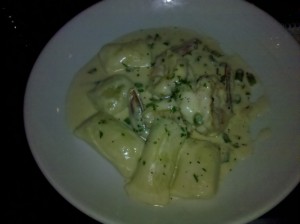 My friend chose the herb crusted cod with bacon and horseradish crème fraiche, parsely roasted potatoes and broccolini. The fish had a crisp, flakey crust and was cooked to perfection. She enjoyed the creamy sauce on the fish (though there wasn’t much bacon) and only wished she had more of it to go around than the smear across the top. 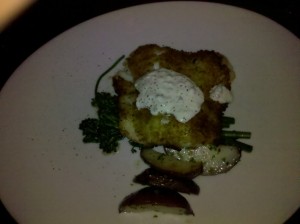 Some of the other entrée options on the list for Restaurant Week include cioppino with shrimp, clams, mussels and the fish of the day and sautéed claves liver with bacon, onion, haricot verts and mashed potatoes.

Another important element to note, was our knowledgeable and friendly waiter who even offered to combine desserts for my friend when she couldn’t decide between the ice cream dessert (they had some yummy flavor options like coffee chunk) and the brownie sundae. The solution? A scoop of coffee chunk on the brownie sundae of course! It was also adorned with some lovely vanilla and chocolate and pudding (check out the artwork below), whipped cream and a thin chocolate slice. 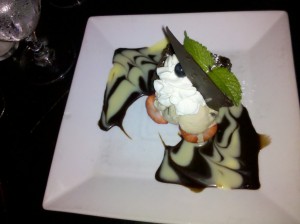 For dessert, I landed somewhere in the middle with the NY style cheese cake. It was spongy and very sweet, served with a dollop of fresh whipped cream, strawberries, a strawberry sauce and a light chocolate drizzle. The chocolate was a nice contrast to the super sweetness of the dish. The cake crust was excellent and also sweet, with a hint of honey holding it together. Overall, all of our dishes came out fast, maybe a bit too fast, as I felt stuffed after the meal. Though my friend and I were so wrapped up in our conversation most of the time, we probably took longer to order each course than most diners. (Which proves sometimes the best dinner pairing is good conversation and a great friend.) 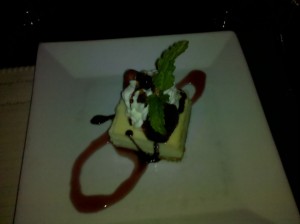 All in all, it was a great gastronomic experience and I was hard-pressed to find to find anything to critique (I mean too much truffle oil, come on!). This was definitely one of my favorite restaurant week experiences and I look forward to coming back again for those oysters.