Todd Matthews, guest blogger, reporting in on Turkish Meze Restaurant in Marmoneck. This quaint find is quite unassuming at first glance. When looking from the outside, one is not quite sure what to expect in terms of formality. The building appears to have been around for quite a long time, yet the bright blue awnings have brought a kick of life to it. 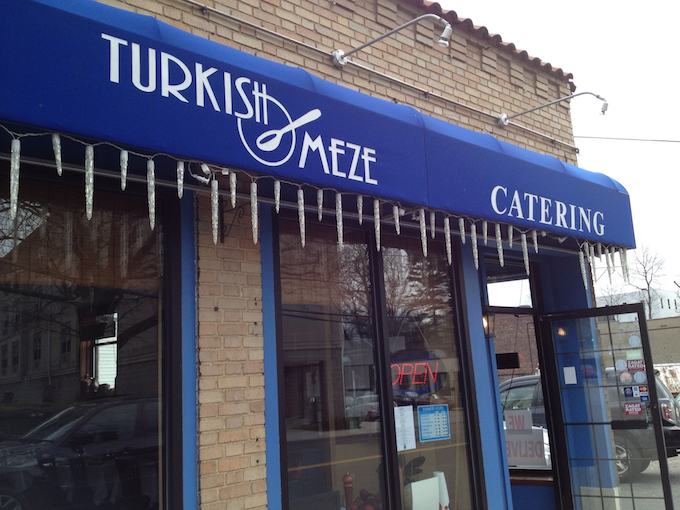 As it turns out, this restaurant is easy-going and quite casual. It is a small restaurant. The décor is warming with walls of sun-kissed muted yellow. Turkish artifacts and art adorn these walls. It appears that when full, this restaurant could accommodate about 75 patrons. 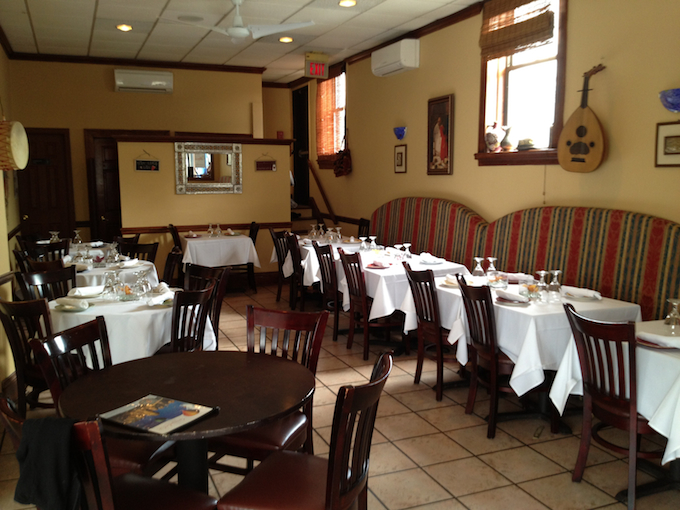 We were met with a smile and seated promptly and given a seat next to the window, which provided some natural light and some warmth. Music playing is modern Turkish. One song playing was from Turkish pop star Rafet El Roman, lending to the casual mood of the place.

Water was poured promptly, and we were presented with a plate covered by cloth under which was Turkish flat bread containing sunflower seeds, nicely warmed and caramelized. The bread was paired with an earthy tapenade. 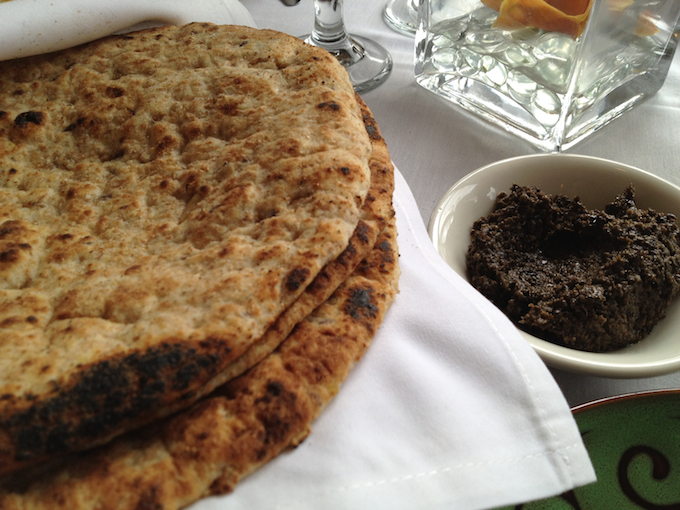 There was initial confusion when we were presented at lunch with the Hudson Valley Restaurant Week dinner menu. We asked for the lunch menu; but they clarified that because they normally serve a lunch special, this was our offering or we could order from the standard menu. Although friendly, the server seemed perplexed that we questioned it. We decided to just be flexible and go with it.

For the soup and salad option, we ordered the Turkish red lentils cooked with vegetables and herbs. The soup was full of finely minced herbs and was earthy in nature. Although tasty as is, a squeeze of the accompanying lemon was enough to brighten it up and bring it into balance. 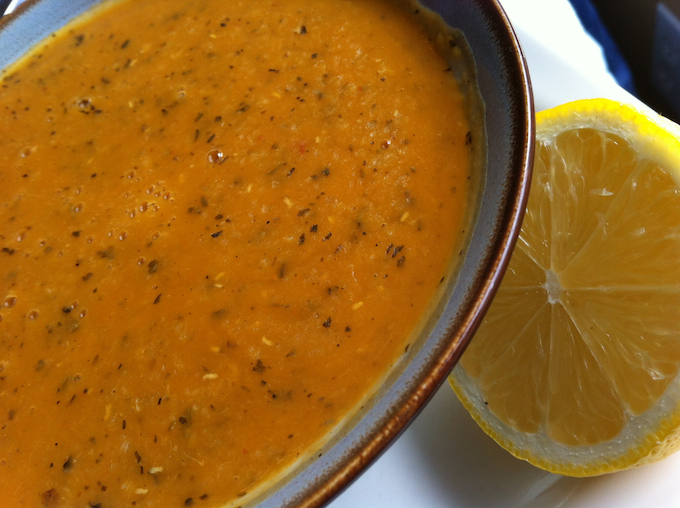 The Salad Sampler contained three salads consisting of white beans, chickpeas, and a shepherd salad. The plate was icy cold as were the components of the salads. It was very fresh in addition to being refreshing with the chickpeas, diced red onion, parsley, dill, and mint. I would have welcomed this as a complete meal in a bowl with a big piece of Turkish flatbread. 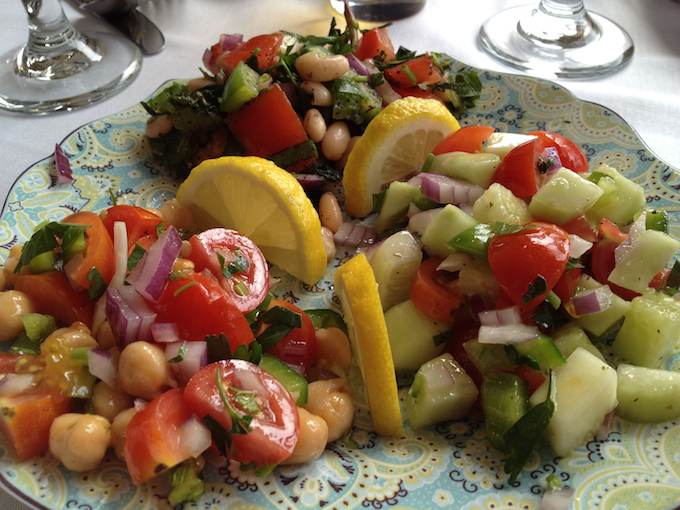 One plate that arrived at the table which was not ordered, but we decided to keep, was called Ezme. This was delicious. It is a mixture of finely chopped vegetables, which is then blended with a pepper paste. Also incorporated is tomato paste to provide richness, then finished with pomegranate molasses & olive oil. This is just the right amount of spiciness with a touch of sweetness, and would go well over grilled meats, calamari, or simply be a fabulous dipping sauce for great bread. 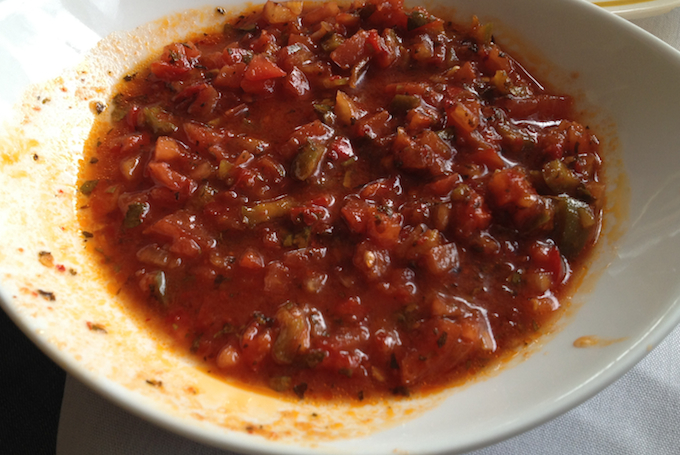 The Mini Hot Appetizer Sampler consisted of two rounds of golf ball sized falafel drizzled with a flavorful and thick tahini. The falafel was nicely seasoned. The parsley and mint combination gave a fresh boost to a fried appetizer. Next on the plate was Sigara Borek, which is a cigar-shaped phyllo dough, stuffed with melted feta and parsley. Finally, A Zucchini Pancake, which is comprised of grated mixed vegetables and then pan-fried. As a standalone, something was missing. The pancake looked appetizing and had a nice crunch and bite to it. It lacked flavor. Upon looking at the regular menu, I noticed that it is usually served with a yogurt and fresh tomato sauce. This was not the case here, and would have benefited from such. 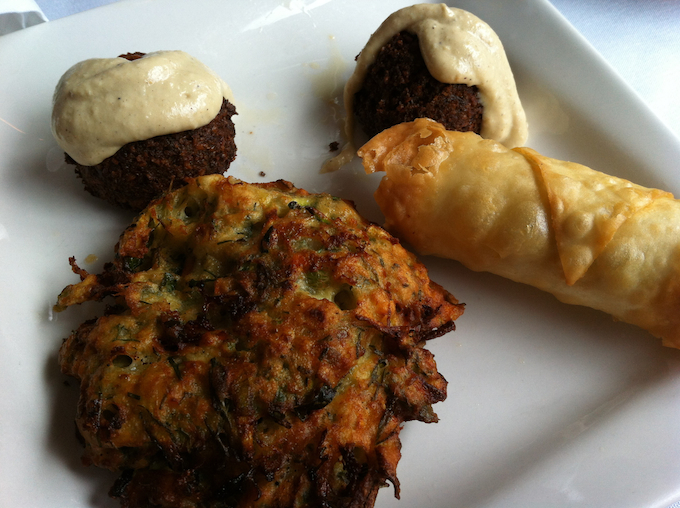 The Mussels with White Wine was a surprise as it arrived in a tomato broth. Although this dish was “different than advertised”, it was quite superb. The mussels were just the right size and tender. The sauce was quite tasty and had one friend at the table spooning it onto Basmati. Nobody complained. 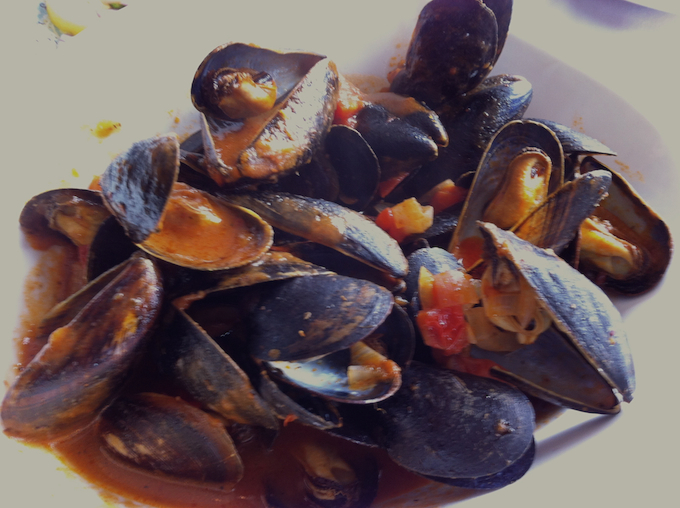 Although the word Meze means “small plates”, Main Course dishes were quite substantial.  Therefore, you will not walk away hungry from Turkish Meze Restaurant. The portions don’t seem overwhelming; but cumulatively, the dishes are quite filling.

The Eggplant Musakka is topped with cheese. Inside, it is layered with thin slices of grilled eggplant and finely minced lamb, in addition to béchamel. Basmati rice is served alongside the Musakka. Personally, I’d prefer this plate without the cheese, which was a bit much; but I ate my way around it and took a nibble of it as desired. 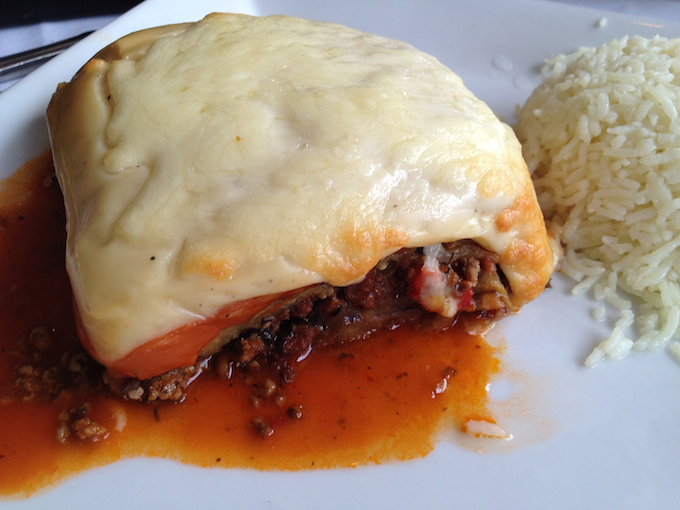 The Mixed Grill Platter was a good choice in order to taste across multiple selections. The chicken kebab is appetizing in color with slight chargrilled marks and deep red shades of roasted spices. The kebab pieces were mostly moist and the seasoning components provided a nice depth of smoky complexity, and flavor. Shaved, vertically grilled lamb (think gyro meat) was in the center of the plate. This was overly salted and was left behind. Also, there was a “lamb burger” patty – – nicely spiced but cooked to medium well. This would have benefited from some accompanying sauce or to be cooked to a lower temperature. The “rice” on the plate was red and oh so wonderful. We then realized it was bulgur. Everyone was digging into that – – making it wonderful to try something not usually offered as one dines out. I always like it when we awake to a rarely used ingredient and done so well. Also on the plate were greens and a wonderful little mound of pickled cabbage. 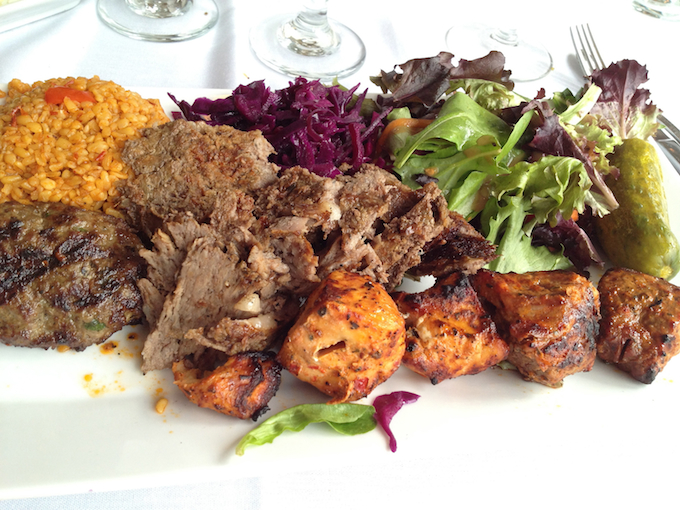 The Turkish Style Lamb Sauté had us wishing that this beautiful dish had been seasoned. It showed such promise in presentation but fell flat in flavor. 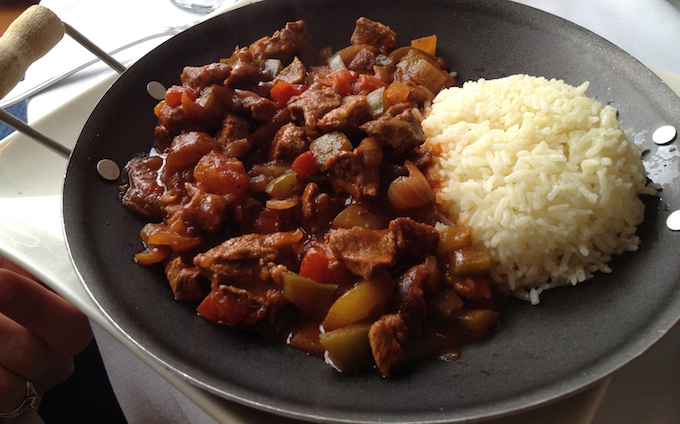 The piece de resistance, however, was dessert. So simply plated were a slice of baklava with such fine layers of phyllo and pistachios throughout. It was drizzled in syrup, which presented with hints of honey. 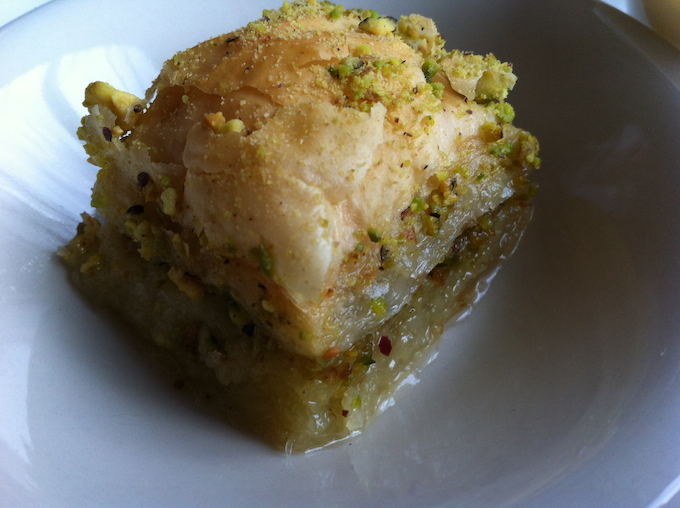 Next were two puddings in small plastic cups. The first was a rice pudding with perfect texture and temperature with just a kiss of vanilla on the palate. Then, brace for a throwback to childhood, if your grandmother ever made homemade chocolate pudding. If not, seize your opportunity now. 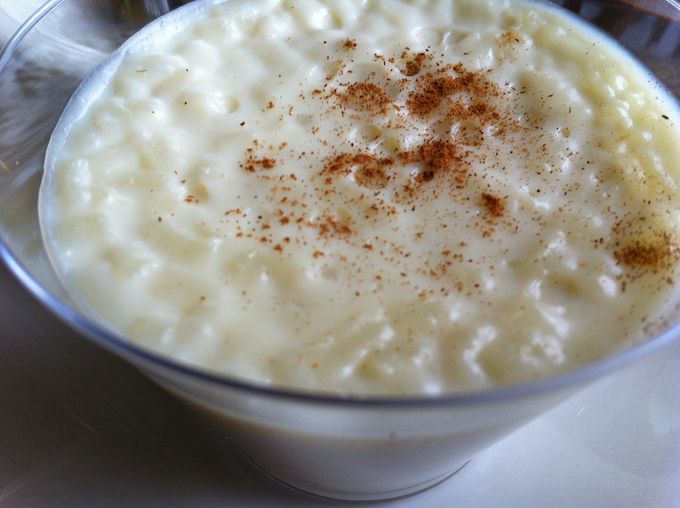 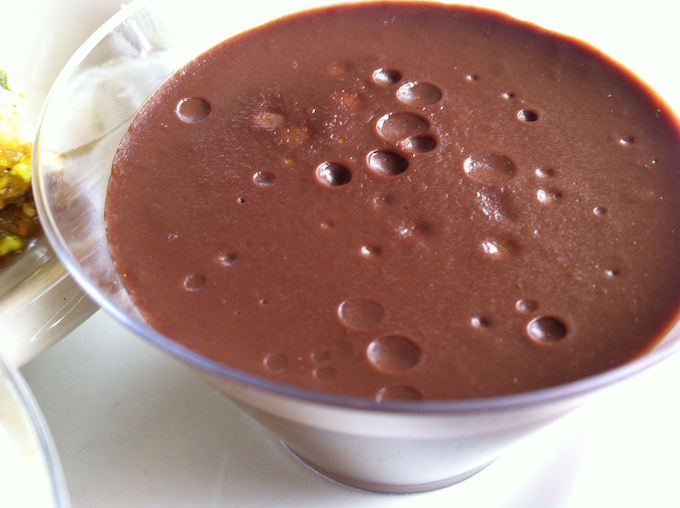 Turkish Meze Restaurant in Mamaroneck is a charming find and does not break the bank while providing the opportunity to experience a Mediterranean cuisine not readily found in every community. By the way, it is a short walk from the Mamaroneck train station.