What a great  excuse to visit the quaint village of Cold Spring.  With its streets lined with eclectic shops, and Hudson River views, it’s a very easy place to to find an excuse to visit. Then of course, there’s Cathryn’s Tuscan Gill tucked away down a little garden path that opens up to four richly decorated and very comfortable rooms.  I visited with a friend – we were hoping to get there a little earlier (for better photo lighting) but ended up having a late dinner thus leading to the only unfortunately dark photo. 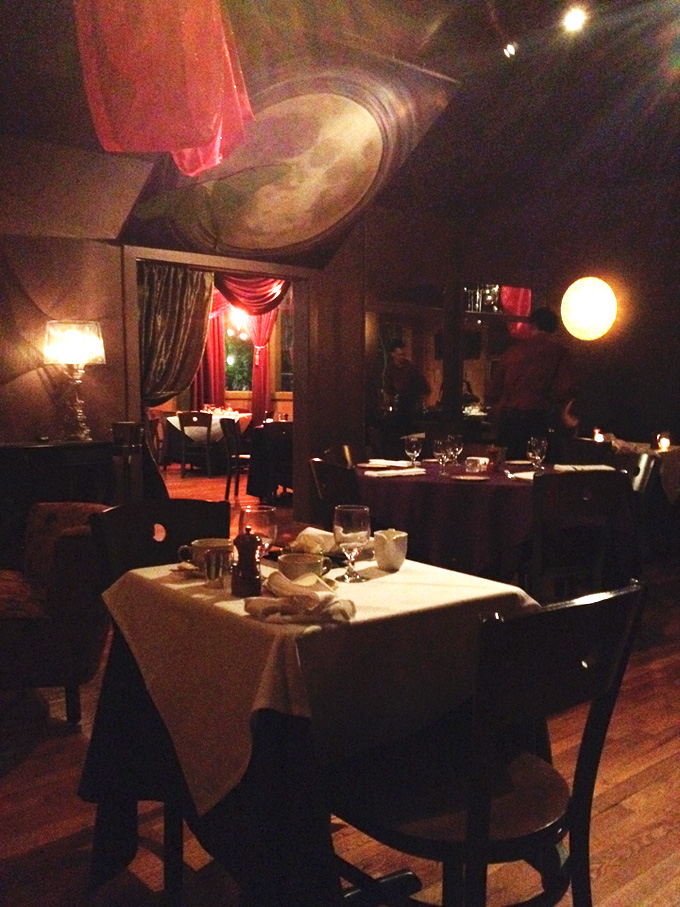 The restaurant was quite busy on this Thursday night, with people sitting at the bar, tables and the great lounge area.  The location of the lounge area was new to me since the last time I visited – the first sign that it had been too long between visits. The lush couches were previously in the front of the restaurant though the new location makes perfect sense.  It readily invites you to sit with a drink and relax a bit before dinner – a very nice way to start your meal.

Having eaten at Cathryn’s several times before I felt a little surprised by how meat and game heavy the menu seemed (this of course, from a vegetarian’s perceptive – any carnivore would be very pleased with the selection and variety of meats).  I don’t remember having a hard time selecting a meal previously though this time I did.  Finally, we both decided to start off with the Insalata Gloriosa which was a lovely mix of romaine, asparagus, avocado, corn, hearts of palm, and green olives that was delicately dressed. The lettuce was very fresh and crunchy and the supporting ingredients were plentiful which I really like in my foods.

For our entree we each opted for Pasta dishes.  I had the Fettuccine ai Fiori di Zucchini made with fresh fettuccine, zucchini flowers, currants, pignoli, and anchovies. I asked to have the anchovies left out which might not have been the best culinary decision I ever made because I can certainly see how the anchovy flavor would have lent itself to a richer flavor profile.   In retrospect, I also realized that the zucchini flowers were left out too! I confirmed this by checking the very dark image I had of the dish.  Very unfortunate omission as that was the impetus for my ordering this particular dish.  Our conversation must have been so compelling that I didn’t even notice at the time!  At first blush, I was a bit taken aback by the taste of the sweetness from the currants against the savory garlic but then it began to work and work quite well. I can only imagine how much better it might have been with the zucchini flowers and yesm even the anchovy.  Now of course, I’ll have to go again soon to try it as it should have been with both of the missing ingredients.

Dorene had the Orecchiette con Gorgonzola e Noci, lovely little ear shaped pasta with walnuts and Gorgonzola cream sauce. We were musing before our entrees came that her dish might be heavy but we were both very surprised at how light it actually was. Very delicious without the heavy-ness that soemtimes comes with cream sauce. I’m not quite sure how that was accomplished but it was a great success. The large pieces of walnut added a great texture to the creamy Gorgonzola sauce which was excellent.  Yes, I wanted to snatch her food but I refrained, settling instead to nibble up the few pieces she did not finish.

Service was interesting, we seemed to have two different people waiting on us at various times with totally polar affect.  One being charming, and conversational the other being much more the quiet type.  We had a long lag time between our salad and entree which certainly worked for us, making it a nice leisurely meal.

After our pasta dishes we unfortunately had no room left for dessert which again, leaves me feeling another visit is in my near future.  It’s also worth mentioning that Cathryn’s serves Brunch from noon to 3:00 on Sundays with dishes such as Crostino di Uova alla Cacciatora, sunny side up eggs with fresh tomato-porcini mushroom sauce served over toasted country bread, with pan-roasted potatoes  – yum. 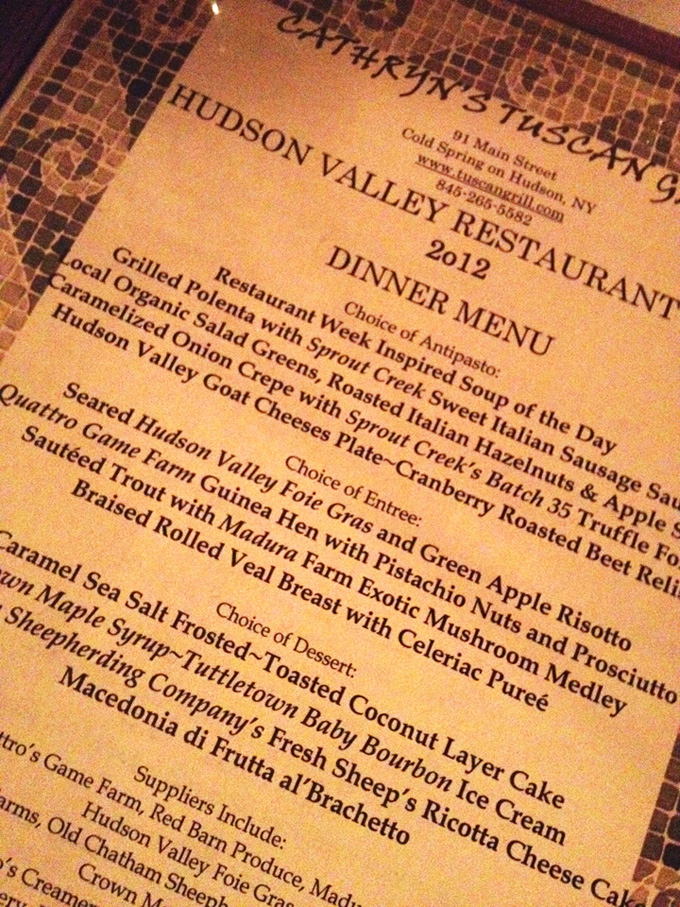