David and Brandee Dallow, your WestchesterFoodies, here to tell you about Meritage Restaurant in Scarsdale. 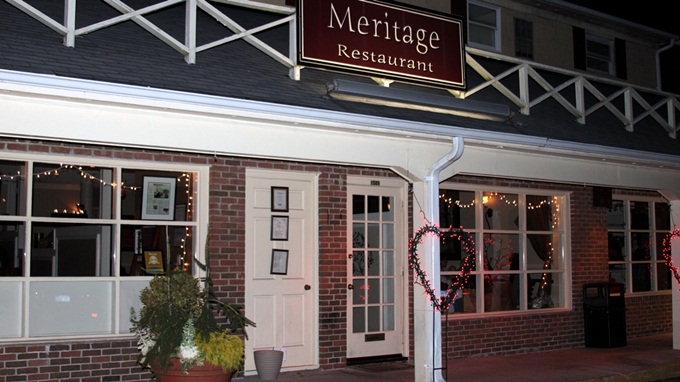 It hadn’t occurred to me that this was the second year in a row that I’d be reviewing an Italian restaurant for HVRW until the evening of our dinner. Smarter people than I will grab a reservation at a steakhouse, a place where they charge $18 for creamed spinach without apologizing, but not us. Meritage did, however, have a major upside: I could probably throw a tennis ball from my house and hit the place, a convenience I appreciated given that our reservations were for a Monday night! Tucked into an upscale strip mall, its proximity is probably why I’d never been. It was always too easy to say I’d get there some other time.

Lest the phrase “strip mall” add any sort of stigma, let me assure you that once you enter the location becomes moot. A small bar area quickly yields way to a candlelit dining room. The tastefully appointed room maintained the perfect level of brightness, dim enough for intimacy, but not so dark as to be squinting at your menu. Wainscoted walls led up to small ledges created by elegant moldings which held the aforementioned candles, their flickering lights casting lovely shadows across the table. Seriously, whose appearance doesn’t benefit from candlelight? The lovely artwork adorning the walls was no afterthought, but rather seemed to have been chosen by someone with a real eye for art.

Upon being seated we were given Restaurant Week menus as well as the regular restaurant menu. I was a bit surprised at the brevity of the Restaurant Week menu. This is only my second year participating, so perhaps my expectations were unrealistic, but there seemed an aggressive lack of options. There were four appetizers as well as a soup, five entrees and two desserts. I found this particularly surprising as this was an Italian restaurant and my understanding has always been that pastas have the highest profit margin. There were only two pasta choices available. Why not bulk up the menu with a few more? That petty griping aside, there were intriguing offerings to choose from. FoodieWife, a sure bet to order a salad, looked past a pleasant sounding pear salad with candied walnuts because the other option was a beet salad with goat cheese mousse, pistachio, baby greens and cider vinaigrette. 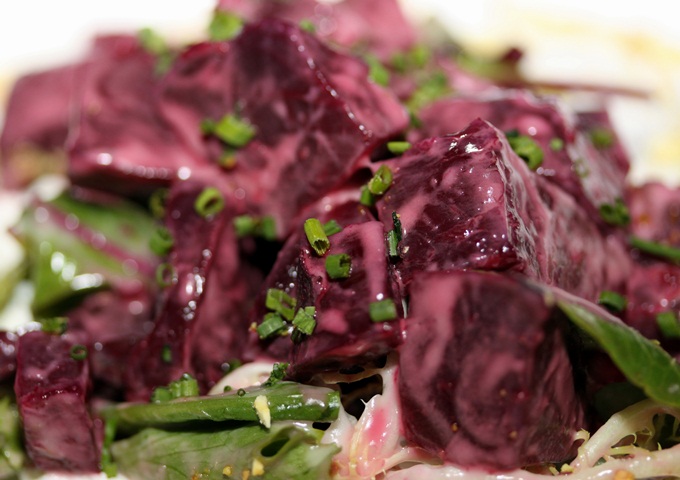 FoodieWife has never met a beet salad she didn’t like so this was a forgone conclusion. That said, this happened to be an above average beet salad. The mild citrus dressing had just enough acidity to offset the sweetness of the beets, the creamy goat cheese doing the same for the vinaigrette. The baby greens were tender and tasty while the pistachios added a needed crunch to the texture as well as a nutty flavor.

One of the appetizer options was a choice of any two of four small plates. I looked right past the marinated artichokes and roasted red pepper, eschewing the empty vitamins and minerals, instead choosing chicken liver crostini and prosciutto and gruyere panino. 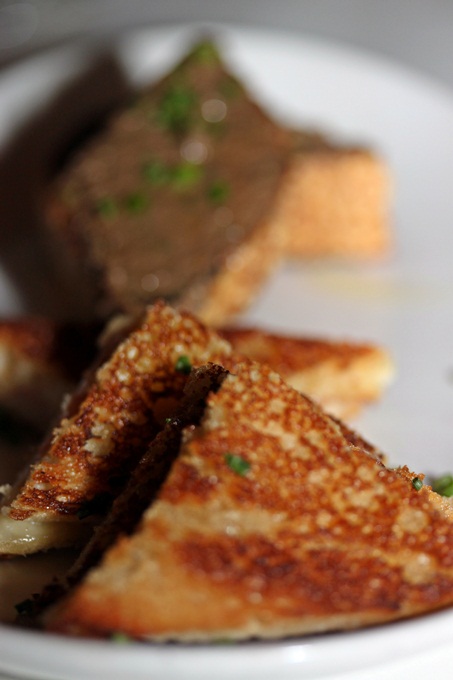 The panino was, essentially, like the best grilled cheese you’d ever have. Each crunchy, buttery bite giving way to melty cheesy goodness. The nutty, woodsy flavor of the cheese worked in beautiful harmony with the porky prosciutto. Each bite tasted a lot like what I’d imagine a cardiologist’s tears to taste like. And then I got to the chicken liver crostini. 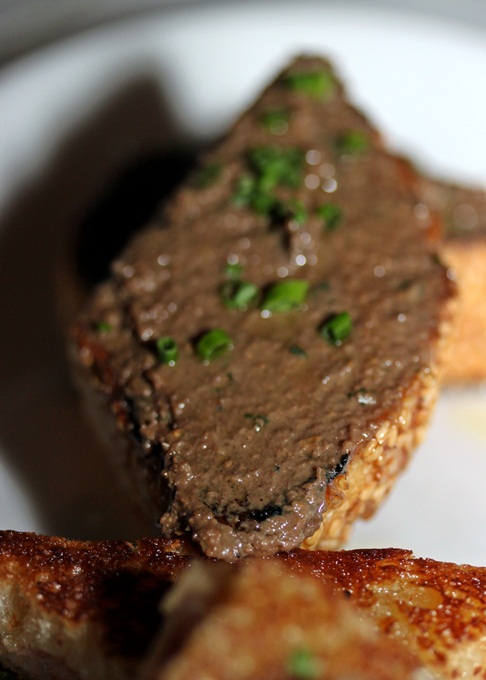 This small bite was pure luxury, silky but without the overpowering funkiness often found in organ meats. This was an elegant presentation of a rustic dish.

FoodieWife and I could live on pasta, but oddly we overlooked past the two offered. Both were taglietelle, one in a tomato cream sauce for vegetarians and the other with a meat ragu for the normal people. Even tougher to pass up was a duck confit with white beans, pancetta and caramelized onion. Normally this would be right in my wheelhouse but, as I was already considering ordering angioplasty for dessert after my incredibly rich appetizers, I passed on that as well, opting for the far lighter Grilled Brook Trout, shaved fennel and apple, pomegranate and lemon. 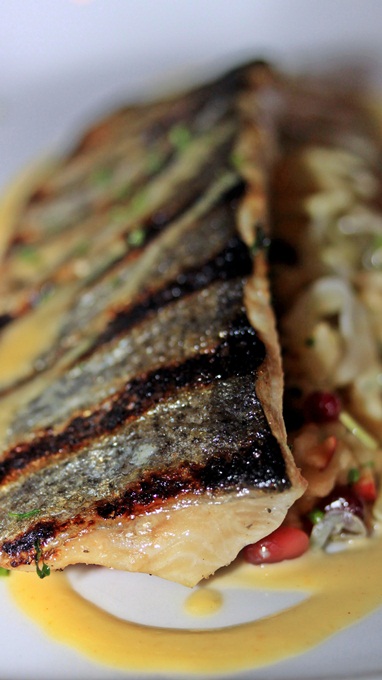 After the richness of my appetizers this entree was……well, just what the doctor ordered. Satisfying while being almost ethereally light and refreshing, it was as close to the perfect choice as I could have found. Well cooked trout, with crispy skin and beautiful bits of char, sat atop perfectly balanced slaw of fennel and apple. The lemon added a pleasing acidity while the pomegranate seeds provided small but intense bursts of flavor.

FoodieWife ordered what was listed as Pan Roasted Chicken. 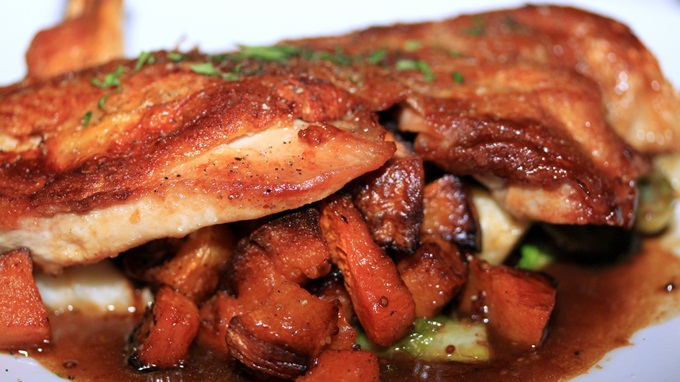 It actually resembled chicken cooked under a brick, flattened with incredibly crispy skin. Cutting through the crackling skin to be rewarded with chicken that was still tender and juicy was sublime. It was served with Brussels sprouts and butternut squash, two of my favorites, which were easily overshadowed by a fantastic potato puree.

Though we’re not normally dessert aficionados, preferring instead the savory portions of meals, we each ordered one of the (only) two offerings. The first was a Chocolate Bread Pudding served with homemade vanilla ice cream. 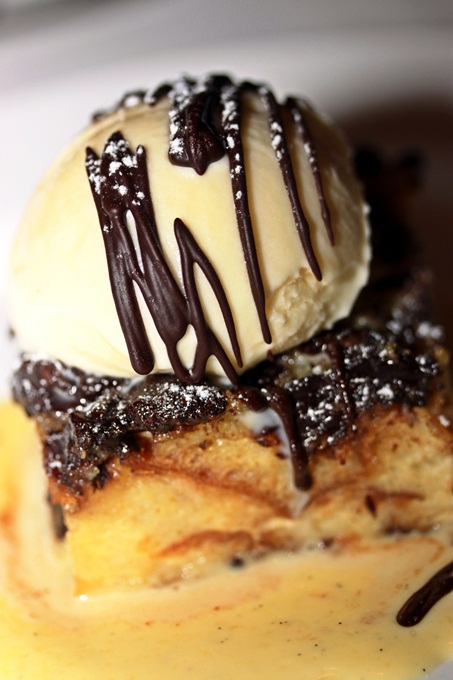 It was quite good, the chocolate shell cracking to yield vanilla ice cream, which in turn led down to a soft bread pudding with a slightly hardened, chocolatey top. The second dessert was a Hazelnut Poundcake, served with strawberry sauce and, again, vanilla ice cream. 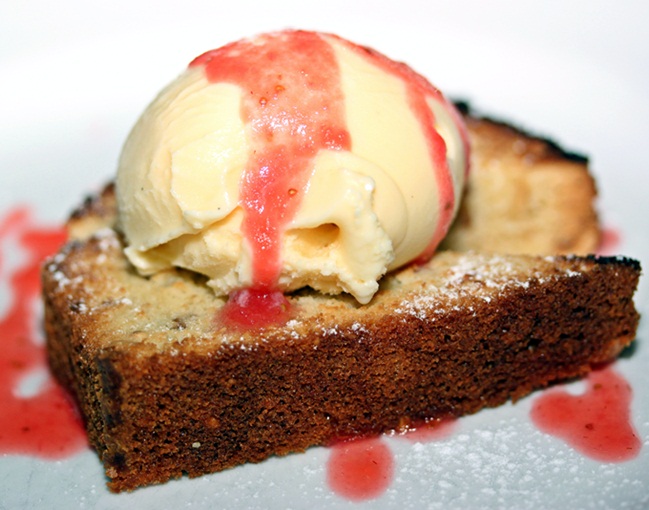 This too was enjoyable but the repetition of the vanilla ice cream got me thinking. Both salad appetizers featured the same dressing, both pastas feature taglietelle and  both desserts utilized vanilla ice cream. The repetition may not have been as noticeable had the Restaurant Week menu not been small. All the food was very good, well prepared and beautifully plated. I’ve always felt the difference between good restaurants and great restaurants was in the details. Being a part of Hudson Valley Restaurant Week has gotten me swept up in the spirit of the event, I would have like to have felt a bit more of that from Meritage. That said, everything I ate was certainly good enough to warrant a return visit!