Hi everyone, it’s Michelle (and her boyfriend Mike) again! For my second HVRW 2012 excursion I was excited to try out Caravela in Tarrytown, especially since Mike had been a few years ago and had had a distinctly positive experience. 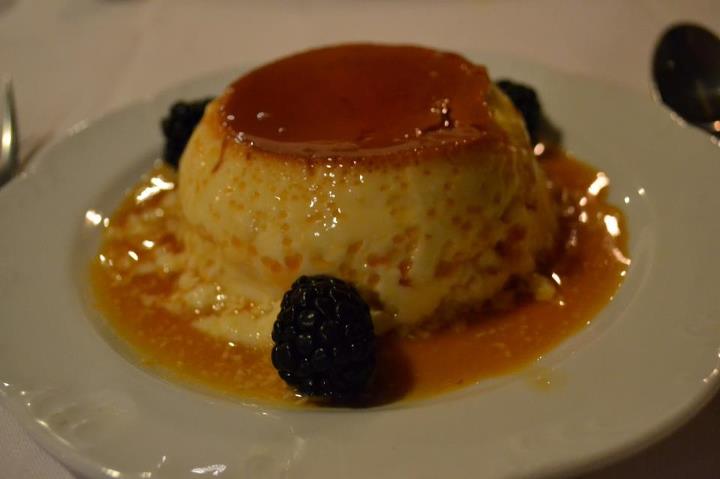 We had 7pm reservations and were seated promptly by the hostess, though our table was crammed in so tightly between the two larger tables in front of and behind us that the only way for me to fit was with my chair at an angle the whole night (and at 5’2 and 100 lbs I’m definitely petite!)

The dining room was filled to capacity with mostly well-heeled older couples, many of whom seemed to be regulars. The décor—replete with wood paneling and low lighting—was intimate, while also a somewhat disconcerting throwback to the 1970’s.

Upon opening our menus we noticed that they were the regular Caravela menus and not the Restaurant Week prix fixe specials, and were told that those menus had to be specifically requested—something to make note of, given how pricey Caravela is normally!

A quick note: I know that when one is reviewing a restaurant, food should be what is primarily taken into account. Unfortunately, our experience at Caravela was so colored by the poor service we received that it was impossible not to take that into consideration.

That being said, here’s what we had to eat:

The bread, while warm, was rather dry, and by the end of the meal had gone completely stale.  The complimentary charcuterie was quite tasty however—mild and smoky without much spice, and the black olives were served in a drizzle of olive oil that left them very juicy and with a nice tangy finish that complimented the wine well. A glass of house white, though it had a dry aroma, was surprisingly smooth and mellow. The house red was somewhat opaque with a light fruity finish. While disappointed at first, we found that it paired well with a few of the dishes we tried.

We each ordered a soup to start. I had the butternut squash soup which was a delectable blend of sweet and savory, with just a touch of spice to keep it interesting. Mike had the Portuguese Potato soup and had this to say about it: “Where do I begin… Well, I feel obligated to mention that there was a thick layer of skin on my soup – this is result of the fats in the soup rising to the surface, cooling, and then congealing. To the untrained eye that might mean nothing, to me, it means my soup was left out for a while before it reached my table.” 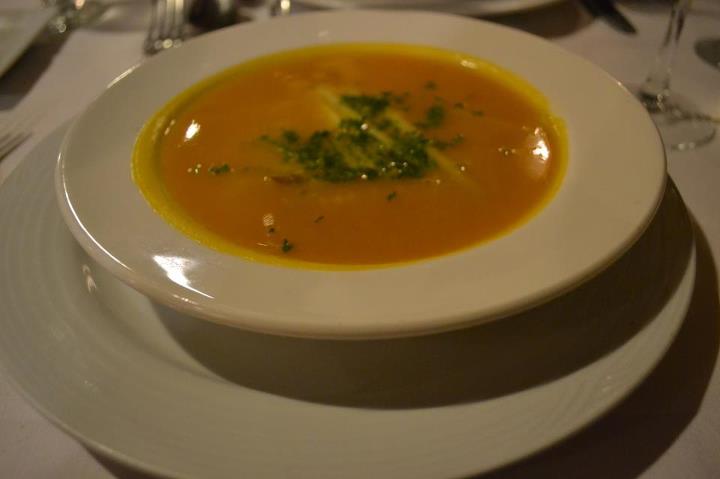 “Next, I want to mention that in very fatty soups a skin will retain the remaining heat. Why is this important? Because just like fire, soup can be scalding hot and my poor palate found this out the hard way. After a sip of the house wine vanquished the flames in my mouth, I decided to take a step back for a few minutes and let the soup cool. When I returned to it I found it to be rather enjoyable – it has a subtle smoky base with strong meat overtones, very similar to the sausage which is served as an appetizer. Unfortunately, it was not a very complex dish and I have a sneaking suspicion that most of the subtle flavors which tend to be found in higher end soups were burned out of this soup. Was this long description necessary? Obviously no, but I believe it demonstrates just how little attention the chef gave my meal. I can earnestly say that this is a dish you would not miss since you get roughly the same sensory experience from the charcuterie; sans the scorching part.” 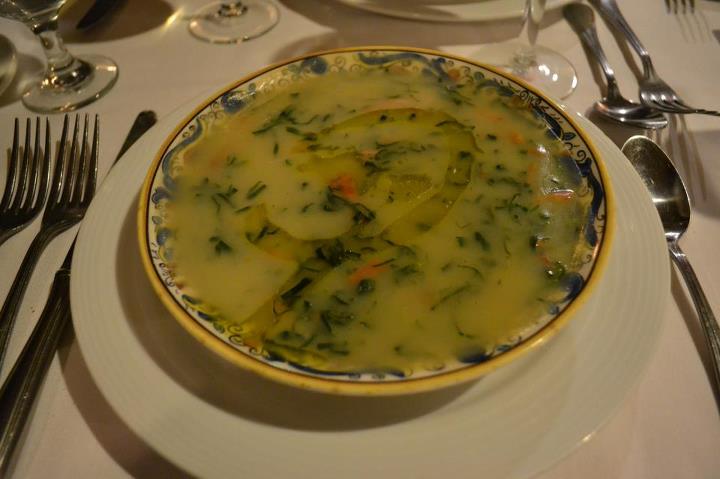 Mike ordered the Petite Filet and said: “While others truly value a rare steak, I ordered this medium rare. Could I send it back? Not really, since it was already covered in a sauce reminiscent of stew. The meat was lightly seasoned and was not aided by the addition of salt or pepper. It was at this point, the moment I was looking forward to since my last visit to Caravela, when I had had a steak that was mind-blowingly good, that I truly became disappointed in the turn the evening had taken.” 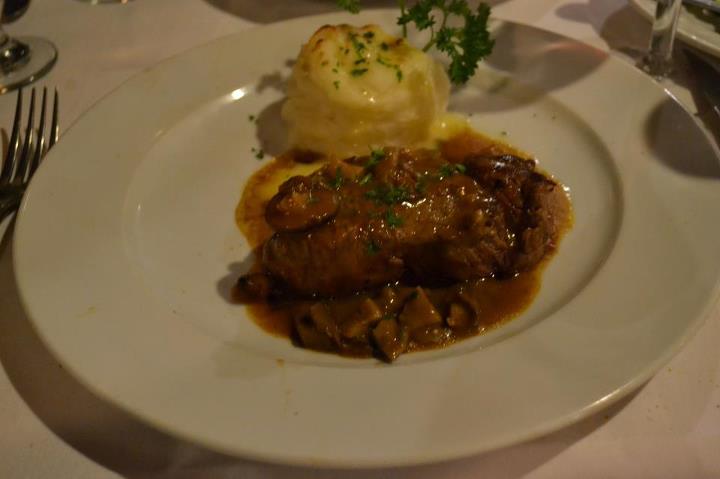 I had the Lemon Sole Casserole, which was a somewhat soupy medley of seafood with a crumb topping and roasted potatoes. The sole melted in my mouth and the potatoes were quite tasty, though nothing was truly exceptional about the dish, despite seafood being Caravela’s specialty. 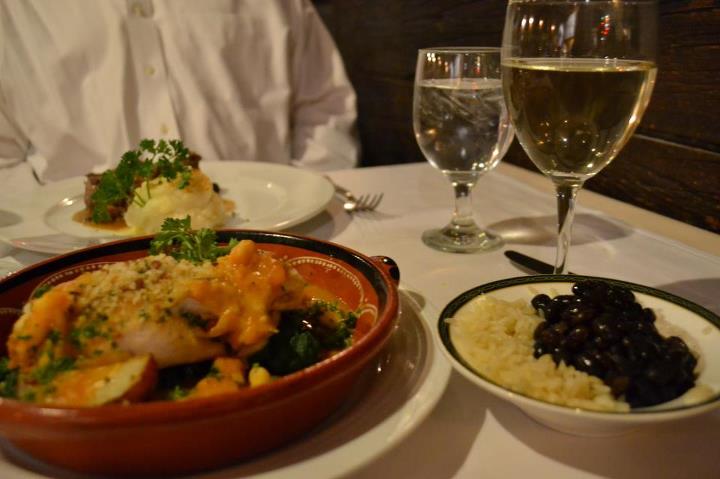 My caramel crème flan was delicious—light and creamy with rich, almost bitter, caramel sauce. Mike had the Molotoff, which according to the menu is “a traditional Portuguese baked meringue, toasted almonds and brandy-caramel sauce” and was bursting with almond flavor. 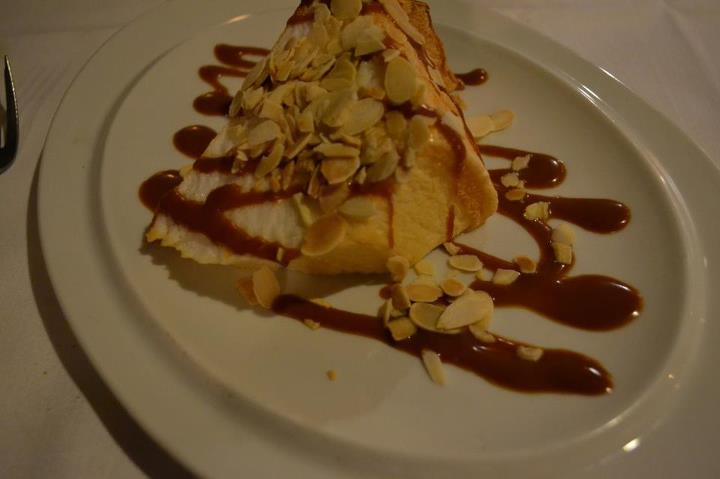 In a nutshell, not so great. Throughout our dinner we were ignored by staff; items were placed on our table as a waiter prepared another table even though a service tray was only a few feet away; a waiter asked if we were finished and then proceeded to pass back and forth three or four times before coming back to clear our table; our desserts were forgotten about initially; our check was delivered while we were still eating dessert without us requesting it (the distinct impression being they were trying to turn over our table, despite the fact that older couples who had been well into their meal when we first arrived, weren’t bothered), and finally, the hostess didn’t wish us goodnight as we left.

We understand that restaurants work hard to provide tasty and affordable prix fixe menus—and one of the great things about Hudson Valley Restaurant Week is that it does make so many restaurants affordable that might otherwise be out of the price range of a younger demographic. That being said, our money should be worth the same as any other couple’s to the establishment, and our age shouldn’t affect the quality of service we receive.

With so many restaurants to choose from during Hudson Valley Restaurant Week, I would unfortunately think twice before opting for Caravela.