This is a bonus review by Donna Monaco Olsen and Bradley Olsen. Aurora is one of a group of restaurants owned by Z Hospitality Group.

We felt we just had to tell you about the pleasant lunch we had at Aurora last week. We felt it was important to report on this restaurant as they offer daily a 2-course special for $14 which includes many choices for both appetizers and entrees. What a find, as it is beautifully decorated with a sleek but warm and inviting Tuscan colored flare.  Although a bit noisy in the open spaces, they have incorporated ceiling moldings that are concave and absorb (or try to keep up with) the sound of the happy patrons.

We were happy to have with us Donna’s parents, cousin and Auntie Mae. Last year they also joined us and wished again to participate to help us review.  We were pleasantly surprised by the many choices and some of us opted only to partake in the two courses (having eaten dessert way too many times in two weeks).

There were many appetizers to choose from. Here are the two different soup choices including a springtime asparagus and escarole and bean both with a nice flavor and made dairy free (pictured after Parmesan added). 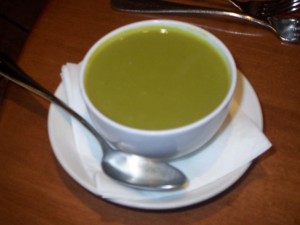 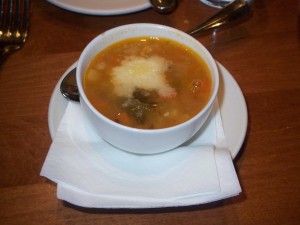 We were prepared these past two weeks to taste each incarnation of beet and goat cheese salad as we had last year but to our surprise it was not offered on many HVRW menus. This however may just be one of the best adaptations of this famous duo we have tried thus far. The goat cheese resembled a blintz (for those of you who know what that is). It was soft and warm on the inside and flaky and crisp on the outside (possibly fried phyllo dough?). The menu described it as a “fritter” but is was so much better than a fritter… The small cubes of purple beets are hiding under the arugula leaves. 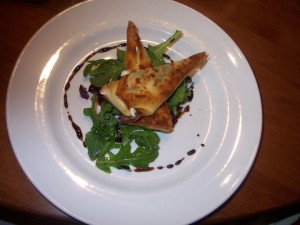 Bradley who is not normally a beef eater has tested many a hanger steak in the past two weeks, now ordering it rare for maximum flavor. This was a lovely plate with a refreshing salsa verde. The pomme frittes could have been crisper but all in all a nice lunch choice of the sixteen offered.  The grilled or pan-fried (our diners tried both versions) chicken Milanese with mozzarella balls (the tiniest we have ever seen), arugula and tomatoes was a favorite. It was so light that it appeared almost refreshing. The chicken “scarpariello” with sausage bits over linguine was ordered with the hot cherry peppers on the side. Although it was not served on the bone in the traditional way, it was still the most flavorful tried thus far. Each diner liked what they chose and all were satiated by meals end. 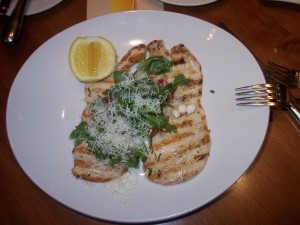 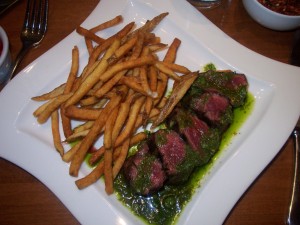 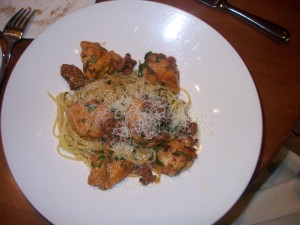 Desserts were not the star here but only half of us ordered one. Dad got a kick out of the tilted plate his sweet mango sorbet arrived in. The sticky toffee pudding was a bit dry but with good flavor. The chocolate lava type cake arrived delayed and was a bit underdone (even for lava cake) and was floury on the outside giving it an unappetizing appearance even for the chocolate lovers at the table. We were not as much a fan of the sweets as we were the meal. 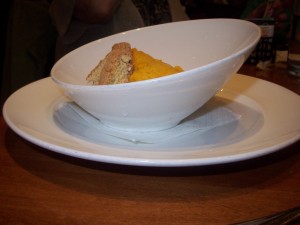 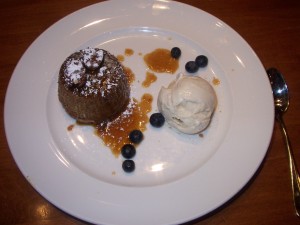 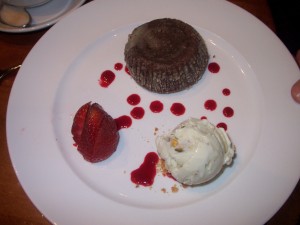 The service was okay and the manager was interactive with the patrons. We lingered as long as our metered parking would permit as this is how it is with most of the town of Rye. They are located in downtown area, on the bustling main street. Take a walk to see all the pretty shop windows along the avenue.

Enjoy a price fixe lunch even after HVRW has faded away.

Until we meet again next year! Happy Spring!