In all, the duo of  Donna Monaco Olsen and Bradley Olsen have experienced close to 10 restaurants during these past two weeks while dining with family and friends, and Mima Vinoteca in Irvington was one of the favorites.

This time was with Bradley’s 80-plus mom, Patty, who resides in one of the “River Towns”. Here was our account of our mid-week HVRW dinner at this local spot.

And we are so glad we did. It was terrific! We set out for dinner after an 11-hour shift, which included a decorating class for Westchester Community College. (Donna is the Co-coordinator for the Taste of Westchester Continuing Ed program. Check it out at www.sunywcc.edu/continuing_ed/courses/taste.htm.)

Mima’s is a quaint little spot. (It used to be The Red Hat before that moved to the river). The interior is rustic with an old general store or french bistro kind of feel to it. The old-fashioned beehive patterned tile floors and tin ceiling, which are prominent in the dimly lit space, are both comforting and warm. We sat in the front room, but there is another room further back that was quieter but without the same romantic decor. They also have a table that seats 10-12 in a hide-away across from the bar. The joint was buzzing, although some tables were not, full but it was a nice feel. The service was very attentive and explained the offerings of HVRW and the regular menu. They were patient and kept the water flowing. The bread is served with a nice olive oil carafe and salt. 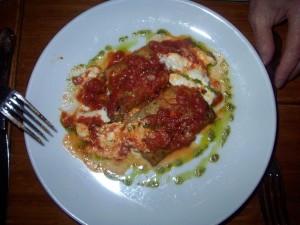 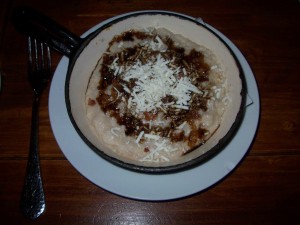 We enjoyed the light-tasting eggplant rollatini with ricotta, mozzarella, san marzano pomodoro and basil oil. The tomato sauce was full of flavor and the pesto drizzle was just enough basil to make it a lovely springtime dish. The chestnut polenta with crispy pancetta, balsamico, and ricotta salata was quite interesting and served in a cast iron skillet. (Sorry. It was dark in there for photos).  It was good but second to the eggplant dish by far.

Out to test this dish again in a different restaurant, the gemelli with a farm fresh egg, black pepper, onion, and smoked bacon (usually known as cabonara but not billed as such) was a great adaptation of this type of comforting offering. Although usually a heartier dish, this version was very light in texture and not laden with heavy cream (as the true recipe does not contain any cream and is thickened by the incorporation of the egg yolk into the warm pasta). 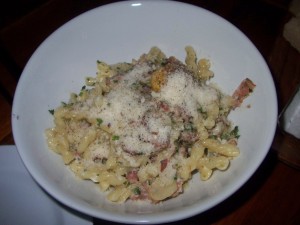 The organic chicken scarpariello served with shitake, pear tomato, baby carrots, and fingerling potatoes was an earthy offering and a very rustic version of this common dish. It was a half chicken in pieces with a lovely brown sauce that enhanced the skillet cooked chicken. Usually this dish is made with sausage and vinegar peppers. This was a more country or peasant type version. Our only critique would be that the potatoes should have been crisped and added at the end. The portion was grand as were the flavors even when the leftovers were reheated at home and enjoyed again. 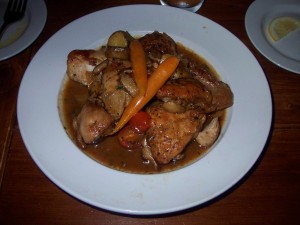 We decided to try one of each of the dessert offerings. Over the past two weeks we have had many versions of Tiramisu and bread pudding as they are easy to make in large quantities and then cut in squares. Both of these were served individually plated and not cut from a mass. The Tiramisu was somewhat deconstructed with coffee liqueur-soaked lady fingers and marscapone creme strewn on top. Maybe not as pretty as it was delicious. The banana walnut bread pudding was a bit drier than we like to see in a bread pudding, although it was served with vanilla ice cream and caramel. The true winner of the group was the torta di cioccolate with an espresso chocolate ganache topping. Rich, dense and dreamy with a delicious cappuccino. 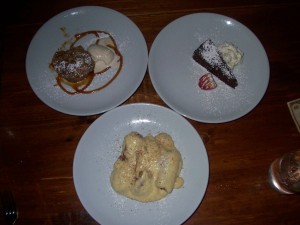 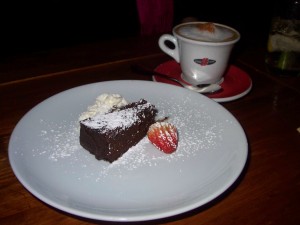 All the items on the special HVRW menu were present on the regular menu. This was good to see, as we would like to repeat many of our selections soon.

This just might be the  “go to place” that we have been searching for. Thanks Mima!