Sharon Pickett here again, this time reporting from The Peekskill Brewery. My companion and I decided to visit for midweek lunch and take advantage of Hudson Valley Restaurant Week offerings.

The restaurant is housed in a nondescript L shaped building near the Peekskill waterfront. The main portion offers tables for groups and families while the other features a large bar, high-top tables, several wide screen televisions and a dart board.  The same menu is available in both areas. Connecting the two dining areas is the glassed-in brewing area where visitors can watch as brew master Jeff O’Neil, formerly of Ithaca Beer Company, works his magic. O’Neil usually offers nine different brews on a rotating basis.

The menu offers some of the usual – burgers, hot dogs and fish and chips; as well as the more unusual – Scotch eggs, oysters on the half shell and Cubano sandwiches.

We opted for the Restaurant Week menu. Offered as an option was a pairing of three house beers to accompany each course selection (yes, even a dessert beer was offered). I chose the smoked trout chowder for starters while my companion chose the charcuterie sampler. Our entrée choices consisted of homemade curried lamb sausage (for me) and the ricotta and Swiss chard gnudi for my companion. I
selected the berries and goat cheese mousse while my partner opted for the sticky toffee pudding. It being lunch we passed on the beer pairings – maybe next time.

The chowder arrived with a wedge of toast spread with a tangy horseradish cream – the perfect foil for the rich chowder. My only complaint was the over abundance of potatoes. The charcuterie tasting was a nice mix of flavors and textures. 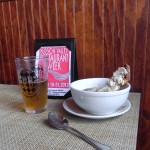 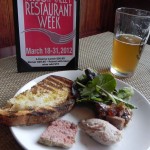 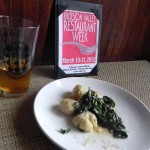 The berries were fresh and luscious and the accompanying shortbread biscuit played well with the tart goat cheese mousse. Toffee pudding was served warm and was a tasty end to the meal. 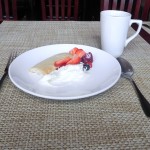 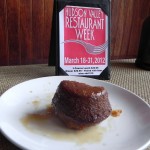 Besides making their own sausage and cured meats, The Peekskill Brewery sources local ingredients such as greens, chickens and goat cheese.  The menu changes seasonally, reflecting what is fresh and at its peak.

Our waitress explained that, in order to increase brewing capacity and improve dining space, the establishment will be moving across the street to a larger facility in the summer. The Peekskill Brewery is accessible by Metro North Hudson Line, Peekskill station.